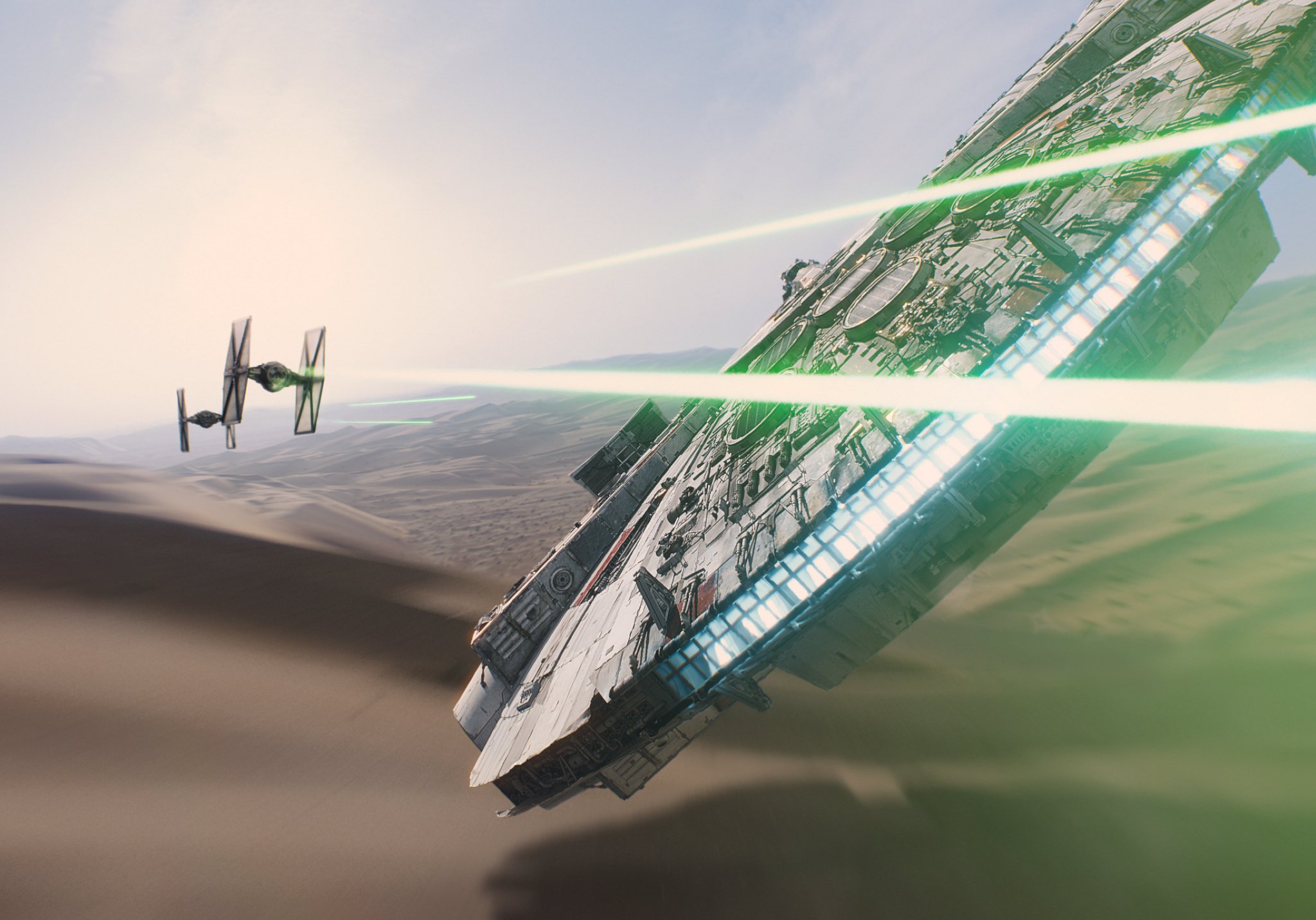 Persuasive Writing and a Conversation with an IMAX EVP

Persuasive Writing and a Conversation with an IMAX EVP

I love meeting new people. I love talking to new people. I love learning from others and dialoguing about ideas and philosophies. Sometimes, when I tell others who I’m talking to on the phone and chatting with via email I get this sort of RCA dog look from them, and usually a question something like, “How in heaven’s name do you get these random people to talk to you?” And I sort of laugh to myself, a little surprised myself that others would even respond to my reaching out to them. But then I realized something… and I figured I’d tell you about it by way of a story about an interaction with someone I had no business talking to.

So, JJ officially came out on record as saying, THE RIGHT way to see The Force Awakens is in full 70mm IMAX negative. Specifically, he said, #bestformatever… look, I’ll show you specifically:

A year ago, it was originally thought that the entirety of the film was shot in the 70 neg because of this instagram post. But it later came out that JJ only shot one (albeit significant) scene in the larger negative. Regardless, JJ clearly specified that the way to see the movie, the best way, was in IMAX. And later, we realized that the entire Millennium Falcon escape from Jakku scene was going to be shown, maxed, and full. But here’s the kicker, what he meant… He MEANT, watch it in the “true” eight-story IMAX theaters, which will present the full 70MM sequence, while the “shrunk” IMAX theaters will play the Digital IMAX converted format.

But when I got in line at the nearby IMAX Cineplex, 14 hours in advance, so I could get a good seat (without needing a chiropractor), I was following orders! I was there because JJ told me to!  (Ok, so I also think IMAX is also the greatest viewing experience regardless of the negative, (best sound, best screens, seats, etc) which comes up later.) But my goal? To see it in the best screen and most authentic way possible. Make sense? If you watch it in a standard theater you’d see something like this:

But if you saw it in IMAX you’d see something like this instead:

Big big difference right? Especially when the screen is a full 8 stories high. So I watch the movie, and am blown away by the presentation… The scene, the experience. And then I start reading about it the day after… in between my first and second showing I stumble upon this article. Which says, basically, only 24 IMAX theaters actually show the film correctly the way JJ intended it. So, basically, what really got my into a twist, was this quote from Abrams specifying EXACTLY what IMAX projectors to watch it on.

“You cannot compare a traditionally projected image with a laser image. The blacks are true blacks. It’s almost as if you have to adjust to it.” This is possible thanks to the six feet high, six feet deep and three feet wide double projectors which have about 100 lasers in each system shooting at about 800,000 tiny mirrors. This is how they can directly influence each pixel.”

And my IMAX? Right, my IMAX wasn’t one of those 24. Hrmm. If you’d like to see it correctly, here is the map of the theaters that are showing it in the “Right Format” per Vocativ. 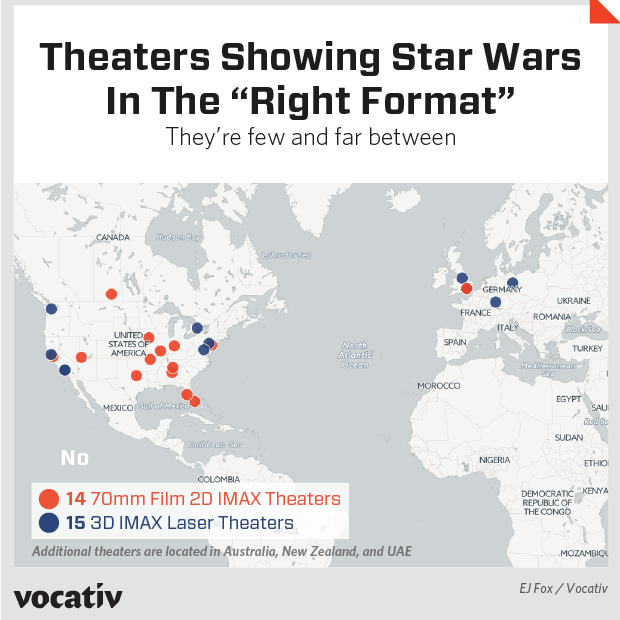 So once I realized that I’d purchase three different showings of non-true 70mm negative tickets over the opening weekend I flipped out. And that is where we get to the whole point of this piece. So I searched for an email address for IMAX and I let loose a salvo email just in a hope to get my angst off my chest.

Greetings!
I just wanted to say first, that I am a huge huge huge IMAX fan. I always look to you guys first to see if you can present the movies I want to see. You always have better sound. Better screens. Better quality all around.

But I have to say, though I thoroughly enjoyed The Force Awakens, I was very very disappointed when I found out that I didn’t actually see it in a Laser theater or in a true 70mm 2D negative theater. Let me set the stage for you. I purchased a number of tickets, for me and my friends to OBVIOUSLY see it in your theater a month ahead. We then waited in line close to all day long… for the 1:40 am showing. We watched as showing after showing went in and came out, went in and came out of substandard theaters, knowing that we were going to see a superior movie experience. BECAUSE DUH, ITS IMAX. And to think that J.J. had even gone so far as to shoot sections of the movie in the 70 mm neg?!? Awesome.

Then as we were watching the projector boot up, we noticed that the projector was running Windows 97, or some terrible OS. Which meant, we weren’t going to be seeing the native celluloid. Which meant… we wasted our time in line. Which meant we wasted our money purchasing a significantly more expensive ticket. (Which I normally would BEG to pay you more money for… because you are the best house in town for movies.) But to stand in line, literally an entire day when we could have just headed in to the nearest theater to see basically the same movie, is heartbreaking.

Even worse? I purchased tickets already for tomorrow for my kids in the same theater. And then again on Sunday. For the same experience. I understand that you guys didn’t foresee demand being as high (wait, what? how could you not foresee this? you are amazing. of course fans will prefer your theater) but they schlep off a standard digital run to us is just unacceptable. I’m going to be out close to $150 bucks in tickets, that I could have spent like $80 on and would have been just as happy as I am right now. (Yes, your sound is better. That’s a given. But it’s your 70 mm neg that is THE selling point. IT IS THE REASON I PAY MORE.)

I just want you to know, that I am very unimpressed. And I will be reigning in my desire to look at your showing times first from now on. You lost a fanboy last night. And if I could switch out my tickets with a standard digital 3D showing for the same times I would. But I can’t. So I will be in your theater, two more times this weekend, internally fuming about how you are treating your fans. I will be commenting to the local management. And I will avoiding future desires to see movies in IMAX anymore unless I can certify, verify and triple check whether or not I will be able to see a projection with either, 70 mm celluloid or a laser projection will be used in advance of the purchase. In a word, you’ve lost my trust.

Thanks for taking a moment out to listen. I do think you are capable of so much more.
Until then –
Taylor Holmes

So, looking back on it, this email was a little much. Definitely brought a gun to a knife fight! hahah. But my larger point here is this. You won’t talk to anyone if you don’t reach out. And basically my goal was primarily just to vent about the lack of actual celluloid or fullon laser projectors for the hardcore film aficionados. But what happened next was fairly surprising, even to me. I got emails, and texts, and voicemails, and more emails, saying that the Executive Vice President over Quality Control of IMAX was trying to get ahold of me. I kid you not.

Two hours later, David Keighley and I chat on the phone for the better part of twenty minutes while he was on a plane to somewhere extravagant, and filled with movie stars and coconuts, I’m sure. Hahah. Seriously, basically he wanted to know the extent of my problem, and for me to sort of walk me through the problem as I saw it. I basically said exactly what I detailed above (while our conversation was punctuated by the arrival of his drink order, and some other loud person in first class beside him was too loud for his liking, “I really wish that guy with the peanuts would just shutup.” I kid you not) and then he schooled me on the economics of celluloid verses digital. Apparently it costs $50,000 to create a single print of a modern 70mm negative. And for the same film downloaded digitally? ‘Basically around $200.’ ‘Wait, pardon me? How much?’ – ‘$200.’ Ok. Can’t really argue with that I guess. He ended up offering me tickets to a theater in LA or, where was it? New Mexico? Can’t remember. Which I appreciated, but unless he planned to swing by on his plane and pick me up it was a non-starter.

But overall my larger point here is this. Remember when your creative writing teacher had you write Oakley, or McDonald’s, or Nike, or what have you, just to see if you could get them to respond? And you got all those bumper stickers and swag back? (Tell me you got something back or my argument deflates immediately.) This is just like that. You should reach out. Talk to that famous author that you love (I have an interview with my new favorite author Jay Kristoff that I’m dying to share with you) see if you can’t get that answer to your question about that scene in the book you just didn’t understand. Or write call up your favorite artist that you’ve been infatuated with from afar. They’d be flattered to hear from you. You know how I know? Because they are human. This interaction with the EVP of IMAX is just one of a million lessons I’ve learned over the past year about reaching out and learning from the people that I admire. Most of these people spend 99% working on their craft with very little feedback at all. So you might be surprised at just the kind of response you end up getting.