Banksy Gets Evaluated By An Art Critic 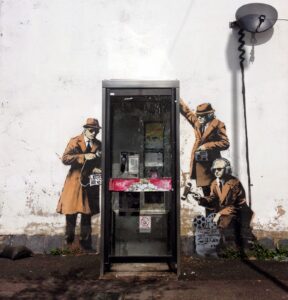 This video was recently posted by Banksy. And its highly interesting in that it shows an art critic reviewing one of Banksy’s pieces during his New York month of installations. The critic obviously isn’t digging on Banksy. He wonders why there were throngs of people there taking photos of the work. He didn’t see the inherent value of the piece, or what others saw in it. He obviously knew that the piece was worth upwards of a half million – which was true. But he didn’t know WHY the piece was worth that much.

What the Art Critic doesn’t understand, because he’s too busy working with the pre-approved art world, and hobnobbing with the well known and the already understood, is that people will like what the people will like. If someone is clever and ingenious… and on top of that, if you are also able to continue doing art for art sake, and on top of that, you are able to going on doing it anonymously – with no one even getting close to catching you… then Kings to you Edmond. What’s funny is that Banksy despises it when his stuff is taken down and sold. He even goes so far as to validate works via his board his titled the Pest Control. Nothing gets sold anymore without the Pest Control validating it as a Banksy. And occasionally the board will deny a validation out of spite it would seem.

But this particular run in with the Art Critic is fascinating in that the critic is overrun. He doesn’t stand a chance here. His only word is to say, well, I guess I would be a complete and total dork and totally hate it yet… But I definitely don’t like it. But what the people inform him of though, is that he is irrelevant. And I agree. The art world is used to the few elite critics defining what is art, and what is not. Well, those days are over for Banksy anyway. The critics definitely do not matter. He’s here to stay.