A Geek’s Review of Ghost in the Shell

I’m going to start out by offering that I think that you might just prefer any other review of Ghost In the Shell than this one. Other reviews will dive into the Scarlett Johansson white washing controversy. Other reviews will discuss the state of the union on all comic to movie conversion success ratios (spoiler alert, its awful.) Or maybe they’ll talk you through the CG or maybe the acting or other Hollywood-esque details? But not this particular review. This is a geek calling out other geeks and discussing the lore and myth of manga and geek culture. This geek review will be a smack down of our perspective of what the movie should live up to. And the silliness really of it all. But I will say, before I dive deep into Geek-dom, that the movie, from a purely objective standpoint, was fine. But my gripes with it, I guarantee you, aren’t the same issues that you will have with it. I promise you. Let’s get into it.

The Myth of Manga and Japanese Comics 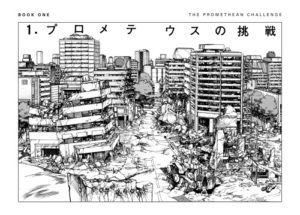 My geek cred should be pretty well established. I mean, just look at this website? Mercy. I grew up a hacker during my early teens. (Pro-tip, it was infinitely easier to hack things during the pre-interweb days. It really wasn’t even hacking if you think about it. It just… entering.) I was a huge Batman comic fan, but I had a good friend that introduced me to Manga via Appleseed. Appleseed was the story of a woman, a robot mech, and their life in the post world war III Utopian city Olympus. Appleseed was amazing. The art of those books just blew my mind.

Appleseed was created by Masamune Shirow. And I was in at the ground floor in 1983. I still have all the books of all four volumes in a well protected box in my garage. In 1989 came another amazingly mind blowing book by Masamune Shirow called The Ghost in the Shell. And I got into Ghost, but I never thought it was nearly as good as Appleseed… at least from an art standpoint anyway. But seeing as though the book was so filled with silly comedy and Dad jokes that it was kinda surprising that it took off at all.

Enter the animated cartoon, which took a totally different angle on the overarching story. Gone were the jokes and the silliness. And the animation took a totally different view of the original content. And it is this vision that sort of took hold of the larger social perspective of what Ghost in the Shell actually was. It’s a pensive and dark tale. It’s thoughtful in its contemplation of the material. It considers this idea of the soul and this idea of the machine and grapples with it. It takes this idea of a city hellbent on OD’ing on technology and critically questions our rampant addictions. It seriously grapples with The Major and her middle state of human/machine-ness. Sure there are a couple awesome gun battles. Sure there are some fantastic tank scenes. But really? It’s a philosophy primer on what it means to be a human. 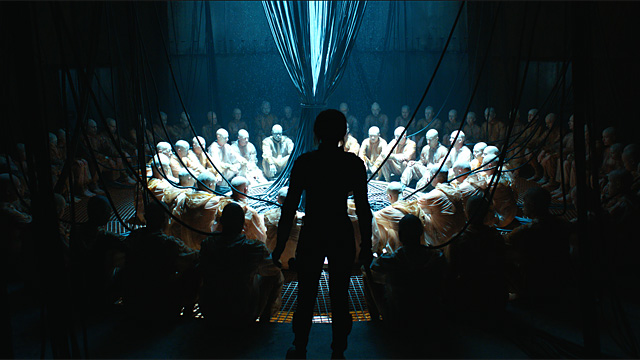 So when I walked into the theater the other day… you are starting to get a feel of what was already going through my head. We have the Masamune Shirow art that is near holiness in Appleseed, and fairly good in Ghost in the Shell. You have this fantastic storyline of a girl made into a robot in order to fight the sins of techno-city-sprawl. You have possibly one of the greatest villains of all time, the Puppeteer, who has been committing a large number of crimes throughout the city via proxy by “ghost hacking” augmented humans in order to get them to do his bidding. We have a robot/cyborg fighting an advanced AI created by the Japanese government and hellbent on causing the deaths of many. This is goodness. It’s a great story.

Enter Scarlett and the white washing controversy. Apparently, solely here in America, we go bat-fritz crazy when a white actor takes the role of a historically minority owned part. Here? It is a Japanese character converted into an American character? But it’s even worse because it is actually a Japanese woman’s brain, into a robot made to look like an American? I personally didn’t care. But I will give credence to one detail where this all goes sideways. At the end of the movie, when The Major meets her mother and she tells her what happened (which, never happened in the comic books mind you), she says at the end, I am Major. Right? She doesn’t make reference to her past. To her Japanese-ness. She completely has no issue with her American body, etc. And when asked who she is she says she is Major? What about, I am reborn, I am Major? Wouldn’t that be better? Make some reference to the change.

But with the movie, it works so diligently to hit each beat from the comic books, (the briefcase machine gun, the scuba diving, the spider-like-incarnation of the puppetmaster, the 3d hologram signs of the city, etc etc etc) which they do brilliantly, they forget to give the story characters anyone in the theater would care a lick about. Sure, you can start a comic book with 2 minutes of exposition about the Major’s creation, but you can’t do that in a film. Sure, you can be all guns, blamo, and 3d visuals in a comic book. But you can’t do that in a film. No one will care about your film unless you give it characters that learn, and grow, and develop. The Major started out dead, was created into a robot, and for the next 100 minutes she stays flat. There is zero growth or passion in either the acting, or even the role itself.

Sure, she learns that she was killed by the government for being a rebellious and antagonistic to the government. And as a result, she was killed and converted into a robot. (Which just doesn’t make sense if you think about it. Let’s take a dissident poet, and rip her brain out, and stash it into a weaponized robot? Who thought this would be a good plan?

Don’t get me wrong, I really dug the visuals. And some of the action scenes were beyond the pale. But wow, did I not get into this movie. And I’m not saying that because I hated the white washing. Or hated the ruining of my favorite comic book. (To be clear Masamune Shirow has always been an opportunist that has sought to capitalize on his books. So I don’t think it’s any worse than anything than anything that he has done to his own property. I just didn’t care about the Major. I didn’t care about her survival. Or about her future in Section 9. Or even really about this review…..