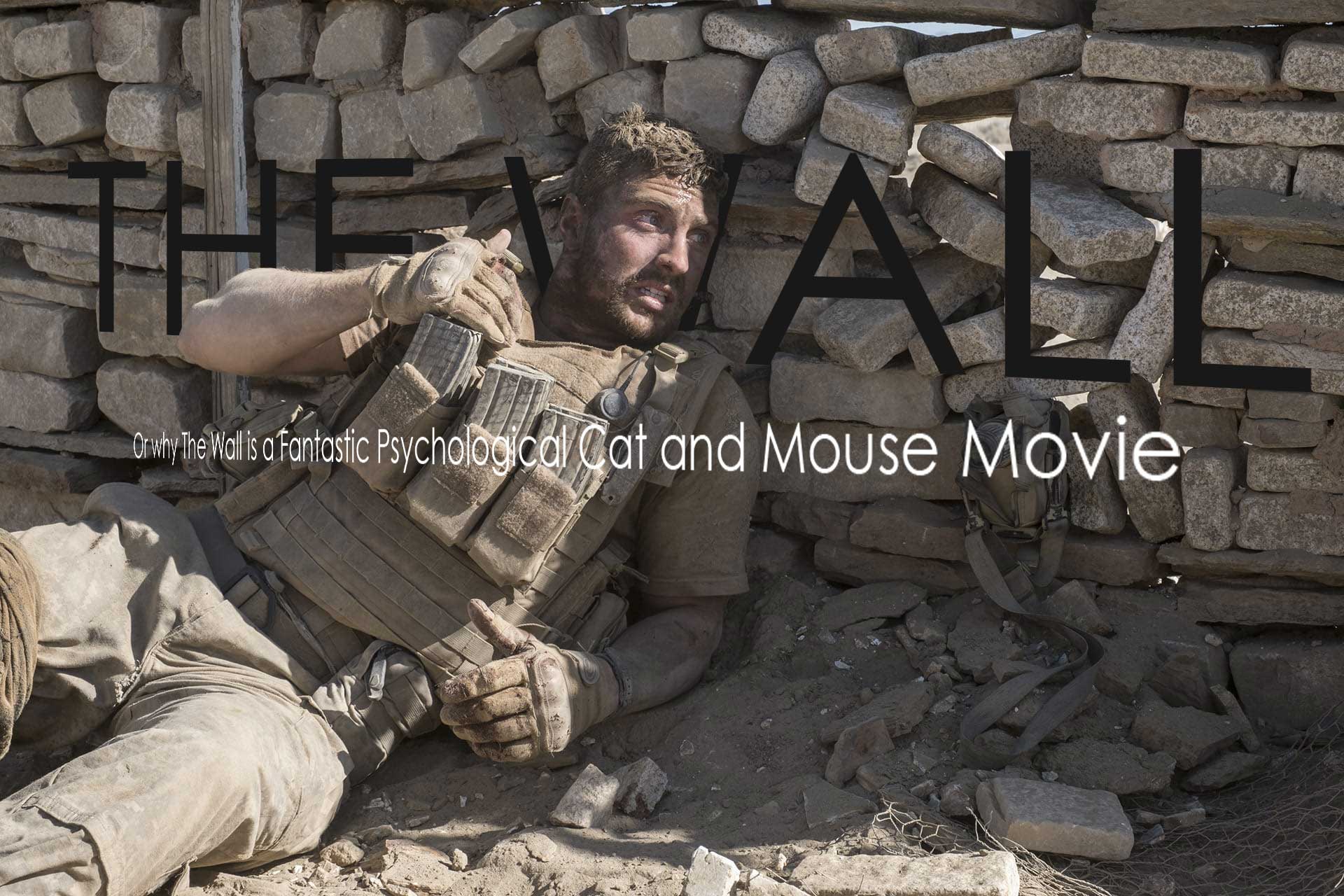 The Wall is a Fantastic Psychological Cat and Mouse Movie

Taylor Holmes
cinema
August 3, 2017
The Wall is a movie with only three actors and very little else and yet, still a satisfying cat and mouse psychological thriller.
Screenplay
Thrills
Acting
Action
Reader Rating3 Votes
4.5

The WallThe Wall is a Fantastic Psychological Cat and Mouse Movie

The cast of the movie The Wall is: Aaron Taylor-Johnson, John Cena, and Laith Nakli. Full Stop.

That is the entire cast list. The only movie that I have discussed with a smaller cast? Locke. And that could be argued has a bigger cast actually, now that I think of it. There were a ton of people on the phone. Yup. Just checked on IMDB. So now that I am thinking more clearly (I have yet to have my coffee this morning), maybe the only other movie that I’ve seen that comes close is the movie Tape by Linklater. Yeah, just confirmed, both had a cast of three. (Ethan Hawke, Robert Sean Leonard, and Uma Thurman.) Stop! Let’s see if we can name a few movies in the same class as this one. Psychologically riveting movies with just a few people in the cast:

And what about Venus in Fur, Before Sunrise, etc. etc? Better yet, why does it even matter? Let me tell you why such a small cast matters. It means that if you only have a cast of three, with only two of them on screen, and one unconscious for most of the movie… it means that you have got to have a phenomenal writer pulling this story together.

If you haven’t seen the movie The Wall yet, the setup is simple. It’s the end of war in Iraq. America is trying its best to rebuild the infrastructure of the country. And when the movie starts, we begin with a sniper and his eyes, overlooking a pipeline project. Down at the project we see a number of dead. All shot and killed. The sniper and his companion have no idea how these people were killed, or if the threat is gone. And it was in the middle of this swirling question that this movie lands. It is a Mexican Standoff between a sniper from Iraq and a sniper and his eyes from America. This might clear a few things up.

Yeah, it’s a standoff. The question I had, the very first time I watched this trailer was, how is this a movie? How could this possibly be a thing? But then I remembered one of my favorite sniper novels, War of the Rats, (which was made into the movie, Enemy at the Gates) and how great that movie became. The War of the Rats details out the battle between the best Russian sniper and the best German sniper during World War II. The tactics? The methods snipers utilize to get their shot was fascinating to me. And it was this book that opened my eyes to just how crazy and dedicated snipers have to be in order to safely get their shot off. (Obviously, if you are fascinated by this world, the other must read is American Sniper, which was also made into a fairly tragic movie by Clint Eastwood with the same name.)

But generally speaking, snipers, in movies, are portrayed fairly poorly. I mean, how do you accurately portray what these men go through to pull off one shot when the setup takes 15, 20, 30 hours? And after pulling the trigger once, they slowly, and surely, pack up, and move whether they hit their target or not. How can a 90 minute movie possibly show what that might even look like? I would argue that The Wall is that perfect sniper war movie, condensed into a single 90 minute window by spinning this conversation on its head and turning two world class snipers into a psychological game of cat and mouse.

Many people online talking about this movie bemoan how little happens, and they bemoan the fact that this is more of a psychological thriller than a war movie. And in my opinion, that is exactly what makes this a fantastic movie. Sure, it’s not Hurtlocker good. But it is a riveting little movie with an amazing head on its shoulders. Totally worth the watch in my opinion. But I will say this, from here on out, I plan to talk about the movie on a much deeper level, and it should only be for those who have seen the movie ok? So, find it, watch it. Then join us in the discussion about it below. 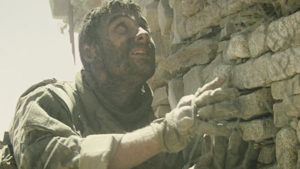 The Wall A Deep Dive

Very early on the chess game of The Wall rockets from intro to end game. Matthews (the sniper, John Cena), eventually gets tired of waiting after 20 hours of watching the field. There is no movement. No contact with any bogie at all. So Matthews tells Isaac (his spotter, Aaron Taylor-Johnson) he’s going down to check it out. Two minutes later, Matthews is down, shot by a sniper. Three minutes later, Isaac is shot as well… and is now hiding behind a fairly unstable wall. Matthews is out in the open. Isaac is hidden, but barely. And just like that we are in our end game just a few minutes into this movie.

But where this movie gets really fascinating is when Isaac finally makes contact with a friendly on the radio, only to discover that that friendly is actually the sniper hunting him down. Initially the conversation was about extraction points and validating identities. When Isaac starts to ask clarifying questions… “You are inside my wire, you are within my radio frequency” the charade starts to fall apart and Isaac realizes he’s actually talking to the sniper that has him pinned down.

Occasionally, Matthews wakes up and attempts to assist Isaac, but his position is exposed and he is hit too badly. Eventually Isaac helps him coordinate a shot, but the sniper quickly shoots him in the shoulder and Matthews is out of the equation.

The rest of the movie, from here on out is Isaac trying to not bleed out, not die of thirst, while sparring mentally with the obvious psychopath on the other end of his radio. Isaac eventually realizes that his only real chance is to get his radio working and to talk to his base in order to get an extraction. But to do that he’s going to have to replace his antenna that the sniper shot off intentionally. Which, he eventually does by crawling out to a dead soldier who had also been shot in the knee just like he had been.

Hrmm. Maybe this wasn’t the first time this sniper has pulled this bait and switch con job? Weird. Who is this guy? Could this possibly be Juba? The ghost? Nah. No way. The enemy sniper with 72 confirmed kills? Couldn’t be.

So Isaac gets his radio back together and working. And when Isaac finally gets in contact with his base to call in an extraction the sniper overrides his conversation and takes over and cuts him out. And yet, Juba is calling in an extraction team for him? Why? This can’t be good. So Isaac grabs Matthews sniper rifle in order to take the shot. But in order to do so he’s going to have to knock down his only cover… The Wall. 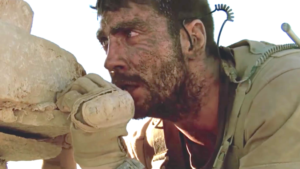 The Ending of The Wall Explained

As the helicopter comes in Isaac has his triumphant moment to overcome his demons and to finally get his payback. Isaac lines up his shot as best as he can and then proceeds to knock down the wall. And as he does he starts taking fire from Juba. But then in a scene straight out of Saving Private Ryan Isaac gets his shot off and the barrage of bullets stop. Isaac has done it. He has finally killed the ghost! And just like that he and Matthews are being loaded onto the helo and lifted out of the field finally.

But moments later, the helicopter starts taking fire. The medic working on Isaac is shot in the head and Isaac is frantically trying to tell anyone who will listen exactly where Juba is. Juba who has obviously survived his shot. Juba who obviously was playing possum only to draw in the helicopters and kill everyone on board. Juba who is obviously the master chessman.

Thoughts on the Ending of The Wall

America hates movies end in a depressing way. But what it hates more than downer movies is military movies with downer endings. This is a fact. Rule one in Hollywood is, don’t kill a dog. Just don’t do it. (John Wick succeeds solely because it breaks rule number 1 and then spends the rest of the movie avenging said dog.) Rule number two? Do not, I repeat, DO NOT let the movie end unhappily. And if you have to, that is fine, but please please please do not end a military movie unhappily no matter how realistic it might be. Just don’t do it.

And yet, here we are. Not only has The Wall ended unhappily, but it imbues America’s enemies with uncanny intelligence and cleverness. Not only have our heroes of this movie died, but they were outwitted by an infidel!  How is this happening? Gah! hahahah. But the director here, Doug Liman (who was also the director of Edge of Tomorrow, and many of the Bourne movies) throws all those conventions to the wind and the movie is better for it. Or do you think Isaac should have popped out of the helicopter at the end and made the shot on Juba from 3 clicks away?

Seriously, what were your thoughts on the way this movie went down? And can you think of other psychologically tight casted movies like this one?