So this past weekend I did something extremely un-impulsively crazy.  I got a tattoo.  Yeah, that’s right… me, the geekiest white guy on the planet… a tattoo.  The nerd in your class that looked down his nose at all you unconventional types. The guy who never swore, never drank and probably the last thing on his mind, ever, was a tattoo. Fairly surreal still actually.

About seven months ago I had a close encounter with a snowy roof and a close loved one passed away and soon after my favorite author of all time committed suicide after a long bout with depression.  Things were entropically spiraling much faster than normal and there seemed to be no end in sight.  Death was staring me in the face – literally.  The odds of my dying or being severely maimed on that roof were about even I’d say… and yet I came out with basically only a popped ACL.

More importantly though I realized a fairly key intrinsic fact to this life that we live.  Its short.  No really really short.  And not only that, the shortness may not even make any sense while we are living it.

So, since then I have tried to start over.  I’ve tried to reprioritize my life and truly put first things first.  Like God and my family.  They should be the only things that really matter in my life and everything else should fall away to number 104, 105, 106, etc.  So something like this:

And in reprioritizing my life along the lines of the above listed out list it dawned on me that I should commemorate this reprioritization some how.  Like a shibboleth perhaps?  Or maybe just something similar to an Old Testament set of standing stones to be used as a memory of a sacred moment.  And I struck upon the idea of a tattoo.  Oh, but within the Christian Community it has such a negative connotation!  And oh no, what will my employer think?  And oh my won’t it mean I’m a heathen and a redneck (not necessarily in that order)?  These things really went through my head.  And even so I began designing.

What Should the Standing Stone Be?

To be honest, this was probably the easiest part.  I have always loved a Latin phrase utilized by Alcoholics Anonymous in the first step which quoted Psalm 130:1:  “De profundis clamo ad te Domine.”  Or, “Out of the depths I cry out to you, oh Lord.”  It is a lament of David’s when absolutely everything in his world was falling in around him.  And yet, he seems to know where he is rooted – in his God.   Here is what Matthew Henry’s commentary on Psalm 130:1-4 says:

The only way of relief for a sin-entangled soul, is by applying to God alone. Many things present themselves as diversions, many things offer themselves as remedies, but the soul finds that the Lord alone can heal. And until men are sensible of the guilt of sin, and quit all to come at once to God, it is in vain for them to expect any relief. The Holy Ghost gives to such poor souls a fresh sense of their deep necessity, to stir them up in earnest applications, by the prayer of faith, by crying to God.

So I started with “De Profundis” because it was absolutely perfect for the rebuilding I was doing and what I was wanting to commemorate.  Then, after a couple of hours of playing with various type treatments out at veer.com I had what I wanted:

So what of the birds?  The birds were a last minute change.  I envisioned the three birds to at first seem to be crows – carrion eating birds circling the soon to be deceased.  But the the three birds actually when seen more clearly are representative of the triune God come to the rescue.  Out of my demise comes my salvation.  Out of my death to self comes my greatest gain.

At first it was nearly impossible for me to even walk into a tattoo parlor.  On numerous occasions I sat outside and just looked in.  Later I ventured in more than one and didn’t talk to anyone.  And the week before I spoke with a couple of nice guys at different shops that gave me advice and ideas as to the design.  When I finally found the shop I definitely wanted to have it done at I couldn’t wait to make the appointment.  When I finally went in to get it done and they had one opening for the entire day right then I just knew I had to go or I never would. 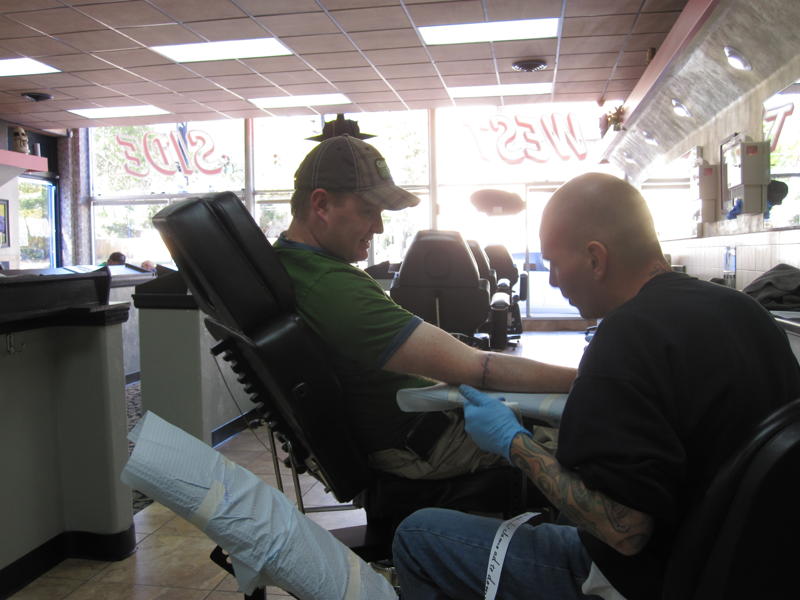 Chris, the artist was awesome.  Just a really cool guy that wanted to know all about my “come to Jesus” moment.  He also did a fantastic job capturing the intricate details of the design.  When I asked him how much of the detail would be lost because it was so small – he confidently said, none of it.  I can make it exactly the same, and exactly the same he did. 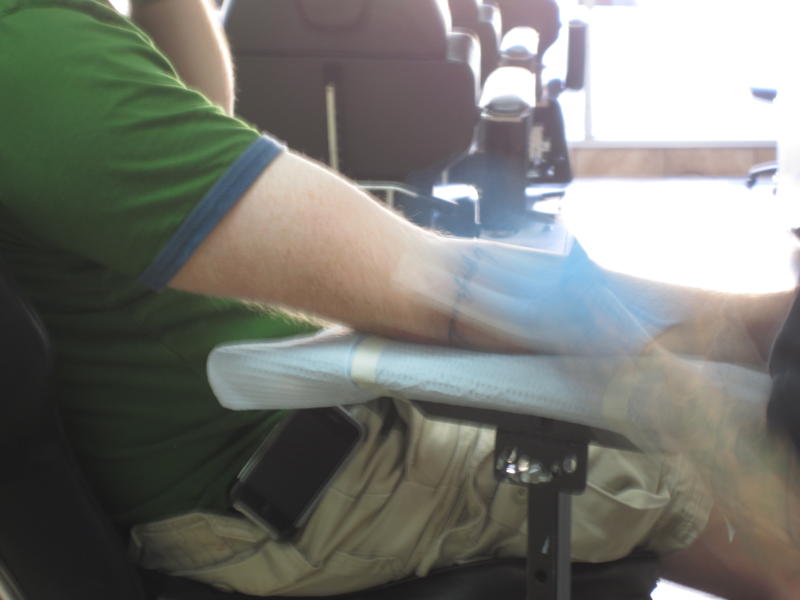 I love this shot.  Reminds me of Jacob’s Ladder, hehe.  That analogy gets all jacked up and weird the more I think about it.  Never mind.  I didn’t just say that.  I will say that the tattoo joint was fantastic.  Extremely clean and very anti-stereotype.  Well, save for some of the fairly crass music piped in over the overhead speakers that is.  But otherwise it was more like a trip to the dentist than anything else. 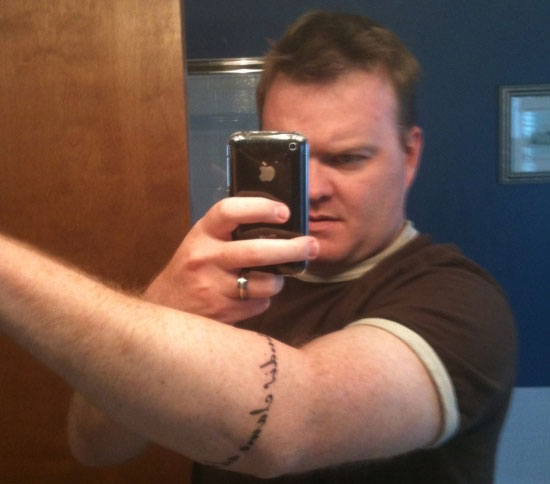 And that is how a fullon Nerdy Christian Geek got Tattooed…