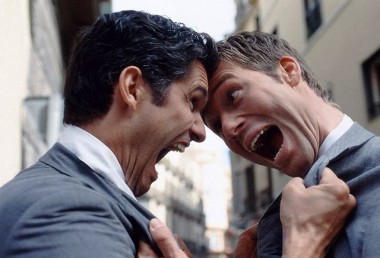 In college I was a philosophy major for a while until I realized Socrates and Aristotle wouldn’t make a dime today doing anything outside of teaching. Regardless I considered myself something of a philosophy wunderkind – momentarily anyway. Eventually I discovered Nietzsche and wobbled off the philosophical tracks indefinitely. But I still enjoy the occasionally well grounded philosophical argument.

So when I accidentally ran into this particular quote out on philosophyetc.net discussing whether being a Christian – or just arguing a Christian argument – was even remotely valid I stopped and took notice. Now, whether you are of the Christian persuasion or not is fairly immaterial to this particular discussion. Richard Bissell is saying here, not that those who believe in a Christian epistemology are wrong, but that even constructing an argument in defense of said beliefs are wrong. I can’t even tell you how different this distinction is. Here is a key quote from his high-minded rant:

Cosmological and fine-tuning arguments don’t support anything stronger than minimal deism. The ontological argument is obvious sophistry, and the modal version is question-begging. The design argument was defeated by Darwin; in its place we have the problems of evil and divine silence: the world just doesn’t look anything like we’d expect it to if overseen by an omni-max god. In short, it seems to me, we seem to have every reason to reject theism, and no good reason to accept it.

When reading individuals that utilize a disproportional pile of multi-syllabic words, the tendency is to acquiesce immediately. ‘Boy is that guy smarrrt… I figer he must got it right.’ said in my deepest southern accent manageable. You know what I mean? But if we walk this paragraph through and dismantle the logic I think we see something quite interesting.

When he refers to “Cosmological and fine-tuning” this basically a line of thought that says that the universe is so perfectly well dialed in, so exactly calibrated that it predicated someone intelligent in order to get all the finely tuned inputs correctly coordinated and setup.  Right?  Simple enough.

“Minimal Deism”, is all that fine tuning could potentially even accidentally support.  Which is a funny thing to posit.  First, what is Deism?  Basically its a belief that there is a God, but he is at a remove… he created the system of the universe but chooses not to be involved with us on a daily basis.  A clock maker basically.  The clock is created but then is never touched again after sending it out into the world.  So its funny that Mr. Bissell would concede a “minimal Deism”. Either God exists or He does not.  (I get what he means, but its funny regardless.)

“Ontology” is the study of being.  On becoming.  So, how do we exist, or more to the point, how did we come to be.  Like Descartes famously argued, “I think therefore I am.”  (He then went on to use his second step to prove God exists… but I’m not making my own assertions here, just responding to Mr. Bissell.) Descartes’ argument is an Ontological argument.  There are a number of different subclassifications to Ontology, one of which is a Modal argument for God.  Modalism was most famously argued by Kurt Gödel who strung together definitions, axioms and theorems in order to construct a logical argument of God’s existence.  Bissell basically says that the Modal form of Ontology is sophistry, or deceptiveness.  A fraud.

Bissell then continues by saying that Design (specifically Intelligent Design) was defeated by Darwin, which is fascinating since Intelligent Design didn’t really exist until the mid-1990’s.  But maybe he was referring to the Teleological Argument which has been around for centuries – and Intelligent Design originally sprang from the Teleological argument.  But even if Darwin was correct it is odd to consider that the beginnings of the universe were defeated by a method for life to evolve from scientific classification to another.  I personally think that Design posits a method for how life exists, not how it expands or becomes more complex.

And here Bissell comes to the money shot – “in its place we have the problems of evil and divine silence: the world just doesn’t look anything like we’d expect it to if overseen by an omni-max god.”

When Bissell comes right down to it – at the end of the day – there is evil in the world and therefore it doesn’t make sense.  At the end of the day God is silent, and that just doesn’t make sense.  And since the world doesn’t look like anything that Bissell would expect if there really was a God above all other Gods (omni-max) then we should doubt his existence completely.  Right?

Embedded here is a logical argument so enormously vacuous that its surprising someone as smart as him would make this sort of a mistake.  If we are hunting for a God that creates universes and a God can nimbly develop stars and solar systems – do you think He would look like anything that we could logically predict or foresee?  In my mind, any God that would be understandable, comprehensible by me, by the mere definition would be inferiorly finite… seeing as though I am inferior and finite.

An Argument For Inargubility – he is basically saying that a position (specifically, Christianity) is more than just an untenable argument position to hold.  He’s saying that Christianity should not even be argued.  It isn’t even a position worthy of defense.  But the Bible predicted Bissell would come to this place – that society in general would arrive at this logical impasse:  Romans 1:22-25 – “Claiming to be wise, they became fools, and exchanged the glory of the immortal God for images resembling mortal man and birds and animals and creeping things. Therefore God gave them up in the lusts of their hearts to impurity, to the dishonoring of their bodies among themselves, because they exchanged the truth about God for a lie and worshiped and served the creature rather than the Creator, who is blessed forever! Amen.”

This is just a response of sorts.  Just a reaction to some random comment I saw on the web.  Nothing really.  But it is how people today think.  Since I can’t understand God.  And there is pain and sin in the world – since I haven’t “heard” from God, then he doesn’t exist.  Well, I will say this… if you really are looking for God – as opposed to arbitrarily berating Him – I promise you He will be found.  If you really do want to understand the “problem of evil” in the world, He will reveal it to you.  Knock – and the door will be opened to you.

If you want to read Bissell’s entire blog posting you can find it here: “Is Religious Belief Reasonable?” – http://www.philosophyetc.net/2013/10/is-religious-belief-reasonable.html