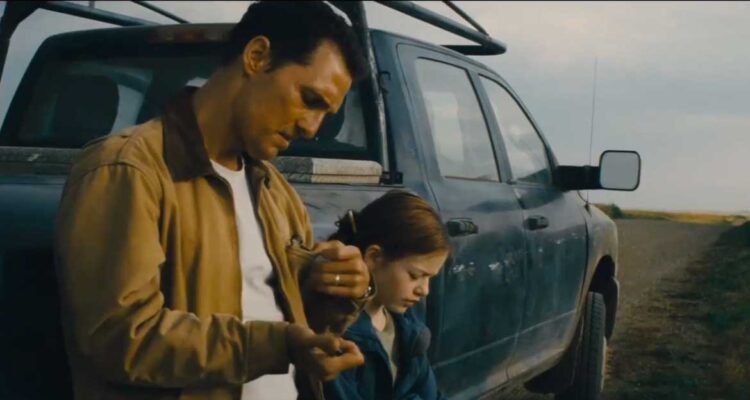 Christopher Nolan is working on a new film. I first mentioned it a couple months ago – but the previous trailer couldn’t even be considered anything but a pile of inspirational shots and then a trail of smoke leading out into the heavens. Now Nolan has release an actual trailer that has turned the interwebs into a roiling, frothing chaos of speculation and excitement. Some are saying Nolan said nothing in this trailer. Some are saying its the greatest trailer of the year.

I personally believe that it will be the movie of the year, but not for the reasons that others think it will be.  Some are looking at Nolan’s direction work on Batman.  But I think the movie this one will be most like will be The Prestige.  A family drama, interconnected with technology and riddles.  The Prestige was about two guys that were trying to continuously best the other with a better and better act.  The rivalry eventually leads to deaths and betrayals.  I’d bet an arm that the interstellar astronauts will come back years later only to find that the world is wrong – backwards – different.  Or maybe, the movie trailer is out of order?

Yes.  That’s exactly what is happening.  The movie starts with the children older, and then they travel through a wormhole in order to travel outside of the solar system and get the resources needed.  That in turn brings them back to earth before they left.  And then we see the older children younger.  Do they then decided whether to intercede in avoiding the problems that caused earth to lose all its food supplies?  Whatever Nolan does, you can guarantee that it will be clever.  The only thing that worries me about this script is that Spielberg was up to direct Nolan’s script for a while.  Which means he would have had a happy ending?  We meet the aliens and the aliens are our friends?  Bah.  Nolan would never ever stoop like that.  Never.  We will have to see.  I for one am excited.  Cannot wait.