After lines wrapped around the block to see George Lucas’ new movie, during the re-release four years later Lucas changed the name from “Star Wars” to “STAR WARS: Episode IV – A New Hope”.  This was not an insignificant change.  It hinted at a back story that brought us to what we were watching today.  Episode FOUR?  Where’d 1, 2, and 3 go?  A New Hope?  What caused this depression?  Well, it also opened the door for Lucas to actually create episode 1-3 and fill in those blanks.  But it was this first change that has been the genesis of a world of changes that have driven the average Star Wars fanatic into a state of apoplectic disbelief.

But at the heart of this revisionist – anti-revisionist argument is George Lucas’ philosophy and definition of what the final movie really is.

“There will only be one [version of the films]. And it won’t be what I would call the “rough cut”, it’ll be the “final cut”. The other one will be some sort of interesting artifact that people will look at and say, “There was an earlier draft of this.” The same thing happens with plays and earlier drafts of books. In essence, films never get finished, they get abandoned. At some point, you’re dragged off the picture kicking and screaming while somebody says, “Okay, it’s done.” That isn’t really the way it should work. Occasionally, [you can] go back and get your cut of the video out there, which I did on both American Graffiti and THX 1138; that’s the place where it will live forever. So what ends up being important in my mind is what the DVD version is going to look like, because that’s what everybody is going to remember. The other versions will disappear. Even the 35 million tapes of Star Wars out there won’t last more than 30 or 40 years. A hundred years from now, the only version of the movie that anyone will remember will be the DVD version [of the Special Edition], and you’ll be able to project it on a 20-foot-by-40-foot screen with perfect quality. I think it’s the director’s prerogative, not the studio’s, to go back and reinvent a movie.“

So, here we have George Lucas talking about his methodology for creating the perfect state for the movie.  And so George has actively attacked his original movie again and again and again (from an anti-revisionist’s perspective) in an attempt to get THE PERFECT Star Wars movie out into the zeitgeist of modern America.  And modern America has responded.  Again and again they petitioned Lucas Films to release the original version of the Star Wars movie, first on DVD and now on Blu-Ray.  But Lucas has not only resisted that idea, he has actively killed any such notion that an “original” version even still exists.  The current version IS the original in his mind.  THEY ARE THE SAME.  This latest revision is the better version because he had more resources and time to spend on “perfecting” it.  For example, in the 1981 re-release alone, where George Lucas actually took a low key approach to changing the movie, there were over 34 different substantial changes to the movie.

Ultimately though, it was the 1997 “Special Edition” version of the original trilogy that basically threw the gauntlet down.  It was the Han Shot First controversy that really started the fans outcry to reach its most fevered pitch.  Until then Lucas’ tendency to mess around with the hollowed stories as more annoying than anything.  But after the Special Edition we saw an enormous outcry surrounding Lucas’ completely revisionist fantasies.

In the original Star Wars version, Jabba the Hutt has put out a bounty on Han Solo for some sort of failure to pay up on an agreement the smuggler and war lord had.  Greedo, a bounty hunter, tracks down Han on Tattoine where they discuss the payment of the debt to Jabba.

As the argument continues Han quietly begins to ready his blaster underneath the table, Greedo tells him that Jabba has run out of patience with Han and that he, Greedo, had been “waiting for a long time” to take out his former associate. Han replies, “Yes, I’ll bet you have.” Han then shoots Greedo to death, through the table, with his still-concealed blaster. It has been widely reported that Lucas was very dissatisfied with this scene because it depicts Solo, one of the key protagonists of the movie – let alone the entire series, as a cold blooded killer.  And so for the Special Edition Lucas chose to add another second of footage that showed Greedo shooting and missing before Han shoots him dead.  Thus protecting his hero status, and shedding him of his cold blooded killer moniker.  The outrage at the change pitched so hot and heavy that a petition to remove the footage sparked thousands of signatures. 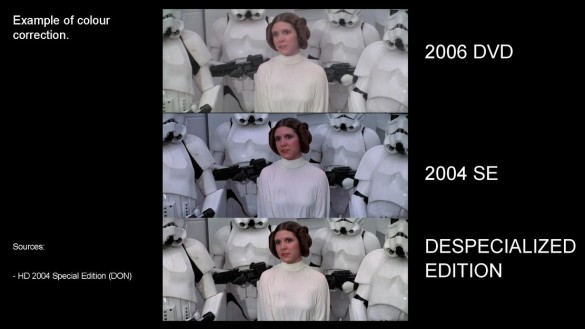 Where does that leave us today?  Well, Disney has purchased the franchise, and there are many many many a rumor about the Mouse releasing a much desired unchanged Blu-ray version of the original in time for Christmas even.  But its more complicated than that.  Fox in fact owns the world wide distribution rights to the original movie until May 2020.  So the Mouse may not be in fact the prime mover on this particular fan-boy wet dream.  Not only that but, apparently the original negative has been damaged?  “Our sources indicate that the project has been under way for quite some time, but it’s been challenging because of some damage to the original negatives they are utilizing.”  So if there are legal world wide distribution issues, and damage to the negative issues… what’s a fan to do?

Create Your Own, Apparently.

And that is what one fan has done.  I have it on good authority, let’s call this authority “A FRIEND OF MINE”, that not only is this “Despecialized” version is a possibility, it is in fact a reality.  Check out them apples…

If this isn’t the absolute geekiest thing you’ve ever seen, then I have to meet you… because you are one special individual. And my “friend” says, that it really was worth all the work. It is a truly sublime work and labor of love by the fan base. The only problem will be, that the Despecialized version 2.5 is a pretty tricky piece of work to find. If you are in need of help finding it, I will be happy to connect you with my “friend”. Because he would be happy to help you track it down… or connect you with it directly. But that’s up to him. Cough. I’m just going to watch his copy, thank you very much.