Holy crap – there are some really amazing movie developers hiding under rocks and in desperate need of attention!  This little movie is so rich with back story and latent ideas that I don’t even know where to start.  This movie was obviously pulled together by some really fantastic special effects mavens.  And the writing here was huge because the story is obviously a part of a much larger eco-system. You really have to watch this short it is spectacular.

Interested in learning more about the film?  They’ve got a full interview with the filmmakers Kevin Adams and Joseph Ksander, who co-wrote and co-directed the film.  My my own personal favorite question in the interview was huge to me because I grew up hanging around Universal Studios and can’t imagine filming there… 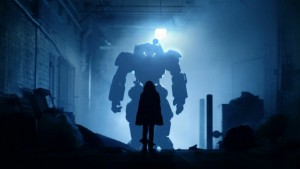 Q: Where did you film?

A: We shot one day on the earthquake set at Universal Studios, where the tram-ride takes park visitors. That was a blast, being behind-the-scenes over there. They even ran the attraction for us before we dressed the set. Then we spent two days at the Television Center in Hollywood, which is this cool 1920’s art-deco campus filled with crazy agglutinative architecture, steam pipes and cat-walks. It looked great on camera, especially after the totally unexpected rain that weekend gave us a free wetdown!

Q: Where did the story concept come from? Did anything in particular inspire this short?

A: The seed came from a more complex idea that Kevin had been working on for a while, partly inspired by his daughter. When we started working together, we pitched each other various projects, and Joe really responded to this idea of a dysfunctional friendship between a girl and her robot. We first developed it as a feature, and the short is sort of a slice from that treatment. But we wanted to make sure that the story stood on its own, with the larger world as a backdrop that hopefully makes you want to see more.

Want to read more of the interview with the brilliant guys that developed this prototype?  Check it out here. All I have to say is, Kevin Adams and Joseph Ksander?  Guys!  We want you to make this film.  This looks really fantastic.  This sort of dysfunctional relationship between the robot and the girl is a brilliant storyline idea.  Especially since the robot apparently killed her family?!? Wha?  Great stuff.