Let’s set the stage a second. I’m not sure what you are into from an investment standpoint, but I have stayed basically in the shallow end of the pool with subtle adjustments to my retirement and that’s about it. But I’ve been playing realistic stock market trading games for years now. I normally play over at marketwatch, and the goal is always to create as realistic an environment as possible to see how I would do in the real world. I usually drag 8 to 15 of my friends in to play as well and we have a blast playing for a month at a time.

So over the past 10 years I have probably run 10 different stock games.  Some have been fanciful, with a starting position of over a million, but most have been a couple grand, and realistic commission prices. And generally speaking I think I have won almost every game I’ve started. But who cares how I did against other players… how did I do against the market? Generally speaking over the course of a month, I would usually make around 250 to 300%.

Yeah, you saw that right.  Start me out with $5k, I would generally walk away with something close to 15k.  In a month. But if you’d like to know how I did it, it was fairly simple really. Read the morning news before the markets open. And notice the stocks that are moving all over the place.  Take for example a buy out, or for example a stock split, or maybe news of a new patent. What have you. I would then watch how the stock was doing in the per-market opens, and normally the larger markets would always correct the exuberance, or depression, of the pre-markets.  And then… here’s the tricky part, I would decide which way to go on the stock.  Tricky doesn’t even really sum it up.  Let’s play through a scenario.

Let’s say in early morning news (4 am or so) a company announces that its pharmaceutical drug for curing cancer had a new side effect of blindness in 40% of the patients (or what have you.) The pre-market open trading would go NUTS for sure. The stock would probably be down 25% or more.  Right?  Well, that is the epitome of a volatile stock.  That’s what I like.  Volatility. But the question now on this particular stock is this – what will the stock do coming into the Market Open? Well the pre-markets have corrected (penalized) the stock enough? Or would the movement of 25% be too little for the news on the table? So staring at the opening bell, I would watch the stock’s initial movement for a minute, and then I would do the opposite. (Yes, this amounts to a coin flip.) But generally speaking, the vigor of the pre-market escapes into the larger market in the form of scheduled buys and sells, and then the larger market begins to correct the correction. So I would buy all in on my coin flip, or short all in – as the case maybe, and watch it for 15 minutes or so, see where it is going, and decide on whether to ride it for the day or get out of my position immediately.

Regardless, I was so good at the games that I had several people offer to fund me out into the bigger market.  But the problem with that sort of market play is that I may buy and sell 4 or 5 times in 15 minutes trying to figure out whether the correction is going up or if its going down. Every buy and ever sell costs 5 to 10 bucks depending. And at levels of around 2k pool to work with that is an exorbitant sum.  You basically have to make tons of money on every buy just to cover the friction of your trading costs. So for a poor guy like me this model of volatility trading would never work.

Until I discovered Robin Hood.

Robin Hood is an iOS app that allows you to buy and sell stocks with zero trading costs.  ZERO. Only have five bucks in your back account and you want to buy a $3 share of stock? Easy. Want to day trade the heck out of a stocks bumps and valleys over the course of a single day? Robin Hood is your answer. Here are a few scrapes from the app itself to show of the amazingly elegant clean and minimal design. 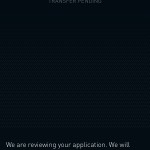 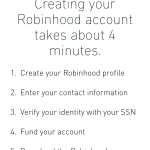 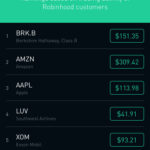 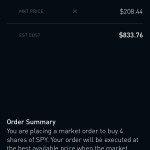 Let’s be 100% clear… this isn’t a researching tool. Even the charts within the tool are hard to read, let alone do research with. But when an app gives you the opportunity to trade with zero friction, you do what the app does best and don’t expect it to be all things to all people.  If you are really interested in an app to do that you should check out the “Real-time Stock & Forex Tracker” app. It will allow you to set alerts on specific levels and limits. It will then push you notifications if a stock loses 5% of its 52 week rolling average, or whatever.

One thing did worry me about the app though. How is this little company planning to make money? It isn’t a non-profit after all.  Apparently Robin Hood has two models for making their money back. The first is that they don’t pay you interest on any money left in your account. The interest on your cash sitting in the account will be going to them. Along with that, they also charge interest on margin for accounts that choose to trade on margin.  Their second method is that they have an API play into the app, and they plan to sell access, which shouldn’t impact the average trading joe at all.

So what’s the upshot? The upshot is that I have pulled all the nickles and dimes out of the couch that I could find in order to get the app funded with a reasonable starting position. The money is routing now and I expect to be trading in the next day or two. I’m sure I’ll be complaining about my losses soon enough! But I definitely do recommend this app as a great solution for low rent investors like myself. Really could make a huge difference at the end of the day to your bottom line. If you decide to try it out I’d like to know what you think of it.