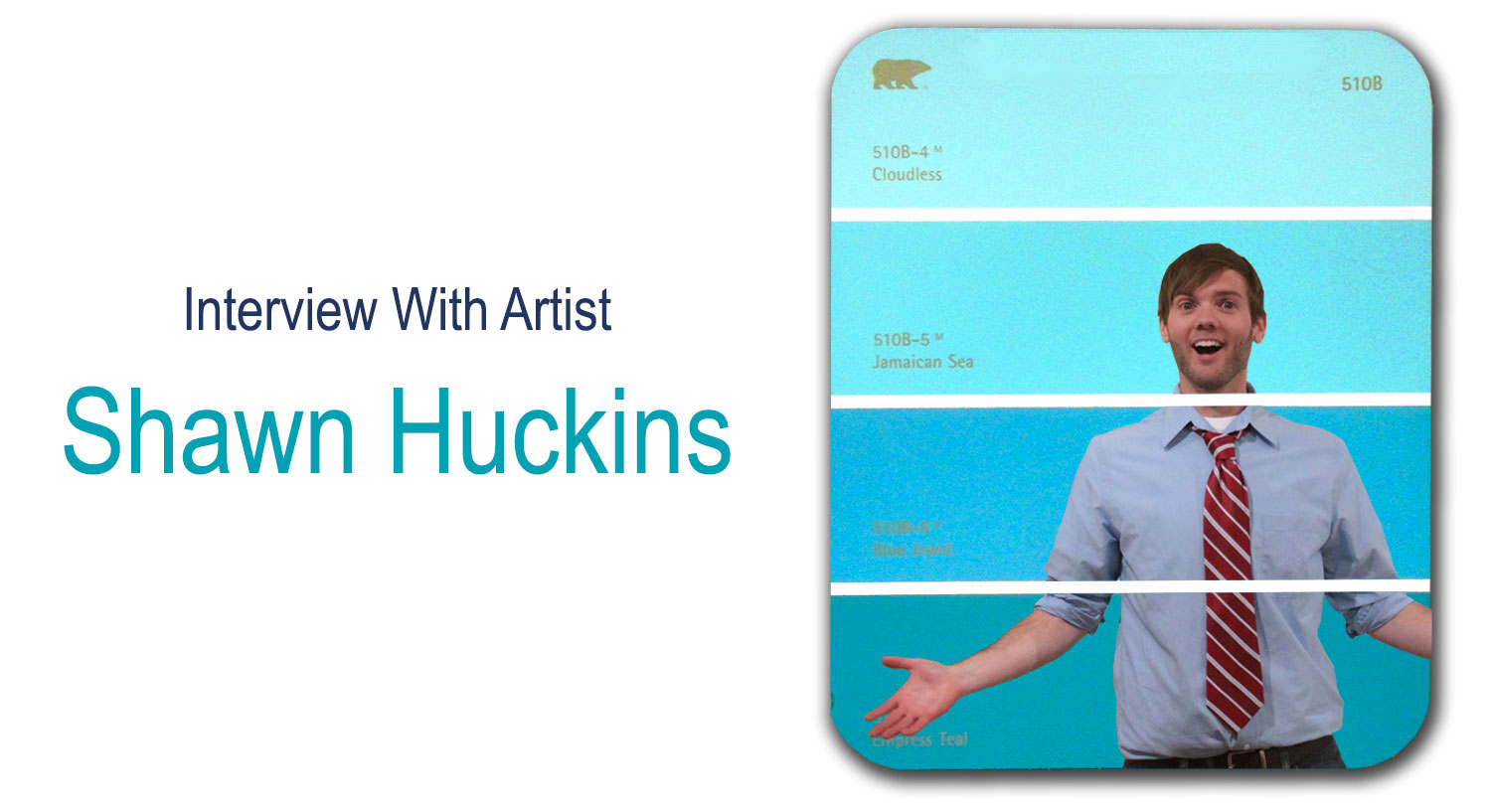 In my humble opinion there just aren’t enough artists out there who don’t take themselves too seriously. It’s a hard balance to strike I’m sure. If you are painting canvases with paint you are sort of manufacturing money – and if your art isn’t serious, how are you going to demand enough money to survive on? Too funny and you become a meme on Reddit. But Shawn Huckins has fearlessly waded into this conundrum without blinking.

Shawn enrolled into Keene State College and while taking studio and art history courses. Eventually Shawn figured Film Studies was his thing only to later flip to Architectural studies and then finally changing a final time to Studio Arts. Which is what he finished his time at Keene State with in 2006. But it was a visit to the Museum of Modern Art in New York City that significantly impacted him by the works of Pop icons such as Ruscha, Warhol, Lichtenstein, and Rosenquist. After a failed dip in the pool as an architectural model fabricator and painter for firm in New Haven, Connecticut Shawn went on to have his first major solo show ‘Can’t Miss Lime’; showing The Paint Chip Series held at Real Art Ways, Hartford, Connecticut.

And its completely understandable how Shawn’s paint chip series earned him a solo show at such a young age – its because it is utter brilliance. Here, let’s a take a look at some of the highlights from the series so you can get an idea of what we are talking about here.

Yeah, Behr paint chips – and interposed selections of art. I personally think Behr should be sponsoring Shawn to the tune of a million or two a year. And from that Shawn should be doing those walk through discussions each Saturday morning at local Home Depots around the country on painting technique. Seriously. But Shawn didn’t stop there.

Shawn has come out with several new cutting edge painting series that combine tweets and social media posts with paintings from the American frontier. The combination of the two could come out as hostile and caustic in anyone else’s hands. But Shawn treats the subjects lightly with a humorous touch and a curious perspective on what is comfortable and common in our society today, as well as what was considered normal several hundred years ago.

But what if the founding fathers had the technology we have had. What if, instead of communicating via handwritten letters sent via the pony express they had the ability to communicate instantaneously with anyone and everyone? Would our stiff and stifled founders eventually have stooped to LOL, ROFL, DaFuq, and errata? Is it our technology that has debased our conversations or is it that technology has mined into the deeper more real passions of humanity for time immemorial?

I have seen others my age not tapping into new technologies, because #higherroad – and it has only served to exclude them from their own younger family members or conversations they have inadvertently excluded themselves from. Is technology the answer? No. Are we better off today than yesterday? Define better. Regardless, it is interesting to see the juxtaposition between the two eras. Regardless, Shawn seems to be a great young voice speaking with a playful and insightful tone. So it was great news when Shawn agreed to chat a little bit about his paintings. 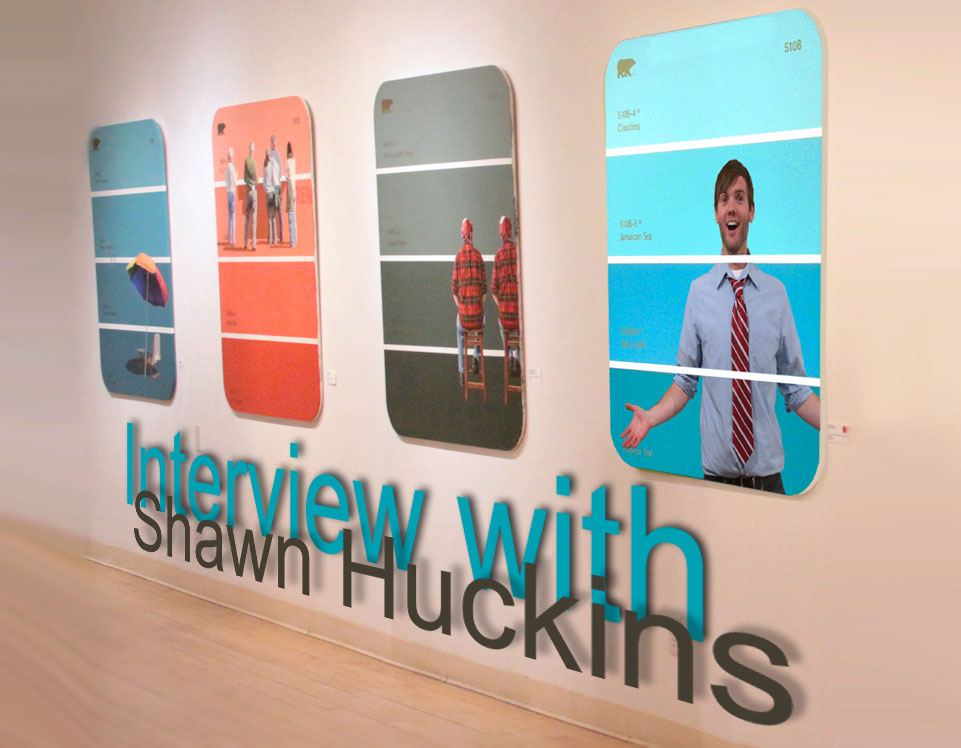 Taylor – “Have you seen Nick Smith’s Pantone Classics? He’s the one that created his own pantone swatches and arranged them to create the shapes of classic paintings? Reminds me a little bit of your Paint Chips series. The only reason I mention it is that he created his own paint colors, and I was very surprised to find out you went with the standard Behr color numbers and names. I’m guessing there is a great reason behind the exact duplication – could you fill us in? And while you are at it, do you remember where you were and what you were thinking milliseconds before inspiration struck to turn the chips into paintings? heheh. I’m pretty interested in the creative process and how to create killer ideas alchemy like into gold. Maybe that’ll be my next startup idea if you give me just enough data to go to alpha with! heheh.”

Shawn – “I have seen Nick Smith’s work via the web along with details and did notice he creates his own names/colors.  I chose to use and replicate the cards because the whole Paint Chip series is about the mundane and finding beauty in the uncommon.  These little cards are like little miniature color field paintings…an ode to abstract painting…such as Rothko or the like.  And if these cards are little color field paintings, imagine what they would look like at a large scale.”

“I do remember where I was when the idea sparked for the Paint Chips. It was back in 2008 and I was working on a painting called Three Red Gas Pumps. I was having trouble resolving the background, so I figured I would use a solid color.  I taped several paint cards to the canvas to figure out which color to use.  Once I stepped back and saw the paint cards on the easel, I figured how neat it would be to blow up the cards to large proportions to see a large color field painting.  So the color field painting came first, then the subject matter came later when I realized they needed a bit more interaction with the viewer than just the color strips themselves.

Taylor – “You just had a solo show here in Denver (I’m in the Springs) which I had known about it so I could have come on up and seen your paintings in person. They look really quite large although they (the chips series) look perfect as a small representation of the original. How did the show go and what do you look forward to showing your work?”

Shawn – “Yes, I did just have a solo show conclude and it was a big success.  With the texting series (The American __tier), it allowed me to work at different scales which I love.  I felt limited to what I could do with the Paint Chips because they are always the same proportions…unless I switched to another brand name, but I wanted to keep it clean and consistent.  I typically don’t enjoy going to my own openings, haha, because all of the focus is on me and I just don’t like that.  But I do like to see people’s reactions to the work.  Most often it’s a combination of people laughing (with the work, not at me hopefully) and asking how I paint so technical with acrylics paints.”

Taylor – “Can I just say that it would personally kill me to scratch these kitsch phrases into these wonderful paintings of your text series?! I was looking at some of your process shots and the phrases are there from pretty much the beginning, so I guess it isn’t so bad. But, even so! I guess its the concept and the design that I love, and the commentary of the piece juxtaposing the frontier and our American ancestors with modern culture, so I totally get it. And yet… at the same time… debasing?  hahaha.  Is that reaction of mine atypical or normal? (Not am I normal… I am certain I’m not normal! Oh never mind.)”

Shawn – “The paintings in the text series are all drafted and composed (with text) before any paint hits the canvas. I typically do this on the computer.  That way I have time to think about the phrase before I dedicate time into the painting process.  I have scrapped heaps of painting ideas before hitting the canvas because the text is too goofy, too raunchy, or just plain stupid.  So, there’s quite a process before painting.  The idea is to contrast too ways of life, one being what seems like a civil, intelligent society to our modern day, short and sweet emotionless communication. I do mention in my artist statement that it seems to be that we have reached that point where we have debased the English language, but even so, it’s still a valid form of communication. It may lack emotion and intelligence, but it still converts a message.”

Tayor – “Are you planning to do any prints of your chip set pieces? I’d personally give an appendage for “370C – Walmart Employee” Although, it looks like its for sale! Hahah. Do you sell at a discount to non-profit employees!? hahah.”

Shawn – “No plans for prints for the Paint Chips…sorry! I do believe Walmart Employee is still available and I’d be happy to allow a discount (tell the gallery I said so, haha).  What that discount might be is a question for the gallery. (Art & Soul)”

Taylor – “Well, we wish you well on your show in San Francisco here in July. That should be exciting I’m sure. Any parting words of advice to those of us aspiring to artist land, but are trapped in the land of a 9 to 5? Thanks for taking the time out again Shawn!”

Shawn – “I was trapped in the 9 to 5 land for a few years after college and it did help me learn structure…but ultimately it’s pretty rad working for myself. The main thing to do is work Work WORK in every spare moment you have. Dedication and motivation are key and will eventually pay off.  I skipped fun weekends with my gang to paint.”