Oooh… and now these Godzilla prints can be seen out on BoredPanda as well! Super stoked.

I’ve been playing out on Society6.com for a while now. I’ve done a series of animal encounter prints as well as grammarian nazi prints. And they’ve done surprisingly well considering I didn’t think that they’d even be seen by anyone, ever. Heheh. But recently, one of my prints shot to the forefront of all the others. And it was my retro Godzilla print.

The genesis of this photo conglomeration was fairly simple. I had recently found a gorgeous extremely high definition photo, in the public domain, of the California coast. The photo was taken around the turn of the century… something like 1904, if I remember correctly. And I was absolutely in love with this photo. There was so much rich detail here… so much life. And I had fun zooming in on the little homes, and the factories, and seeing what life was like back at the beginning of the previous millennium.

About the same time, I discovered a retro Godzilla image (think man in a costume, 1960’s type vintage) that was was not taken in high resolution. So I used that image of Godzilla and I painted my own recreation of the beast, in equally high def, so that it would meld together nicely with the background vintage photo I had found. And then I laid them in together for an effect that I found mesmerizing. Add in some digital ash, and burning destruction in the background and voila. We have my most widely viewed and sold image out on Society6.

Since then I have found numerous high quality, public domain, photos of the turn of the century – each one more enchanting than the last. And so, not to be outdone, I have continued my Vintage Godzilla series because I love seeing this gigantic monster visiting times and epochs not our own. 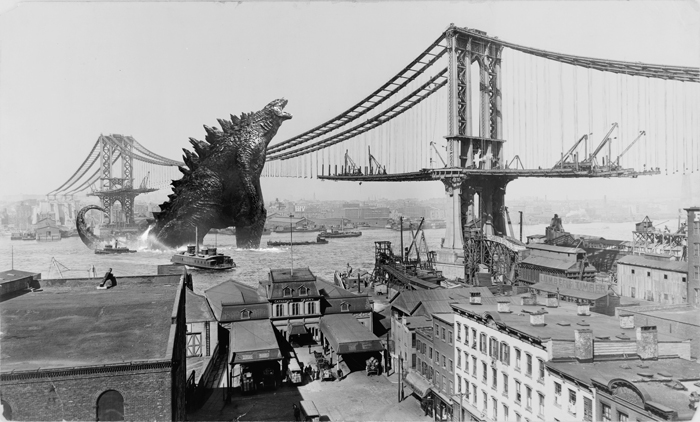 This photo of the Manhattan Bridge being built is interesting enough in it’s own right. But add our good friend to the fun? And I begin to wonder what is about to happen next. The construction crews have worked so hard to get the bridge this far. Is all their hard work about to be undone? And the passengers on those boats, that are floating dangerously close to the monster? Are they doomed to a watery grave? And what about these fantastic shops and hotels in the forefront here? Is he headed their way? Perish the thought! 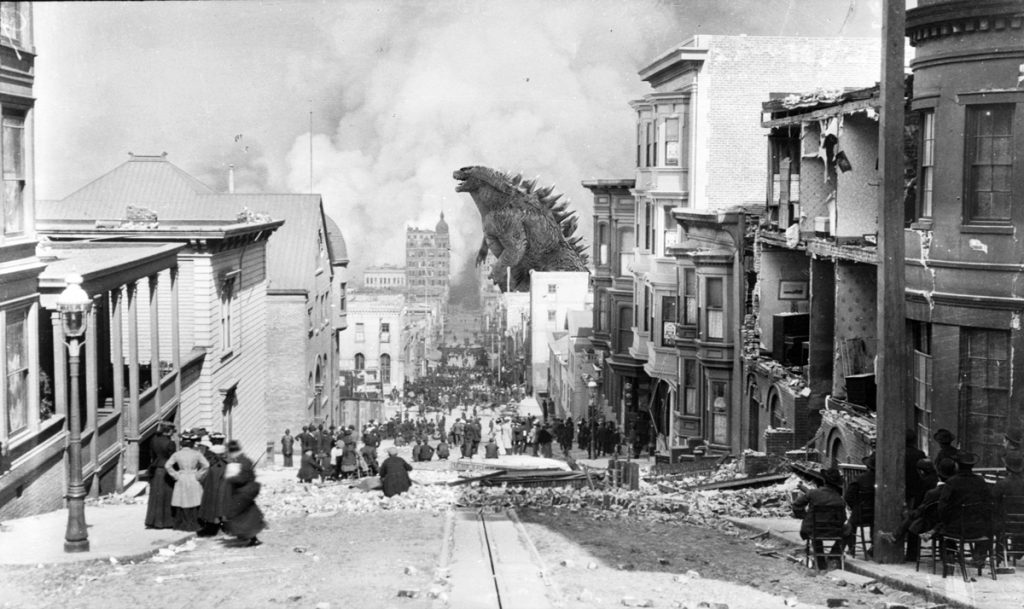 Next up is a clever coupling of a photo from the San Francisco earthquake of 1906. I adore this shot. You can see the destruction that the earthquake has wrought. The building faces that have come down. And the bricks and rubble throughout the street. Bet the greatest part? Are all the men and women, dressed nicely in suits, and petticoats, watching the fire, and the coming continued wrath of Godzilla. Will anyone save them? 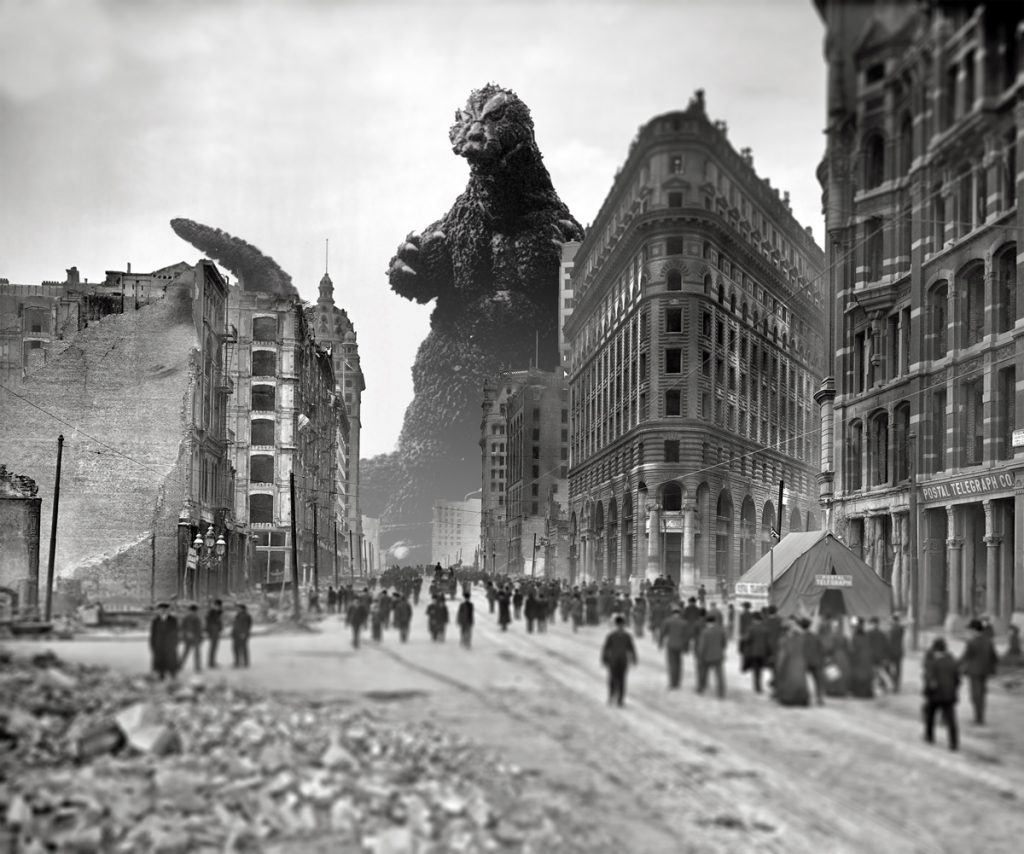 The San Francisco earthquake was caused by geological plate movements, wasn’t it? Or maybe it was because Godzilla paid a visit to San Francisco in 1906? Here we have another shot of the destruction that I chose to tilt shift towards the direction of Godzilla. But look at these buildings! And the red cross tent! and the suits, the bowler hats, the masses shuffling through the city street, dazed and confused after the chaos. This is a fantastic photo! (Minus the Godzilla bits, I mean.) I just adore this thing. 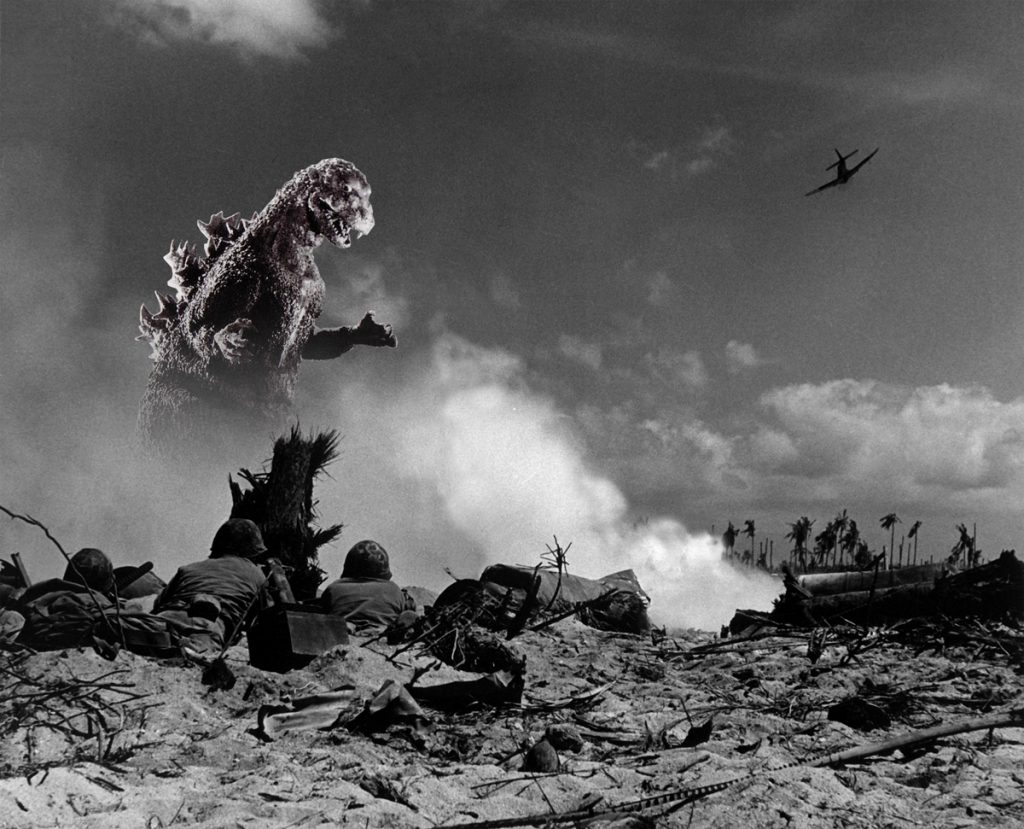 Here we have another reinvisioned history that sees World War II as a Godzilla response. This photo was taken on one of the islands in the Asia Pacific region. American soldiers are bunkered down, looking for their chance to respond to the great lizard. Airplanes buzz the sky. I heavily doctored this original photo by adding large plumes of smoke, removing trees from the foreground, and shifting things around generally. I liked the end result though, in that it placed Godzilla in a more natural environment for the beast… at war with his enemies. 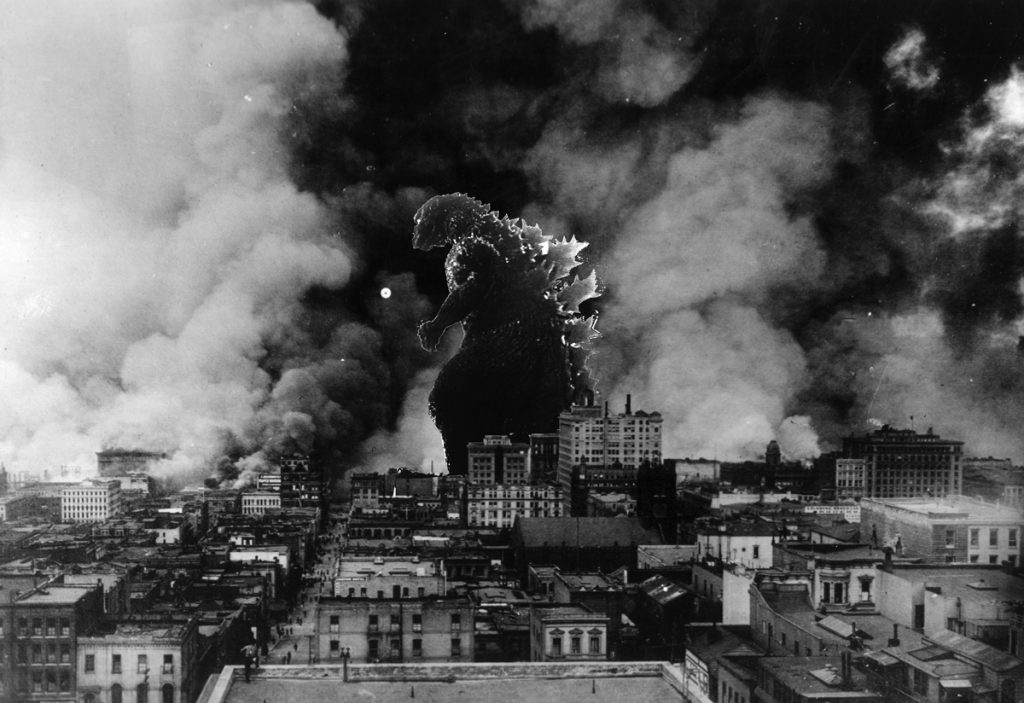 I returned back to the gorgeous photos of the San Francisco earthquake and fire for this one. This photo is a bit more of a found footage version, being that it is too dark, and grainy and with lots of noise. But that is what I love about this photo. It really could be real. If someone ran up top of a roof in order to catch a glimpse of the beast attacking the city, and pulled out his hulking camera to take a photo as fast as he could, this is most likely what he would get. Something overexposed. Something a bit too hurried and chaotic. I mean, he should be up there in the first place. It’s a dangerous thing to do when technology is so finicky and difficult to operate. But it is a beautifully realistic shot all the same.

In order to pull this one together I duplicated some of the clouds in the background. I had to darken the overall photo. And then to match the rest of the surroundings, after painting this Godzilla I had to darken him considerably, and grainy him up a ton. I also had to back light him a bit in order for him to be viewable against the dark clouds he has caused. 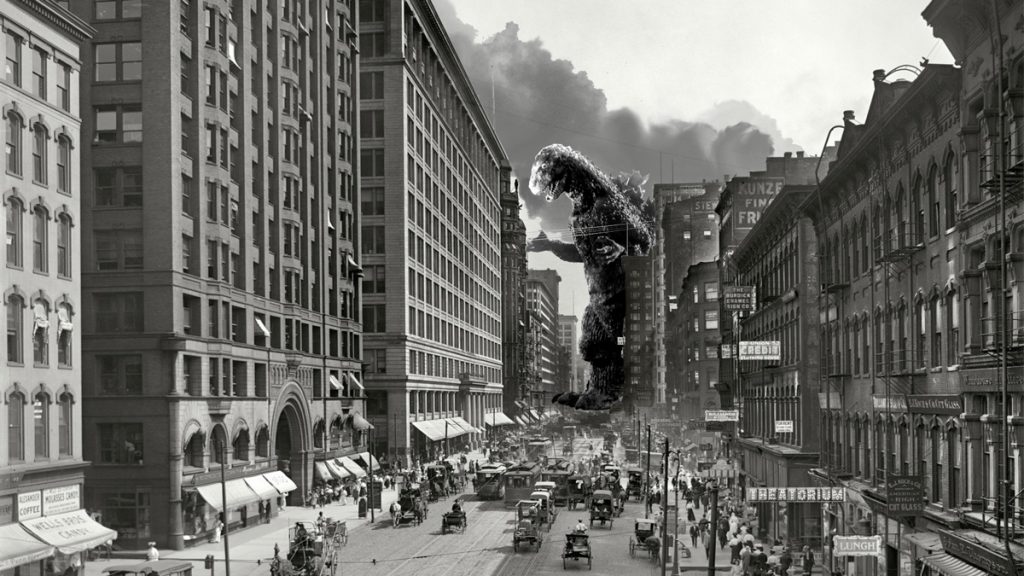 Which brings us to one of my favorite prints I’ve done so far. This one is of the bustling Chicago metropolis, in 1905. We see the city just hopping with life. Cars zipping this way and that. People thronging the sidewalks and the air of the city is just electric. But, down at the end of the  street comes Godzilla. And he finds the metropolis just as exciting of an adventure to navigate.

Notice the shadow of Godzilla’s foot, and the imposing shadow he’s throwing up against the buildings. The smoke curling up behind him in the distance tells the story of what is coming the direction of this street, and the clueless people that are currently cluelessly going on about their day. Or maybe they know him well? Does Godzilla come through often? 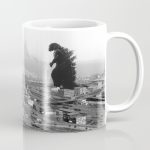 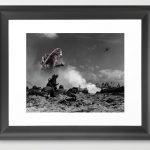 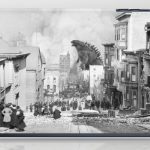 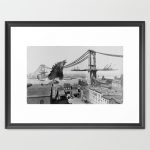 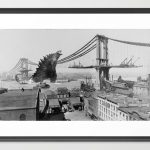 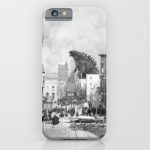 Interested in adding these fine quality prints to your day? Well, heck… I’m glad you asked! You can add all kinds of paraphenalia right here!