Awful Horrible Warcraft Review From a World of Warcraft Idiote

So let me give you my case for why Warcraft should sweep the Golden Raspberry Awards this year. Not only should it take the title of the worst movie… but worst actor, worst actress, worst screenplay (especially worst screenplay), worst CGI, worst music, worst scenes with an Orc, worst movie based on a game, worst EVERYTHING. The only Razzy that Warcraft won’t win will be the Razzy Redemption Award. And that should be self explanatory. But instead of explaining exactly why it’s so bad… watch this Ninja Review of Pirates of The Carribean 3 – and in stead of Pirates, substitute Mages, and instead of plot-lines, replace it with Numerous Plot-Lines, and instead of Kraken, replace it with ORCS. ORCS! ORCS! ORCS! And you’ll have a good sense for what this movie is like, but then multiply that by infinite, and you are still shy by half.

Warcraft was initially released in the Philippines way way before the rest of the world, because of it’s enormous love for the World of Warcraft.  And I happened into the movie on opening night – quite accidentally – just as a way to stay awake and to help acclimate to the timezone. Which brings me to my first disclaimer. I had my passport stolen in said movie theater whilst watching this film. But truth be told? I enjoyed my pickpocketing a heck of a lot more than I did this movie. I enjoyed the 3 hours waiting in line at the embassy. I enjoyed the hours commuting in to Manila and back out again. I enjoyed the paperwork, the proving that I was an american citizen, I enjoyed it all WAY WAY more than I did this movie. But just shotgunning hate out at you all doesn’t do this movie justice.

But before I berate this movie for the steaming pile of horse dung that it is – let’s conjecture on why, oh why, it could have possibly gotten out of the production house like this, like, at all. Let’s consider how maybe Aliens showed up, and at gun point, forced the movie executives to inflict this movie on the unwitting public, simply so that these same Aliens could decrease our defenses before taking us over and annihilate our planet wholesale. Seriously though, could it be that someone that actually gave a crap about the game World of Warcraft forced the screenplay author to continue shoving ideas into the script until it touched on absolutely everything the game ever hinted at in order to make it as “authentic” as possible? Could it be there were zero editors (or better yet psychologists even) on this effort? Could it be that the Director didn’t realize all of humanity couldn’t have digested so many plot lines even in 10 consecutive movies? Could it be that someone in Hollywood pitched the idea that more was less? Or maybe, they just assumed that everyone who had ever downloaded and installed the game would instantly go and watch it, and so, therefore, it didn’t really matter what they put in the movie?

Generally speaking, movie adaptations of games suck. Don’t believe me? Here. Here is the empirical evidence. So why do movie studios keep doing it? I have no idea. But they shouldn’t have made Warcraft. That’s all I know. Up until I had the ill fortune of watching is trainwreck of a film, I thought Ishtar was the worst movie ever made. And as such, had taken on a sort of a fantastical awesomeness about it. There was joy in my voice when I spoke about just how bad Ishtar was. But now, when I speak of the worst movie ever made, there will be no joy. There will only be confusion and befuddlement.

Warcraft Overview As I Understood (or didn’t) It 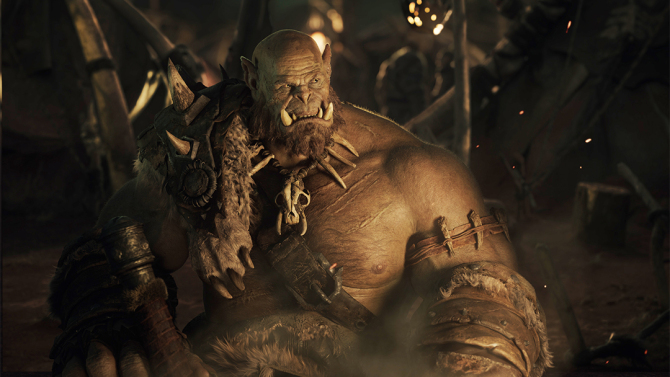 Personally don’t think any of this is spoilers because the movie is so bad I didn’t even understand it. But some of you, who may actually care, will probably consider lots of this inscrutable-ness spoiler material. So read with care… or don’t? Up to you. Have you see the tweets by people describing a hockey game that have never seen a hockey game before? Or tweets from someone who’s never watched star wars before? That is what this post is going to be like… except it’s from someone that has absolutely no idea what a World of Warcraft is. But I’m going to do my best to explain to you what happened. But ultimately – I will fail miserably.

So yeah, let me see if I can walk you through the plot of this movie, at a very very high level.

There’s a place, where humans live, that is nice and green and lovely. And there is a place that Orcs live, that is in some other time dimension (I think?). But their world has ben gnawed to the bone and raped and pillaged by some guy that consumes souls to get more powerful. But every time he consumes a soul, it burns the land out. (I think?) So super mean – soul sucker – builds a portal to the human world in order to have a lovely land to take over and inhabit.

And all the Orcs love this idea. Taking over a new land is awesome. Except, there is one Orc, and wife (that is pregnant), who may or may not be cool with it? Because, who knew? Orcs have feelings too. And these two orcs may be done with all the pillaging, and what not? But heck, they join in on the initial group that will go through the portal and capture more souls to sacrifice which will in turn allow them to send through more orcs. Right? Blech.

Oh wait… let’s just check wikipedia to see how far off I am so far:

“Draenor, the homeworld of the orcs, is dying. A green-skinned orc named Gul’dan unites the orcish clans into an army called the Horde, promising to lead them to a new, lush world — Azeroth. However, the strange magic Gul’dan wields, the Fel, requires draining life to sustain the portal; through sacrificing the captive draenei, Gul’dan leads a small warband to capture prisoners en masse on the other side and sacrifice them to bring the whole Horde through. Despite their doubts, Durotan, the chieftain of the Frostwolf clan, his pregnant mate Draka, and his friend Orgrim Doomhammer all join this initial strike force.”

Back on the green side of the house (apparently called “Azeroth”), men begin to realize that something bad is beginning to happen. One mage, priest, magician fellow notices that these attacks by Orcs are coming out of nowhere, and that they are killing the land. He captures a half Orc? And makes her swear allegiance and support to him? And it is through her that the humans are able to track and investigate the Orc’s coming and going. The half orc is freed, as long as she’d swear allegiance to someone or other. And she then begins to help secure negotiations between the Orcs and the men? And they get attacked in the middle of the negotiations by other Orcs? 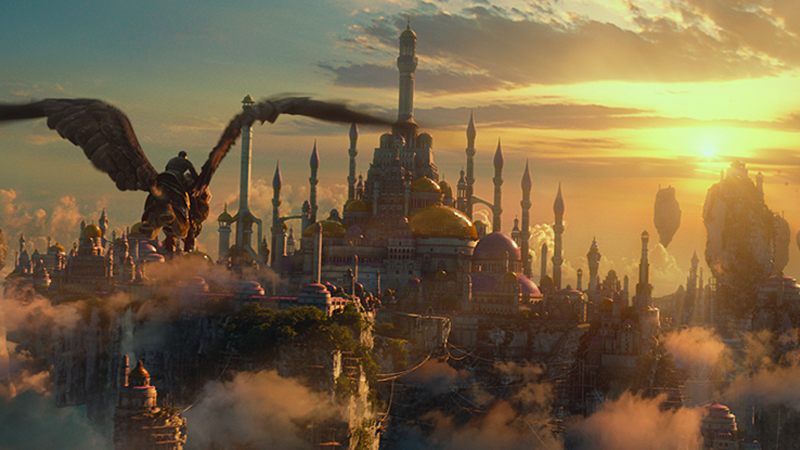 All the while, another side-thread arc starts up amongst the mages of Azeroth? So the newb-mage the discovered the fell contamination (is that what it is?) needs to head to a kingdom in the clouds for some reason to find out what is going on in mage world. The head mage is going kind of squirrelly for some reason. So newb-mage goes and discusses the craziness going on down on green-land and begs for an answer. Apparently Head-mage-guy (his new official title) has been battling internally some sort of a fight over being demon possessed, and ultimately, he just gives in and decides to be fully demon possessed? Which means, he’s obviously heading over to help head evil-soul-sucker-Orc. Because duh.

And then… woah, hold on – WHAT?! Glen Close is in this movie??! How did this come to be? What failure of all that is good and holy happened here?

The King summons a war council and decides that they ought to use their forces to contain the enemy and push them back. Another faction believes men should beat back the Orcs at the portal and cut them off from reinforcements. In there somewhere the king’s son is killed and there was infighting with other people I didn’t really understand. And we also had infighting amongst the Orcs as they realize that the Fell magic is evil and that they were so much more than Orcs. Just because they were big and green didn’t mean they had to be evil. Or something. And so there is squabbling for control of the Orc legacy and destiny in this new country of men.

And now I am wondering what the hell I am doing summarizing a completely incomprehensible movie to you. It gets worse than this. There are battles. And there are flights of pegasus and unicorns or something. And there are scenes of hand to hand combat. And then as the movie winds down, we see that the movie makers are not content with wrapping this movie up in a single 100 minute viewing. Loose ends begin opening up even as the movie is ending. The Orc son is born, and he is prophesied to be important… or something. And huh? I really don’t know.

I heartily dislike super hero movies. Mainly because it’s impossible to kill a super hero – and therefore, it’s impossible to care about something that can’t die. Even worse though than a super hero movie, is a video game movie that tries to cater to geeks that care more about the minutiae of game-play than they do about compelling narrative. Personally, my worst fear is that Warcraft makes enough money to make a sequel. To tie up valuable artist skillsets, CG artistry and Hollywood skill that could be donating their time to emboldening brilliant screenplays for brilliant authors like Shane Carruth, and his ilk. This was the worst use of my 6 bucks (it was the Philippines… it was cheap) I could possibly have ever devised. X-men was sold out, truth be told. And even better than X-men would have been completing the last season of Breaking Bad I haven’t finished yet. But I digress.

This was an awful. Terrible. No good movie. And I’d really be thankful if someone could develop a technology that will allow me to get those brain cells back. Because, woah, was that a waste.