My Movie Arrival Rabbit Hole That Swallowed Me Whole

I have written, and rewritten, and rewritten this stupid post. There will be 12 of you that will read it, and yet, I continue to write and write and write. But when I start pulling at a thread, I PHYSICALLY CAN’T STOP. There must be a mental disorder behind this tendency of mine. Like, a certifiable, for real, mental trauma, that causes this sort of Rabbit Hole OCD. It began with a simple teaser trailer… what? 20 seconds? And ended with 200 pages of reading, a quasi-interview, and an exposition about possibilities of film when juxtaposed with the cerebral? Gah.

So, with that said, let’s just begin at the beginning. And when I hit the end of the story, I will just stop. Or I’ll try to anyway. Promise.

This was the prime mover that kicked this whole series of events off. My brain went, wait, WHA? I know this story! I think. What is it based on? And sure it enough, I did. The story is based on a short story by Ted Chaing called, “The Story of Your Life”. And it is phenomenal. And immediately I went and found it again. Which, you can read here: STORY OF YOUR LIFE by Eric Heisserer. Once I had it in my hot little hands – I did not just say I had LITTLE HANDS. I do NOT HAVE LITTLE HANDS! Sorry, different blog post entirely. I began reading it yet again and fell in love with it all over again. Such a great story. Heady, cerebral, and inside out. Really really good. 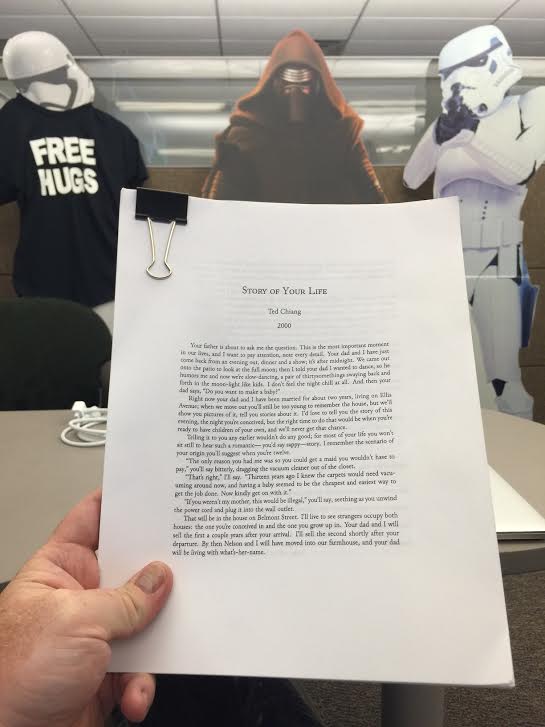 A little explanation about the photo of me holding the story over there on the right… Those guys behind the story protect my desk at all times. Don’t you have storm troopers and sith lords protecting your stuff?

One of my storm troopers though, is wearing a “Free Hugs” t-shirt, which I was given a few months ago by grandfather boss. What does your boss’ boss’ boss give you? Yeah, shush. So, I made the mistake of saying at one town hall with over 150 people present… “You guys are all amazing, and do great things for our mission and purpose. I know I’m not very touchy feely and don’t express this often enough, heck I hate hugs… but thanks for all you do.” Or some such drivel. And two days later he comes along and gives me a hug (which everyone seems to do a heck of a lot more now, huh, who knew that would be the outcome?) Thus the “free hugs” t-shirt. Figured that wouldn’t go unnoticed. But it didn’t cross my mind until after the picture was taken. Anyway, back to my rabbit trail of a rabbit trail.

Upon rereading it, my thoughts immediately went to, holy HECK, how is someone going to turn this into a Hollywood movie? How is this possible? It physically is impossible. What was this screenplay author thinking to have even attempted it? I mean, every time Chaing writes something (which is only like once every 5 years) we get an award winning short story. Every time. Without fail.

But did I mention to you that the story was super heady? Yeah.

So after seeing the pre-trailer-teaser thing, and re-reading the story that I had enjoyed years before, I went looking for the clueless individual that took on this Quixotic task. And apparently it was a guy that goes by the moniker of Eric Heisserer. I had never heard of him. But apparently his career launched with the sale of The Dionaea House to Warner Bros. Which, took me down a whole ‘nother rabbit trail. If you haven’t read the Dionaea House, it’s a must read. And you can do so here. I loved the story so much that I cold tweeted the poor guy and basically offered to make his story into an app in the form of Black Bar, Don’t Believe His Lies, and Able Black. Which if you don’t know those games… just stop reading and go get them. Just punch out of this entire rabbit trail thing, because it’s becoming regressive, even for me! hahah.

Which, gave me an introduction to Eric. His response was something along the lines of – Don’t know those games (or you) and will have to check them out when I’m not writing something WAY more interesting than tweeting with you… cough. No, he was very kind. But once I found him on Twitter oh baby… I had to know. I just had to know. So I asked:

@tayoflore It wasn’t easy. Took a few years. But the script is out there ever since landing on the 2012 Black List, if you’re that curious.

And then Eric went on to basically point me to how to get his script of the movie Arrival. Which was the answer I was looking for above any answer he could have given me in Twitter. By the way, if you are crazy like me, and totally love screenplays, you can read it, you’ll just need to find it first. I really don’t know if it’s legal or wha? Like if I’m allowed to link to them? So, if you are interested, search for Black List 2012, “Story of your life”. Eric’s name might help too? Or contact me directly, maybe I can hook you up. OR NOT. WHO KNOWS. hahah.

And so, where this tangential story stands right now is that I am reading Eric’s script, like fullon. I’m basically half way through it. But as it’s a physical print out, and I hardly ever sit and stare at print, I’m having to find weird ways to actually flip it open. But I adore it so far. Really really interesting take on the story. But I’ve decided that for now, I’m going to stop here. And once I create a part two, I’ll link to it here. But for now, let’s just stop at 1500 words of lead up.

The question still on the table is this – is it possible to create a riveting Hollywood film that makes money with a heady, cerebral science fiction as it’s source. Once I’m done reading Eric’s script I’ll let you know my conclusions. In the mean time, I’d love to hear from you as to what you thought of the most recent trailer. Which, if you haven’t seen yet, you can see below!

Also, I promised pancakes that I’d get around to finally reviewing Circle. I’ll have that out for you guys here too soon. Between traveling the south pacific, rambling wandering posts like this one, and selling my second home, I’m a little behind.