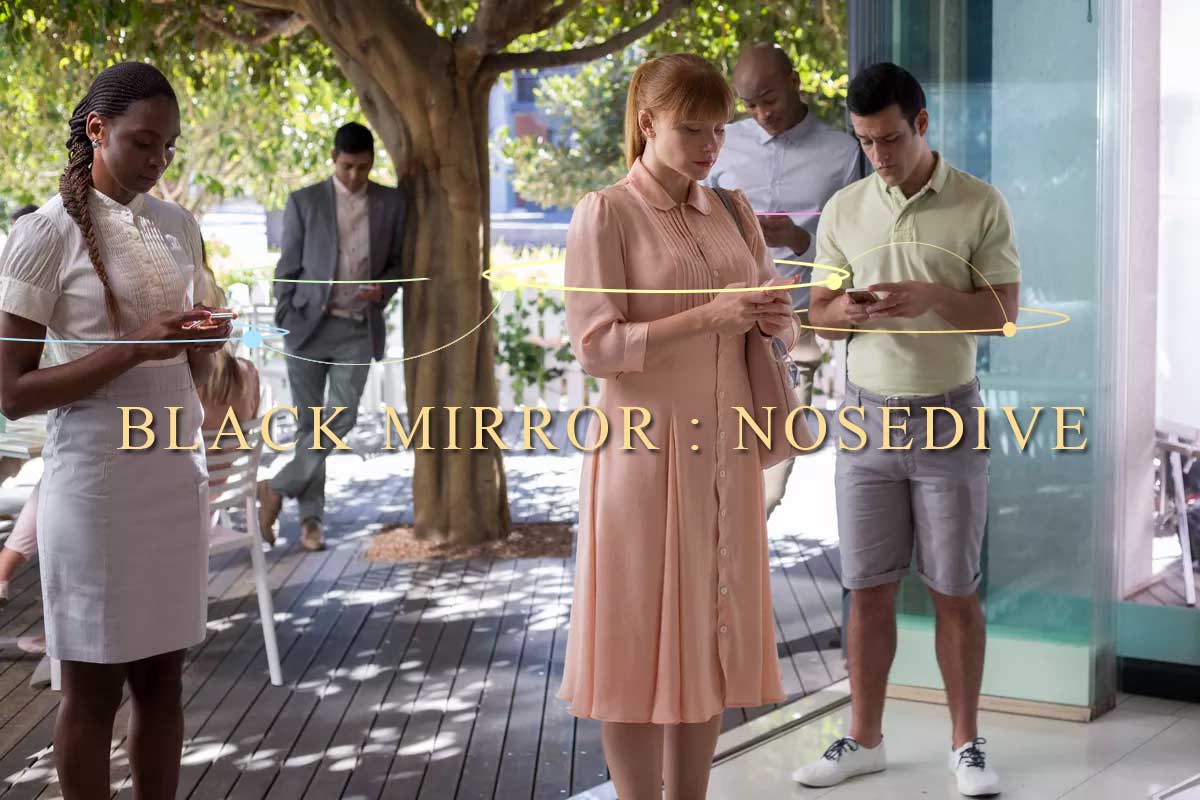 Of late there has been a lot more quality television out there than normal. I generally avoid all things tele, and mainly stick to movies for my entertainment. But wow, there has been a ton of amazing and I’ve been spending a lot more of my blogging time (it isn’t indefinite after all) walking through some of the better stuff I’ve run into. Shows like Westworld, and Peaky Blinders have just been blowing my mind of late. And now, Black Mirror Season 3 has hit and I’ll be going through each episode and discussing them in turn.

But first, if you aren’t aware of what Black Mirror is, it is (was) a Channel 4 show, that was best likened to the Twilight Zone for the modern era. Black Mirror grapples with the problems of technology, online addictions, hacking, future AI, and on and on. And now that Netflix has purchased Black Mirror, and negotiated the creation of 12 episodes… six of which have already dropped. And wow are these six shows some of the most insightful and scathing reflections of our society’s addictions and predilections.

The script of Nosedive was written by Parks And Recreation‘s Michael Schur and Rashida Jones. And Schur and Jones now have turned their attention to a hyper validation-seeking society that has employed social media ratings as the backbone for the entirety of this modern day Hades. Want to upgrade your apartment? You better have at least a 4.5 score to get in. Want to buy a car? Well, not without at least a 4.0 rating. You get the idea. Country clubs? 4.7 thank you very much.

Oh wait, you only have a 4.3 rating? Well, we have optimization coaches here to help you raise that ranking like a Search Engine Optimization. But out of nowhere, an invitation to a 4.7 party comes from an old best friend that hadn’t spoken to her in forever. Right? And the way in which the weighting works is critical to the understanding of what happens next. One word, weighted averages.  If you get a five star upvote from  a fellow 3.2 you probably get a little bump. But if you get a 5 star vote from a 4.7 you might get a massive bump.

And when Lacie Pound gets an invite from her childhood besty to be the maid of honor at this 4.7 level wedding? Manna from heaven… she’ll be a five before the week is out. People will be coming and begging our dear protagonist (ex-4.2) for votes now that she has arrived.

Very quickly this episode goes in the toilet… because, let’s be honest, all Black Mirror episodes do at some point or another. Lacie’s life goes from a fairly good 4.2 rating and half decent job to a startling crash to a sub 4, 3.7 rating after a violent encounter at the airport. She is given a warning, and then a double damage multiplier for all future interactions that spirals her rating lower and lower and lower. Next thing Lacie knows, she’s missed her flight, and is now headed out on a Planes Trains and Automobiles reenactment from hell. And along the way her rating continues to crash lower, and lower.

As Lacie gets closer and closer to the wedding – she meets a truck driver that doesn’t give a lick what anyone else thinks about her. She doesn’t care and she’s happy to tell you that to your face. And it is through this philosopher-cum-truck driver that we are supposed to understand just how horrible this entire system has become. But Lacie doesn’t learn her lesson from the truck driver. Instead she valiantly heads ever onward toward the wedding in a final fleeting, and desperate hope that maybe, just maybe she’ll be able to turn her score around. And in a scene right out Mission Impossible, Lacie sneaks into the wedding, hell bent on giving that speech… getting those votes, and saving her reputation.

Our fearless protagonist Lacie just doesn’t get it. She doesn’t understand that the system is broken and she is on an impossible hamster wheel of death. She didn’t listen to the tactless hero of our story, the truck driver, that was our moral Yoda. She didn’t grasp the hell she was living in. And she didn’t care one iota about anything but getting her 4.3 back, let alone landing that 4.5 that she needed for the apartment she wanted to move into.

But Lacie should have known much earlier. Lacie should have understood how she was being used when her besty told her straight out that the ploy of bringing in an outsider 4.3 into a group of 4.7’s tested well. That the entirety of the wedding speech setup was a coy plan to up the Naomi’s (the bride) own score, not to help her friend out. That the 4.7 wedding play was just an attempt for Naomi to get into the social bigs, from a 4.5 to a 4.7. She was marrying up. And seemingly helping a 4.3 was all a part of the plan. Lacie should have stopped right there, and called it all off. She should have bagged out when she saw just how horrible her “besty” was. But no. Chasing the score was what everyone in society had been doing for so long that she didn’t know how to stop.

Reminds me of a Max Lucado kids book called the Green Nose. In the town of Wemmicksville, all the Wemmicks had taken to getting their noses painted. At first, Punchinello stood up to the insanity of having his nose painted. Silliness he thought. But when a cute girl he’d always liked told him he’d look better with a painted nose he was off to the races, and he got his nose painted right away. No sooner had he had his nose painted than everyone had gone on to get their noses painted red, not green. And off we go to the races. Green, then Red, then Blue, then Orange. You get the idea. And that is when the kid’s story has a very poignant point to make. You are who you are, and you are loved for being just the you that you are. You don’t need a painted nose. And it doesn’t need to be this week’s color.

All that to say, Black Mirror’s first episode has a good point. And that is, that we should all be who we really are. We should be ok being honest. And we shouldn’t chase after someone’s idea of who they think we ought to be. I personally think that Lacie didn’t learn her lesson at all… let alone soon enough. She did see the dust flying through the air, and she was shocked by it’s natural beauty. But I think that was transitory. And I do think she is trapped on that treadmill of approval.

So while the episode was brightfully cheery… and upbeat in spite of the 1984 qualities of the show, and even though the show presented a wonderful stiff upper lip, I think this is already happening today, and it is dreadfully depressing. We have already begun to rate each other… even if indirectly. (The app Peeple is hoping to change all that.) We have already worked so hard to put our best foot forward on Instagram and Facebook. Already we are doing our damnedest to make everyone think we’ve got it all together. And yet, we don’t.

And yet we don’t.

So, while I enjoyed this particular episode, I really don’t think we saw our protagonist learn anything really. Sort of. I guess this is open to interpretation at the end. The fuselage of swearing between the two convicts is supposed to make us think that she learned, I think?  And yet, if Naomi had reappeared to post her bail, and to re-invite her back to the wedding, to give the speech, to be involved again? She’d do it in a heart beat. No? I think she would. I really do. She hasn’t learned anything at all really. She knows she’s hit rock bottom… but outside of that I really don’t think she gets why. My two cents. Yours, love to hear your thoughts in the comments bellow.