Doppelgäng Me – a short story in 1 part 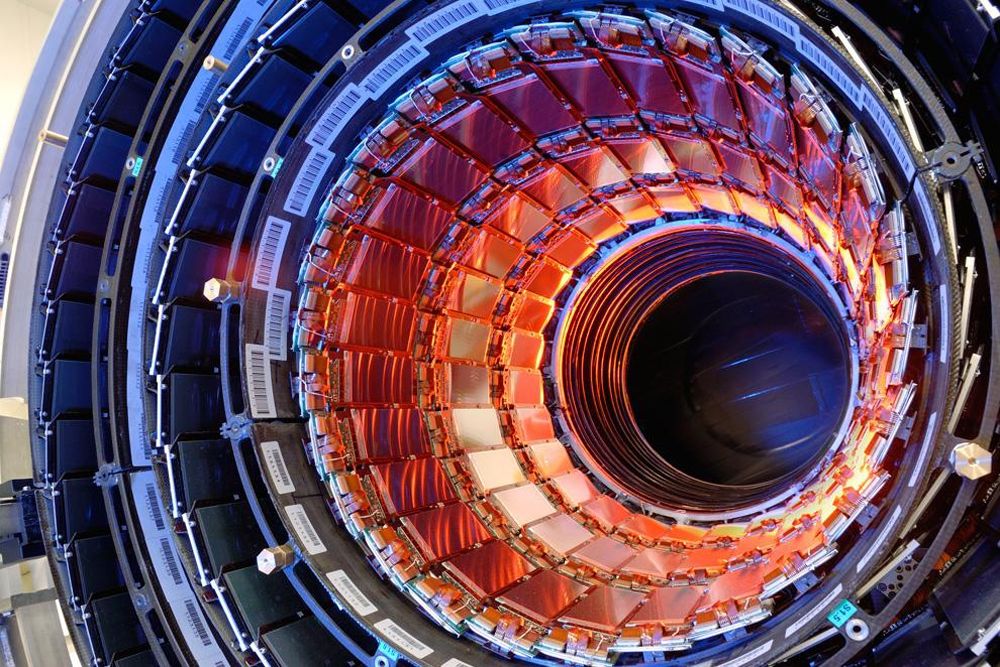 Doppelgäng Me – a short story in 1 part

The cracks that began forming at the beginning of the end were invisible to everyone… save for that of my wife. She had left a note on the dining table that I found after coming home from work just before I found her body, “Have you brought experiments home from the LHC? Random lights and craziness. You will kill me with your ‘science junk’ one day.”

For the next two years I was imprisoned and tried for the horrible and ghastly murder of my wife Genevieve. Which struck me as cruel and unusual punishment to be kicked in the teeth while I was already down. But apparently “witnesses” had seen the two of us arguing the night before in the local park of Saint-Genus-Poilly. Because that logically follows. Everyone that has a squabble with their wife eventually ends up brutally murdering them.

I began to notice the black oil six months into my prison stay. The oil seemed to pool under my skin, then seep and drip until it had completely leeched itself from the pool where it had eddied. Sometimes it would collect in my eyes. Sometimes the arches of my feet. But always would conclude by dripping from my skin until my body had finally purged itself of the contaminant.

When the trial was finally concluded, and I was found innocent I wondered if it was because the jury pitied me and my worsening oil condition or because they truly thought me innocent of my wife’s murder. On the day I was released I walked home from the town jail to the home that my wife had shared for more than ten years together. The cobblestones scraped beneath my feet, and seemed to resist my every step.

Once I screwed up the courage to cross the threshold of the house visions flashed through my mind of my wife’s dismembered body lying in the living room.

Split from head to shoulders to ribs, pelvis and knees… it was as if a an unholy samurai scimitar had carved her in twain. But there was no blood. The wound had instantly cauterized. It was a surgically perfect rending. Truth be told, I just think the note left by my wife had just enough playfulness to it to render the words ‘you’ll kill me one day’ inert. I actually don’t know how I got off.

And so here I was with my wife, and my haunted house unclear on how I was going to survive the night, let alone live another day. Which is when I saw him.

Several days later, still questioning my sanity I wondered if everything he told might actually be true. At first I had just assumed he was a result of the stress. I mean, my wife was split in two in this room a couple years before after all. But when I had asked to touch him he said it was impossible. Which I still don’t understand after all. But I realized eventually I could make him flee by intimating like I was going to reach out and grab him.

After that initial encounter, the auras began more and more frequently. They would start with a rumbling in the ground that quaked through my soles, to my knees, then up through my chest. Light danced in the air. It was a frisson – an electricity – a leaping of power and violin strings. Then a snap, a crack, and he would appear. Eventually he explained that I had to remain on one side of the wall while he remained on the other. (Though this was super weird because, there was no wall that I could see.) Understanding I thought him CRAZY, he grabbed a marker from the bedroom and sketched a slight curved path the bisected the entirety of the house.

Eventually I quit bothering ever crossing the line, and instead, I moved all valuables to the living room and kitchen. Afterall… why would I even bother attempting to sleep in a bed that once held the other half of my heart.

One evening, after two particularly intense auras, a bottle of vodka, and some weed I realized who my flatmate in fact was and I decided that I would trap him the next day with the simplest of tethers. The truth.

“I finally figured out who you are.”

The man tilted his head inquisitively and cocked an eyebrow.

“You murdered my wife didn’t you?”

The man began laughing. Shook his head as if to say, ‘boy is that a good one.’ then got up walked out the back.

The next day was a fairly big day as it was my first visitor since being released from prison. It was Andrin, my cell block warden. He and I had taken to playing chess together and he said no one there at the prison gave him ‘a run for his money’ like I did, and he just wanted to see that I was doing alright. I saw the flat from fresh eyes as I followed him to the living room.

It was dark. And smelled. And I had apparently taken to piling trash in heaps as opposed to dealing with it properly.

But Andrin didn’t let on that he was worried or even commented on the dark state of affairs in my apartment and I had to remember his normal dwellings in the town prison weren’t much better. Instead he pulled out a travel chessboard with so much as a word, and began placing the pieces in their respective locations. He pulled a chair up and gestured that I should do the same. And so I did.

As the Benko Gambit opening unfolded I found myself worrying that an aura would appear and would frighten Andrin. Once that particular splinter lodged in my mind I couldn’t stop worrying about the possibility. Andrin noticed too. My play was erratic. my pieces falling to the wayside as we abandoned the standard Benko opening. And then I noticed something even worse. Andrin had randomly sat astride the arc the man had sketched across the wood floor.

Noticing my staring at the floor beneath him, Andrin raised an eyebrow and asked if everything was alright.  “No, no, everything is fine. Why do you ask?” I deflected.

And it was then the the light began to pulse in pockets, and pool in swirls of yellows and pinks. Noticing the strange light show, Andrin swiveled about to get a better view.

Which is when the unholy samurai struck again – catching poor Andrin center mass and severing him in two from his groin to the top of his head. Collapsing in two heaps, his body piled one on the north side of the line and the other on the south side. And as Andrin’s body slammed to the ground my King, in a somewhat overly elegiac display, wobbled, then spun, and then collapsed off the back of the board, coming to rest in Andrin’s blank line of sight.

“Holy shit. Holy shit. What just happened? What do I do? What do I do?” And after 30 seconds of staring at Andrin’s split and cauterized corpse I realized I had to call the police. Having made that decision, I strode confidently towards the phone.

“We’ll hold on a second Tex. Think this one through.” He said.

“Think for just one second before you make that call.”

“Why? I cannot go back to prison. I will not survive another day back there again.” I said, as I walked back towards the arc on the floor.

“Exactly. Look at it from a jury’s perspective. They let you go once after you brutally murdered your wife. And now you kill your demeaning and sneering captor who was kind enough to pay you a friendly visit.”

“Dammmmit.” I wheezed out from between my teeth. “What do I do?”

“Well. The question really is simple enough. Who knows that Andrin came here?”

“Oh no. Right. No. There’s no way he told anyone. No way, absolutely not. We hid our games in the prison from the other inmates and guards. And scrawled our moves on slips of paper back and forth.”

“Bury him in the garden.”

3 hours later I was sick to my stomach, hot, dirty and extraordinarily sweaty. I had just buried Andrin… in effect twice. Once under the lilac and the second time under the shed. I was very unsure at first, but now? I thought maybe, just maybe, I might just get away with it.

As I came through the door after cleaning up and satisfied that no one would be any the wiser walking through the yard I slumped into a chair in the living room and just sighed aloud. And then I heard, from across the way, the sound of a receiver being picked up. And then ice shot up through my spine.

“What do you think you’re doing?”

“Me? Oh nothing, just making a quick phone call.”

They Look Like People Interview with MacLeod Andrews and Evan Dumouchel