All the Passengers Movie McGuffins and Moral Delimmas Explained 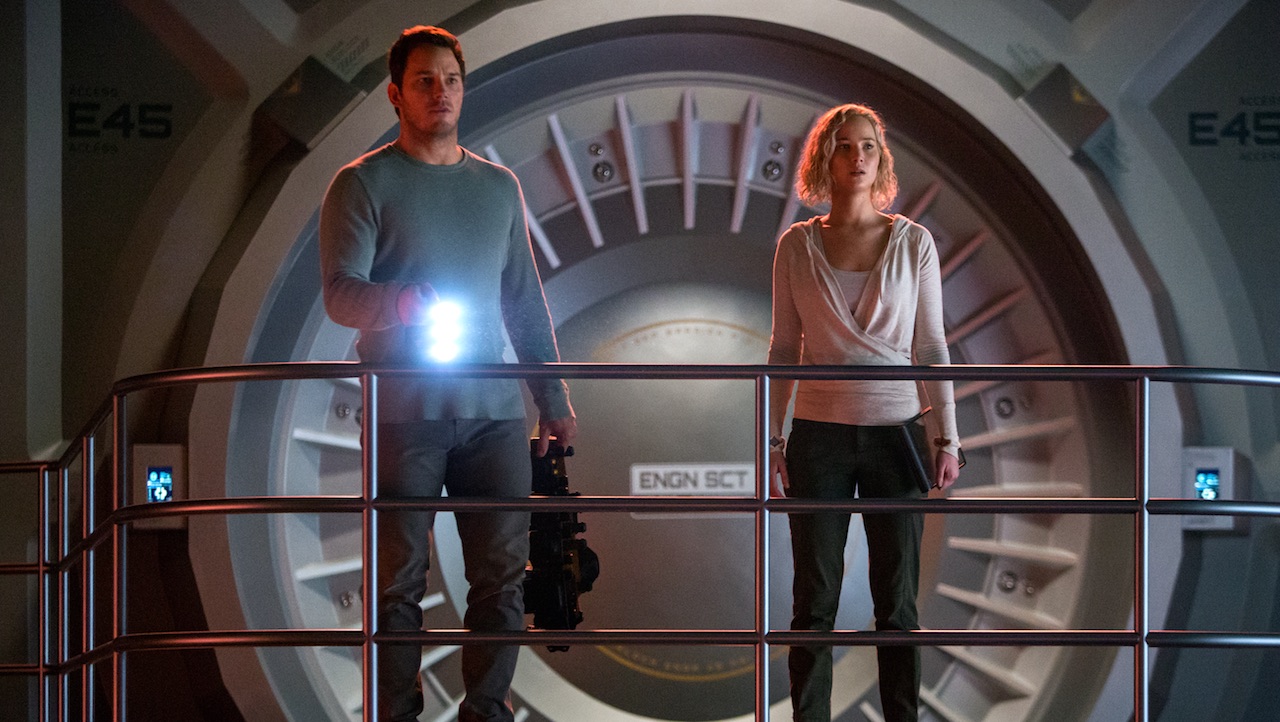 Red alert on the Avalon for Jim (CHRIS PRATT) and Aurora (JENNIFER LAWRENCE) in Columbia Pictures' PASSENGERS.
Passengers is a story that is set upon a really really bad foundation and then dashes it with Hollywood and hopes for the best.
Screenplay
Effects
Sets
Acting
Entertainment
Reader Rating2 Votes
1.8

All the Passengers Movie McGuffins and Moral Delimmas Explained

Alright class. A McGuffin is merely an object, a ring, a release valve, a device … a whatever, or a what have you, that solely serves as a trigger for the plot… to carry the story forward. To leap the action ahead. Got it? Now, class… can we name some of the more famous McGuffins in movie history? Yes, the Maltese Falcon, and sure, the case in Pulp Fiction. Those are well conceived and well thought out McGuffins.

But McGuffins can be evil story killing devices because they usually defy all logic or all credibility. Like in Avatar? The “Unobtanium”? Right. Awful. Terrible McGuffin. And sometimes, stories invert so badly that they need McGuffin after McGuffin to get themselves out of all the painted corners they find themselves in. And that, my friends, is exactly what happens in the movie Passengers.

“But it has Jennifer Lawrence and Chris Pratt in it.”

“Look at those special effects in that trailer!!”

Still not hearing you. McGuffins abound.

I probably should explain a little more. I generally don’t like bringing bad movies your way. It makes people angry. And people don’t listen. And we argue alot. It’s a ton more fun if I just bring you movies that I 100% endorse. But there are only so many of those. (Might do La La Land here in a little bit, we will see.) But I was so expecting this to be at the very least, CUTE, that I’ve decided I’m going to lay into it a little. But first I want to talk about the moral dilemma that just ruins this movie from the beginning. It is this moral dilemma that this film never really ever gets out from underneath.

Personally, I’d be happy if you took my word for it and didn’t go to see the movie. But if you are hellbent on not having the movie ruined – go see it now, and then come back. Because I am definitely going to be diving into a few spoilers that frame up this ramshackle, dilapidated hack of a movie.

The Moral Dilemma of the movie The Passengers

In the trailer – which I am NOT showing you, because yuck – the movie seems to be about a passenger ship going to another planet 120 years away. But, accidentally, 30 years into the flight, two blissfully beautiful people are accidentally awakened and cannot go back to sleep. Cinderella in reverse. Was it Cinderella? No no, it was Aurora, that’s right. Sleeping Beauty in reverse.

Except that isn’t what happened at all. Chris Pratt (who’s name in the movie is Jim? Really, Jim? Why not Luke?) is the one that wakes up when the ship slams into an asteroid. (Of which collisions, the ship is supposed to be foolproof against, and the sleep units, foolproof against those kinds of freak accidents, etc. etc. Titanic anyone?) So Jim (help us) is stranded on this ship alone. Well, not alone. There are 4,999 other passengers… but he’s the only one that is awake anyway.  For a year Jim can’t get into the Ship Deck, can’t get his sleep bay to reengage, he’s wide awake and going to die on this voyage and never see another person awake again.

Unless. Insert Moral Dilemma here. Unless Jim maybe can figure out how to wake this one particular gorgeous babe up.

Now, we are all collectively back in Philosophy 101. And instead of a Lifeboat where we have to decide which feeble non-contributing loser should get out of the boat and die because there isn’t enough room, we are talking about whether or not we should, in effect, doom someone to a life on board an empty cruise liner for 90 years. Well? Should you?

That is tantamount to murder. Right? I mean, you have no idea what her (or his, let’s not be sexist here) hopes are at this new planet. You have no idea why they are traveling 120 years away from Earth. You’ve read some of her writings. Sure. So you can see that she is a good writer. You’ve also stared at her longingly for months. So you deserve her right?

NO. YOU DEFINITELY DO NOT.

It’s possibly the least chivalrous act possible. (Maybe that makes it OK? because chivalry is dead? So confused.) Chivalrous, nothing! It’s tantamount to murder. Premeditated, 1st degree murder. But our gallant knight Jim decides to do it anyway. Because he’s the biggest selfish bastage in the history of man. But it’s OK because he chooses to keep that bit a secret. See? Ok!

And you may think I’m giving this thought way too much credence but I’m telling you, Chris Pratt is alone for the first 30 minutes. The next 30 minutes it’s all about Jim covering it up and not telling Aurora. Oh wait, did I not tell you that that is her name? Yes. Jennifer Lawrence’s name in this movie is, literally, Aurora. Sleeping Beauty. But this is most decidedly not Sleeping Beauty. Aurora is not on the same planet she fell asleep on. Aurora didn’t pay an exorbitant price for a 1st Class ticket for nothing. She intended to get to the planet she paid to get to. Right?

And the rest of this movie is the screenplay writer and director trying to dig themselves out of this moral hole they’ve dropped themselves into.

Enter the Parade of McGuffins

When Aurora (really?) finds out that Jim (bah!) woke her up intentionally, they are on the ropes. Immediately. No talking. No more dates. And just forget about that ring that you were about to give her Mister Jim-pants.

And just when their relationship hits the rocks the ship’s problems start escalating. The chaos increases. Because… you know… we have to solve this moral dilemma. First we get a member of the crew that accidentally wakes up next. And he has the access keys and authorizations that the two need. And oh by the way, his wake up wasn’t as good as our boy Jim’s and now he is mortally wounded – and dying. (Really?) And then we start getting dialogue like this…

Aurora –  “We need to find something that is broken. Did you find anything broken?”

Jim – “No, but those doors over there seem jammed.”

And from then on out it’s random McGuffin after another because none of it makes sense. Eventually, after getting further and further painted into a corner Jim decides he’s going to have to go outside and vent the dangerously hot fusion engines (or some other McGuffiny thing) because this McGuffin right here is jammed. And that one over there is jammed. So, bottom line? Jim is a goner. A dead man. (See where this is going?) But Aurora, our Sleeping Beauty, rushes out into outer space to save her evil minion/boyfriend… because you know what Dammit!?? She can’t live without him!

That Moral Dilemma Comes Back to Roost

And thankfully, she does save him. Thankfully our luscious couple is reunited. And we are all of one mind that we are hearing twittering birds and sunsets in our couple’s future. Except, that Jim basically doomed our beautiful Aurora to life of solitary confinement on a ship that is a 1,000 meters long. But guess what? Jim finds out that the Auto-Doctm can actually put a patient into hibernation mode. So Aurora gets a choice now! She totally gets a chance to bail on this guy. Because he deserves bailing on.

But no, Aurora (head slap) chooses to not take the salvation behind door number one. And instead, they make a life of it on the ship and live happily ever after creating a forest wonderland throughout the ship.

Right now, this movie is running like a 70% rating on IMDB. Seriously? (But a 30% on RottenTomatos, so maybe my faith in the world shouldn’t be as shaken as it is currently.) I can’t tell you just how much I loathed this movie. And some on the twitter-verse are banging it because of it’s inherent sexism. Ok. Whatever. I am banging it because of it’s inherent stupidity. Terrible writing is where the problems began. And the acting really couldn’t even save the bad writing. The performances were just meh. But it’s the back half parade of McGuffins that really makes me angry. There were a million ways to fix this movie. A million. But the chose to avoid them all.

What about a conspiracy with the Ship’s owners? Maybe they are actually just ejecting all the passengers into space, and bringing the ship back to earth as a different NEW ship! Maybe Jim and Aurora discover a super nova and an alien race where they shouldn’t be. The two actually work together to piece the clues together and solve the problem as equals. Instead, right now, we have a murder and a limp waif on our hands. And that just isn’t good for anybody.