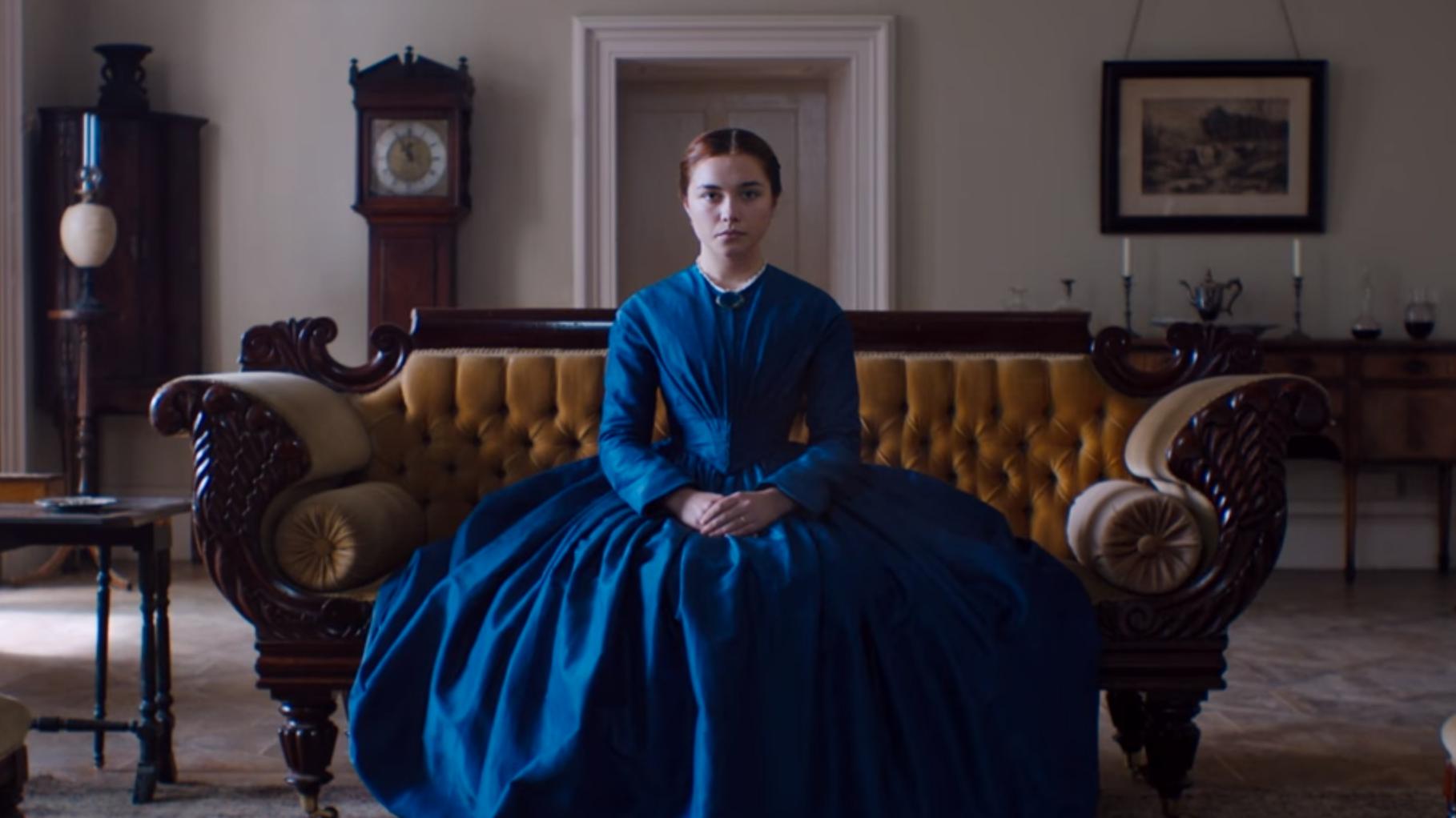 Watch Lady Macbeth online at one of these movie streaming confectionaries:

Were you paying attention in high school literature class when the teacher required you to read, discuss, and take tests on Shakespeare’s play Macbeth? Shakespeare may possibly have been the only time I paid attention ever. So when I heard a movie called Lady Macbeth was on it’s way out I had to check it out. Was it an allusion to Macbeth’s wife? What was going on? But even before it came out I had found a copy of the book/short story that was originally published in 1865 in Fyodor Dostoyevsky’s magazine Epoch.  If you’d like to read it, you can find it here.

Once I read the story I was all the more interested in watching the movie. And once I heard that it was going to be religiously adhering to the story by Leskov I was over the moon about this movie. Think giddy little dance steps and a flourish of a spin sort of excited. This, my friends is a great story. Dark, unnervingly evil, and compelling. It opens all kinds of gender issues and fascinating spiritual and political questions.

Lady Macbeth The Movie of a book of a Shakespearian Play?

Ok, so the story of Macbeth for those of you who didn’t pay attention goes something like this:

“A brave Scottish general named Macbeth receives a prophecy from a trio of witches that one day he will become King of Scotland. Consumed by ambition and spurred to action by his wife, Macbeth murders King Duncan and takes the Scottish throne for himself. He is then wracked with guilt and paranoia. Forced to commit more and more murders to protect himself from enmity and suspicion, he soon becomes a tyrannical ruler. The bloodbath and consequent civil war swiftly take Macbeth and Lady Macbeth into the realms of madness and death.”

Notice that quick bit in there? The bit about, “spurred to action by his wife”? Yeah, that’s Lady Macbeth. And while Shakespeare keeps Lady Macbeth a bit in the background Leskov’s story brings her to the forefront of this drama and then dials her to an eleven. And once the story circulated, it eventually became an Opera, and a ballet before becoming a movie. Yeah, this story has some legs to it. Here, check out the trailer, you’ll see what I mean – but if you haven’t seen it, I may actually recommend you just go into this one blind. Trust me. FOR ONCE DANGIT! hahah. Alright, many of you do trust me. I know I know. And for that I’m honored. Regardless, here is the trailer…

But from here on out, I am diving into the details of this movie and plan to tear them apart inside and out. If you haven’t seen the film yet, I’d look away if I were you. So yeah, the movie opens with possibly one of the most awkward introductions ever. “Take off your night dress.”

We surmise that Catherine and Alexander (I believe that was his name, he was called Zinovy in the book) have just gotten married. The marriage was arranged. And that Katherine (Lady Macbeth) had had her marriage arranged for her because she was poor. But soon, we are regaled with some of the most beautiful cinematography. Trailing banisters and trailing dress trains. It really is marvelously shot if oppressive, completely oppressive in its treatment for its heroine. We quickly learn that Alexander has zero intention to sleep with his wife, and soon is off tending to an explosion at one of his properties. (In the book it was a dam that broke… but all in all, the same situation.)

Boris, Alexander’s father, Catherine’s father-in-law, is extremely demanding of Catherine in Alexander’s absence. And while Catherine was alone she fell for a farm hand named Sebastian. (And a weird scene with a pig scale and a servant? That just didn’t seem to logically flow for me. Anyway.) But when her father-in-law came back he was all, tut tut this, and tut tut that. And that didn’t work at all for Miss Catherine, so she fed him poisonous mushrooms and locked him in the closet to die.

LUCKILY! He was an old fart and no one was any the wiser, mainly because the servant who knew anything went mute as a result. So the funeral was held, and Catherine’s husband refused to come back for the funeral. So Sebastian and Catherine began shacking up openly in the house, living like Countess of this, and Earl of that. Which was fantastic fun. EXCEPT! Alexander walked his horse up the lane, and snuck into the house while Sebastian and Catherine were asleep in his bed. Thankfully (phew!) Catherine sleeps lightly and heard him coming, hid Sebastian and faked a bunch of crazy non-sense (oh, the belt? I found that in the field.) But Alexander was already on to her because he’d heard from hither and yon that Catherine had been sleeping around on him. (Let’s all admit it, she was anything but discreet.)

Catherine finds out that her husband is on to her, so she brings him out, and then proceed to bash him into a bloody pulp. Now Catherine has a real problem on her hands. A non-old-guy-dead-guy-sort-of-problem. So Sebastian buries Alexander. And Catherine takes his horse out and shoots him several times. Then… throws some dirt on the corpse of the horse? I mean really? ANNYYYWAY.

And they are set. No problem. From now on it is the Sebastian and Catherine reality TV show. They are free in clear. The assets are Catherine’s. The house. Everything. And voila! Sebastian is a gentleman.

Only glitch (this is what this movie (or the book rather) does so well, just as things get righted, here comes a shove from right field) is that the Grandmother, Agnes, of a boy who is said to be Alexander’s ward, through a fling of some dalliance or another. Oh, and she’s got official papers and everything. (Anyone else feel like this is basically a season of Downton Abbey wrapped up in an hour and a half?) In the book, the boy is actually the rightful heir. Which, could be true in the movie as well, but that wasn’t ever covered or talked about in the movie.

So Catherine befriends the boy and the mother, and actually makes nice. And Sebastian has to hide because Agnes knows of Catherine’s philandering, and is suspicious that she killed Alexander (The book, she made a lot more nice. Like lots of nice nice. And Sebastian basically went nuts because of it.) Anyway, eventually the boy disappears. Can’t be found. So the town goes hunting for the boy. Which means that Sebastian has to run too. And eventually he comes upon the boy overlooking a waterfall, and the next thing we know he’s bringing the boy in, and is making a play at savior.

(Discussion point 4023 – did Sebastian chuck the boy in and then save him? hrmmmm?)

Interestingly enough, Agnes will have none of it. Orders Sebastian out. And in the middle of the night, while the boy is sleeping, Catherine tells Agnes to go get some sleep. She’ll watch him. And, like a dolt, she does it. ‘Cause 2 hours of sleep will just be so helpful. Anyway, while Agnes is beauty sleeping, Catherine lets Sebastian in, wherein they suffocate the little boy with great thrashing and gnashing of teeth.

Phew! The heir to Alexander’s throne is now dead too! Only glitch?!? (See! I told you that’s the brilliance of this story.) There are now bruises on the boy’s arms and legs. BRUISES! But they were caused by the waterfall. They bruise around the wrists and ankles always. It’s how they work really. Hahahah. So yeah, the boy’s murder isn’t going to fly. And Sebastian finally grows a pair, and heads in and admits everything.

“SHE’S SUFFOCATED HIM AND ME, SHE’S A DISEASE!”

And with a pregnant pause to end all pregnant pauses, Catherine, who is trapped as trapped can be, stares and stares and stares… And then she says, it’s all Sebastian. I wanted nothing to do with his plan. And Anna? She picked the mushrooms, not me. And didn’t Sebastian kill Alexander the day after Alexander beat him within an inch of his life? I mean, what motive do I have for killing my husband?!? We were so happily married! Hahahah.

I adore tragedies. Absolutely adore them. All the Shakespearian tragedies were worn thin from reading and re-reading them. (Bet you didn’t know your eyes could wear down the ink on a page. Well, now you do.) Hamlet being my absolute favorite. Romeo and Juliet were fun in high school. Othello is fantastic. Macbeth too of course, or even King Lear. Just line up the corpses and someone with a ledger keep a count please because we are going to soon lose track!

If modern tragedies are your thing, I can’t think of a better movie tragedy than the House of Sand and Fog. (yes, I can think of many others.) But wow, oh how I adore that particular tragedy. I thought I’d written about it, but apparently not.

Regardless, Catherine is evil. Pure, unadulterated evil. And that this book discusses women’s roles and assumptions about correct decorum and expectations way back in 1605? And totally turns the tables? Amazing! True, many parts of this movie are hard to watch. The horse shooting, the child smothering, the husband bludgeoning. Etc etc. But I loved this movie. Unexpected at every turn.

The screenplay basically just lets this story run. The visuals are gorgeous. The acting very good. I really don’t have anything to say that is really horribly negative. Sure, the screenplay could have smoothed some of the rough edges from the story. But generally speaking, a really well played script.

What did you think of it?