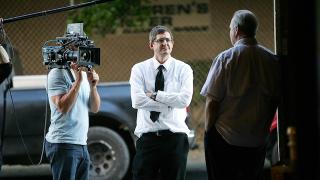 Having completely run out of fantastic sci-fi, mind bender, inside out, craziness to watch and bring your direction, last night I decided to dip my hand back into the world of documentaries for a chance to find something to talk about with you all.

I have actually considered staying up with Scientology a minor hobby of mine. Sort of a, I can’t look away from this amazing car crash, sort of a thing. It really started with an amazing New Yorker article entitled Apostate. Apostate is a brilliant 25,000 word read over on the New Yorker that is like a fantastic primer on the “church”. And it was Apostate that was the initial backbone for the book Going Clear. Going Clear covered the exact same ground, but expanded the territory with more interviews and more detail about what the original story covered. And because it is all just one mind blowing revelation after another I couldn’t stop reading.

Then, Going Clear went from article to book, and them from book to documentary. The documentary is called, Going Clear: Scientology and the Prison of Belief. What Going Clear is extraordinarily good at is defining what Scientology is, how it was created, and then how it came to mind control so many influential actors in Hollywood. It was amazing pretty much in every format that it attempted. So yeah, I highly recommend Going Clear if you don’t know much about the church or what its goals and drivers are today.

Which brings me to My Scientology Movie. The movie documents Louis Theroux’s investigation into what goes on behind the current of the Church of Scientology. Louis Theroux is a funny, low key, yet persistent journalist that has begun to make a name for himself by chronicling spiritual bizarreness. His has previously done two documentaries on the Westboro Baptist Church which served him well for taking on the Church of Scientology.

But if you know really nothing about the church you’ll probably still be a bit in the dark. It isn’t really great at explaining the church’s start or how we got to where we are today. But where My Scientology Movie excels is in the investigation of the mind control and the brainwashing aspects of the church. To have so many willing individuals accept abuse and confinement at the hands of an autocratic and dictatorial religion just doesn’t make sense at the face of it.

So when Louis Theroux is stopped time and time again from being allowed on the church’s properties, let alone interviewing anyone, they hit on the idea of reenacting the intense mind control practices inside the gates. In order to nail this, Louis brings in Marty Rathbun – who held the position of Inspector General – in order to walk us through the methods and the techniques. And I’m not exactly certain how Theroux expected to get inside the church. Their reticence to allow outsiders in is extraordinarily well documented. But it is this failure that precipitates the strongest asset of this movie, which is the documentation of the Church’s mind control efforts and capabilities.

And so for me, having studied up on the Church for a while, having read a number of books on the topic, and who is well researched on the topic, having a deep dive on this section of the church was really fascinating. I didn’t really grasp how the interviews worked as a mind control method. I didn’t understand how the low-tech lie detectors would augment and support this effort to mind control the members. But seeing Rathbun at work and watching him breaking Louis down… or another actor down… is just fascinating. And worth while in and of itself.

So yeah, if this is your thing, and you are into this kind of hobby-like study and interest… then yeah! Check it out. I started it last night like at 1am. Really tired. And I couldn’t stop watching. 2:30 am rolls around? and my eyes are like fullon, wide open and unblinking. Which, I guess, speaks for itself. But I am not certain if that is just because of my own interest in the topic or if its because the movie was actually good. Like, zero idea. But let me take a guess here and say this… if you made it all the way down to the bottom of this little write up, then yeah, My Scientology Movie will keep you hooked all the more. So check it out and let me know what you thought of it!