Flatliners a Cautionary Tale Regarding Sequels and Reboots 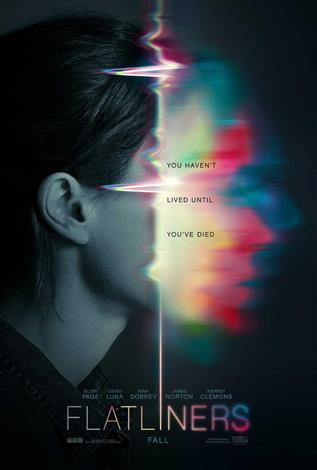 To say I was a fan of the original Flatliners movie is the understatement of the year. I genuflected in the general direction of my 1991 released VHS tape frequently, nay even daily. Sometimes I thought myself the most clever of all individuals in that (working at a local video store) I refurbished a busted VHS player that would auto-loop videotapes, and play them infinitely until the magnetic tape frayed and broke. (Which I became extremely adept at repairing myself as well.) There were four of five videos that I leaned towards ever-looping in my room, Bad Influence, Silence of the Lambs, the Untouchables, Goodfellas, Reservoir Dogs, and Flatliners.

Flatliners had a certain je ne sais quoi in my opinion. The juxtaposition of the high tech medical equipment with the construction site, the tarps and add in a dash of classical architecture, marble and the like? Nevermind that the actors were five of the IT actors of the moment: Kiefer Sutherland, Kevin Bacon, William Baldwin, Oliver Platt, and who could ever forget, Julia Roberts? Right? It was such an arresting and promising premise, who cares what they did with it!? Medical students, high on their own success and brilliance, decide to begin killing each other for longer and longer periods, in order to see what is on the other side. Hubris. Pride, obviously set for a fall. One of the greatest setups in movie history!

But now? We have Flatliners 2. Because that is what it is. Flatliners the sequel. Not a reboot. But rather Flatliners: Another Brush with Hubris. The problem here? It’s not. It’s a literal, frame by frame remake. I would actually argue that the screenplay writers shouldn’t even get credit for this script because it is similar to the original that it’s basically a word for word redux of the original. And heck, the acting details, the brushes with death. This movie is a modern day remake of the original, and yet, there is Kiefer playing the cautionary tale adviser/professor.

And let me just be 100% clear here – I was behind this movie from the beginning. Give them a shot. See what they can make from the old movie. I mean, Blade Runner 2 – 30 years later was a stunning, mind exploding, success. So why couldn’t Flatliners 2 be a success? Here’s why – it did nothing new. The story is exactly the same. Group of medical students start killing and resurrecting each other. As they do they become closer and share more about their past. They narrowly evade the law. But all the while they begin having visions… visions of dead relatives, girlfriends, valedictorians, sisters… etc. And they don’t share what they are experiencing. Sound familiar? WELL IT SHOULD, because it’s the same flipping movie. Exactly the same.

About the only difference was a few details about the ending. I’ll leave them out because I haven’t told you I was dropping spoilers… I mean, other than THE MOVIE IS EXACTLY THE SAME! Gah. The screenplay authors really should take a lesson or two from the authors of Blade Runner. How they took the ideas of the first and expanded them, pivoted and went in all new directions. Instead of redoing the movie, what if they had found a journal of Kiefer’s and learned from his research, and ignored the warnings? What if they did it to their enemies instead? Or heck, take a page out of the OA’s playbook and begin doing it to people they have trapped and study the results? No, I’ve got it… Inception like layerings. Deaths within deaths. They realize that they aren’t seeing visions of the afterlife, they are just seeing their own remorse. But within their remorse they learn that they can kill themselves again if they focus and that that is the layer that is beyond life – into the realm of the dead. (Not a half bad idea right there. And yes, I will sue you Flatliners 3 if somehow you’ve come up with this idea “on your own”. Regardless, do something different.

I almost wasn’t even going to write about the movie I disliked it so much. And no, don’t laugh at me for expecting anything less. Generally I am not optimistic when it comes to Hollywood remakes. But this is Flatliners dangit. One of the seminal movies of my youth. They had to have tried to do something great with it. But no.