The movie Caught is a really crazy cool little movie

The movie Caught is a really crazy cool little movie

Do you like closed box, small cast list, movies that are open ended, confusing and that leave you wondering what just happened? Well I stumbled upon a movie that fell into this catnip category that I want to share with you today, and it’s called Caught.

Now, if you are new to my site, I am not a film critic. I’m not a movie reviewer. Not even a little bit. I love movies too much to give movies bad reviews. I just won’t do it. I’m a hobbyist at best. But I adore movies, and love discussing them and unpacking them. If I start a movie, and it’s bad, I bail immediately. Each night I might start 2 or 3, maybe 5, before I actually am hooked and continue on. Why? Because I only want to bring you the movies worth pondering, the “great” movies. The under rated movies. Movies that are confusing or discussion worthy. But that means I discuss the entire movie, inside and out. All of it. And that is so that for some of you who are still confused afterwards that you’ll get it, it’ll make more sense. Then, from there we can discuss it all from the same vantage point. Here, if you must, check out the trailer, and see what you think. It’s a movie better taken cold. And yet, this isn’t a movie for everyone.

Quick Overview of the Movie Caught

There really isn’t a ton to say about this movie (he says before he’s even started writing, knowing FULL WELL what comes next will be at least a thousand words of nigh on perfect rambling and chaotic prose. (SEE! It’s already started for the love of all that is good and holy) but I will… oh crap, I’ve left you locked in Paren World! My apologies dear guest) but I will go over the highlights of the film. But it leaves more questions open than answered. It’ll be the discussion AFTER the credits roll that will be longer than before.

The Players of the Movie Caught

This is a simple simple simple movie. There are 2 pairs of people in this movie ultimately. We have Julie and Andrew. And we have Mr & Mrs Blair. That’s a bout it. And there are two kids that sort of effect the direction of the movie. But ultimately, we are watching a confrontation between two distinct pairs. One pair has zero clue what is going on. And the other pair is absolutely unhelpful from a communication standpoint.

Julie and Andrew – Mickey Sumner and Ruben Crow play our two hapless protagonists. They are something of citizen reporters. Andrew is a photographer. And Julie is something of an investigative journalist. We get the sense that they made a gamble on a book or a big project that didn’t exactly work out. But they are scraping together work as they can find it. They’ll do whatever it takes to get their career heading in the right direction again. And their newest potential story? Happens to be about the military massing up on the moors somewhere just outside of their town.

Mr & Mrs Blair – Cian Barry and April Pearson play our Blair couple. And they just aren’t right in the head. Something is distinctly wrong with this couple. Like, fundamentally. So much so, I almost didn’t buy into the concept that Julie would have invited them in at all. But then I remembered how hungry Julie and Andrew were to get the story of what is going on up on the moors, and the one clear thing Mr. Blair communicated was that he wanted to talk to them about the what was happening up there. Both wearing all white. Both initially mistaken as religious cult members. But no, they aren’t cult members, what they are is either thoroughly insane, or extra terrestrials. Not much else really could potentially be true about these two. 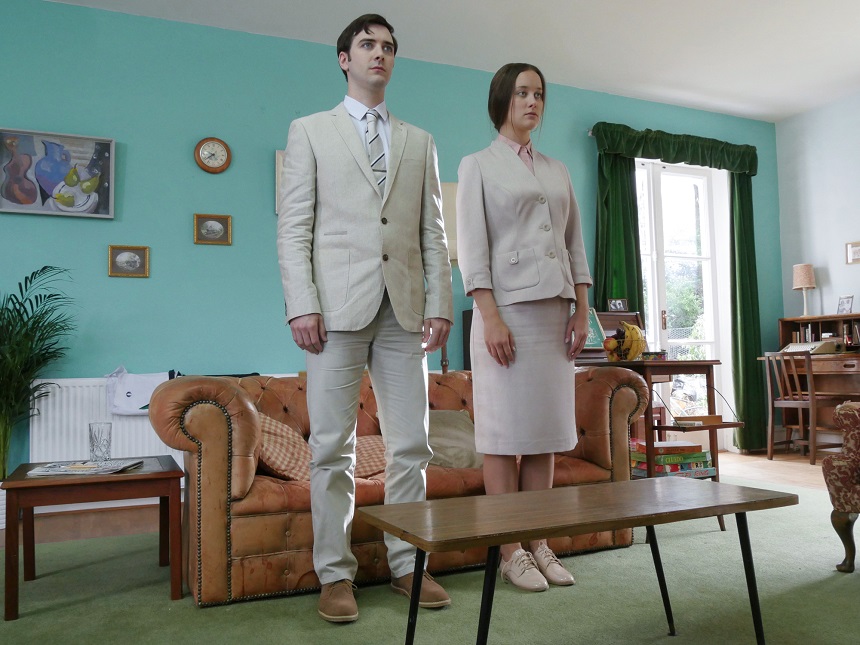 The What of Caught

After the opening pleasantries of Caught, we very quickly begin escalating when Mr. and Mrs. Blair arrive. The situation goes from a pleasant, if awkward conversation, to a hostage situation in about 3 seconds flat. And the rest of the movie is Mrs. Blair alternately drooling on Julie & Andrew (Julie Andrews?!?!) or shrieking at them. So, instead of a story interview with the Blair’s, now J&A are potentially fearing for their lives. But they don’t understand why. What is it that the Screeching lady about? Why is Mr. Blair speaking in lurching half sentences? And what do they want?

In the longest of the short conversations that occur we learn early on the Mr K is a big deal to Mr. and Mrs. Blair. But who is this Mr. K? And why is he so important to them? And better yet? Why do they soon after say that the Blairs are Mr. K?  More importantly, why do they think that babies have off switches? Why would they believe they are machines? Then, it becomes clear that they are awaiting Toby, Julie and Andrew’s second child. The baby being the first.

And as Andrew and Julie wait for their son’s return from school, they have been stashed in Andrew’s dark room. They begin to understand that when they had begun looking into what had been happening on the moors, that they had apparently “Caught” something inadvertently. And literally, this is the central, nay, ONLY, question that entires the mind of this movie. WHAT DID THEY CAUGHT? Well, that is basically the entirety of what we’ll talk about after we finish with the what.

As the movie escalates to its conclusion, and Toby arrives home, things go from bad to worse. And ultimately Andrew breaks a picture frame to get a shard of glass to attack Mr. Blair with. But ultimately, gets him killed. And similarly, Julie is then killed by Mrs. Blair, despite her decomposing face. And in the last seconds the tell Toby to run for it with the baby. But in the last seconds of the film, we see a flash of shadow behind Toby, and then all black.

Now WHAT THE HECK is Caught?

We’ve got some data that tells us that Mr. and Mrs. Blair are not “Mr. and Mrs. Blair”. Some. Like for example, the comments about K. And eventually that they are K. We are K. Like for example that they seem to be excreting or melting, from the inside out. That they started to melt. Eyes. Faces. Something was wrong. Something is different about this Mr. and Mrs. Blair. Now, an argument could be made that they could be sick foreigners? Stilted accents. Strange fashion choices. They could be foreigners. And yet, their actions went well beyond human. They seemed to be failing to understand what it meant to be a human. “Turn the baby off.” Etc. These lines seemed to indicate more of alien life than anything else. And I’d even go so far as to say that they are part of an alien expeditionary force. Maybe that was immediately obvious to you. But it sure as heck wasn’t obvious to me.

Even the most clueless of viewer noticed that the thing that was caught was a photograph. But we are intentionally, never shown the photograph. We watch as Andrew and Julie stare at the photo, and we know that whatever it was, was shocking. Andrew places it face down in front of Mr. Blair… and so we can’t even zoom in on the frame to snag a glimpse at what it might be.

The problem that I have with even guessing at what was Caught in that frame, was simple enough in that when Andrew originally took the photo, he didn’t notice whatever it was that was happening on the moor. Could be that they didn’t have the necessary background to put two and two together. Or, it could be that whatever it was happened too fast for him to notice in real time. But I can’t think that it would be anything other than an indication of this expeditionary force that was landing there on the moor. Or the activity of this alien force overcoming or attacking the military that had begun to amass in that area. I personally think that the entirety of this encounter comes from the fact that these aliens, this K, this movement, is trying to control the flow of information about their purposes or their goals. If they are here and are speading, and Andrew has a photo, they want that photo stopped for a reason. The totality of this movie is solely about control of the news and the information of what is happening.

I don’t know, what do you think that was captured in the photo?

Final Thoughts on the movie Caught

Caught wasn’t perfect. Caught didn’t give us a whole lot to go on. You need to like less, than more, in order to really dig this movie. And although I do… there was so LITTLE here, it almost became a little frustrating. And yet… this could be how an alien expeditionary force would really begin. By trying to wiggle their way into the culture in order to control the flow of information about what it is that they are doing… we know something about them. We know they aren’t for us. We know that they’ll do anything to keep the world from knowing, (after all, everyone does die in the end. right?) and so we know that this is a very violent thing.

I think I really really liked Caught? I think? And yet, I don’t know if everyone of you will. I thought April Pearson, Mrs. Blair, while not saying a word, just pwned this roll. She seriously scared me to death. hahaha. She was fantastic. The dialogue seemed to be more about holding off what it is that we might learn, than giving out any information. But over all, yeah, I thought it was a fun little film. You?