Single Best Cinematographic Episode of Television of All Time

Single Best Cinematographic Episode of Television of All Time

I have said this before. I’m really not enormously into television. But over the past year or two, as television has become infinitely more cinematic, I have taken a liking to the format all the more. I’ve spent a lot of time discussing television shows like Westworld, and Handmaiden’s Tale, oh, and Dark, holy crap, you can’t forget Dark! Oh my gosh, and TABOO! So yeah, I’ve started diving into TV a bit more (Oh, and can I take a moment to mention that this Sunday starts Westworld Season 2? I’m sure I’ll be furiously trying to churn posts out about it as they are released. We’ll see.)

Well, a week or two ago, a buddy o’ mine, and I started watching a couple shows together. We started with Peaky Blinders. Wow. Talk about a mind rearranger. So much good dark sinewy molasses right there my friends. And then we jumped over to Mr. Robot. Which, for the record Jake, I told you about first, not the other way around, alright? Gah. Some people. Anyway I’d watched season one, and he’d seen up through season 2, so he caught me up on season 2, and then we forged ahead into season 3 together. I want to say a few things to those of you that have already watched the show… So I’ll type in WHITE. In order to read it, you’ll need to highlight it with your mouse. Wonder how this is going to work on mobile phones. Who cares, figure it out people. The text is there, I promise.

So I have to say, that Mr. Robot has been a truly ground breaking show from a psychotic split stand point. That we have two different characters playing a single role, and that they are at war with each other is a level of brilliance I have never seen before. The plot direction seems a bit crazy, and a bit downward spiraly, but, the character development in Elliot? And the mind job of an entire season 2 being in the prison? Pretty cool… and pretty crazy.

Nothing could have prepared me for one particular episode. Just this Friday Jake and I watched Season 3, Episode 5. In a non-spoilery way, the episode is almost entirely inside and around Evil Corp. And I think 44 minutes of the episode is shown in one long continuous take, similar to how Birdman was done. You know, the movie that won best movie in 2015? That film was done with a synthetic single take. They actually filmed long cuts, interspersed with CG’d out cuts… in effect gluing the entire movie into one single view and vantage. Which was very similar to one of my personal favorite movies of all time, Victoria. Which was actually done in one single take. I got so jazzed about Victoria I went and found the cinematographer, Sturla Brandth Grøvlen and interviewed him. 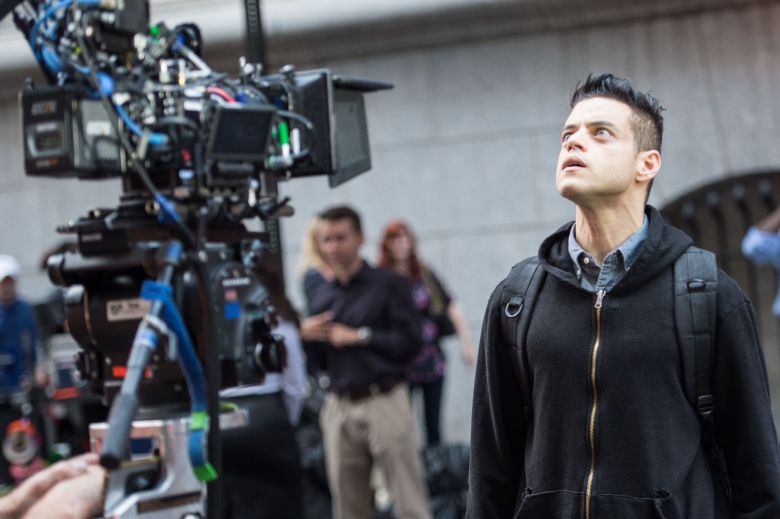 Apparently the filming for episode 5 started before anything else in the entire season. And although it seems like its a single take, it took them months to finish up the shoot. But the idea came in that the episode was supposed to be in the style of 24, one continuous real time episode. And as that evolved, it eventually took the shape of a single shot. Director of Photography Tod Campbell has said that it was unnervingly hard to pull off. The filming required a dance like precision, one extra out of place? Heck, they slid walls out of place and back again mid-shot. And as the riot, initiated by F_Society, escalated and scaled the Evil Corp building, the characters moved from floor to floor to dodge and evade capture or harm. But truth be told? All the filming occurred on a single floor with each new floor requiring a wipe and restart of the entire office setup.

According to Campbell, just the very first shot of the episode, was comprised of 24 takes and took about 8 or 9 hours to capture. The shot comprised of Eliot coming to in the elevator, and then make his way into his cube. Simple? Not even. I think that 8 or 9 hours of shooting gave them the first four minutes of the show by my math. That is crazy making right there.

Now, I have to say, I know HBO has doubled down on Westworld, and on Game of Thrones, throwing tons of money at those production efforts. But I’m going out on a limb here and saying that there isn’t a better single episode, in all of television history. Seeing as though I generally don’t watch TV I could be all wet. So I’d love to hear from you if you have a better shot episode in mind.

I don’t think I’ve ever said this before, but, even if you don’t plan to ever watch Mr. Robot, ever. Hackers and cyberwarfare and insanity isn’t your dish. Ok. But find a copy of S03E05 and watch it. The episode is formally titled Eps3.4runtime-error.r00 – and you can find it right here and here to watch if you’d like assistance on this front. (&yes, you are welcome.)

Yes, this isn’t my normal sort of post. But this episode needs all the credit it can muster. And I think it might mean Emmy’s and all numbers of awards at the end of the season. Kudos to the Mr. Robot team. You out did yourselves!