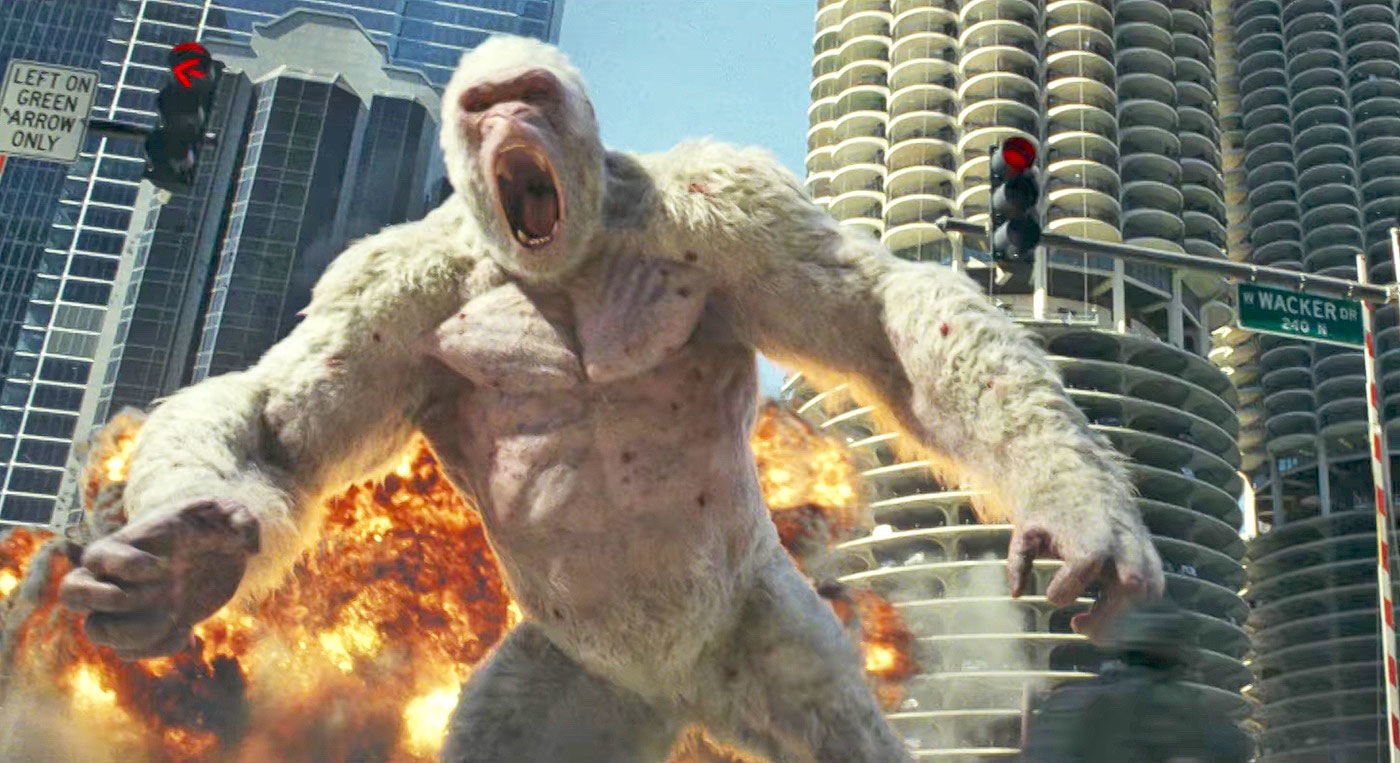 I Will Now Seriously Explain The Elements of Rampage That Worked

I Will Now Seriously Explain The Elements of Rampage That Worked

Yesterday, I was bet by my Australian buddy (which, he adores being called… and so I do… EH!? THROW ANOTHER SHRIMP ON THE BARBIE!) to do a post entitled, and I quote, ‘”The Millennial Matisse” – an exposition as to the social, cultural, and artistic impact of cinematic savant Dwayne “The Rock” Johnson’. And so I did. But I figured, if I was going to do such an in depth tell all investigation into the man, the myth, the legend, then I probably needed to have seen his latest film, Rampage even though this isn’t really my sort of a thing.

But as I was watching, tumbler after tumbler spun and spun around in my brain, and eventually as the formula for the standard summer blockbuster fell into place all the tumblers dropped into alignment and the lock opened. And I figured, heck, let’s talk about Rampage, and the meta-discussion around the age old summer blockbuster of yore and what makes it work and what makes it fail as it relates to the movie Rampage.

As a general precaution, I am planning to dive into Rampage a bit, but only in order to identify the detailed threads necessary to make a summer blockbuster movie.

Rampage (and all blockbusters) Setup

Hey, why don’t we get into the tropes and the leitmotifs necessary to make a summer blockbuster launch as we go through the Rampage. But let’s talk through the independent threads of the what that happened throughout this film so that we can call out the pattern later.

The movie opens in space. Experiments are happening. And Evil Corp. (sorry, currently mid-season 3 with Mr. Robot, which I highly recommend, even though I’ve never talked about it here I don’t believe), I mean Energyne is attempting to create some evil, malignant genetic mutational tool in order to weaponize animals for some dark and opaque purpose. Obviously, that goes wrong, and the samples hit earth and infect several different animals.

All summer blockbuster movies have decidedly simple overviews and setups. IN A WORLD, where petroleum has dried up and the earth’s mantle is cracking from the inside out!!! IN A WORLD, where dinosaurs roam the planet looking for people-sized hors d’oeuvres!!! IN A WORLD, where an average man is pushed against the wall with his children threatened by international bagel terrorists… IN A WORLD, where antibiotics have failed and the populous fear simple paper cuts!!! IN A WORLD, that the president has been kidnapped by christian terrorists, and the kidnappers have the nuclear football intent on a bringing about the 2nd coming of Christ…  (sorry, that last one made me laugh it’s so good. hahaha.) But you get the idea, I could churn these throw away ideas out all day.

Enter The Rock. Davis is an ex-military guy that has now taken to protecting and working with animals, and fighting against poaching. It is one of his animals that gets hit by the science accident. An albino ape, named George, that has learned sign language. And it must be said that Davis and George are our humor relief throughout the entire proceedings. Enter the love interest, Dr. Kate Caldwell, who worked at Energyne, but only for good purposes, in the hopes of saving her sick brother. But Energyne utilized every scientific discovery she made and “weaponized them”.

All summer blockbuster heroes have an everyman quality to them. Tom Cruise being a notable exception to the rule. Better everyman would be Bruce Willis. Today’s Bruce Willis might be Chris Pratt maybe?

Discussion of the Method, the Science, the Cause

We, as a culture, are apparently very afraid of science and technology. Because, we are seeing a literal deluge of science experiments going wrong throughout the cinema world over the last 20/30 years. Movies like Jurassic Park and the like, where the hubris of man is convinced that he can chain science to his will, only to learn that he is delusional. Obviously science doesn’t need to be the method. You can also go with alien, geologic, or terrorist interests to push the narrative forward. And in Rampage, it is very specifically a fear of CRISPR, the gene editing software that can slice and glue back together again our DNA. Or something like that. And yes, this is a legitimate fear. Kinda freaky to think of what human kind is now capable of in some guy’s basement. So CRISPR is literally our method, our prime mover that caused this evil to begin.

You do realize, that by the end of this discussion you will have a plug and play summer blockbuster generator. Right? I kid you not. This is going to happen. Just keep reading. Which brings us to our arch villain.

In Rampage, our nemesises? nemesii? are Claire and Brett Wyden. They are the corporate executives that run Energyne, the company that basically poisoned the planet with their CRISPR capabilities. At first, when the movie started, I couldn’t think of why the screenplay went with a female Cruella D’Ville type for their bad guy. Heck, I’m open to casting anyone and everyone. But I just didn’t connect the dots. That was until, at the very end, Claire Wyden put on the red dress and headed out. And if you know the game, like at all, you know how her fate ends up now.

But the character traits of a summer blockbuster Nemesis are laughably thin. Here are a few laughable examples:

Belloq – Raiders of the Lost Ark – a French archaeologist and rival of Jones, that works for Nazi Germany

You get the idea. It’s almost like they have zero past, and zero future. They have one job and that is to foil against the protagonist and nothing more. And really any exposition about the arch nemesis is highly frowned upon within the summer blockbuster genre.

This is one of the trickiest bits of the summer blockbuster movie definition. The problem definition and resolution has to be so seemlessly and perfectly integrated with zero loose ends, and zero questions outstanding. The one notable exception to this rule is the entire Pirates of the Caribbean franchise. But generally speaking, You have one problem defined, and our heroes are the only two people on the planet that can solve this problem. We have Davis, who is friends with George – one of the turned animals. And we have Kate Caldwell, that has detailed knowledge of Energyne systems and protocols. Oh, and these two people might also be romantically involved… because of course.

So what is the problem that Davis and Kate need to solve? The killer animals are being attracted to Chicago by a bat sonar thingy (?) and our two heroes need to immunize them before the city is destroyed. Well, to do that, Davis and Kate will have to break into the offices and find the drugs necessary. Well, that gets complicated by… oh, I’m sorry, I got bored with what I was saying. Destruction, bad stuff, FBI agents, and the Wydens.

The Real Point of Summer Blockbusters

Literally, the only point of summer blockbusters is to gin up a reason to destroy cities, lay waste to whole states worth of infrastructure and what not. Fireballs and enormous cataclysms sell tickets. And the hero is just a thin reason for us to care about the solution of the chaos. (Just once I would love to see a movie set in the wake of one of these events. People trying to rebuild. People with lost loved ones. Angst and anger at the “super heroes” that caused this problem in the first place. Which is why Steelheart by Brandan Sanderson was such a great idea. If you give one person infinite power, it will corrupt absolutely. Right? So this benevolent Superman idea is pure fiction. But in Steelheart we see that Superman (or his equivalent) actually does become evil with his unstoppable power.) So while it would have been good for Chicago if Davis could have stopped the animals before they got there, it wouldn’t have been good for ticket sales.

Let’s Talk About Why Rampage Worked

Yeah, so, why exactly did Rampage work? The answer is simple really. It was mindless, thoughtless, chaos. But more importantly? It was funny. The relationship between George and Davis was funny. Heck, The Rock was funny. “Oh, of course the wolf flies.” This movie was a low thought puree of chaos, city destruction, and humor. In my head I see this picture of Hollywood putting a bib on their viewers and just serving up spoonful after spoonful of baby food. And we, the audience, apparently love that kind of relationship with our entertainment. Because as of this particular moment the movie has made over 180 million against a budget of 125. I actually expect a Rampage 2 announcement within the week. I’m serious here. There is no way Hollywood isn’t sequeling this movie. And I 100% guarantee The Rock will be given anything he wants to sign on for it.

Is the Movie Any Good?

Oh no. It’s horrible. But I was literally shocked how much I enjoyed that baby food, that smooth smooth baby puree that was dolloped down my gullet by the gelatinous gallon full. (Oh my good lord that sentence was truly glorious if I do say so myself.) How much I enjoyed seeing the pieces of this movie seamlessly and perfectly slide into place. No loose threads. No questions. Just unadulterated plot jigsaw puzzle perfection. And it was inane to the point of hilarity. Animals infected by manmade drugs in space become city killing horrors? That plot is so bad it might make a good 80’s Arcade game. Oh, wait. But the movie knew that. And when Claire Wyden put on that red dress I knew she was going to be eaten… because in the arcade game? Its the girl in the red dress that is repeatedly eaten over and over again. And with that I literally laughed out loud.

But I absolutely found this movie fascinating in that it was the most obvious formula movie I’ve ever seen. And the formula was so blatantly obvious that I considered creating a Summer Block Buster Movie Plot Generator to assist me in my desire to become a Hollywood screenplay author. And the columns of interconnected values would be what we talked about here already:

here’s another go at a random movie generated idea:

Come on. That is both funny and good. We should create that movie to make fun of Summer Blockbusters.

But the reason summer, thoughtless movies are easy to sell is because messy movies are hard to understand. Require the viewer to think. Movies that leave threads unexplained and left for the audience to grapple with are difficult to get. Which is probably why Christopher Nolan is my favorite director because he gives the audience a clean ending, if you don’t think about it much. But upon further inspection you realize that our first assumptions my actually be incorrect. Its the same premise and idea that makes beach books totally different than winter books. Summer break books area easy to digest and have very little that is complicated or hard to understand in them.

That is an honest question because right now? I have zero clue. I watched Rampage, I laughed along with Rampage, I was confused why I enjoyed it as much as I did. But I was mainly interested in the meta-conversation surrounding the blockbuster itself, and why it seems to work. And so I guess I wrote this to talk to myself about this phenomenon. If you found it interesting, I’d love to hear more in the comments below.