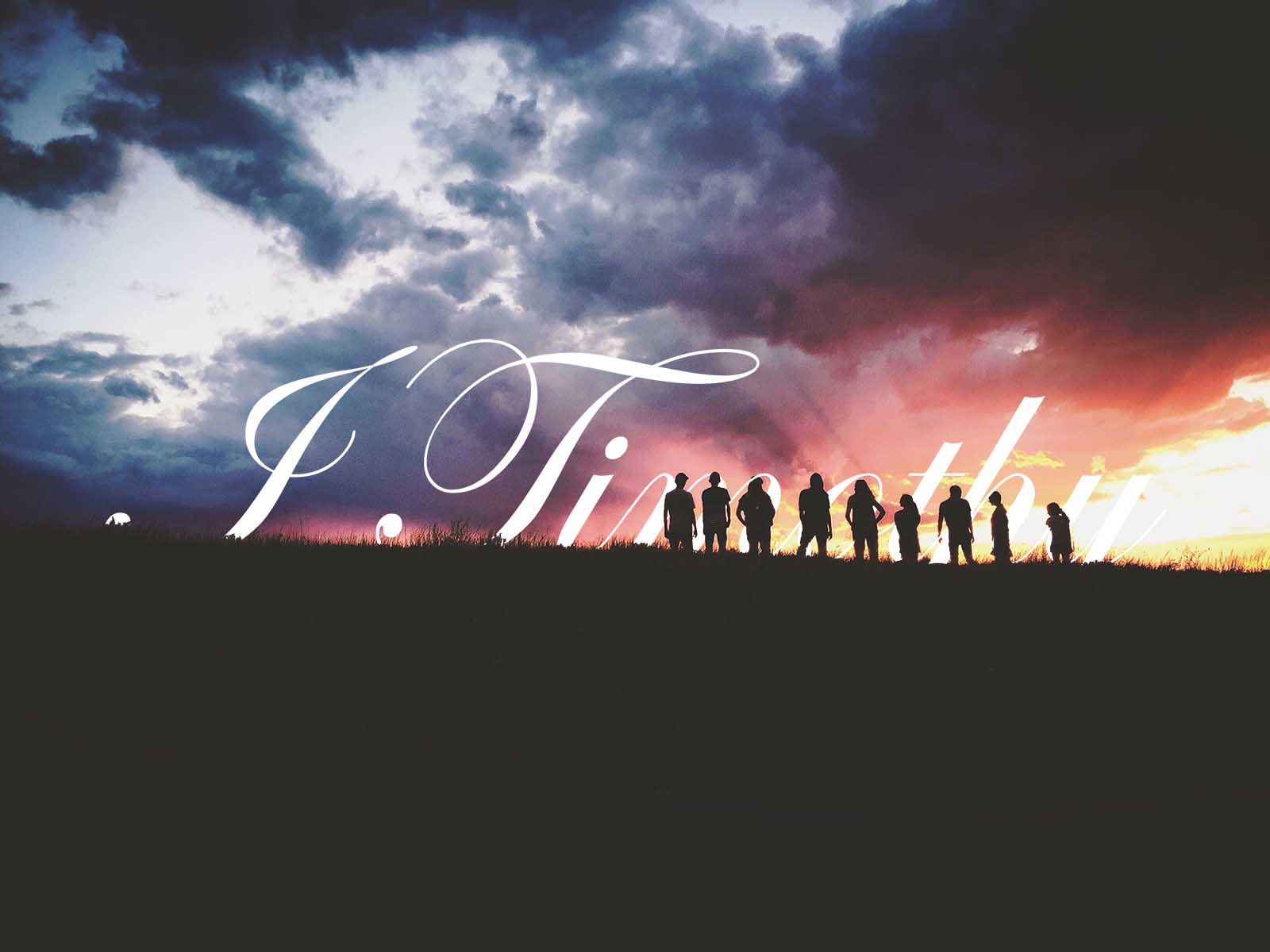 This Bible experiment thing? Man has it just been the best kick in the head ever. (I hear you saying though, ‘But you run a movie site thing? And talk about crazy movies that aren’t very Bible-like? And you are into this God thing? What the heck is that about? Well, I am crazy about God, and a few years ago I decided I was going to go book by book, through the Bible. And for each book, I decided I was going to talk about it, and the confusing bits, and the bits I loved, the bits I hated. Just talk about it. And really? I started this back when no one came to this site. So it really was just for me. But now that people are actually coming, people have said, uh, it makes no sense. And I laugh and I say, fair, but I’m about diving deeply into anything and everything that I experience. And the Bible is one of the things that matters to me… so I’m going to dive deeply into it. With or without anyone else joining in.

So alright… where are we? Oh right… We are in I Timothy. And for the past pile of posts its been all about Paul and his letters to his church friends. And I have to tell you this story. Someone (Zeph) commented just recently over on my Philippians post and they said this, and it was one of my favorite comments I’ve ever received. And this site has nothing if not a LOT of comments on it. But check it out:

“There are those who say that Saul never stopped persecuting Christians, he just learned that you can do far more lasting damage from the inside (the attitudes he injected into nascent Christianity, which some feel has caused much difficulty for the last couple of millennia).”

So much goodness in that comment. Right? I think there are so many things being said here in this comment that are under the surface. Just the most deep rooted fears, and the deepest reaching anguish of… this can’t be possible. There is no way that this Christian thing could possibly be legit. So much so that we are going to put forward a theory that Paul subverted the message of Christ in order to weaken the church from the inside out. Right? So much hate of what might just be possible. No? Do you not see all that there. And Zeph, I have zero antagonism for you or for the question. I dig it more than you could ever know. But that is just because there is so much to this question and so much to this thought structure. I actually responded in that thread and had a lot of fun responding to it over there.

My question to you at this point, before we even start? Is this. I believe that the God of the universe is relentlessly chasing you down. He has arrayed the universe with pointers to him through the magnificence of the mountains, the splendor of the waterfalls, the majesty of the cosmos… Look at the face of a loved one. A husband. A child. A mother. A wife. And marvel at the intricacy of the beauty of their features. You realize, don’t you, that artists since the beginning of time have celebrated the wonder of God’s artistry by painting, sculpting, sketching, the wonders of God? What unique thing has any artist ever painted? What completely new thing has any artist ever crafted? Nothing! When we celebrate an artist and her skills? We are celebrating their ability to capture the brilliance of God. No? Yes. This is truth.

Yeah, I lost the thread there somewhere. Oh right. God is relentlessly chasing you down. He’s doing it in ways that don’t even register on your radar. But He is. I promise you. And I am as sure of this as I am sure of the words on this page. I have zero doubt about this truth. God is chasing you down. And everything that makes you doubt this truth is leading you away from your original purpose on this planet. Right? Movies, newspapers, books, television, board games, drugs, video games, automobiles, scrap booking, papier freaking mâché. WHATEVER… all of it could be standing in the way of you and your original purpose on this planet, which is… walking with the God that knitted you in your mother’s womb. And these conspiracy theories that say that Paul was there to subvert the church? Is actively tearing down this truth because there is an equally opposite conviction inside of us saying that we want to be our own gods. We want to be the perfect master of our own domain. And relinquishing this control is tantamount to our own deaths. No. We were made to walk closely with the God that crafted us… and we are fearfully and wonderfully made. You, my friend, are not an accident. You have been fearfully and wonderfully made… and you were made for a purpose. You were made for a purpose.

Does that sentence not ring like a clarion in your soul?

Overview of I Timothy

We are coming into the last few letters from Paul. The only Pauline (love saying Pauline, makes me sound theologically impressive) letters left, are II Timothy and Titus. And that’s when I stop talking about Paul. But I love Paul. He HATED Christians. Killed them. And then he hit the brick wall and encountered God. And everything in his life changed after that. (I talked about his life in depth in one of these posts, can’t remember which one. Maybe it was in Philippians?) And then from then on, his life was all about his sharing this amazing thing that he had encountered. And letters to his friends in the churches he had founded, or that he was desperate to visit.

I Timothy is a letter from Paul to Timothy sharing practical advice from Paul to a young church leader named Timothy there in Ephesus. (We covered Paul’s letters to the Ephesians already, here… so I guess Timothy could have been II Ephesians and III Ephesians?!? haha. I digress.) And it is interesting to note that Paul and Timothy had first crossed paths around 10 years prior. They were in the city of Lystra, which, I believe was somewhere in Asia Minor. And it was after meeting Timothy that Paul invited the chap to join him on his second missionary journey.

It was later, after Paul’s establishment of Timothy as the leader of the Ephesian church, that Paul is writing back to Timothy to give him advice on all things that would matter to the young ecclesial pastor. So, for us, the letter is all things church-related and so not enormous interest to us as random individuals. But there are a couple of verses in chapter one I want to talk about in a little more depth that does relate to all of us. All throw the first two to you here, and the third in a minute…

“It is a trustworthy statement, deserving full acceptance, that Christ Jesus came into the world to save sinners, among whom I am foremost of all.Yet for this reason I found mercy, so that in me as the foremost, Jesus Christ might demonstrate His perfect patience as an example for those who would believe in Him for eternal life.“

RIGHT?! No? That didn’t do anything for you? Gah. You guys are so much trouble. hahaha. Alright, I’ll unpack the bits here that are amazing to me.

In this quick verse or two Paul explains what it is that it means to be a Christian. Jesus Christ came to save sinners. Done. This is what it is all about. That is the message of the gospel in total. All of it. Christ came for me. Christ came for you. And then Paul drops a little truth here. Christ came for sinners…. and I am the biggest sinner of them all. Paul is saying here that of all the people that are in desperate need of salvation, Paul is so aware of his need, he knows that he is more sinful than all of us. Why? Is it because he was a sinner? Yes, he was a murderer after all. But he was also aware of his sinfulness. He was aware of the desperate gap between himself, his sinfulness, and God’s utter perfection. This, my friends a Yoda-level christianity move right here. The more we fall in love with God and his grace that forgives us of our sins, and for the amazing intervention in our lives the more we are upset about our sinfulness that is juxtaposed with that perfect goodness.

Then he says, that God’s intervention in his life, God’s patience for his tragic life, should tell the story of God’s amazingness more than anything else. Paul attacked the church so much that the early church leaders knew him by name and were afraid of him. Heck, they should have been afraid of him. Look for yourself, Acts and other locations in the gospels documents Paul’s tyrannical rule over the early church.  Heck, it’d be like Sam Harris, the vaunted atheist converting to Christianity. Everyone would wonder what Harris’ ulterior motive was. Theories would circle the globe that he was attempting to subverting the church from the inside out… like we talked about at the top of this post. It really should leave an impression, even on us today. This was a dramatic conversion story.

And now to the final bit of this passage I wanted to talk about, the proceeding verse:

“Now to the King eternal, immortal, invisible, the only God, be honor and glory forever and ever. Amen.”

Which brings us back to the beginning. God is chasing you down. The entire universe declares his glory. And you are actively running from Him if you don’t believe. There is no shame in that. I am not trying to belittle you. Just trying to tell you the truth. I would want someone to tell me the truth if the roles were reversed. Timothy is a book that tells the story of Paul and Timothy’s relationship and Paul’s desire to bring him up in the truth of the gospel and grow him as a young pastor. God wants to grow you as a young follower and walk closely with you as well.

I’m going to shut this down because it’s time to board my flight. But I want you to know that God loves you. God is pursuing and loves you so much that he will allow you to choose for yourself. But the only real choice is to live a life for the only wise God. The King Immortal. The one who deserves glory and honor forever and ever.