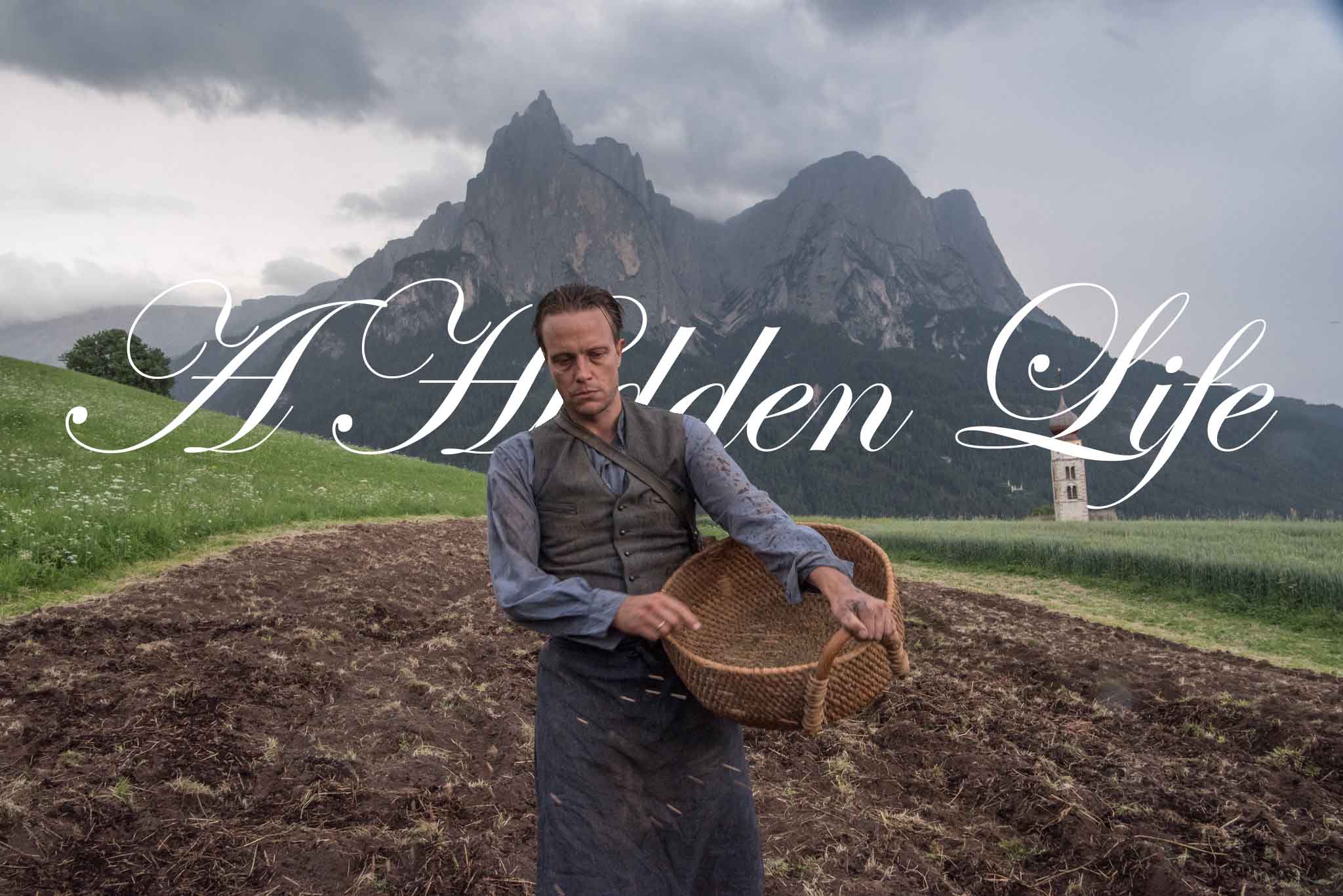 Taylor Holmes
cinema
March 13, 2020
A Hidden Life Movie Recommendation and Explanation, or how, if you are hoping to be convicted of your moral inferiority then A Hidden Life is for you.
Screenplay
Historicity
Cinematography
Acting
Reader Rating1 Vote
4.7

You guys are flipping whip smart. How do I know? Well, for one thing, you are staring at this page right here – which means you are curious. You like digging into things deeper than the average bear. And you have really good taste in movies. (Cough.) So, it makes sense that you’d be interested in my latest obsession, A Hidden Life. Why? Well, that is a really good question random internet denizen. Because this movie has more layers than your average onion, and more mind-breaking insights than a doctoral level class on Theological Ethics. It has a very similar complicated landscape to Ethan Hawke’s film First Reformed. The obvious things are actually infinitely more complicated than you first realize, and the complicated things require a nap and some aspirin. So, yeah, A Hidden Life Movie Recommendation and Explanation…

For those of us who haven’t seen A Hidden Life yet, what is it about? The film is based on the real life events of Franz Jägerstätter, an Austrian who refused to fight for the Nazis in World War II. He slowly, and profoundly, considers the moral dilemma in front of him. And then, when he decides that it is wrong to join the fight of the Germans, he is threatened by the community, the Church, and then the authorities. And ultimately, when he is confronted with execution for his beliefs, he has to decide ultimately what the right thing to do is.

99% of A Hidden Life walks between the frames of this movie. Most of the message of this movie is hidden in the grandeur of the Austrian mountains, the fear of Franz’s fellow Austrians, and in the wrinkles on his wife’s face. But let’s see if we can take a crack at the hidden mysterious of this movie, shall we?

Franz Jägerstätter (played by August Diehl), an Austrian peasant farmer, who has lived his entire life in the village of St. Radegund. Everything stops being normal when war breaks out and Germany begins marching its way across Europe. The couple, Fani (played by Valerie Pachner) and Franz, are integrally knitted into the community here. The soil, the cows, their family, the mailman, the mayor, are all intricately intertwined into their lives. When Franz is called up to basic training he leaves his family for a few months while he trains. But when France surrenders, he is sent back home thinking that the war is over. Soon after though, the men are being conscripted and Franz has a hard choice to make.

Hold on a second…Oh, I’m sorry. Uhm, did I mention who the creator of this film was? My apologies! Does the name Terrence Malick ring any bells for you? Maybe Knight of Cups rings a bell? To the Wonder? Or maybe The Tree of Life? Malick has a pace about him that basically says to the viewing audience, “I’ll get there when I good and ready, dammit.” And if you aren’t careful, you might miss literally everything he has to say in your impatience to get there. So why am I mentioning this now? Well, because the film is like an Austrian Farmer special, filmed by the National Geographic. Malick’s shots, the mountains, the countryside, are some of the most gorgeous film-making you’ll ever see. And so that the fact that nature, the clouds, the sun, the rain, are all telling the story of the internal struggle of these characters, won’t surprise you.

When the men of the town are called up, Franz, and the other future fighters for the Reich are called to swear an oath of allegiance to Adolf. But Franz isn’t having it, even though all the town leans in to force him to do it. (It’s as if Franz’s recalcitrance is a blight on the allegiance of the entire town, and all its people. The closest I can imagine this in my own life is my street’s hardcore competitive Christmas decorative efforts. God forbid there being one hold out. I’ve seen the street’s neighbors collectively walk up to the new street inhabitant and offer to do the decorating for them. “Would you like to borrow my ladder?” “How about these ‘extra’ lights I have?” “These inflatables were last year’s model, be happy to place them around the yard for you…” This, but with Nazis. I think. Yeah, it would be a horrible position to find yourself in.

Early on in this dilemma, Franz figures he’d find support and moral guidance from the Church. And so, Franz asks for a meeting with the Bishop of the area. Franz paints his case fairly clearly, “If God gave us freewill, then we are responsible for what we do, or do not do. If our leaders are evil, what does one do? I want to save my life, but not through lies.” And what does the Bishop say in response? “Let every man be subject to the powers placed over them.” Which is from Romans 13:1. This is true. We are to be subject to those in authority over over them. Fair. But I’m confident this Biblical mandate has literally NOTHING to do with aiding and abetting the spread of the Third Reich around the world. Franz is 100% on the right side of history, AND the Church in Germany, by and large, missed this one. (There were others, but not many. On a side note, can I recommend the book Bonhoeffer by Metaxas?)

This is the crux of the problem though. What does one do when we are convinced of our convictions and the entire world is on the other side of history? Looking backwards on history it’s easy to say what we would do. Slavery in the south? Obviously support our enchained brethren. But in the midst of these moments, when everyone is blindly following everyone else, and people are dying as a result, standing up is a lot more difficult. After meeting with the Bishop, Franz says, “Christ’s life is a demand. You don’t want to be reminded of it. So we don’t have to see what happens to the truth. A darker time is coming…when men will be more clever. They won’t fight the truth. They’ll just ignore it.”

I’ve made this “quick” review into a long one, yet again. ANYWAY, eventually Jägerstätter is sent off to prison. And throughout, Fani and Franz exchange letters, and encourage one another. While their solidarity strengthens them, the town continues to attempt to tear them both down.

Franz is taken first to Enns, and then on to Berlin, where he is awaiting trial. Eventually, Fani is able to visit Franz in Berlin. And after awaiting his fate while incarcerated in horrific conditions, he is eventually found guilty. The sentence? Death, of course. Franz has continually waived numerous opportunities to sign an oath of allegiance and to do non-combatant work. (Non-combatant work! Morally perfect out! He should have taken it! Wait, you’d sign an oath of fealty to Adolf Hitler? I don’t care if they let me lounge on a pile of bon bons afterwards, I would never sign an allegiance to Hitler. For any reason, or for any out. No no no.)

Then, in August of 1943, continuing to insist on his beliefs, Franz is executed by the Third Reich. And today, we consider anyone who stood up to Hitler a hero. The men and women who attempted to assassinate Hitler, but failed and were executed – heroes. The college students of the resistance in Paris who fought the Germans every chance they got, heroes. (Trust me, you want to read this harrowing book about the women of WWII. Specifically there was one story about Freddie and Truus Oversteegen that blew my mind. They would put their hair in braids to look younger so that when they covered over German propaganda they wouldn’t be suspected. Also, they would occasionally seduce SS men out to the woods, only to shoot them. Or for others kill them from behind. Talk about heroes. Damn.)

A Few Thoughts on A Hidden Life

Where are we silently saying nothing about the truth in our lives today? Are we currently abetting moral injustice and just going along with society? What about Muslims being waterboarded in hidden facilities around the world? (Just saw Adam Driver’s movie, The Report the other day on a plane, and I can’t recommend it enough.) I don’t know, what about with regard to Mexicans family members being separated at the border? Dying in harsh conditions? Are we on the right side of that particular history? The Church seems to be abetting that policy decision as well today. But should they be? Are you? What about just at a micro level. Do you see the people around you that others do not? I don’t know. I’m sure I’ll take flack from Trump supporters for this position – but this isn’t about Trump. It isn’t about Republicans or Democrats. It’s about moral and ethical civility. It’s about whether or not we are listening to the Truth (you know, capital T Truth) and acting as a result?

So yeah, there you have it, A Hidden Life Movie Recommendation and Explanation…