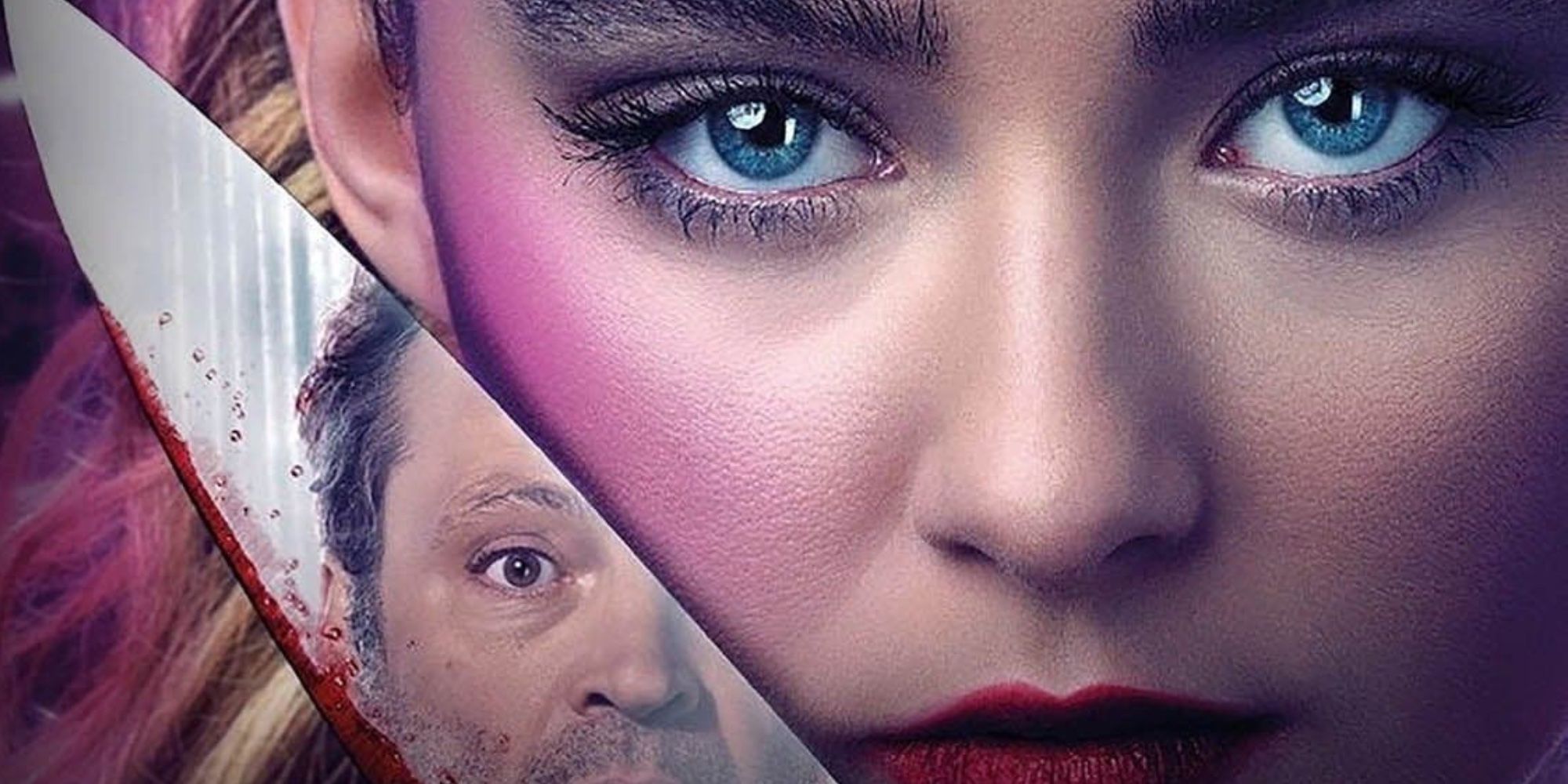 Ending of the Movie Freaky Explained

Taylor Holmes
cinema
November 17, 2020
Freaky is Friday the 13th with something of a heart and a desire to maybe make you laugh along the way.
Action
Acting
Screenplay
Direction
Reader Rating0 Votes
3.2

Right now, Freaky is this movie that everyone is talking about. How gender bending, empowering, upside downingly progressive it is supposed to be. So I had to go and watch it right away. I mean, a crazy violent, but funny, body-switching horror-comedy? Uh, okay. That has my name all over it. But how progressive really is it? And that, my friends, is why we need to talk about the movie Freaky. But also that ending – because it wasn’t the easiest ending to follow. So let’s see if we can put the pieces back together again and make some sense out of it.

If you haven’t seen it yet – let’s determine if it might be your cup of tea. Did you like Heathers? Yes/No. Simple question. If you liked the movie Heathers – you know, the one with Christian Slater and Winona Ryder? – yeah, that one – then you’d probably find this pretty enjoyable. I had a few laughs and enjoyed it well enough. But it was the “progressive” bits that most interested me. But to get there, we need to do a quick walkthrough on the film, and well…this is where you need to leave if you haven’t seen it yet. OK? I’m good to you, you are good to me. It’s currently in the theaters…but it is also hitting digital November 20th as well. So see it. Then come back and we can talk about it.

Like all body-switching movies, Freaky’s switching is predicated upon a McGuffin of some unknown Inca origin. On Wednesday the 11th, four teens, Ginny (Kelly Lamor Wilson), Phil (Magnus Diehl), Sandra (Emily Holder), and Tim (Zack Shires) – are at Ginny’s house while talking about The Blissfield Butcher (played by Vince Vaughn). From context we gather that this Butcher fellow has been killing people since the 70’s. Well, push comes to literal shove, and Tim is murdered with a wine bottle (the wine bottle has no mystical properties, he just dies.) Sandra’s is caught next, and has her head bashed in by a toilet seat. The toilet seat? No mystical properties either. She just dies of her injuries. Phil and Ginny? They are both impaled with various odd items laying about in the room. Mystical items? Nope. They die. And when Ginny’s parents return home they find the kids dead, and more importantly, the La Dola Dagger is missing. Is it mystical? Please. Show some patience. Thank you.

Thursday the 12th – enter Millie (played by Kathryn Newton – who apparently has been in like EVERYTHING, even though I thought I’d never heard of her before: Big Little Lies, Three Billboards Outside Ebbing, Little Women, Halt & Catch Fire (my own personal favorite of the list, just saying. Not that you care or anything. Sheesh.)) and her family. She’s apparently lost her father the year previous, and no one in the family is doing very well with it. Like at all. Well, Millie, after attending a school football game as the team’s mascot, is forgotten at the stadium by her passed out drunk mother. A smidge after midnight, on Friday the 13th, the Butcher arrives. Millie runs, but the Butcher eventually runs her down and pulls out La Dola to stab her. Well, this particular dagger has a back story to it. Something about Incan ritualistic sacrifices…or some other McGuffin tom foolery.

I have got to stop us here for a moment and ask a really important question: “How did this idea get out of the writing room?” I mean seriously. Michael Landon (Family Guy), and Christopher Landon (Happy Death Day) were just sitting there, knowing they were going to do a Freaky Friday/Friday the 13th mashup… but how were they going to pull the mechanics together? “Ok, ok ok ok ok… we need a switch, Mike. Something ingenious. Different. alright?” “Sure, of course. What about a microwave on the fritz? We’ll call the movie MICRORAVE! They’ll be a bunch of little dancers?” “No, I got it! It’ll be a radioactive spill, and two librarians?” “Librarians?” “Yeah, work with me here. The librarians accidentally pickup each other’s books, and BAM! SWITCHEROO! And one goes into the Tale of Two Cities while the other librarian heads into the Silence of the Lambs! Perfect!” “Uh, definitely not. I guess we could just use like, I don’t know, a dagger? Like a sacrificial dagger thing?” “How would it work?” “Well, it was an Incan dagger, and it’s used for sacrificial killings. Of humans. On the top of their pyramids. You know? But whenever a victim was stabbed … YES on Friday the 13th, the victim and the murderer switched places.” “SOLID! THAT IS SOLID! But wouldn’t the sacrifice be, um, stabbed. Um. Like… stabbed dead?” “Yeah. But only when it’s on a Friday the 13th, and when the high priest sort of misses. Right? Not through the heart. But like, through the SHOULDER!” “DANG. I hate it when that happens.” “Then they wake up later that morning, totally switched!” Am I the only person that was in that theater thinking of how flawed the mechanics where on this film? Okay, we’ll set this all aside for a moment, and just chalk it up to the comedy side of the film.

The Plot of Freaky

All body-swap movies have the same plot. Literally the same. Top to bottom. How do we get back to who we were. Along the way, guys that switch to girls grab their new found breasts, and women who are now guys make numerous jokes about penises and the craziness therein. Right? We have all that, but we also have lots of people dying. And this time, it’s Millie (or the form that was Millie) that is doing all the killing. A student in a cryo-freezer. The jerk of a wood-working teacher Mr. Bernardi (played by Alan Ruck – you know him…he was Cameron in Ferris Bueller’s Day Off) getting cut in twain on a table saw. The murders just keep coming, but the murders only predictably being of the jerks in the beginning of the movie. It’s just moral house keeping. It’s fine. And Bernardi totally deserved to be split in half on a table saw because he was really, really, rude to Millie in class. So there.

But what about that idea that Freaky is sort of a progressive, forward thinking film. Instead of a sexist, masochistic, chauvinistic murderer, we have a female teen-aged killer this time. Well, sort of. I guess? Killer Millie dresses with red leather, and uses her looks to get in with the jocks. Okay. And male Millie learns that her strength lies with her convictions and her mind. There was one interesting bit of dialog in the film where Male-Millie is in the changing room of her mom’s department store. This guy (Millie) and her mother have a fairly open dialog about each other from a remove that allows them to say all the things they’ve wanted to say about their husband and dad dying that they haven’t been able to say before. That was fairly clever. But at the end of the day, I mean, this is Freaky Friday mixed with Friday the 13th?!? How progressive can it really be? Could it be possible that all they are talking about is that The FEMALE is our butcher? That’s progressive? You want to talk about progressive, let’s talk about What Keeps You Alive. Now THAT is progressive.

But how does Millie (in the Butcher’s body) get back into her normal form?

Well, the legend has it that the victim and the murderer only have 24 hours to flip back…and that can only be accomplished by one stabbing the other again with the dagger. Well, the first bit of confusion – is the bell going off signaling midnight. It happened before Millie was able to stab the Butcher. Didn’t they miss it? Didn’t they only have 24 hours to reverse the switch?? Well, yeah, but you had to notice one detailed change that was signaled earlier in the film. Josh said that the trick he uses to stay on time is to set his watch five minutes earlier. So when the clock struck midnight, it was actually striking 11:55pm. Got that bit? K. Good.

Now, the second confusing bit was after the switch occurred, Millie is reunited with her family, and all is well. Right? No. While the Butcher is being carted off in the ambulance, his heart rate drops…he dies. Right? Doesn’t he die?!?? Well, no. The Butcher somehow made his heart rate drop on the ambulance’s monitors. And I literally have no idea how. Did he pull the sensor off? I didn’t see him do it. Regardless of how he did it, the ploy allowed him to surprise the two people in the back of the ambulance and then head to Millie’s. And that is where Millie, her mother, and her policewoman sister, finish the Butcher, but this time for good.

Final Thoughts on the movie Freaky

So, here we are. The end of the film. Why did I walk you through all this? Well, I was pretty sure that some of you would watch that ending and wonder what the heck happened. So I figured we could talk through that. But I also realized that there was a heart here that seemed to have something of pulse going for it. A foundation that definitely outstrips a standard Friday the 13th movie. (Well, except for the two with Jamie Lee Curtis…because, duh.) I haven’t actually seen Happy Death Day yet, but from what I’ve read, the sequel actually involves parallel timelines and a fairly tricky setup device, which sort of reminds me of Coherence maybe? But regardless, I’m intrigued.

Anyway, if you enjoyed this – but want to see it done really really well… actually correctly, go watch Christian Slater and Winona Ryder in Heathers. They are actually the same movie, minus the swapping, with much better writing, and real goth emo going for it. Like, in a good way. Trust me on this one.