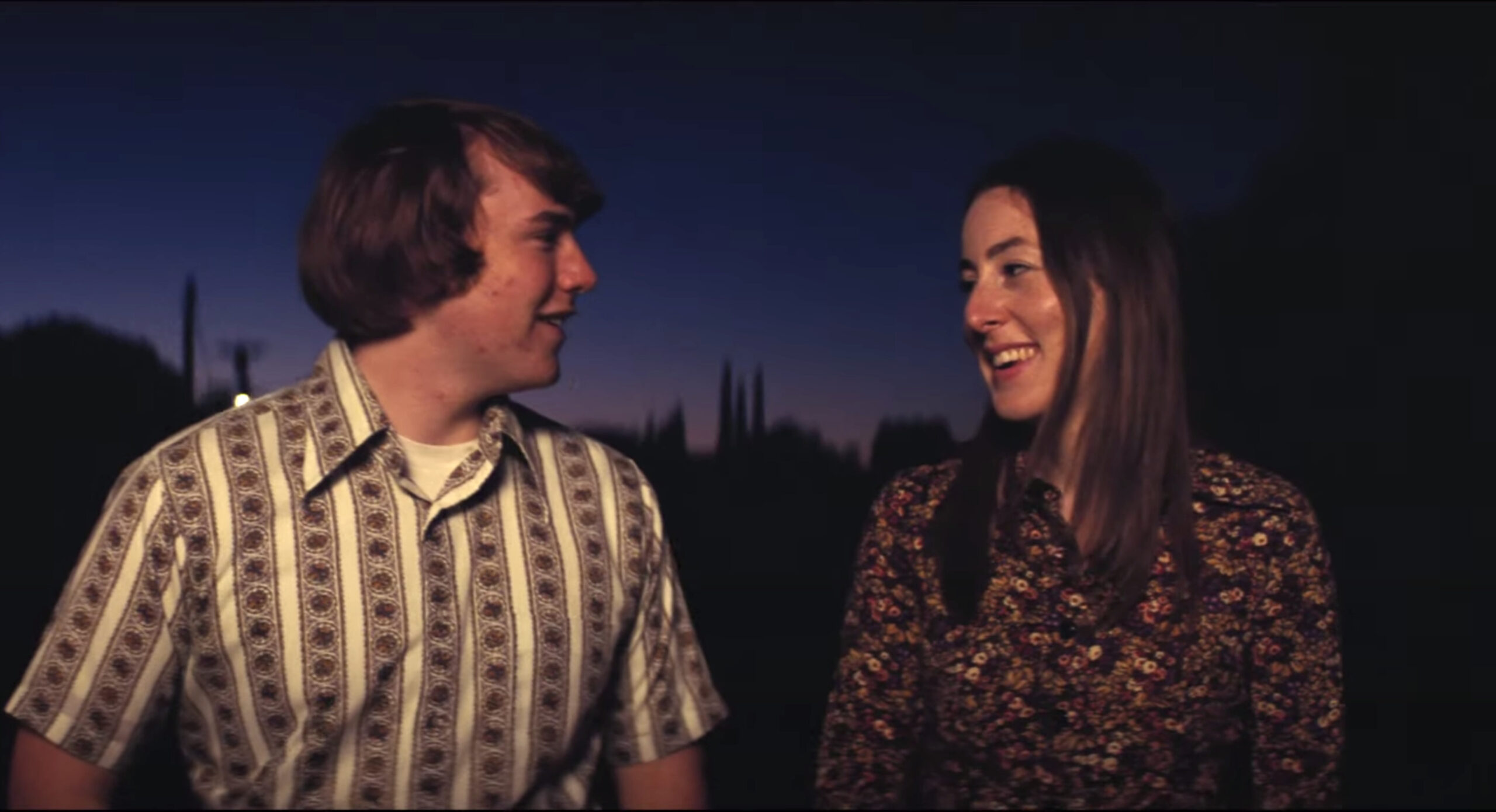 Why Licorice Pizza Is More Than The Sum Of Its Parts

Why Licorice Pizza Is More Than The Sum Of Its Parts… oh, and by the way, it’s also a conversation about being in love all over again. Man, how I loved this movie. Let me count the ways…

Gary Valentine (Cooper Hoffman) is going to get his high school picture taken. Did I mention he’s 15? He sure doesn’t act 15. Alana Kane (Alana Haim) happens to be a photographer’s assistant working at Gary’s high school on the same day. Did I mention she’s 25? No, no I did not. She offers Gary a comb and a mirror to fix his hair, and he asks her out on a date. Their give and take in this opening scene is the stuff of magic. The writing. The rapport. The chemistry. The synergy. I do not know how this alchemical reaction is happening… but I can’t take my eyes off of it. Regardless, she turns him down… but he knows that she’ll come, and she does. And during the dinner, Gary let’s slip that he is an actor and entrepreneur that has a marketing and production company business that he runs. Alana? She buys absolutely none of this – as it is so crazily anachronistic. I mean, the kid still lives at home with his parents for heaven’s sake.

Eventually, needing a chaperone (Come on! how does this kid convince his mother to let his CHAPERONE be Alana? In what universe is this a thing?!? But it works! Brilliantly.), Alana joins him on a trip to New York for a TV Show reunion. (What is this show? I mean, it’s not real, but it’s almost the Brady Bunch… but not. I literally thought it was a show I didn’t know that they were making a fake reunion for that never happened.) Valentine (come on, perfect name for Gary) introduces Alana to one of his co-stars, Lance. Which was bad, because the two start dating. But when it comes out that while Lance was Jewish, he was an atheistic Jew. Worst thing imaginable apparently.

Then, after seeing that the waterbed world was about to go absolutely crazy, Valentine kicks off a waterbed store. Randomly, in the middle of all of this, Valentine is arrested for murder… but was then just un-handcuffed and released, basically, out of the blue. (In my notes, I literally wrote, “WHAT THE HECK!?” but we’ll just leave it as, it is what it is! hahah. This script gets so many free passes from me. Just saying.) Over time, Alana decides she’d really like to try her hand at acting. So Valentine introduces her to his agent and gets her an audition for a part as “Rainbow.” Rainbow would be acting along side Jack Holden (played gloriously by Sean Penn), who takes her out to dinner. Only glitch? Valentine arrives as well with girls in tow… and Valentine and Alana spend most of their time glaring at one another, attempting to show what a good time they are having, not with one another. But it’s during this performative dinner that one of Holden’s old friends, Rex Blau, comes up with the idea to film a motorcycle jump stunt over at the local golf course. Everyone at the restaurant comes out to watch Holden (and Alana, who is on the back of the motorcycle) do the jump. Because I would! As soon as Holden hits the accelerator, Alana falls off the bike, breaking the guitar. Valentine runs to Alana to see if she’s okay, and Holden crashes after landing the jump. With that, Holden and Blau recommence their drinking at the restaurant.

Later on, when the gas crisis has taken hold of the nation, we watch as extraordinarily long lines head to the various gas stations nearby. (And it was like a flashback to see those long lines. They will ever be etched in my memory – we even had cars parked out front of our house as they wrapped the entire block.) Anyway, Valentine and Alana take a waterbed to a customer, but because of having to wait for gas, they were late. Well, that didn’t go over well with him. And he leaves them to setup the waterbed on their own. Valentine decides that he should flood the guy’s house by leaving the water on in his bedroom. There are a couple more run-ins with this particular customer, and it ends with them trying to run from him, but run out of gas. And this segment of the film ends with the customer distracted by a couple of women he notices. eh? Again… I will forgive this movie anything.

After this, Alana takes a turn at politics and she jumps in on the campaign for Joel Wach’s mayoral campaign. Valentine helps out a bit as Alana goes all in on this new opportunity. But eventually he bores of the campaign when he overhears that pinball will soon be legalized. Pinball was illegal? (Why yes, yes it was Taylor. It was considered a “menace to society.” Huh. Who knew?) Regardless, as a result of this insider news, Valentine decides he should open up an Arcade. I mean, because of course he did. But along the way there are protestations, exclamations, proclamations, and the normal strife between Valentine and Alana that sort of pockmarked this entire movie.

Complications. Chaos… And Alana decides… she’s going to go find Valentine. Complications. Chaos. And Valentine decides he is going to go and find Alana. He goes that way <—— and she goes that way ——->. Right? Your standard romantic comedy mix up. But when they finally find each other, Valentine introduces her at his arcade, “Everyone! Let me introduce you to Alana Valentine!”… she responds with, “Idiot!” And then he kisses her.

A Few Thoughts on Licorice Pizza

Paul Thomas Anderson doesn’t do anything accidentally. Zero things. Nope. Not when you have movies like There Will Be Blood, Punch-drunk Love and Phantom Thread in your resume. But he does make glorious weird choices, which you will never see coming. Sort of like the title of the film, Licorice Pizza. Two decidedly good things… but together? What? (The title actually refers to a chain of long since gone record stores that ran through Southern California.) Similarly, the story is about two decidedly different, yet similar things… Alana and Gary. It’s about her conflict about Gary as an immature 15-year-old… but absolutely everyone else she meets is even more immature than Gary is. Right? For some odd reason, this 15-year-old is the most put together male in this entire movie… and that even includes Sean Penn for the love of all! By fifteen, Gary is an established actor with a show under his belt, a full-on acting career, a business or two promoting… things. And more ideas for new businesses than he knows what to do with.

But we watch as Alana struggles. Struggles trying to decide what even growing up and being serious about life even really could mean. Is it a singing career? Is it an acting career? Is it a waterbed store investor? A politicians right hand man? What could it possibly mean to really get serious about this thing we just … take too seriously? And ultimately, at the end of the day, she just realizes that she might as well keep hold on the one thing that makes her happy… Gary and his glorious view on life?

The film though, really isn’t the sum of its parts. It’s not the “magic” of the waterbed interlude. Or the New York acting vignettes. But rather its the combative relationship that is Alana and Valentine. The chemistry between the two of these people are what make this movie happen. I was sort of curious about how the hell this movie came to be… and I realized that Anderson was doing music videos for Haim. As in Alana Haim, who is a backup singer … for her sister? So that is how Anderson found Alana… the actor, not the character. He found the character in just writing about vignettes from his growing in up in the Valley. (When I was growing up in Los Angeles, I was there in the height of the Valley Girl flash fire… which, if I think about it, explains quite a lot about me, psychologically. Huh. Like – no way.)

If you look closely, you’ll see that many of the different characters were tightly cast to huge actors of the past. Gary Goetzman was a child actor who appeared on the Lucille Ball show, Yours, Mine and Ours. (That was the show I was trying to place earlier in this write up.) Eventually he became a producer for Tom Hanks. Better yet, Christine Ebersole’s role as the talent agent is sort of a full tilt version of Lucile Ball. And Sean Penn’s role was based on William Holden. Heck, some are called out directly. Like Joel Wachs, Jon Peters (played by Bradley Cooper… you know, the irate waterbed customer), and was actually a boyfriend of Barbra Streisand apparently. It’s almost like Licorice Pizza is a more low key, cuter version of Once Upon a Time… In Hollywood. It’s a glance at the hey day of this golden Hollywood era. (Funny, it did seem pretty golden to live there then, but I’d never move back! hahah.)

But all of that sort of is just besides the point. This movie… 100%, beginning to end, is Alana and Gary. Their avoidance of each other, and their obvious attraction to one another. The oil and water of it, and their donuts and coffee of it all. I could literally watch Alana read the dictionary she’s so fantastic. And Cooper Hoffman?!? Where did he come from?!? He’s magic as well. The movie is just a golden glimpse at this idea of the perfect crush. I had forgotten even what that was like… but wow, this movie reminded me of what that feeling really could be like again!