Americans Don’t Get the World Cup…

Americans just don’t get what being fanatical about a sport even looks like.  No.  We just don’t.  When I moved to England for a bit I experienced a whole lot of amazingness that I just didn’t have context for coming from America.  Zero.

For example, watching the winter Olympics with students from fifty different nations?  The Brits were calling the French, Frogs and the Norwegians were calling the Brits pacifists, and the Brits were calling the Norwegians Whale Killers… it got intense up in there real fast.  I remember walking out to go get something to eat with an ex-member of the IRA after watching some Olympics.  And we were joined by a member of the police that hunt the IRA.  Seriously.  And before we touched the car they would always check for car bombs.  So I asked if they would let me do it.  They both laughed at each other and said sure.  What does one look for when looking under a car for bombs I asked, as I was peering suspiciously under the car.  Hahah.  Needless to say, after I checked, they both checked as well.

A little while later a bunch of us went in to Manchester and it happened to be during a game between Man United and Man City.  Yeah, two teams, same city… they hate each other.  I don’t even have the words to describe it.  It would be like if the Broncos and the Raiders both were from the same city… TIMES INFINITY. And whenever they play each other its called a Manchester Derby.  This phenomena has been going for hundreds of years now.  And it even has a wikipedia article about it.  Seriously.  So, we were there when these two teams played a regular season game.  Yes?  Normal event.  Not for the championship or anything.  When Manchester United won the city exploded.  Literally went up in flames.  Cars were flipped.  Lit on fire.  It was nuts. Like, madhouse nuts.  Not euphemism nuts.  Literal craziness.  LA riots is the only equivalent thing I can think of.

And then I snuck into Wimbledon and watched.  (For the record, I paid to get on the grounds (5 quid) and then from there I had to sneak into see anything other than warmups and practice.)  Alright, that was relatively sedate comparatively.  It was crazy fun.  But it wasn’t riotous, it was tennis after all.  So that would be a bad example. 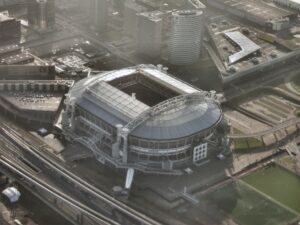 But a couple years ago (three now I think) I went to Amsterdam to visit the offices of SDL Tridion – a very high end web content management solution, and their offices overlook the AJAX stadium.  You can actually see the office in this photo here.  And I happened to be there during a Bruce Springsteen concert… whatever.  And I was also there when the Ajax had a game.  But keep in mind – AFC Ajax was founded back in 1900, making it one of the oldest clubs in Europe. They have earned 29 league titles. So when they play its a big big deal. So big that I actually left the offices before the game was over so I could leave… at all!  haha.  It was ridiculous.