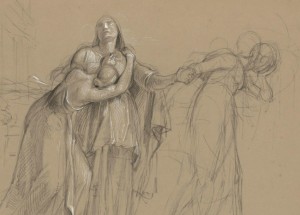 Four Chapters! Phew. The book of Ruth is only FOUR chapters!  I could do with a break and I’ve only been back pushing on this effort of mine for a week or two! If you’d like to follow along from the beginning you can do so here.

Ruth is a nice little slam dunk of a story, especially here in the Old Testament when all manner of craziness requires research and what not. But not with Ruth. Ruth is a simple story, easy to understand, and simple to explain. Its actually so simple I have my own curiosity as to why the heck its even included in the Bible. But I’ll get to that later. First, what happens in these four chapters?

Queue the light on our flannelgraph – where our story opens with a happy little Jewish family that has developed something of an issue on their hands. We have a famine on our hands for the poor inhabitants of Bethlehem. Queue the flannel donkey and the flannel piles of household items, because Elimelech and his wife Naomi and their two sons, are needing to move to Moab. Fast forward ten years and the two boys have married local gals named Ruth and Orpah. But then disaster strikes as all the men of the family die tragically.  We are not given the details of how all three men pass away.

I personally can’t imagine losing a significant portion of my family. To lose my wife, and my two daughters would be shattering. Reminds me of a local woman by the name of Kara Tippets who recently died of breast cancer and the dialogue that occurred nationally between Kara and Britney Maynard. The national dialogue about the “right to die” was an amazing ray of light in an extraordinarily hopeless and bleak conversation. My bringing Kara up really has nothing to do with the suicide dialogue, but more simply to do with a pastor and his four children who walked through the valley of death with his wife. To do that over and over again with most of the members of your family would bring one to their end I’m sure.  It was so bad for Naomi that she changes her name to Mara… or Bitter.

“Do not call me Naomi; call me Mara, (which means bitter) for the Almighty has dealt very bitterly with me.” (Ruth 1:20)

I can’t really blame her too much for completely shutting down and thinking this about God. I personally have been there and questioned if God had abandoned me. I remember that being one of my random thoughts that flew through my head as I “flew” from the top of my roof to the concrete below. But losing your husband and your two sons is a death nell in this society, especially during a famine. So at this point in our story it leaves us with Naomi, Ruth, and Orpah man-less. Here Naomi decides she need to move back to the farm of Bethlehem and hope for kindness from the locals there. This move was an act of faith but she had heard that God had provided bread for His people and she thought that maybe moving back would provide some relief.

But let’s pause here for a moment though. You need to understand how people work from a Judaism standpoint. You were either a Jew, or you were a gentile. (Yes, go ahead a spit a little when you say it, ‘G-heeecth-entile’. Perfect.) There wasn’t much of an in between. Naomi was a Jew. Her sons, Jews. Daughter-in-laws? Both gentiles.

Naomi decides to head back to Bethlehem (ten years is enough time to get over a famine, right?) and her daughters-in-law pack their luggage and join her. Naomi begs the girls to stay behind and, while Orpah is convinced and high tails it back to Moab, Ruth pledges her devotion to Naomi, forsaking her god and her people to become part of Naomi’s life. Ruth’s stubbornness pays off and Naomi lets her tag along.

In Bethlehem, things are not good for the ladies. Naomi is feeling down and out and Ruth is reduced to gleaning in the barley fields. There, Ruth happens to run into a well-known rich guy named Boaz, who instantly takes a liking to her and offers her all kinds of sweet gleaning privileges. Boaz also happens to be a relative of Naomi’s late husband, which is very, very important, since Boaz would have an obligation to marry Ruth and provide for her as family.

When Naomi hears about Boaz and what a stand-up guy he is, she hatches a plan for Ruth to snag him as a husband. She tells her daughter-in-law to visit Boaz at night in secret and lie at his feet (it’s sexy, trust us). Ruth does what her mother-in-law asks and Boaz is pleasantly surprised to see the cute girl from the fields is interested in him. He tells Ruth that he would love to marry her, but that there’s another relative with even closer ties to her in-laws. Boaz sets out to meet the guy and we are left holding our collective breath while we wait to see who Ruth will end up with.

As it turns out, this random relative is interested in buying some land that Naomi has, but he’s much less interested in taking her daughter-in-law as his wife. So a deal is struck—the other guy renounces his claim on Ruth and Boaz is free to marry her. Wedding bells start ringing and everyone is happy.  Soon, Ruth and Boaz have a son, which makes Naomi über happy. The women in town name the baby Obed and, surprise, surprise, he goes on to be the grandfather of King David. Talk about a happy ending.

In the end, Naomi got her real name back. She was no longer “Mara” – bitter; she was delighted. Boaz and Ruth had a child; Naomi had a grandson. Here’s what the women of the town said to Naomi about the little boy; “And may he be to you a restorer of life and a nourisher of your old age; for your daughter-in-law, who loves you, who is better to you than seven sons, has borne him.” (Ruth 4:15)

More importantly for me is our continuing thread of the love story that God is telling us throughout the entirety of the Bible. Ruth is set in the time of the book of Judges. We see terrible terrible things happening throughout the Biblical world of Judges. We see child sacrificing, and captivity. We are seeing a people caught in draught and loss. But here in the midst of this time period we are presented with a story of Redemption and God’s restoration. Naomi’s husband leaves her high and dry. Her sons pass away and she has nothing.  Even Orpah leaves for her home and her family. But Ruth stays with Naomi and desperately will do anything to be grafted in to the Jewish faith:

“Look,” said Naomi, “your sister-in-law is going back to her people and her gods. Go back with her.” But Ruth replied, “Don’t urge me to leave you or to turn back from you. Where you go I will go, and where you stay I will stay. Your people will be my people and your God my God. (Ruth 1:15-16)

And Ruth’s faith is rewarded a million fold. Not only is Ruth’s faith rewarded for Naomi, but also for herself and how she is remembered throughout History. In Judges we talked about how King David’s line came through a prostitute. And this week we see how David and Jesus’ line go through a gentile’s line.  More specifically, Ruth the gentile was the great grandmother of King David. For me I learn a similar lesson here as we did last week, that if I desire to draw close to God he will draw close to me. That even though I am a gentile, a sinner, and set adrift in my own sin… that God will provide a way for me to be reunited to Him. That is what the atoning work of Christ is all about. It isn’t a cliché. It is critical to my life today. It is critical to my purpose and my perspective each and every day. Ruth was faithful to Naomi, and was rewarded. I too hope to be considered faithful – not so that I am rewarded, but just so that I can be reconciled to God.