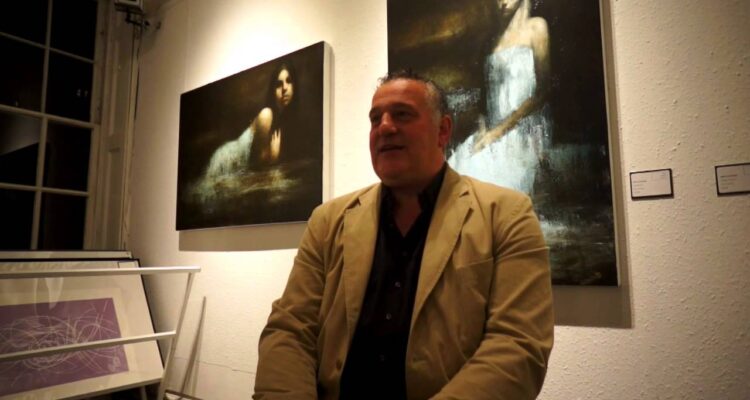 Jealously isn’t really a good characteristic to have. Causes everything to take on this greenish tinge. I wouldn’t know from experience at all.  No. And on an unrelated note I have had an amazing opportunity to chat with some of the foremost artists in the world today… IMHO. Artists with such extraordinary range and skill as to boggle the mind. Even enough to make one jealous, if that is your leaning. Good thing I’m safe in that department. Cough.

Occasionally I get an idea to contact an artist, or a movie director… or game developer, and I craft the email – with mouse poised over the send button, hovering on the edge of possibility – and I wonder, hrm. Is this really a great idea? Who am I after all? And then I remember there is only a mouse click away from infinite possibilities. I have made great friendships by clicking that send button as opposed to not sending it. And the percentage of people who have declined is somewhere around 5%? Most everyone is kind enough to chat about their work, and about what makes them tick… and it has really been quite an amazing experience.

To that end, today, I have brought you yet another fantastic little interview with an artist that makes me green with all kinds of envy, Mark Demsteader.

Mark has been turning heads in the UK art scene since the early 90’s.  He is so well regarded now that he is known as the premiere figurative artist in the whole of the United Kingdom. Mark’s paintings are in high demand as illustrated by his understandably high asking prices at the major galleries that represent him. And he has even done an enormous non-profit effort with Emma Watson that raised ‘a good amount of money’ for CAMFED. Here is what Emma had to say about CAMFED:

CAMFED works with girls in Zimbabwe, Zambia, Malawi, Ghana and Tanzania. Without their efforts, millions of girls in these countries wouldn’t be able to go to school to get an education and to improve their and their family’s lives, and this is mainly due to poverty. Families in poorer rural areas in Africa simply can’t afford to buy books or pay school fees for all their children, so they have to make the difficult choice as to which of their children should receive an education.

I only mention the CAMFED bit as it comes up in our conversation a couple times. Never mind the fact that it is an awesome thing to support and be a part of! Seeing as though I completely love amazing art, and couple that with non-profit work in Africa, it seems golden. Never mind that I personally work for Compassion International, an International NGO that is helping kids around the world, I can get behind this kind of charity work… that is for sure!

Alright, let’s jump to the most interesting bit, the conversation between Mark and myself:

Taylor – “To start off, In stead of asking you specifically the meaning of any particular piece, maybe you could share what your perspective on life is. Not to start off too grand or anything but in your opinion what might be the meaning of life be from where you sit?”

Mark – “This is the mother of all questionnaires but I’ll have a go.  The meaning of life isn`t the easiest one to start with but I’m up for the challenge.

“When it comes to how my work sits with me personally i suppose it`s just something i`ve never really thought about. When i first went into a gallery as a kid i knew what i wanted to do so that was that, i think you eventually become part of it and i see a lot of contemporary artists whose work is described as challenging or cutting edge whichever the latest buzz word is, but if thats how they communicate through their work i find it basically fake. All i know is when i look at work from the history of art i can feel their humanity and desire to share with the world something that say`s i was alive and this was me.That`s after all what rembrandt self portraits were all about and why they are so beautiful.”

Taylor – “I’m just going to toss out a few rapid fire questions around technique and the hows of your pieces. Your drawings are “Pastel & Collage”… um. The Pastel I get, but what is the collage portion? Is it just a wash of water? Watercolor over top? And in your oils, its as if you chunk oil texture onto the canvass to prep ahead of time? How do you setup your canvass before you start? And the final HOW question would revolve around your base coat, do you start with a dark base and build your lights? Or do you start with a light background?”

Mark – “The collage bits are not obvious on first glance but i build up areas with bits of torn paper to try and suggest bone structure under the surface, it just breaks up the image from a flat 2 dimension.In the paintings i usually start with a mess to be honest, i will underpaint in acrylic not always but sometimes and then put in texture with a pallet knife, i mix the paint with wax to give it extra body, it`s sometimes referred to as cold wax painting. I start light then go dark and light again and so on, there`s no real method just put it on scrape it off and see what happens.”

Mark – “I try to use colour abstractly, so it becomes about moody darks and bright textured lights, it`s all about trying to project an abstract idea like emotion through a physical object. (well you did ask)”

Taylor – “You have mentioned before that after the family business closed in 1990 you pulled together your portfolio, “then went down to London and asked around the galleries to see if they were interested in looking at my work…” – the following answer then said, “3 years later I finally got a gallery to put 3 pieces in show.” The gravity and intensity between those two answers couldn’t be more intense to me. What were those three years like and what did you do – did you just constantly keep walking in to every gallery in London? How did you continue on? And how did you finally finagle that first big break?”

Mark – “Yes i just kept pestering them, i went to London and walked around to see what they thought, i was just after feedback really some of it was helpful some of it was bizarre and the rest ignored me, i then realised the art world is different from people who do the work, they are basically a cross between estate agent and used car salesmen. What they are looking for is sales end of. As i said earlier though i believed it was what i was destined to do so i did`t even question or think about what if i can`t. I was also skint so did`t have any other choice than carry on. Eventually one dealer said i`ll put some in a mixed show and they sold on the first morning so that`s when galleries take interest in you.”

Taylor – “Much hay has been made of your bevy of amazing paintings with Emma Watson, would you do something like that again? And if so, who would you most like to do it with? Maybe I can contact them for you! hahah. Not that you’d need help in that department, just would like to be a fly on the wall.”

Mark – “The Emma show was just by chance and it was good to do but i wouldn`t like to make a habit of just doing celebrities, might of made a better job of princess Kate though, feel for the guy who did it he got absolutely mauled.”

Taylor – “You’ve mentioned in the past that you get up each day with the hope to do something special that day – since making that comment, can you think of a moment when you actually achieved that? When you yourself thought, yeah, that’s really quite extraordinary? Maybe a specific painting as an example? Or are you still striving after that special something?

Mark – “Got up this morning and thought right i`m going to do wonders today, gave up at lunchtime and thought i`d write this long essay to you instead. definitely will do a great one tomorrow though. Anyway, I hope that all makes some sense.”

Taylor – “Well said, well said. Kudos to you for even trying to answer all of these questions. I definitely set a high bar for you and you absolutely killed it. Well done. I will say this, that I just adore the British ability to turn a phrase. No idea what skint means in the abstract, but in that sentence it was gorgeously played!  hahaha. I went to school up in the Lake District and had a couple of British roommates, oh and an Irish roommate as well… and think that was more an education to me than the actual schooling.  I still perforate my language with the occasional bullocks or sod off… mainly because it really means nothing to Americans and it allows me the ability to swear without swearing!  hahaha.”