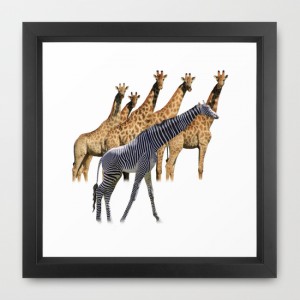 I recently was chatting with my wife about the diversity of creation. About the amazingness of it all. The mountains, the clouds, the animals… elephants, zebras, clown fish, eels, lions, tamarins, giraffes. You get the idea. And somehow we started talking about how we have begun to take for granted the craziness of these things just because we have gotten used to them. And so I said to Carolynne, it’d be fascinating to see the patterns of certain animals switched with other animals – to see them anew. “Like, for example, a zebra pattern melded with a giraffe… that would be weird.”

So I thought, heck, why don’t I try my hand at it in photoshop. Give it a whirl.  And the results came out so well that I decided to offer the print out on Society6. Feel free to support my site by purchasing a print!  Hahah. I mean, you know you want one.  But hey, maybe you could just follow my steps below and create your own! I plan to teach you the general principles which you could apply to really any photoshop painting you may want to do. 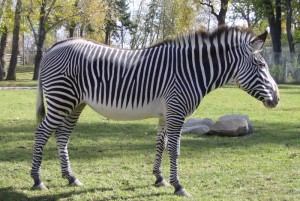 The single most important thing that you will need to start out doing is to select impeccable source material to work from. This technique I will show you needs original photos that you can sample from in order to blend the animals together. So, the first step is to grab a high quality copy of a zebra. I have a low-res version here. The original copy I purchased from a stock photo company in order to get the highest resolution imaginable. iStockphoto is one of my favorites because of its reasonable prices. You can also find free versions as well that have limited rights available that could work for this effort as well. But I would go with at least, at the very least 5,000 by 5,000 pixels big. If you can find a photo of a zebra that is closer to 10,000 by 10,000 you will be sitting pretty at the end of this process when you decide to print it out. If you don’t care about printing, heck 1,000 by 1,000 is just fine. 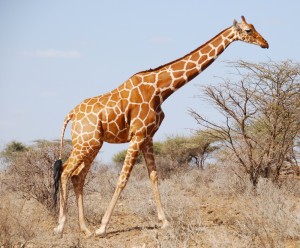 The next step is to find yourself a copy of a giraffe that will be used as our baseline for what our zebra will morph into. Ok? My giraffe photo here is only 1,000 pixels wide, but the photo I worked from was closer to 5,000… and even that was a little too low at the end of the day. But with this image of the giraffe I now have the form and the shape of the legs, the chest, the head, the neck. I have a great template for all the various shapes that we will lay the zebra right on top of.

Does that make sense? Great, onward to step two. 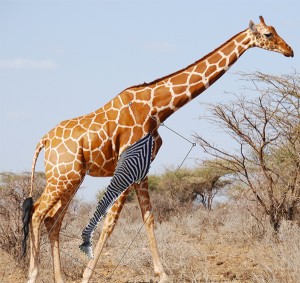 The next step is to start blocking in the crude shapes of the zebra over top of the giraffe. The way that you do that is simple in idea, but trickier in practice. At a high level we’ll start by cutting a bit of the zebra leg off and placing it on the giraffe. Then, you will transform your zebra leg (both rotate and transform) in order to get it to match the giraffe as much as possible.

If I went too fast for you in the last paragraph, go to your zebra. Then pick your polygonal selection tool. Outline your zebra’s leg, from the shoulder all the way down to the hoof. Once you have your leg selected hit ctrl+c (command+c if you have a mac). This will copy your leg into the buffer. Then flip over to your giraffe and hit ctrl+v (command+v), and this will paste your leg onto your giraffe photo. Yes? The photo to the right shows me with the leg selected, and then going to EDIT > TRANSFORM > ROTATE. Yes? The grab the corner of the selection and rotate it around until it aligns with the giraffe leg in alignment. Once that is done, hit the check mark and you will apply your rotation. 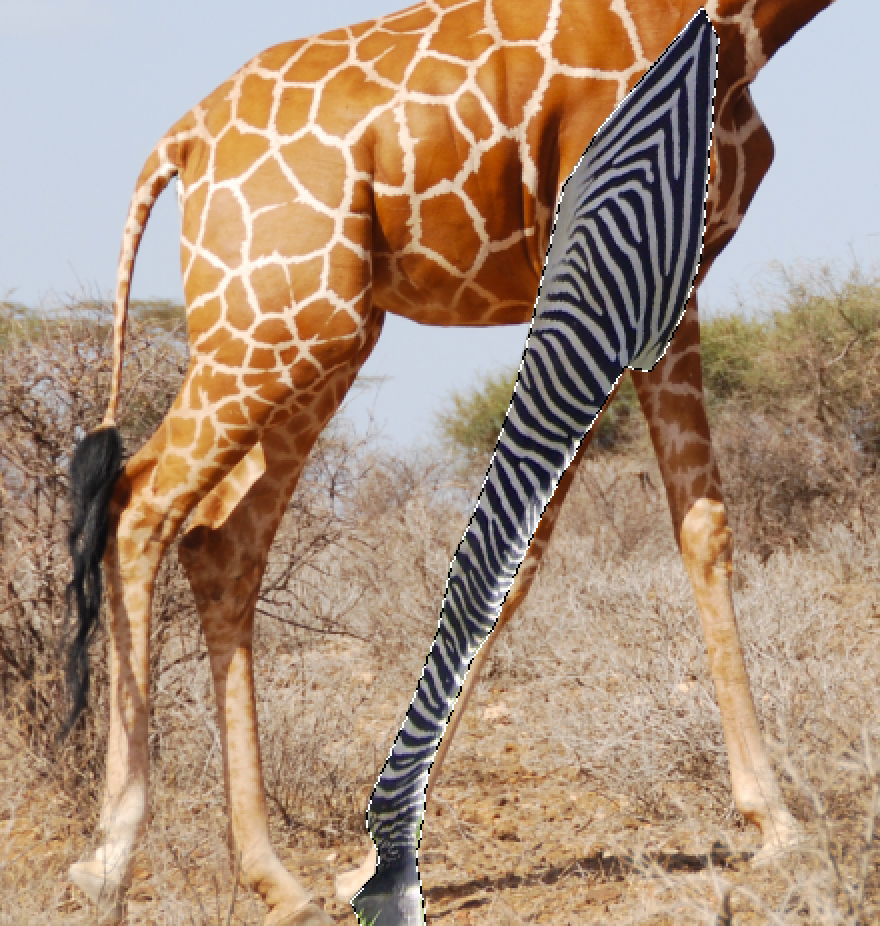 hen do the same thing again, but this time don’t select rotate – select EDIT > TRANSFORM > DISTORT. You will then be able to rejigger the corners and the edges, and it will allow you to distort your selection in order to make it match the giraffe leg underneath. Now, if you want to “bend” the bottom portion of the leg, you can do that by selecting the area of the leg where you want the bend to occur, and then hitting ctrl-x (command-x) and then pasting it, ctrl-v (command-v) back onto a layer above your leg selection. Then select that lower half of the leg and manipulate it like you did to the entire leg. Select, EDIT > TRANSFORM > ROTATE in order to give it the look of bending you are looking for.

As you begin blocking in the various segments of the parts of the zebra like this it will look choppy in places. Don’t worry about that for now. Right now, just snag each of the parts of the zebra, place them on the giraffe and get them generally lined up and where you want them. Ok? I’ve walked you through that for the first leg, but the rest will be very similar. Just keep going until have all the basic parts lined up.

Perfect, now let’s move on to a couple of the trickier parts of assembly. 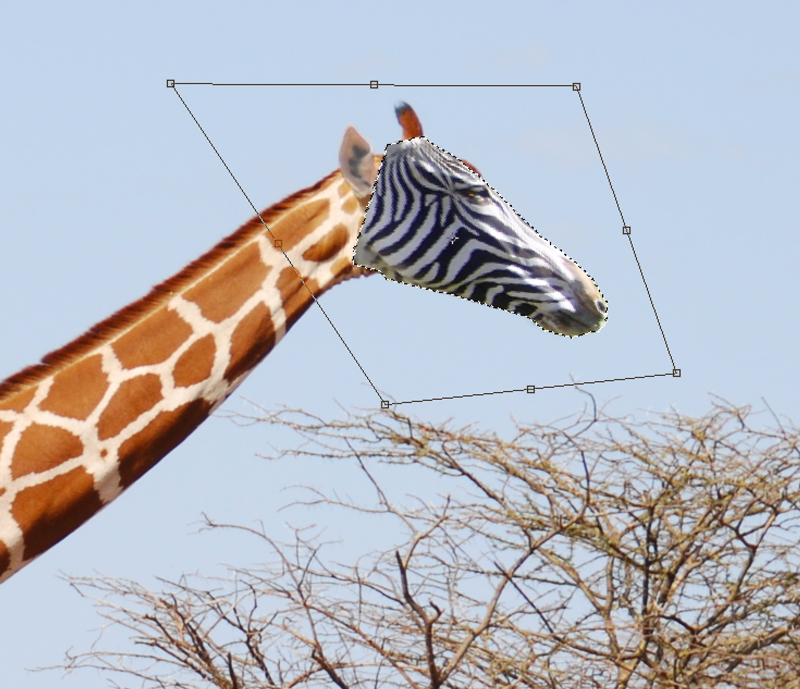 I’m sure there are many of you right now that are thinking… seriously? That’s all the instruction you are going to give? This is impossible! I will walk you through the two potentially trickiest pieces before I tell you how to paint it all together into one fluid animal. And that is the mane and the head.

When I first started working on the giraffe I was trying to figure out how to paint the giraffe like the zebra. But I soon realized how hard that would be. So I abandoned that whole tact, and began transforming the zebra into a giraffe. Very different approach. The similar problem presented itself when I began looking at their heads. Do I take the giraffe head, and paint it up like a zebra? Or wha?!? It was then that I realized that I could cut the zebra head off and transform it similarly to the other parts I had been working on and if I elongated it, and made it skinnier it really would look very similar to a giraffe’s head. You can see in this photo that I have pulled the selection up and to the left and down and to the right in order to elongate it appropriately. Also feel free to rotate and resize to your hearts content in order to wiggle it right into the right space. 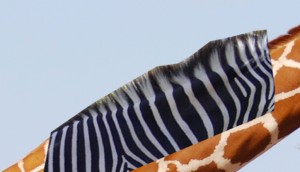 Now, for the mane – the mane is wicked hard if you don’t do it in the right order. Which I didn’t do at first. Your number one concern right now should be creating the neck first. You can do that by taking stripes off of your zebra’s back, and neck and just rotating and skewing them, and then trimming it back to match the space available. THEN, once you have your neck done, you can then begin to worry about your mane. If we were to be converting the giraffe into a zebra this wouldn’t be an issue because the giraffe’s mane is a solid color. But as a zebra’s mane matches the color of his stripes you have to do it in the correct order.

So, now you should have various layers of zebra bits Frankensteined all over your giraffe. Right? A head. Legs. Torso. Neck. Good. But it doesn’t mean it looks any good because the are just dropped onto your giraffe willy nilly. Now comes the part that requires some patience. You’ll need to start blending the layers together in order to get the patterns and the lighting to match. 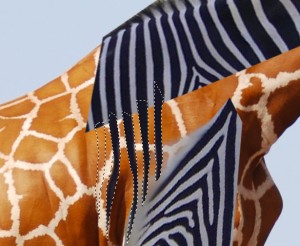 I generally do 90% of this work with the smudge tool. First select a single area between two patched sections of Zebra. Then start smudging the coloring and the patterns until they are aligned. You can actually also do a large section of your swatches this way just by continuing your patterns out by hand. Select where you want the black to continue, and just smudge the coloring into the area you have selected. You can do that with both your whites and your black alternately.

I have included a photo of me in mid-smudge on two different swatches so you can see what I mean. In this photo I am drawing out the lines of the zebra pattern free hand. I’ve selected the area I want to paint, and then I am smudging the color from above down through the selection. Once you have done the black, you would then want to create a separate layer and do the white beneath it in order to keep the consistency of the look. 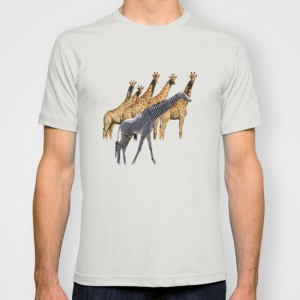 As you finish painting and smudging the various sections and patterns to match one another you will start to see the over all look come together. One thing I had to paint by hand was the nobs, or horns, of the giraffe. I couldn’t figure out how to transform the colors convincingly enough. And the giraffe’s ears are very different as well. So I just used the giraffe ears, and then did a color balance to make them more white. As for the hooves, I connected zebra hooves to each foot, but when I went to place the zebra I realized he’d be standing in grass. So to emulate that look I selected each foot, then went to SELECT > MODIFY > FEATHER and hit it was like a 30 feather. Then I erased them, giving them a very gradient, disappearing look to them.

And then it’ll come the time to figure out where your Zebra is standing. Is he at Walmart? In the African bush? I placed mine in about 42 different environments when I realized that it would look even better if he was being commented on by other giraffes. So I went looking for the highest resolution image some giraffes, and cut them up and placed them together behind our zebraffe. (Like that? I just coined that right here. Like on the fly. I know, pretty good huh?) Now its as if they were saying… holy cow… no, holy zebra, what is that? And our zebraffe? He’s just like, What? And it sort of brings our piece together, brings the final touches.

I’ve always wanted to do a Photoshop Tutorial, but never thought I had anything unique to show. Hopefully this shows a good way to create your lion/dog transformation – or your parrot/sheep amalgamation. The skies the limit. And although this is my first photoshop tutorial I’ve been messing around with Photoshop since before Photoshop was Photoshop. So I definitely owe the community a huge debt of gratitude for all the tutorials I’ve enjoyed over the years.