Growing up as a kid I fiddled with animation in pretty much every format imaginable. Flipbooks were just the beginning of my fascination. 8mm stop motion, physical photographs animated, line drawings, you name it I messed around with it. The art and science of movement just completely enthralled me. Take for example birds launching into the air, or gorillas flinging themselves across the ground, I love motion and studying how things move.

Well, when I ran across the new short video entitled No-A by Liam Murphy and a group of 8 students at the Savannah College of Art and Design I had to find Liam and chat with him some more about his short film.

“The world is a desolate, unforgiving place in this action sci-fi with a surprising amount of heart. We follow NO-A (Noah), as he attempts to rescue Aixa, the young woman that created him. In his desperate attempt to save her, he must face an unknown enemy force and fight to keep them both alive.”

Hahaha – I just realized the main characters name is pronounced Noah. There are a million questions I should have asked about the name and the foreshadowing of the ending knowing the name! But alas. Liam, feel free to comment after the article is published if No-A (Noah) sends out doves checking on the desolation of the earth! hahah. Anyway, here is the short film that had me in a twist when I first saw it.

Doesn’t this movie just ooze movement. No? Seems like No-A’s movement is based on the movements of a gorilla or monkey of some sort. The animation is fluid and dynamic. Just such a nice little movie to have been designed and developed by 8 art students.

I mean, look at this fantastic pre-animation concept sketch that Liam sent us of No-A. It really shows the design and artistry of this crew. Not just in their design of their protagonist, but also in their ability to visualize this character and animate him. 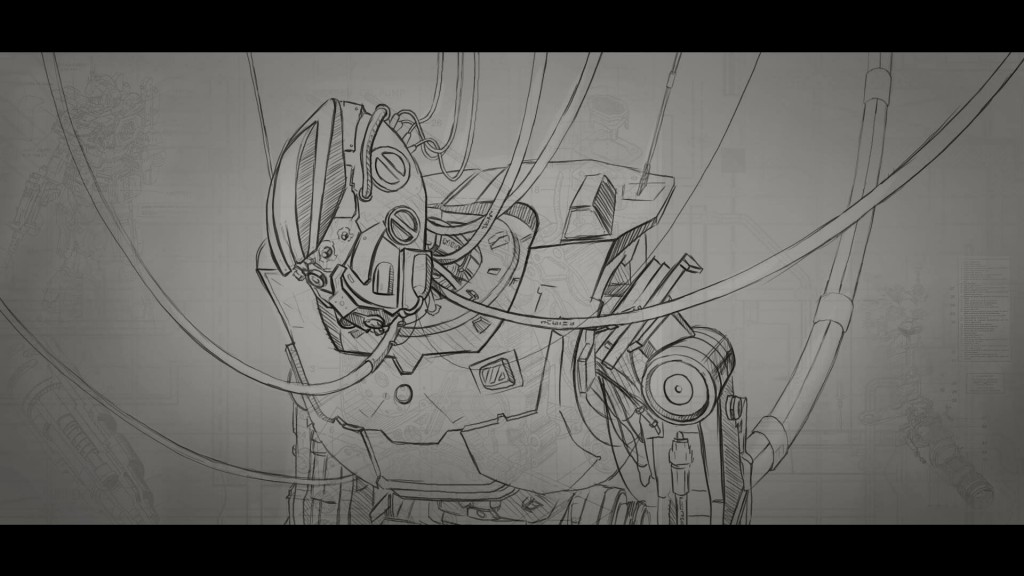 Anyway, I’m very excited that Liam made himself available to us to chat about his film with us.

THinc. – Why did you make this short film? Was it for school? Resumé project? Thumbnail sketch of something bigger? What was the genesis of this gorgeously realized little movie?

Liam – It was a student film that initially was being completed just to fulfill our degree requirements. The more we concepted the project, the more we grew passionate about it, and the more we wanted it to be much more than just a senior film to get us a degree. The original script was actually a 20 minute short film. What you see in the final product was my attempt to break down the story to the essentials. At one time there were flash backs and dialogue, but I knew that if we wanted to make the film look as good as we were hoping, we had to make it insanely short. Sort of a quality over quantity situation.

For me the ultimate ambition of the film was to help springboard my directing career. I had seen similar sci-fi movies help directors break into the industry so this is sort of my shot at that.

THinc. – Well can honestly say that we would all love to see where your directing career will take you. If No-A is any indication I’m sure it’ll be far.

No-A really reminds me of Kevin Adams and Joseph Ksander’s short film Gear, where there is such a compelling relationship between mechanical and flesh. Where did you get the idea for the relationship and the swatch of a story you bring us in No-A?

Liam – We were heavily influenced by The Iron Giant, King Kong and the Half Life game series. Originally the script was more focused on the action and fighting, but the more I storyboarded out the film, the more apparent it became that the relationship between NO-A and Axia was the most interesting part that could move the story along the best. 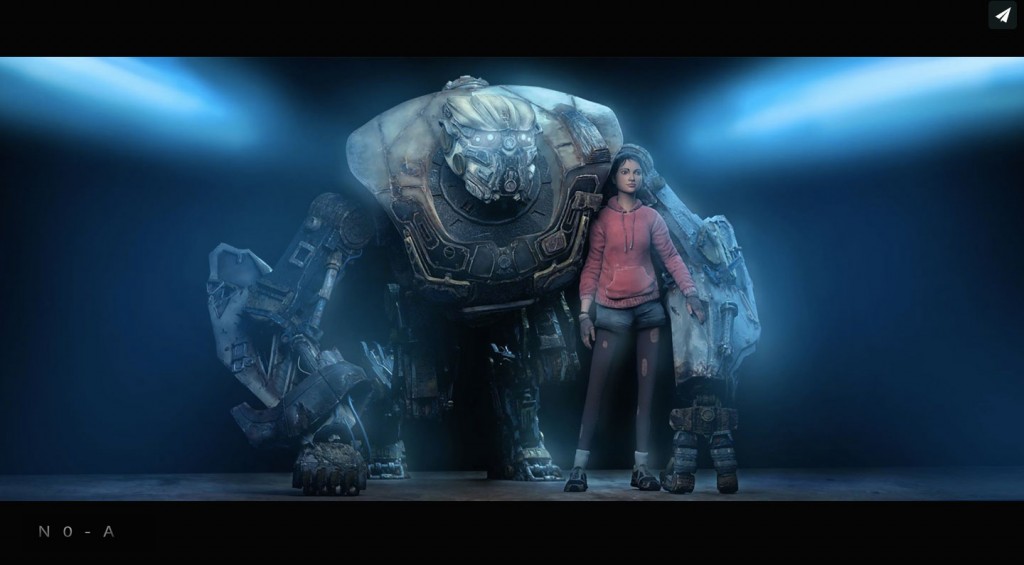 THinc. – The robot, No-A, has the gate and the run of an ape, and seeing as though there was the relationship with the girl… are we seeing a modern (post modern?) perspective on the movie King Kong? Is that feel and that relationship intentional? Were we suppose to have these flashbacks, or is it just me?

Liam – Yes! Absolutely. I feel like the underlying elements in these kinds of stories are timeless and transcend normal cultural limitations. We wanted to make something that would appeal to anyone from any part of the world. It’s also why there is no speaking/language in the film. It can be watched by (and hopefully enjoyed by) anyone.

THinc. – Very cool, I actually don’t know if I even noticed there wasn’t any dialogue. The action carried the short so well I guess I just hadn’t noticed.

Talk to us about the development and the CAD involved. I watched your build up videos and they are really telling of just how hard this would be to do. How long did it take to go from scribbles and sketches to fully detailed realizations of each scene?

Liam – I’ll use our main character as an example of our workflow. I started by drawing out dozens of rough possibilities for his entire body. Then I would post the many options to our forum where we would all vote/critique what was or wasn’t working in some of the options. Maybe the characters silhouette was too large or too small. Maybe his head was featureless and wouldn’t show emotions well. We would then narrow it down to one drawing that we liked more than the others. I would then flesh that drawing out until it was incredibly detailed. Once the character was impressive enough on paper to meet all of our standards, we would take it into Autodesk Maya and model it out. The modeling process took several weeks. The main thing here was to get as much detail as possible into the character and to make his proportions appealing. It became very easy for his arms to look too large for instance in 3D space. The we moved onto the texturing / coloring process. This was done in Mari. We first would block in this colors on a 2D image in photoshop. Once the character had a color scheme we all liked, our texturing artist would block things out and add in all the detailed rust, edge wear and paint chipping. Once the character was totally done in look dev, I would take him back into Maya for rigging and animation. I would then set up the skeleton of the character and begin animating his movements. While animating I would roughly layout the camera animation and sort of work back and forth until everything was working together. After that we would light and render the scenes. The rendering was completed with Pixar’s Renderman. 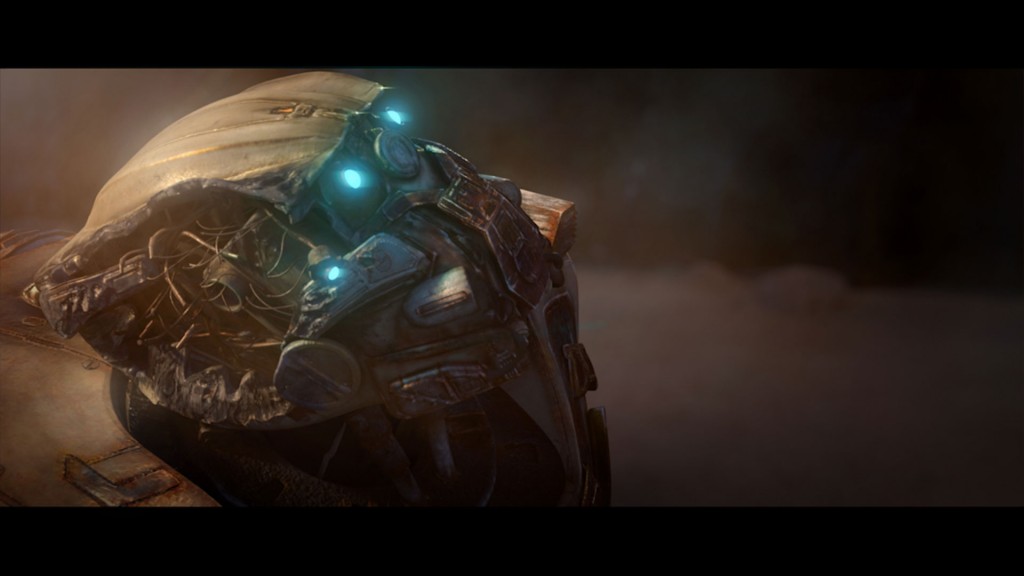 THinc. – Well all of the effort and attention to detail really does show through. You guys really did execute on this idea extraordinarily well.

Now, tell me… the story we see here is the guts, the heart of a much bigger story obviously – how much of that story is fleshed out in your head? Do you hope to get back and visualize more of this fantastic idea? If no, what do you want to do next with all these great animation chops of yours?! I have a few great ideas you could render if you are hard up! hahaha.
Liam – Thanks! Haha And for right now I’m just animating for games until all the dust settles around this film. Once it does, I hope to try and score a gig directing at some level in the film or commercial industry. That’s the ambition anyway! If there is a production house interested, I would absolutely love to expand upon the story of NO-A. We have a lot of the story that is untold. But I think realistically, I would like to direct something new. But we’ll have to see what the future has in store!
THinc. – Well thanks for taking the time out to chat with us all about your film. It was a lot of fun – and it really is exciting to see what 8 kids in college can do these days! hahah. I mean that in the best possible way. We can’t wait to see what your career brings next for you. I personally and selfishly would love to see more about No-A, but I get it that this is now your (and all 8 of yours) business calling card. I hope it opens a ton of doors for you guys.
And if you guys are interested (and I have no idea why you wouldn’t be) in seeing how Liam and the team built up these shots check out these other videos they pulled together about the making of. Very very cool stuff.