A couple days ago I posted about Petros Vrellis, who was doing some really amazing things with computer algorithms and string weaving. (Yeah, that is a crazy sentence… how is that even a thing?!? I agree.) And during that discussion I mentioned that I had reached out to Petros, and hoped to hear back from him soon. Well, a tussle with a spam inbox later, I finally was in touch with Petros himself. Which I was pretty excited about. I was able to learn a lot more about the details behind these amazing pieces. Which made me giddy as a school girl. So, I’m just going to interweave our email exchanges into a running conversation, but otherwise, I won’t be editing them much.

But before I start I just have to say kudos to all you artists out there finding new ways to say expansive and explosively inspirational things. You are an inspiration to us all. You make this world a better place. So, from me, and from others like me… thank you.

THE INTERVIEW:
Taylor: “Absolutely adore your string portraits! They are really quite amazing. I too am in IT and come to art from a engineering background. And can’t say enough just how much I love this series of yours. Thanks for your art. I love it.”

Petros: “I just saw your email; unfortunately it was sorted as spam for some reason. Thank you so much for taking the time to write about my work! Please let me say that I was not aware of the linify project till now.” (He’s commenting directly to my original post – which you can see here where I mention the linify.me project.) “In fact, I started working on this project about 10 months ago, and linify was published about 5 months ago (as I can assume from the following links here and here). So, back then, I was experimenting on a collage algorithm, when I realized that the simplest collage part is just a plain line. There was a long way to go… I tried various nail settings, as random (see attachment), spiral, circular etc. and I liked best the latter. Then I started knitting, which took a very long time… 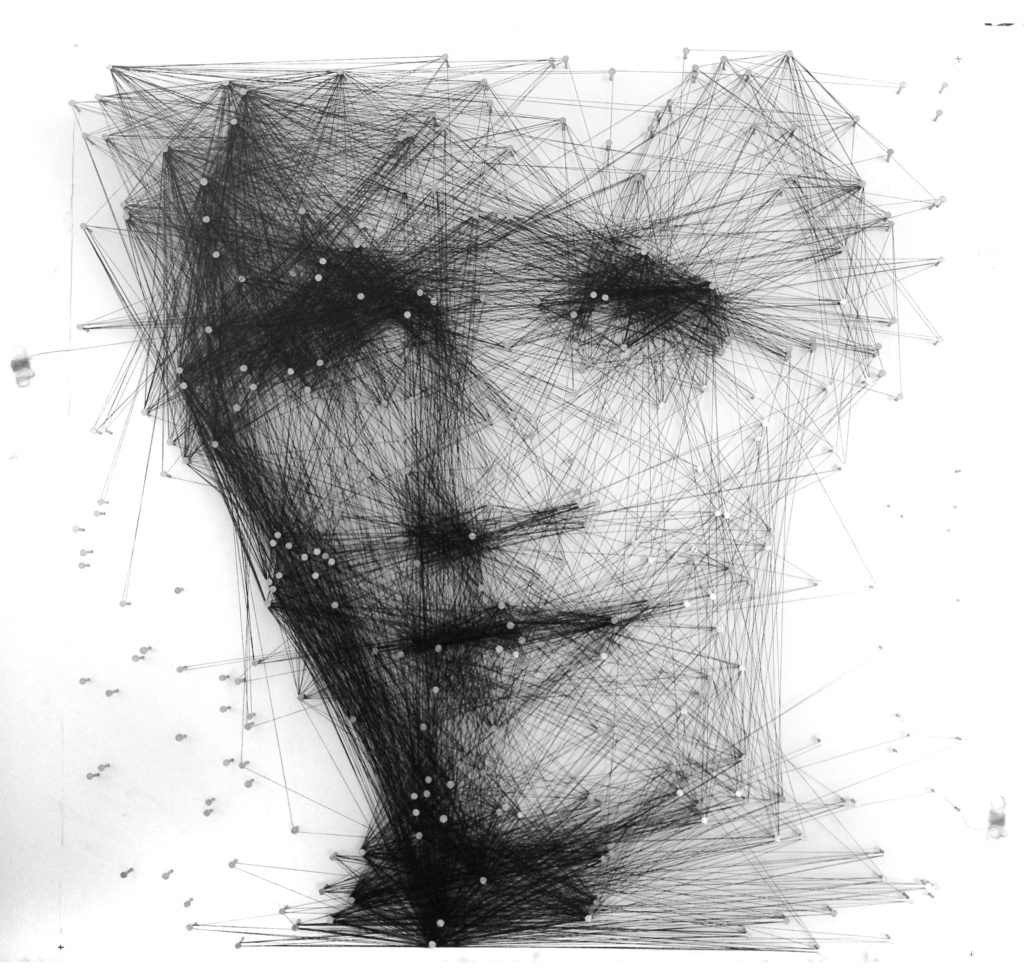 Taylor: “My apologies for even implying that maybe, possibly, that you’d gotten the idea from Linify.me. My intent in showing Linify.me was only to let others try the technology out if they wanted to. Personally I’m dying to create the technology so I can create a portrait of my wife. That would be so uber. Or my kids. Or heck… all of them! But I wasn’t trying to imply that you took the idea from linify at all. You are an innovative artist, and your other projects definitely show that. But with that said, holy cow… I love that photo you sent.” (It’s to the right.) “That is fantastic. Definitely think you need to do a series of weavings with randoms as well. (Says the guy who doesn’t have to do any of the work at all! hahah.)”

“When I watch the video of you weaving, I watched very closely (kinda strange, creeper like behavior really) to see if you had numbers on each of your nails? And I also tried to figure out how your algorithm spit out how to reproduce the image it generated? Did the algorithm spit out coordinates like this: 23 to 48,  48 to 81, 81 to 15, 15 to 145?”

Petros: “Thank you for your kind words. It’s great to have this positive feedback from you! Yes, the algorithm spits out coordinates of nails, one after another. As you can see from the comment in your site, someone has already post something similar in github https://github.com/christiansiegel/knitter It’s not that difficult to develop the algorithm, the most difficult part was to realize that this technique is possible. In other words, it’s a lot easier to solve a problem, when you know that a solution already exists!”

Taylor: “Oh yeah, totally… the hard part is the idea. Totally. I get it. 100%. I contacted the creator of linify.me and told him about you and he totally loved your art… here’s what he said actually…”

Jungosh: “Hey, I’ve actually been curious whether such a thing was possible, cool to see that there’s actually someone doing it.”

Taylor: “If you don’t mind my asking, how did you come to the decision to go with Renaissance portraits? (Personally, I think it is an inspired choice.)

Petros: “I did hundreds of tests before ending in El Greco’s portraits.
Here are the reasons for it:
– I really like and respect his work; I believe he was ahead of his time
– His portraits are very expressive; this balances the fuzziness that is inducted from the limitations of the knitting design.
– Like you said, I wanted to give a new context, to an existing form of art.”

Taylor: “And as a followup question to that, how much work did you do to clean up and modify the original paintings so that they would work with your program? I noticed at the end of the video it said, “Pictures inspired by El Greco” I believe? Which leads me to think they are modified. And I wasn’t able to find many of the exact paintings you did… so I just came to the conclusion that you had cleaned them up some, no? And also, do you have photos of all the other Greco paintings you have done online? I saw the one photo of all the different ones you did at the end of the video. But I could not find photos of them individually. They really are amazing. Each one such a gorgeous re-rendering of the original. And each one strips back the original to it’s geometric essentials. It’s quite phenomenal.”

Petros: “Yes, some cleaning/modifications of the originals was required to get satisfactory results. Here are some more photos https://www.saatchiart.com/vrellis
I plan to add all 15 of them in the next few weeks.”

Taylor: “Alright – well, thanks for humoring me and answering a couple questions. I’ve really appreciated your responding. Take care!”

Taylor here again… Thanks Petros for chatting with me. And he was right. Very quickly after posting about Petros’ project, a commenter that went by Alex mentioned that Christian Siegel had just created (as in moments before) a github repository of a new opensource algorithm to do a similar thing to what Petros’ has done with his algorithm. Which, obviously, doesn’t work nearly as well as Petros’ version. But it’s interesting to fiddle with none the less. It’s an interesting intellectual exercise. When I was talking to Jungosh about Petros’ brilliant artistic solution he mentioned that it would be fun challenge to solve.

Jungosh: “I don’t think it would be too complicated to modify my code to accomplish this. The hardest part would be creating a “matching” from one line to the next so that one continuous thread can be used. I would say you have two options, you can either draw a line and then fix one endpoint and look for the next “best” line with that one fixed endpoint. The other way would be just taking what Linify produces already, and then using a post-processing step to “fudge” the endpoints around so they meet, using something like the Hungarian algorithm to minimize distance between endpoints.”

And then Jungosh mentioned that the source code for Linify.me was available over at http://linify.me/javascripts/linesv2.js and http://linify.me/javascripts/workerv2.js  “There are a bunch of functions in linesv2.js, but most are UI stuff, the meat of the algorithm is in the “process” function and workerv2.js. A version I wrote in C++ also exists if that interests you, although that uses a bit more complicated “true” Hough transform, rather than the randomized version that Linify uses. Anyway, let me know if I can help, I can give you a better explanation of the algorithm if you want.” 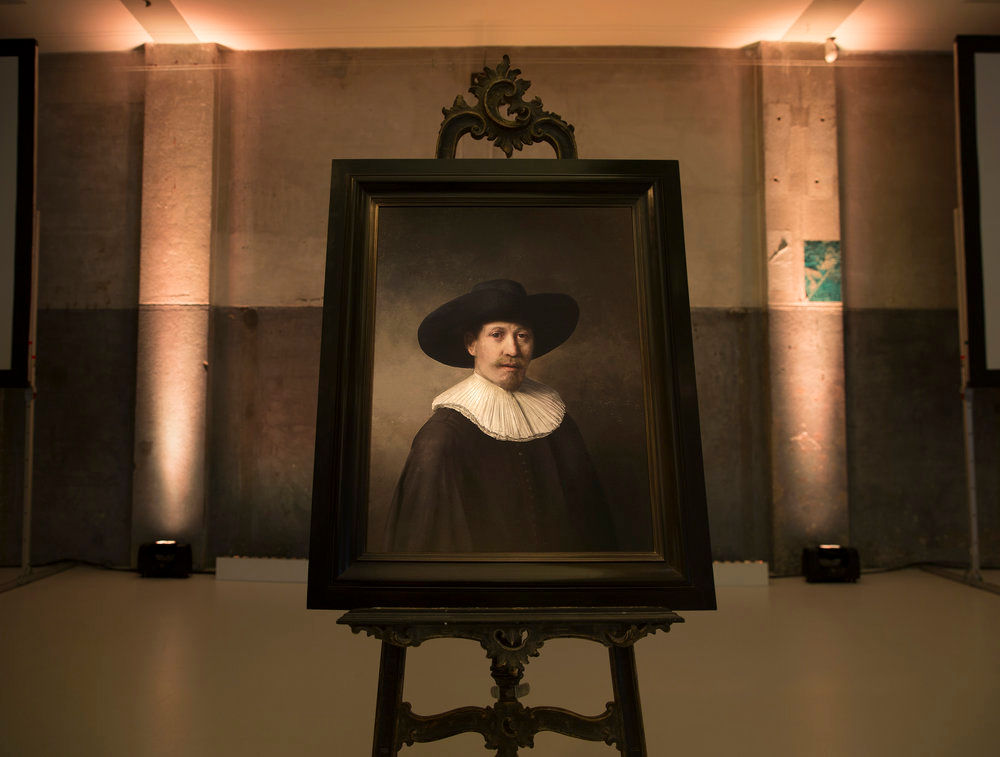 Which brings me back to the question of the day. What does it mean to be an artist?

Actually are you aware that technologists have created a computer algorithm that studied all of Rembrandt’s portraits (who happens to be my favorite artist of all time) and then created a “new Rembrandt”? Yeah, I kid you not. Read more about it over here. That painting is on the right. And sure… it is in the style of Rembrandt. It matches his brushstrokes. It matches his style. Everything. But is it a Rembrandt?!? hahaha.  Obviously not.

Just because Jungosh, and Alex, and Christian Siegel and I are able to reproduce what Petros did in code, it does not mean that we are now opening an art gallery in New York with our “weavings”.  It reminds me of Heather Dewey, she created a way to read DNA and create portrait sculptures from saliva of litterers. I kid you not. Could I recreate this science? Sure. Could I create a portrait from this data? Maybe… sure it’d take a buttload of work. But she is the one that did it. Heather Dewey will forever more be synonymous with DNA Portraits. I can create a million Warhol-esque Tomato soup cans. Or Shephard Fairey’s Obey prints? Oh sure I could. But that isn’t innovation. That isn’t art. Similarly… Petros has already created several different innovative ways of creating art. But this line weaving will forever be his. The rest of us that do it? We will all be in debt to him for his brilliant idea, and his fantastic artistic way of looking at life.

But I would be remiss if I didn’t point out that you can support Petros by buying out all his weavings and prints over at Saatchi Art. And oh by the way. Today is my birthday. So you can buy me one to celebrate! Ok, so it isn’t my birthday. But I promise to keep it wrapped until next June. I PROMISE. heheh. Seriously though, go buy one. I would. If I had 900 spare bucks. I’d actually even consider robbing a bank to get one. Anyone want to be my driver? Let’s go! haha.