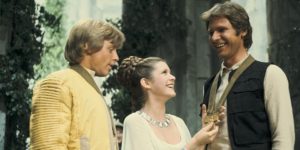 I didn’t fully grasp everything I saw the first time I watched Star Wars but I did know this… Princess Leia ran the Rebellion and she (not Obi-Wan Kenobi) was our only hope.

I am a bit of a movie nerd. I’ve shared my love with movies here. But the franchize that began my love of movies and was an iconic touchstone, a zeitgeist unto itself, was Star Wars. And the magic of Star Wars was the Royal First Family of these galaxy Wars. It all came down to the father, Anakin Skywalker, and his twin children, Luke and Leia. They are as important to Star Wars as King Arthur and Lancelot and Guinevere.

Geek confession: Over the years I have lofted up prayers to God for the lives of Mark Hamill and Carrie Fischer so that the story can continue on track. It was obvious to me, even at a young age, that the story was immortal, but the actors were not. And so I found myself praying for their well being and safety. I understood that they were not immune to traffic accidents, plane failures, or diseases. And so I’d pray that God would give them an extra dose of safety and intervention on their behalf. Selfish? Definitely. But with the end of episode 7, The Force Awakens, I found myself thinking of General Leia. Her vibrancy seemed to have lost a bit of her glimmer. She still seemed mischievous, to be sure. But it was clear that our favorite princess seemed tired.

It is clear that this mortal coil is temporary at best. And definitely tragic in every way.

I was recently chatting with my wife about how lucky we were. That our family is healthy. We are gainfully employed and safe. And the thought came to me, that this luck we have had? It’s only a manner of time before it completely runs out. Even the luckiest of us will eventually lose the battle at the craps table no matter how long the lucky streak has rolled.

60. Our princess lasted sixty short years before succumbing to this mortal fight. Not long enough by half. She bookended 2016 for us… a particularly awful year by any objective measure. She starred in the second biggest global box office hit of all time. Everyone thronged to see Carrie again. Or Leia. Either one. To see her interact with Han Solo one last time. And then she closed out the year with her book tour. She told of her affair with Harrison, and a small part of me danced a jig on the inside. And then just shy of the new year, her heart gave out.

And inside of me? A little light has gone out, and across the globe, it is as if a million voices cried out and then were silenced.

This teen that literally swooned at her appearance in Return of the Jedi mourns the death of a Princess and a Queen.

A middle aged man that is now too aware of his own mortality mourns the death of a Princess and a Queen.

You will be missed Carrie Fischer.