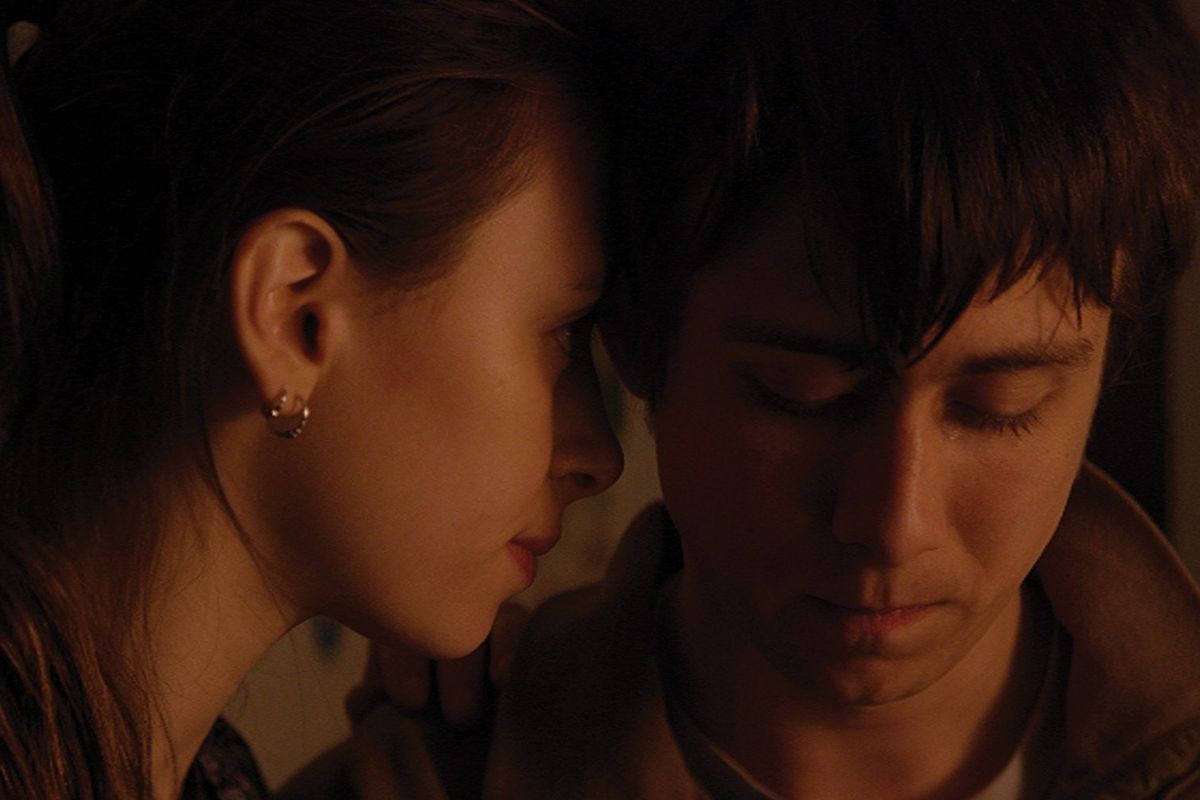 Taylor Holmes
cinema
October 10, 2017
Super Dark Times is a movie about the intensity and pervasiveness of guilt. About how we all deal with its tentacles and the after effects. Oh, and it's also a rip roaring good time. IMDB
Screenplay
Action
Acting
Headjobness
Reader Rating69 Votes
4.6

I loved this movie so much that I went WAY out of my way to stalk Luke Piotrowski – one of the two writers of this brilliant film – into answering some of my most desperate questions I had about the ending of this movie. Because, I, like you, HAVE TO KNOW! But we’ll get to that conversation in due time…

But first things first, Super Dark Times first hit my radar when it made a list of interesting independent films coming out this year. Super Dark was debuted at the Rotterdam Film Festival back in January, and has sort of been lighting up the film festival circuit ever since: Tribeca, New Zealand International Film Festival, Neuchatel, MotelX, Fantastic Fest, etc. The creators of Super Dark Times previously worked together to create the eleven minute short, Too Cool for School which made it fairly big at Cannes in 2015.

The film hits a pitch perfect 1995, replete with Clinton (Bill that is) sound bites, Walkman sensibilities, and an internet-less backdrop. It will remind you of The OA, Super 8, Stranger Things, and Stand by Me. But the back end, finishing flavors of Donnie Darko are what got me really interested in this particular film.

For those of you who haven’t yet seen the film, we are introduced to Zach Taylor (Owen Campbell) who introduces us to my childhood growing up in the 90’s. He’s a geek’s geek high-schooler that spends almost all of his time with the bulbous bouffanted neighbor Josh (Charlie Tahan). Things take a turn one day when a four-some of kids have an accident of epic proportions that rocket fuels the rest of this ride. When Allison – Josh’s crush – arrives and complicates matters even further, we watch as all four kids suffer from enormous psychological strain.

Come on. Based on my track record alone you should watch it. Never mind the fact that that trailer right there is fantastic. Regardless, I’m commencing Super Dark Times deep-dive in 3-2-1… if you’d like to join in on the discussion, go watch, then come back! I think it just recently was released on Amazon and a pile of other services.

The movie kicks off with one of the most obvious bits of foreshadowing the world has ever seen. The camera follows the blood tracks of something. We aren’t sure what at first. But then we realize its a buck that is bleeding and all but dead in the local high school cafeteria. And the scene ends with a cop put the deer out of its misery by breaking its neck.

After that we meet Josh and Zach, our two main characters of this movie. Two best friends, that are geek’s geeks. Basically they are me. I was them back in the nineties. From the avoiding the druggies and the cool guys of school, all the way down to the bedroom video game fixtures. Soon Charlie and Daryl join them and our duo is rounded out to a quartet of geeks. Is that a flock? Peacocks are an ostentation. These guys probably could double as an ostentation of geeks. They are pretty great debating the Silver Surfer as the loneliest of comic book heroes.

But soon they are out in the park/forest messing around. Josh has a samurai sword that he is messing around with. And soon it is discovered that Daryl has stolen some of Josh’s brother’s weed, and a few ugly missteps later and Daryl has the sword sticking through his neck. After Daryl dies Zach makes the extraordinarily bad decision to cover the body… in leaves, ditch Daryl’s bike, and then go on like nothing happened.

As the story opens up a bit we meet Allison and some of the druggie members of the school. But all of our introductions are tainted by the fact that these three guys have just killed a fellow student, accident or not. So Zach’s relationship with Allison, whom he obviously really likes, isn’t going the greatest because “things just aren’t going too well.” Not to mention the fact that we are regularly getting visions that can’t be reality… maybe they are dreams? Or possibly they could have happened recently in the past? And one of the biggest tells is that Zach’s cast is regularly missing. Regardless.

Take for example Zach’s vision about going to see Daryl in the woods. But instead of seeing Daryl he sees Allison, and they end up making out in the leaves. Huh. Guilt and Sex drive are one and the same? Aggression and procreation?! I got nothing.

Friendship as a Foil for the Plot?

As the story spirals further and further southward Zach and Josh appeal to their friendship to sort things out. But the big glitch here? They both like Allison, a lot. Which, reminds me of Primer… like a lot. Back in the day I actually made the case that Primer wasn’t a time travel movie, but rather a movie about friendship, and what would happen to a good friendship if the friends were given unlimited power. Similar things are happening here in the land of Super Dark Times. Josh, has found the super power of the ability to murder at will, and yet here we stand, with Josh and Zach standing outside a party arguing about a girl.

And sure enough, soon we find out that John Whitcomb – the blue haired druggie – is dead. He’d taken a header off the bridge. And coincidentally, Josh had been planning to hook him up with drugs recently as well. And we know that Josh hated John. This was obvious from their earlier run in. So Zach actually puts two and two together during a call (after he got Charlie’s sister’s number from Allison) with Charlie. Zach basically sketches out the following flow of events: Josh goes to Daryl’s body, gets the sword, hacks fingers off, then gives John weed on the bridge, and tosses him overboard… and now he’s on the street looking for someone else to mess with.

Because we are in for a bumpy landing. So with Zach realizing that Josh is bruising for a fight he begins looking for Allison. So he heads to Allison’s house. But she’s not there. Obviously, she’s at Megan’s house. So he hauls it to Megan’s and sneaks inside. And sure enough, Megan is dead, and Allison is tied up in the corner. And Zack goes out and up through the window – frees Allison – and then fights with Josh in a truly bloody duel to the death at the end. And when Zach is being treated for his cuts and stab wounds we see Zach looking over at Josh in the back of the police car.

NO! There is one more scene that we see before the credits. And that is Allison sitting in class. We see Allison listening, playing with her hair, letting her hair down. We cut back and forth between her and the person behind her. Back, forth, back, forth. Who is that person? He/she? She looked like a woman to me? And enough of a lookalike to Zach that I had to pause it to validate that it wasn’t him. So it’s not Zach. And we are seeing yet another slow-mo back and forth like we have seen throughout the movie between Zach and Allison. WHAT IS GOING ON?!?!?

And knowing that I would have to write SOMETHING about that scene for you guys, I decided to go to the source itself. So I contacted Luke Piotrowski – one of the two writers of the Super Dark Story screenplay – on Twitter and thought I should just share my one question for him:

I make no promises but ask away!

The kid behind her, to me, plays into that notion. We all see others as supporting roles in OUR story… but we never really know theirs.

She got caught up in another person’s fucked up story but survived & is back in her own.

Open to interpretation but MINE is that, yes she’s moving on. The scars are there, sometimes in sight, sometimes hidden but not defining her

Right? So from Luke’s perspective (a very un authoritative source) the last shot of the movie was all about Allison jettisoning out of this downward spiral, surviving, and reestablishing herself in the world in her own right. That she is moving on. That the scars of her encounter maybe physical and emotional… and are still there, but that they aren’t defining her.

Me? Not that I would ever, ever disagree with an author of a movie (cough) but, I told Luke my take. And that is that this shot, this woman that is behind her? She is the beginning of a Super Dark Times sequel. His response? He laughed and liked my tweet. Which, means I am absolutely, 100% right! hahahah.

I personally give this movie über high marks on many of the elements of this movie leading up to the ending. The balancing act and the push and pull in Zach’s mind about the craziness going on all around him. The psychological trauma and the dreams – which reminds me of It Comes At Night, and a million other movies, like Donnie Darko. But it doubled back on itself and instead of staying psychological it went full-on revenge gore flick. Which, I personally enjoyed. A lot of reviewers have deducted significantly for this double back gainer. But I actually get it. I dig what it was trying to do here. I just happen to disagree with Luke and think that they are setting us up for a sequel! hahah.

But ultimately? I think this movie is all about guilt. It’s about the effects of guilt. And the ubiquitousness, the tentacles (“Testacles? TENTacles, TENTacles” – be the first to name that movie in the comments and I’ll fly to where you are and give you a high five. (Time jump: Congratulations John Hazard, I hope the high five was as good for you as it was for me!) of guilt in our lives. Luke could have written in all of the violence as visions and flash backs/flash forwards that didn’t ever happen and it would have been just as powerful. (Some would argue more powerful) But I think we all deal with guilt. This overwhelming feeling of being trapped and hunted by this darkness. Which, seems a pretty accurate description of Josh… the personal manifestation of guilt on the warpath. But maybe that’s just me?

I don’t know, what did you guys think of the movie? I personally adored it. There are not enough movies out like this today.