Let Me Explain why Pontypool is Zombies Done Right

Let Me Explain why Pontypool is Zombies Done Right

Which brings me to my next win. Pontypool. Which, if i were clever enough, I would have hidden from you all that L, or Ned, or whatever they are going by today, is the one that told me about it. But alas, I’ve already let it slip and I’ve lost control of this fact. But I swear to you my best movie review ideas come from you all. I actually contacted a developer in the Ukraine just minutes ago and asked him if he’d build me a page that would allow you all to submit movies to be discussed here, and then let you upvote them. Which, is my idea. So I will be taking credit for that one. I built out a fullon bulletin board location and attached it to the site, but it took too much away from our conversations here in the comments. But allowing you all to post and upvote movie ideas is the best thing I could ever do to make my own life better. So heck ya! Alright, enough about the site and whatever. (Can you tell it’s my last night in Haiti and I might have had one too many Guiness?)

So why should you watch Pontypool even though you’ve never heard of it? Because it is a closed box movie with big aspirations. It is a closed box movie on the scale of 10 Cloverfield Lane… but maybe better? Hrm. Don’t know for sure there. But it gives it a run for its money, that’s for sure. It has something big to say when it is all said and done, and heck ya, it’s a lot of fun along the way. Personally, if I were you, avoid this trailer like the plague (see what I did there?) but heck, the choice is up to you.

I told you why you should see it. I was kind to you. I gave you a few unspoilery details. Told you about the big ideas it has. And you are still here? Reading? Really? I mean, come on!? Is that how you treat someone that is so good to you? No. It isn’t. You watch the movie first. THEN you read the thing. Right? Great. Good. 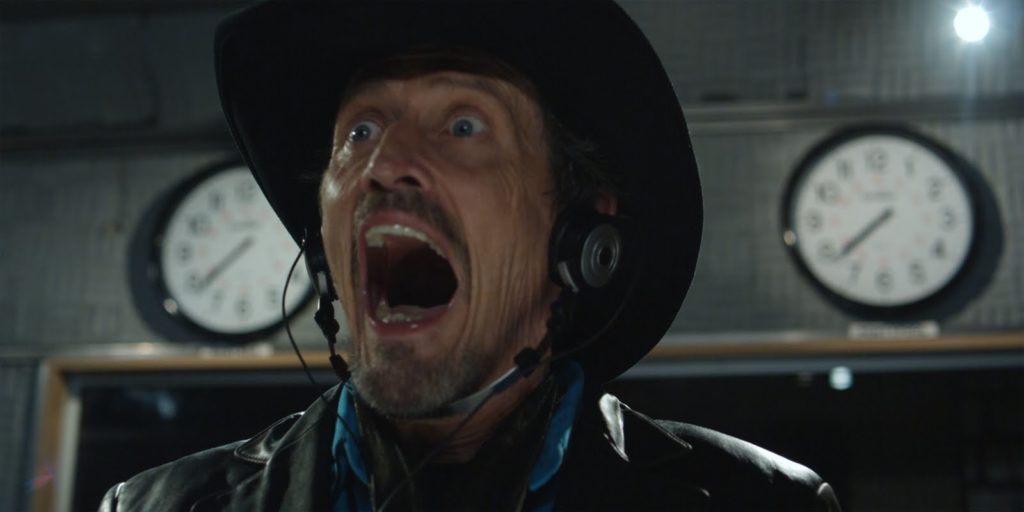 This movie really just consists of; Grant Mazzy – who is the radio host, Sydney Briar – the radio producer, Laurel-Ann Drummond – the radio assistant, and Dr. Mendez – the local town doctor. There are also a few feral zombies (are there non-feral zombies?) that eventually make an entrance. But realistically? It’s just four characters that populate this tightly closed box movie.

As the movie kicked off I was legitimately confused. All I knew was that this was a different sort of Zombie movie. Which, honestly, is enough for me. But the movie kicks off with mainly banter between the radio staff. There’s discussion about Mazzy’s conspiracy theories and Sydney’s desire to keep Mazzy on book. It really seems like this is an ongoing battle between the two of them.

But the cadence of the movie shifts, and the direction becomes a lot more clear when we start hearing about a crowd of people out at Dr. Mendez’s office. The radio station is the first to pick up the story and it seems to grow and grow quickly. Ken Loney, their “eyes in the sky” is sending reports about the unruly crowd and the chaos that is quickly spreading through the town.

What is most intriguing is how the screenplay keeps the story moving in such a compelling and interesting way. This actually could be a radio drama so little is happening on screen. But the cadence doesn’t slow, it just continues to build as each new revelation and escalation continues to play across the airwaves. Ultimately though, it is becoming clear that there has been a zombie outbreak of some size and that the citizens of the town are turning on each other and working actively to get their own victim or they pop and die.

Did you guys catch the copy of Snowcrash that entered the movie momentarily? Books are always dropped into movies for a reason. And I mention it because Neal Stephenson is a Geek favorite, and always a good read. The Baroque Cycle is always high on my recommendation list if you are into history. Possibly the most sprawling and fascinating historical novel I’ve ever read. Sir Isaac Newton as you’ve never seen him. But even better? The Cryptonomicron. Not for the faint of heart. I’ve recommended it to a number of people and many have found it hard to mentally solve. But it is literally brilliant. It’s two different story lines, one slightly in the future, and the other during World War II. And the book 100% deals with cryptography, crypto currencies, the intrinsic insecurities of money, nation building, sovereignty, Neal talks about all of it. It’s a mind blowing book.

But stop… Snowcrash, what is Snowcrash about? Oh right right right… it’s just a simple book about a virus that lives in both the virtual world called the Metaverse, as well as the real world – or meat space. It’s a truly old virus that taps into truly primitive areas of the human brain. And if it takes over your brain it turns you into a mumbling idiot. A babbling zombie of sorts. Cough. And it’s up to Hiro to decode the virus and to code a solution for freeing the enslaved zombies. Come on. You are seeing it right? Anyway.

Ending of Pontypool Discussed and Explained

When Dr. Mendez arrives through a window we begin to learn just how bad the outbreak is. And I was thoroughly confused when he says, “A victim needs a victim to suicide into…” Er, what? I honestly am not sure what that means. Do you remember when Laurel-Ann can’t find a victim? And she spews, and dies? I am guessing that that is one way that the infection is spread as the zombie dies.

And as we learn more about the zombies, we realize that they hone in on words, on talking, and that they are blind when communication stops. We learn that it could potentially be spread via words as well. That the virus could be contained in some words, if not in all words. So in an effort not to spread the virus Grant Mazzey and Sydney Briar begin communicating in French. Dr. Mendez moments before had spewed a fairly telling sentence: “We are witnessing a new arrangement for life, our language is our host. It could have sprung spontaneously out of perception. If it found it’s way into language it could leap into reality itself. It may be boundless. It may be a god-bug.” Which, I have to say is just one brilliant riff of writing. A god-bug? Hahaha. Life, reality, boundlessness? Brilliant.

But we are seeing that it isn’t when someone hears a word that they are infected. But rather when they understand the word. Which is an enormously key distinction to make. So basically one could essentially infect themselves by thinking of the word that carries the virus? Yeah, I think that that is the case.

Eventually Sydney Briar gets infected. She begins stuttering the word ‘kill’ over and over again. And it is then that Mazzy gets his break through idea. Kill is Kiss. And just like that Sydney is cured. But stop right there. By forcing Sydney to misunderstand the word Kill, or forcing her to think of it differently, he’s cured her? That assumes that the virus only stays resident when the infected/glitched word is understood. So that would mean that Mazzey has short circuited the infection AND ALSO cured the affect. Not only has he solved the communication of the dis-ease, but he has also made it so that she isn’t sick anymore. Is it clear what I am saying? So like Hiro in Snowcrash, Mazzey has cured Sydney’s broken brain.

And after that, it’s all a bit of house keeping. Mazzey and Sydney get on air and communicate the need to mis-understand the word that has infected them. To communicate out the recoding of the brain. And in so doing he has propagated the inoculation of society as well as the disinfection. And just like that, Sydney kisses Mazzey and the movie ends. (Get it, she kisses him? Not kills him? Yeah, I thought you might have gotten that. Sorry for being so painfully obvious.)

There were a couple of really great quotes as the movie spooled by – but my favorite, by far, was definitely, “Do you really want to keep playing musak for this genocide?”

But Mazzey, in a spirit of Pump Up the Volume, drops some really cool truths heading into the end of this movie. “Stop making sense!” He yells into the radio. “You are just killing scared people, you are like dogs.” And I feel like he could be saying that to us today. “We were never making sense… when Armageddon started leaching into our lives, into your ant hills, it was just another day… it was just another day where nothing made any sense at all.” So this movie is actually a metaphor for our lives today. People all around us are dying everyday. They are dying violently. Passively. Loudly and quietly. And none of it makes any sense at all. Right? We are thrashing wildly into the night. Zombies? That’s just another day of insanity.

No? What’d you think of it? I really really liked it.

Postscript… I’m currently stuck in Miami – good times – which, is it’s own Pontypool of sorts…