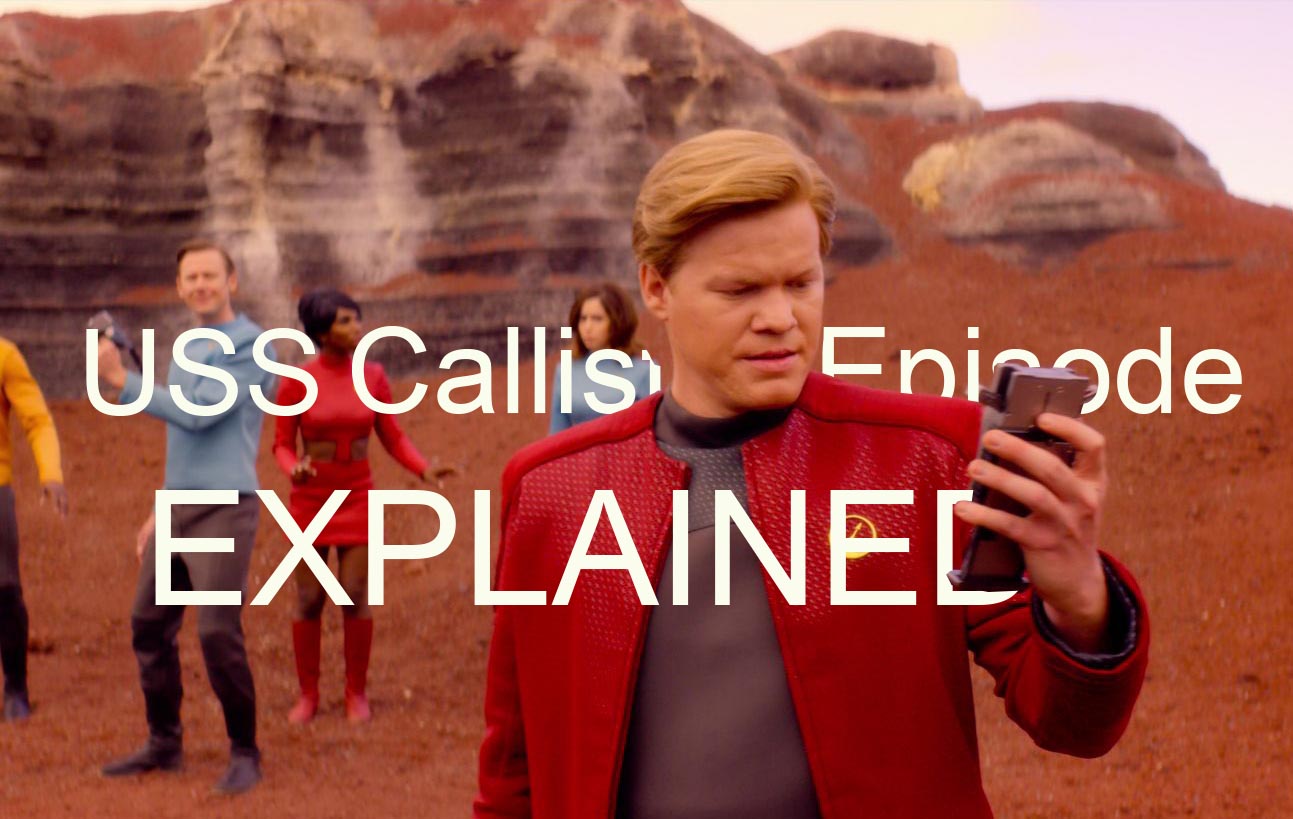 I don’t talk a lot about Black Mirror since it initially launched. I think I’ve handpicked a few here or there to chat about, but generally speaking I don’t make a huge thing out of the show anymore. But I just hopped on a plane and watched Season 4’s first episode, USS Callister and had a blast with it. So I figured I’d pitch you on the show, if you’ve never heard of it, the episode if you haven’t watched it.

What is a Black Mirror?

This is about as simple a pitch as they get. It is a Twilight Zone for the modern age. Simple enough? It’s a tech heavy, dark, British sort of vantage on the world around us today. It’s a sardonic and insightful vantage on this thing we call life today. Should we be so wrapped up in social media? What would happen if we took this X technology one step further? Or what about if we pushed the boundaries for what an “Art Installation” looked like? And how could we possibly make this go as poorly as possible? That’s Black Mirror. But if you ever once watched a single Twilight Zone and thought, oh clever… then this show is for you. But be careful, not all shows are equal. And whatever you do, don’t just start with episode one of season one. PUH-LEASE, don’t do that. Get my opinion first before you watch that one! hahaha. If there is any question at all, just start with ep2 of season 1. Thanks!

So that is Black Mirror. And you really should watch it, from beginning to end, because every show is worth a discussion… and some are brilliant.

And now? Now, I want to talk in detail about this episode. If you haven’t seen it – walk away from this tab… keep it safe, and loaded, but tab over that way —> and watch it first. K? Great thanks for that. I just don’t want to spoil it for you. Because that’s what is about to happen if you aren’t careful. And after watching all of the latest season, this is the one episode that has me still thinking. Sure, I dig the other ones too. And I’ll probably get around to talking through those too. But this one? This one has a special little je ne sais quoi that eludes description.

At a high level, the idea is simple, but the way the show plays it out is extraordinarily clever. Robert Daly is the under appreciated CTO of a start up (let me tell you a story or two about how unloved that position can be… but I digress) that has created an online game. From the feel of it, I think it is something of a Massive Multi-player Online type of a game (MMO)? Regardless, we don’t know because we never see it. And during the day, our trepid tech leader is beaten about the head and shoulders regularly by his employees and the President. As far as we can tell, he takes it somewhat in stride.

But in the evening, a whole different scene begins playing out. Robert spends his time playing his own custom version of the game. This particular game is walled off from the larger MMO ecosystem intentionally because Robert doesn’t anyone to know what he is doing here. What is he doing you ask? Well, so glad you asked… while at work, he is stealing DNA from his coworkers and then running that DNA through an “Assimilator” to create and import new game characters within his game. Truth be told? Our trepid tech expert Robert? Yeah, he is, in effect, stealing the souls of his co-workers in order to play out a role-playing game where he debases and embarrasses his co-workers. The fact that it is a fantasy Star Trek world is almost irrelevant. The fact that it isn’t sexual (per se) is also irrelevant.  It’s all about the characters in the game and his real world relationship with each one.

The Characters of USS Callister

Let’s talk quickly about the technology of Assimilation. (Which, in itself is a clever homage to Star Trek itself). Apparently Robert has designed a solution that not only steals the physical characteristics of another human; hair color, build, gender, eye color etc. But he’s also figured out how to steal the memories and mental capabilities of his co-workers through the swab process.

The physical trait stealing is already a thing. I’ve interviewed and chatted with Heather Dewey-Hagborg several different times about her “art” installations where she swabs trash in the street to then recreate that user’s face. So, this is a very very real thing. What we can’t do today is also recreate a human’s memories. Which is what makes this episode fascinating. Black Mirror is always on the cutting edge of technology and pushing the boundaries of what we can do today and what will be possible tomorrow.

So when these virtual co-workers drop into this new game their brains are a snapshot of what they were in that moment when they left the DNA on the cup. When a new character comes into the world, the other characters want to know if they’ve gotten that promotion they were hoping for. They want to know how they’ve progressed since arriving on the USS Callister. Its as if Robert has figured out to truly steal his co-workers without letting anyone know. It’s as if Robert has enslaved his coworkers, literally, and is forcing them to play his game.

The Escape From USS Callister

So the problem for these virtual characters is how to end this insanity. Either to wipe their characters and go dark. Or to escape from Robert’s personal hell zone where he’s free to order them around. Have you read the short story by Harlan Ellison, “I Have No Mouth and I Must Scream”? If you’d like to read it, I think this is a legit legal copy? If not, don’t sue me, just let me know and I’ll take it down! No harm no foul! hahah. Or better yet, buy it here.

But this idea of an evil AI that is capable of abusing AI beings without their having any ability to push back? Talk about horrifying. Well, that is what Robert has setup here. He has become the overlord to these AI slaves and they will do his bidding come hell or high water. But through a bit of cleverness, the AI employees communicate out to their real, physical selves, and threaten them with the release of knowledge only they would have (compromising photos in this case), in order to get them to act.

So Nanette, the new tech employee – and latest virtual abduction, breaks into Robert’s apartment and steals the DNA swabs he kept in the mini-fridge. That keeps Robert from reinserting them again after their escape. And simultaneously, the group of AI characters hacks their way out of Robert’s server when the latest patch update is being applied.

But What Did The USS Callister Ending Mean?

So the AI characters are now free to roam the servers at large, and interact with others. And immediately they come across another gamer that is wondering if they want to trade with him. And he is dismissive and rude to them. Why? I DONT UNDERSTAND! hahah. Well… if that ending of the episode 1 of season 4 of Black Mirror, USS Callister confused you, let me elucidate a bit for you. And it really won’t take me long.

Hahaha. Seriously. That’s really the beginning and end of that conversation. If you play online with other random people, the very first thing you’ll realize quickly is that online gamers are EXTRAORDINARILY rude on the whole. Seroiusly, this is not a gross over estimate, if anything, it’s a gross under estimation of the characters you might meet online. Buddies and I have been gaming once a week for years now. And sometimes we are required to get the help of 3 or 4 other people in order to accomplish some bigger task. And whenever we do, we buckle up for abuse, rudeness, and outright hostility. One time, fairly recently, we met this 12 year old that was actively trying to INVENT SWEAR WORDS to abuse me with. “Was that a good one?!? How about this one?” I kid you not. I literally had to go shower after that evening was over. I’ve told my son, under no circumstances is he to EVER play with random people online. EVER. It is unbelievable the level of hostility and vitriol that you will encounter.

So basically, the ending is simple. They’ve left Robert’s server successfully, but now they will need to navigate the larger universe of online gamer hostility. The End.

Do You Think Its About Data Security?

Do you think Black Mirror Season 4 Episode 1 is a diatribe about data? Is it a polemic discussing personal information, specifically your DNA, and what could happen if technology advances just a little bit further in this space? Is that the point of this episode? Like Heather Dewey-Harborg and her art experiments, do we think it’s cool for someone to just walk off with my DNA and do whatever they want with it? DNA rights?

Do You Think It’s About the Gaming State of the Union?

Maybe you are a gaming neophyte. And you had no idea that it was even possible to game online with tons of other people and play games like the USS Callister online? And you are just shocked at the rudeness and the advanced nature of gaming? And maybe you think this is all about reevaluating this new trend in our society for spending our freetime? Sort of like Ray Bradberry’s Parlor Walls in Farenheit 451… when we read about these massive screens that fill entire walls we all think about that and collectively say, man, that is excessive. Maybe that is how you feel about gaming today and that is what this episode is all about.

Do You Think It’s About Psychological Compensation?

But as for me – and pardon me while I get graphic a moment – but maybe that isn’t it at all. I personally believe that it is all about psychological compensation – and it’s all happening already, just in a different form. Your friendly co-worker is going home after work and playing video games, and blowing things up regularly in order to destress. I know, because I do it. Others, have issues with their mother, and so they pick stripes of prostitution and pornography that speak to that missing hole in their chest. Or maybe you have zero control in your love life, or marriage and so you compensate through Harlequin novels. But lacking control in certain areas of our lives we may act out in other ways to compensate. Fill in your own personal blank here. And for me, this is what I think the episode is all about. Think about it, this is what Robert is doing in this episode. Instead of confronting situations at work in a healthy way, talking to his co-workers about being slighted, Robert chose to berate their virtual identities instead. Right?

Or heck, maybe its all about all of the above. What do you think the USS Callister episode is trying to say?