An Inside Out Creature Flick and The Wildling Explained

A reader by the name of Moxie recently brought The Wildling to my attention via my movie recommendation page. Which, is a great way to bring movies to our collective consciousness (the hive mind and what have you… or something.) I hadn’t ever heard of it before, but the movie has a couple fairly popular actors, like Liv Tyler, which makes it all the more surprising that I hadn’t heard of it. But regardless, thanks Moxie for mentioning it.

If, you had never heard of it… The Wildling sort of turns the urban legend and horror story on its head. Or maybe more accurately, turns it inside out. I really don’t know how to tell you even a little bit about it without spoiling the entire movie. So why don’t I just throw this trailer in right here, and let the movie creators introduce you to it themselves:

So yeah, it’s that. But even after watching it twice, I’m not sure I would recommend it. Yes, it was different. And yes it was intriguing. But, yeah, why don’t you just decide on your own what you think. But regardless, from here on out, I plan to deep dive on the movie and discuss it in more detail. So spoilers will abound from here on out. Here be dragons!!

Deep dive on The Wildling Movie

As the Wildling kicks off, we get the distinct idea that all is not well in the world of The Wildling. There is a young girl, kept inside not matter what. Actually, the “father” who obviously cannot be the father, has electrified the doorknob to keep Anna from even touching the knob. And as the days progress, Anna yearns more and more for the outside world. And all the while she hears stories about the Wildlings from her father’s stories. Eventually, Anna begins getting shots to stop her periods from happening and keep her from growing up. And maybe because of the shots, or because of some other reason, Anna becomes very sick. So sick in fact that she asks her father to take her to the better place.

And with that, Anna’s ‘father’ commits suicide. And the sound of the gun sends the police to the house where they find Anna and the father. And as Anna starts to get better, she decides she’d like to live with the cop that found her (Liv Tyler). And there in the house with Ellen the Cop, is her brother Ray. And as Anna begins to settle into her life she starts to normalize to school and also within the family. One day though, while walking in the woods, she sees a deer and begins chasing it faster and faster. But just at the last second, the town loner – the one missing an eye and wearing wolf skins, grabs her and keeps her from getting hit by a trap.

Eventually, the DNA tests come back and Ellen tells Anna that Daddy wasn’t her father. Which should have shocked absolutely no one ever. And in the worst possible parenting choice ever, Ellen allows Anna to go with Ray to the town party. And from here on out the movie begins rocket sledding its way along. Ray and Anna kiss, but then something weird begins happening to Anna… her teeth begin falling out. And not wanting to be seen by Ray, she climbs her way out of a window and then out into the woods. The town drug dealer catches her and begins to rape her, but Anna flips out completely, and cuts his jugular vein, and he dies.

And not to belabor the continued description of the movie, we learn that there have been a society of men that have been hunting the local Wildlings for years now. And apparently, “Daddy”, who killed Anna’s mother, kept Anna secret from the rest of the men that had been hunting for her. He also worked hard to keep Anna from turning into a Wildling by forcing her period from starting. Well, apparently, Daddy didn’t kill himself. He only injured himself badly. And eventually he leaves the hospital and pulls everyone together that were responsible for hunting the wildlings.

Before anyone finds out that Anna killed the drug dealer, Ray and Anna make love. Which, is an important development, because now Anna is pregnant. And as she continues to turn, she also is beginning to show. And when Daddy finds her he tranquilizes her and then begins to cut the baby out of her. In what must be the strangest development in the history of all film. Obviously he is wanting to have another child to himself to lock away and keep for himself. Right? But at the last minute, our town weirdo, the one with the wolf skins and the bad eye?, shows up and kills Daddy, and saves Anna by stitching her up. 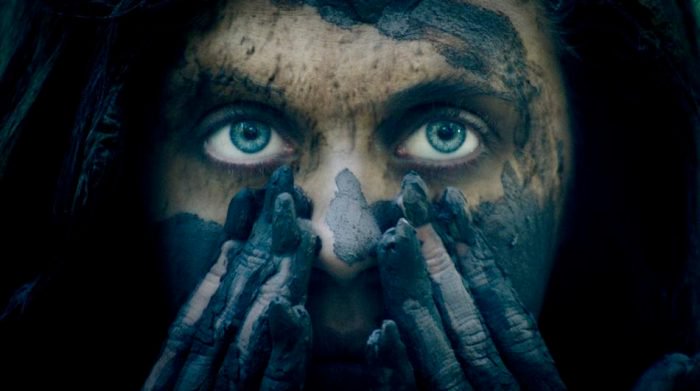 Thoughts on the Movie The Wildling

So, part way through this movie, and I am finding myself wondering why I am cheering for a beast that devours humans at will. I sort of stopped, and thought… what led to this moment where, here I am, wanting this Wildling thing to win? And then in my brain I flashed back to the opening scenes of a little girl that is trapped in a room, with an electrified doorknob and I realized… ah, that’s how it happened. But at about the 3/4 point of the movie, the inside out nature of the film just started to wear thin. The scaffolding couldn’t bear the accreted weight of the entire structure that had built up to that point. For example, Ellen? Is rooting for Anna from start to finish. Yes, sure, technically she put her in jail when her dress was found at the scene of the crime. But you are wondering, how is it that our one arbiter of truth and justice is defending this evil female werewolf.

Which, brings me to another question, what exactly is a Wildling? At the end of the film, when she is basically fully transformed, she seems to be a werewolf. Isn’t she? Fully hairy from top to bottom, and with fangs and claws. No? But I have never heard of a Wildling before. Is it actually a thing?

The most interesting bit about this movie is the way the film has attempted to view the plight of an evil creature from the inside out. Take the perspective of the creature. It was a good attempt, and I found it interesting how the film started with a history that we don’t see. And then moved from there to Anna growing up. Etc etc. But ultimately it just didn’t work for me. I didn’t care enough about her to root for her and her crazy. But it was a valiant attempt to try and run the movie inside out.