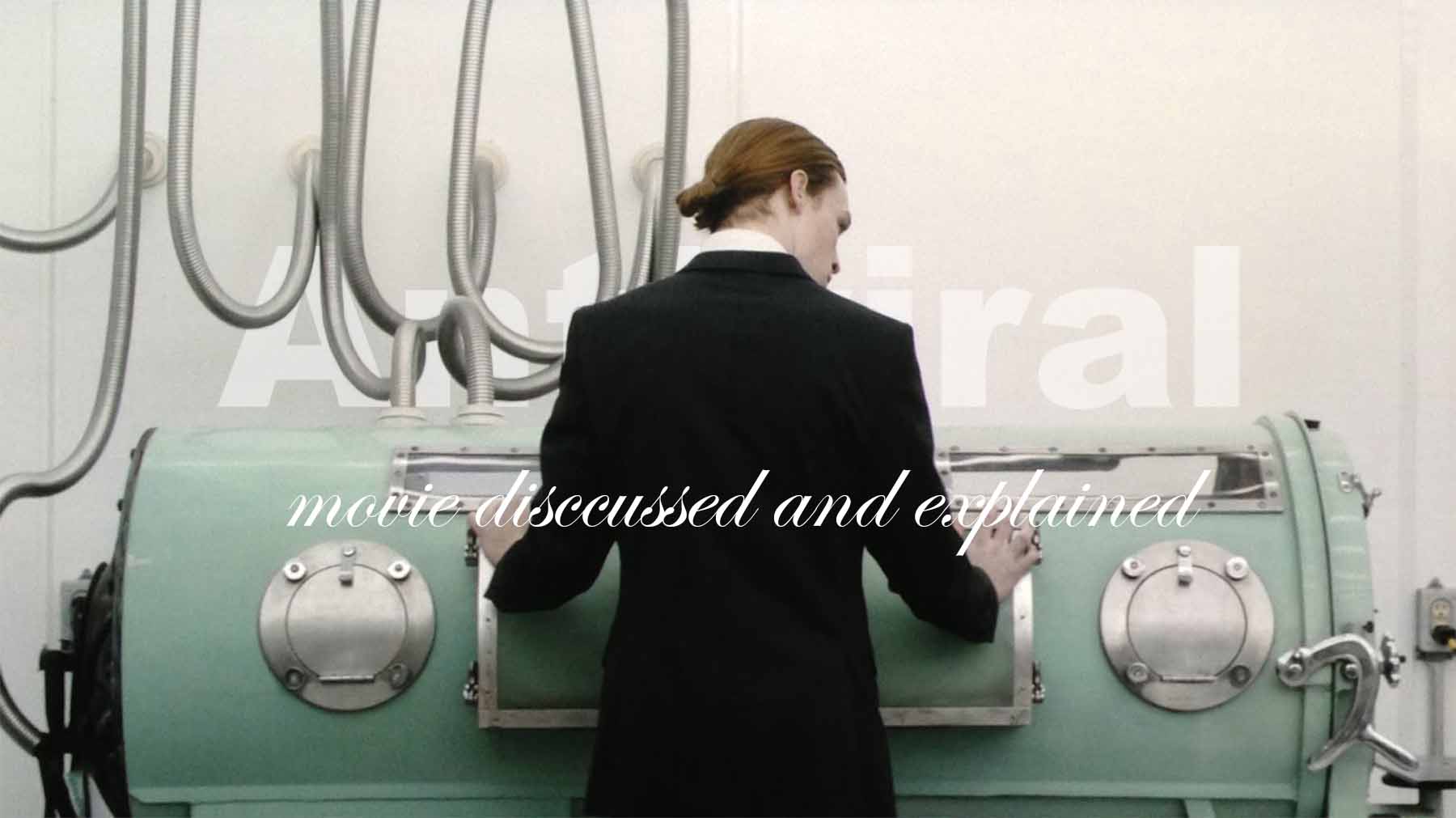 Someone Needs to Explain the Movie Antiviral Because Wow

Horror movies generally don’t do it for me. They generally aren’t scary. And they generally just annoy me. But there is a certain sort of thriller that can just undo me completely. I talked to you all about the chaos that blew my mine over in our discussion about the movie I Am The Pretty Thing That Lives In the House. It really takes a certain kind of special kind of scary to completely flip me out. And I will tell you what, internet denizens – this is a special kind of scary. Wow. But yeah! There’s a ton to talk about here too. Tons of crazy. Tons of stuff we do today that if we had to explain it to a citizen of 1600’s earth, they wouldn’t understand, like at all. Take for example, oh, I don’t know, selfies?

Anyway, this may not be my favorite movie of the year, but it will be in the top five movies that have a TON to say. So, why don’t we do a trailer, get rid of the interlopers that haven’t seen the movie yet – and start talking about this thing. Because wow. Wow. Woah.

OK. So yeah, trust me, this is a crazy movie. If crazy isn’t your thing, then you wandered into the wrong website. Here, why don’t you head on over to this website about Marvel’s End Game instead? (Ohhh, that’s going to offend a lot of people right there.) But yeah, this is a crazy movie for people that love crazy in their cinema.

Antiviral is a movie set in the near future, decidedly not far enough in the future, but the future none the less. And in this WEIRD future, people are absolutely obsessed with celebrities. I know, strange, right? Anyway, in this wild and crazy future, people are so infatuated and star struck with celebrities, that they – wait for it – purchase diseases and illnesses that have passed through famous people’s systems. Wait, what? The entirety of this movie is all about the trading, selling, and pirating of celebrity-viruses.

We meet Syd March (played by Caleb Landry Jones – better known for his role in Get Out) in the employ of the Lucas Clinic. Lucas is one of the foremost companies in the world that sell celebrity pathogens. Now, the Lucas Clinic has a non-compete agreement with one of the foremost celebrities in the world, Hannah Geist (Zeitgeist anyone? Anyone?) which allows them to sell her pathogens exclusively.

Now, we learn quickly that Syd, to earn extra cash on the sly, has been injecting himself with the illnesses, in order to transport them home. Where he then waits for the bug to manifest, extracts it from his system and distills it via his contraband console that is hidden behind a wall in his house. His console unit is able to break the copy protection of the virus. But it should be noted that once the virus is communicated to a customer, it become incommunicable. Why would you do that? Well, because when you are selling a thing, you don’t want people getting sick unintentionally, of course! And once he has the copied pathogen, he unloads the virus to a man named Arvid (Joe Pingue) at a meat market. A literal meat market that sells bio-engineered and reproduced celebrity meat. And yes, I just typed that sentence. Which is one of the reasons that I absolutely adore this movie. I regularly found myself saying, wait, WHAT?

Now, when Derek Lessing (played by Reid Morgan) – who was originally responsible for collecting samples from Hannah – is caught stealing viruses from the Lucas Clinic, and fired, Syd steps in to collect the latest Hannah illness. Immediately after getting the latest sample, Syd quickly injects himself in the hopes of distilling it and selling yet another product to Arvid. But when Syd attempts to remove the copyright protection, it breaks his console. Worse, the next day after he awakens from his fever-dreams of the latest illness, he finds out that Hannah Geist has died from this disease. Which, is fairly problematic for our “hero” in that he also has this illness that just killed Hannah.

Needing to fix his console, he and Arvid approach Levine, who happens to be the head of the piracy group through which these knock-off viruses are getting out to market. Levine offers to trade his replacement console parts for a swab of Syd’s blood. But when Syd refuses this barter, Levine just takes the blood anyway. Apparently with Hannah now dead, this latest virus is screaming off the shelf, and everyone wants to buy it. And yes, I just typed that sentence as well. But the pathogen isn’t available on the market legally from Lucas at all, now that the disease has killed Hannah. So the only distribution channel for the demand for this deadly disease is now going to have to come through a piracy channel. And the only supply for this virus is sitting, squarely, in Syd’s body.

And in a brilliant turn of events, Syd, in his über sick state, is picked up by two guys who haul him to a house in the woods. Where, he actually finds out that Hannah is actually not dead. Surprise!! But why did they fabricate this story of her death? Was it to protect Hannah, or was it to spike the value of the disease they were trying to sell? Regardless, it’s here that we learn that this particular pathogen was engineered to prevent analysis and stealing of the virus. Which, is how Syd’s console was destroyed. So when Syd begins chasing down the virus in order to finally figure out why all of this was happen, the trail leads him to Derek who sold it to Lucas’ rival clinic, Vole & Tesser. And it was Vole & Tesser that patented the disease before it ever was sent into Hannah’s system, thus doing an end around on the exclusivity agreement that Hannah had with Lucas, etc.

Levine, in a burst of brilliance, abducts Syd in order to televise his death since no one was able to watch her die originally. (What with her being alive and all.) But Syd stabs Levine in the face with a syringe and runs for it. Realizing Vole & Tesser is the place to be, he negotiates a deal to come on board and helps them build a cell garden out of Hannah’s body which will allow them to sell an endless supply of Hannah infected diseases. Oh, and by the way, Syd sucks on Hannah’s arm revealing his true pathology.

Antiviral Movie What the Heck?

This movie was presented as a neo-noir thriller all dressed in whites and ruby blood reds, but it was actually a social commentary comedy. Or, if you prefer, a social commentary horror. You say potAHto I say potEHto. But it really isn’t a thriller about intellectual property. It’s actually a discussion about our sick fascination with celebrity. There was a particularly fascinating scene discussing celebrity jammed into the middle of this movie that went a little something like this:

“What do you say to critics that say the disease you are really selling is a cultural one?”

“If celebrities are famous, they deserve to be famous. Celebrities aren’t people – they are group hallucinations.”

And with that, we get the entire point of this movie. It’s all about the insanity of the celebrity cerebral induced group hallucinations. And is there a better definition of a celerity than a mass induced hallucination? It really doesn’t make sense at all. It’s as if we’ve elevated the cool kids table in high school to a global level, which causes such enormous inherent centripetal force that they are vaulted into the social stratosphere. I mean, I’m not above that, look at my interview with Eric Heisserer the other day? I was all kinds of fan-boying it. So I’m not knocking it – but it is strange when you step back and think about it.

Today we collect and sell their signatures. We clamor for their things. There are auctions where we buy their things, their hair, and buy moments with them.

Brandon Cronenberg has said that the idea that germinated (see what I did there? Come on.) into the larger full blown scrip was a viral infection he once had. He stated in an interview that the “central idea came to him in a fever dream during a bout of illness, I was delirious and was obsessing over the physicality of illness, the fact that there was something in my body and in my cells that had come from someone else’s body, and I started to think there was a weird intimacy to that connection. And afterwards I tried to think of a character who would see a disease that way and I thought: a celebrity-obsessed fan. Celebrity culture is completely bodily obsessed – who has the most cellulite, who has fungus feet? Celebrity culture completely fetishizes the body and so I thought the film should also fetishize the body – in a very grotesque way.”

And so the movie productizes literally everything. Hannah was in a movie, we sell the movie. Hannah posted Instagram posts of her latest shoes, so we sell the shoes. Hannah visits the island get away, so we sell the Hannah vacation package. Best yet? Hannah has the flu, you can too… and not just any flu… but literally, the Hannah Geist FluTM!! It’s a once in a life time opportunity. And actually, it’s worse than that. It isn’t just the monetizing of humans (their viruses, their skin, their meat) but it’s also sexualizing even the most trivial of things about the individual person. As Cronenberg said, it’s the fetishization of everything about them. Deeply dark, and deeply disturbing. Dark like the paparazzi taking photos up a star’s dress. Dark, like a paparazzi climbing a tree to photo into the Royal Family’s windows. We are already partially here in this dark world of celebrity-fetishization.

But doesn’t this movie do that itself? Doesn’t it double back on itself eventually. It satirizes the way we live, and in its laughter, fetishizes the actors it seeks to legitimize? Hannah herself is a sexualized icon, glistening and immortal. (If you wondered who might be playing the role of Hannah Geist, it is none other than Sarah Gadon. I know, right?! OK, so she isn’t a huge actress, but she did play across Jake Gyllenhaal in Enemy… possibly one of THE most inexplicable, and thoroughly confusing movies of all time. Which, she in turn, could be sexualized and emblazoned across the internet for. Sort of an art imitates life imitates art turn.)

Final Thoughts on the Movie Antiviral

Ultimately this movie is more about zeitgeist of our world today, than it is about some fictionalized future. It shines a light on our preoccupation on celebrity and its resulting industries. It pokes a finger in the eye of the fans, and the paparazzi that are so hellbent on profiting from this cottage industry. It laughs at the hangers on, and the celebrity copyrights at large. Not a thing you say? Remember when Leonardo DiCaprio trademarked his name? No? Regardless, we are a society fascinated with the fascination of fame. We venerate the venerateless. And genuflect to the ungenuflectable. While not realizing that what we are doing should really be certifiably insane.