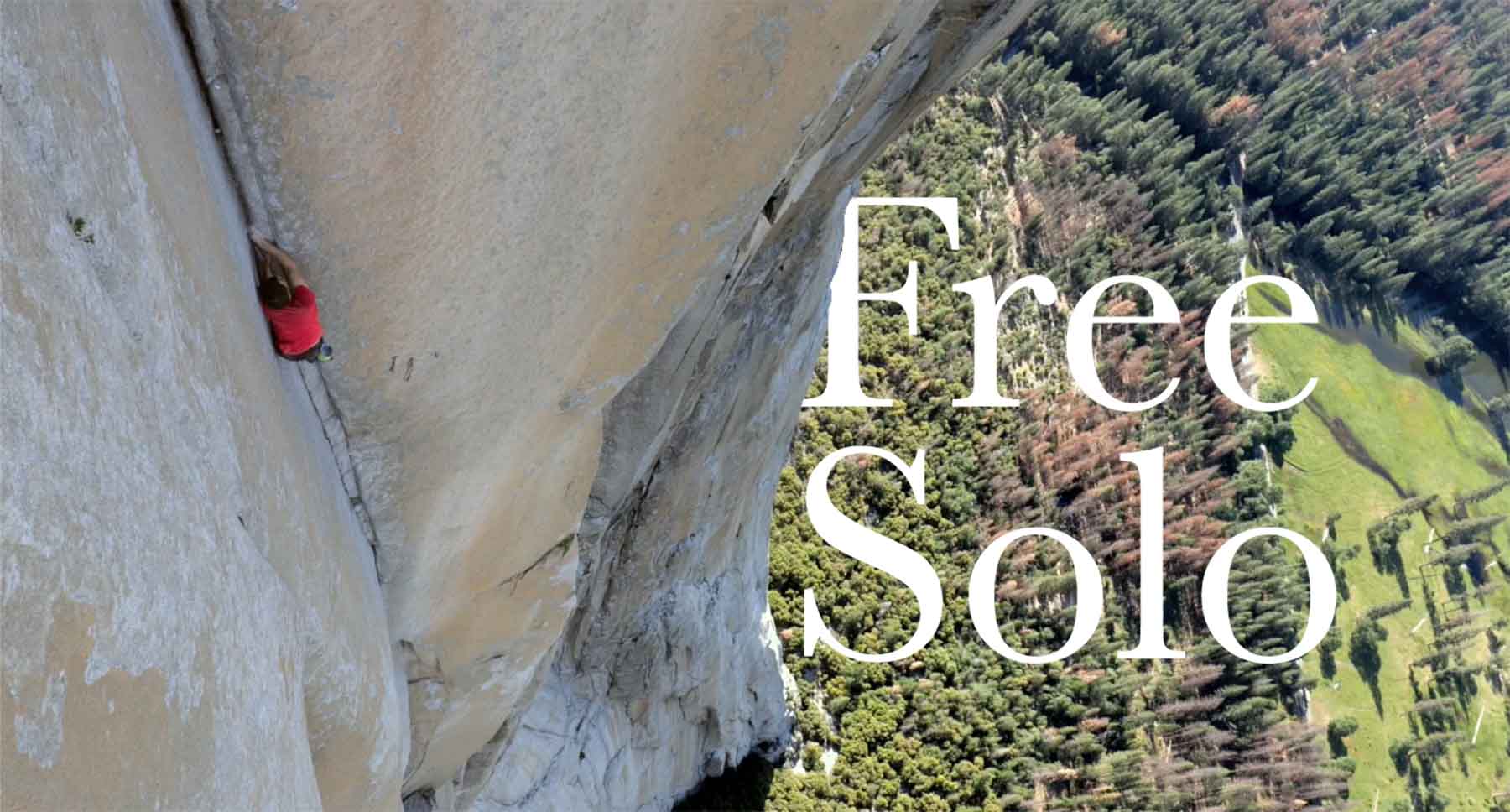 The Movie Free Solo is the Scariest Thriller Ever

I almost passed up talking about this Free Solo. Not because it wasn’t good – it’s otherworldly good. It’s nearly a perfect movie. But I almost skipped on it because I assumed it was so good that everyone had already heard of it… and that everyone had already seen it. But it was only after the fifth or sixth person I mentioned the movie to said something along the lines of, “New Star Wars movie? What is it?,” that I decided this was just stupid. I guess a public service announcement talking to the THiNC. readers about Free Solo needs to happen.

But what is there to say? The story is so utterly simple. A man, (is he really just a man?) named Alex Honnold, climbs El Capitan free solo – that is, without ropes or help of any sort whatsoever. That’s it. So obviously, it’s not worth talking about on a site that heralds movies that encourages conversation and debate. He went up the rock. What else is there? But trust me, there is a lot to talk about in this Alex character. A lot.

I can’t even watch that trailer again without hyperventilating, the movie itself is the stuff of nightmares for those of us who are even marginally aware of the enormous, overwhelming, and insatiable power that gravity has on us all.

What is Free Solo All About?

It would seem that this question would be entirely redundant. Well, Free Solo is about Honnold’s attempt to conquer El Capitan, without ropes, or any sort of protection. We’ve covered this. And yet, while that is what the movie is about on the surface, there are numerous underlying conversations that are more what the movie is about than Alex’s climbing attempts.

We learn about how Alex progressed through some of the most difficult and amazing free climbs in the world. And all the while, kept his eye on one big, daunting climb…and that was El Capitan. We watch as Alex goes from tentativeness to full-on monster desire to tackle that particular wall. And all the while, he is beginning a relationship as he is simultaneously navigating the dangerous minefield that free soloing means for his life. Oh, and by the way, how does one film such an attempt while not impacting the climber? These are the three main things this movie is about. The Climb. The Girl. And safety. And yet, the film isn’t about any of these things.

After I watched this movie for the first time, my dreams (nightmares?) were littered with psychic trauma from having witnessed this mortal narrowly defeat death, this time. The truly amazing thing for me was how Honnold made a run at the granite vertical face in 2017, and stopped. He didn’t like one spot where he was required to put all of his faith in one precarious foot hold. And not liking this setup, he aborted the attempt for the season. To consider how small these holds were just utterly blew my mind. To consider that a pencils width of rock for one foot placement was all that was between Alex and a catastrophic end just seems to beg to ask the painfully obvious question, why? At which point, the obvious follow up is decidedly, why not?

The Meaning of Life and Everything

Alex is right, people die every single day. And they die in stupid, minute ways…as well as enormously crazy big ways. Today alone, over 50,000 people on the planet will die from heart issues and strokes. Heck, 4 or 5 thousand people will die today on planet earth just commuting about. So the real question should be, why do we intentionally get in our cars? I mean, this is obviously a preventable opportunity to die. But to characterize free soloing as a danger on par with commuting is laughable. You get the point though. We die every day. Something like 200,000 people will die today, unfortunately.

I am not certain what I would do if my favorite hobby increased my likelihood of dying by like a 1,000%. It’s really not comprehensible. I don’t know where I would begin to weigh those costs and balances. For example, I love sketching. I am generally sketching something all the time. Here, here is the sketch I’m fiddling with right now.

And while I’m not any good, if you were to tell me if I were to continue drawing, actuarially, that it would decrease my life expectancy dramatically, I’d probably keep drawing regardless. Which, probably doesn’t make a lot of sense. Even more significantly is that after watching an on-camera MRI, we learned that Honnold’s brain isn’t really excited about anything that normally humans find exciting. So, in order to even hit his excitement meter, he requires vastly larger stimulants than you or I do. So, while my drawing analogy is cute, it isn’t really even relevant. (Though, if pressed, I would make the case that I find drawing extraordinarily stimulating.)

All of this begs the question. What is life about? What is the purpose of this life that we are living right now? If this is one big accident, then maybe it doesn’t really matter whether or not our hobbies kill us in our twenties. If you believe this life is for a bigger purpose, and that we are here for a reason, then maybe wasting it on a drawing accident isn’t the greatest idea in the world you have ever had. But, the larger question here is are you ready to die today? Not to run this into the religious ground…but that is the larger question isn’t it? Whether you believe in God or not. Is your epistemological framework sturdy enough to handle this particular cosmic dice throw? But I don’t climb El Capitans! Yes, but you ride in a car each day. And it’s hit or miss on whether you get cancer today, or die of a heart attack. So you are throwing those dice each day, whether you are intending to or not. No offense. (That’s not true, I am actively trying to offend you.)

Back to the Movie

As far as movies go though, I really enjoyed this particular film. The fact that the movie took years of planning and execution in order to capture this singular moment in climbing history. The existential crises that pervade the crew as they watch their close friend do something so utterly insane as to even make the videographers turn away from their lenses. It was a riveting movie. And it was all the better for the fact that it allowed us to watch someone unabashedly following their dreams in spite of the consequences.