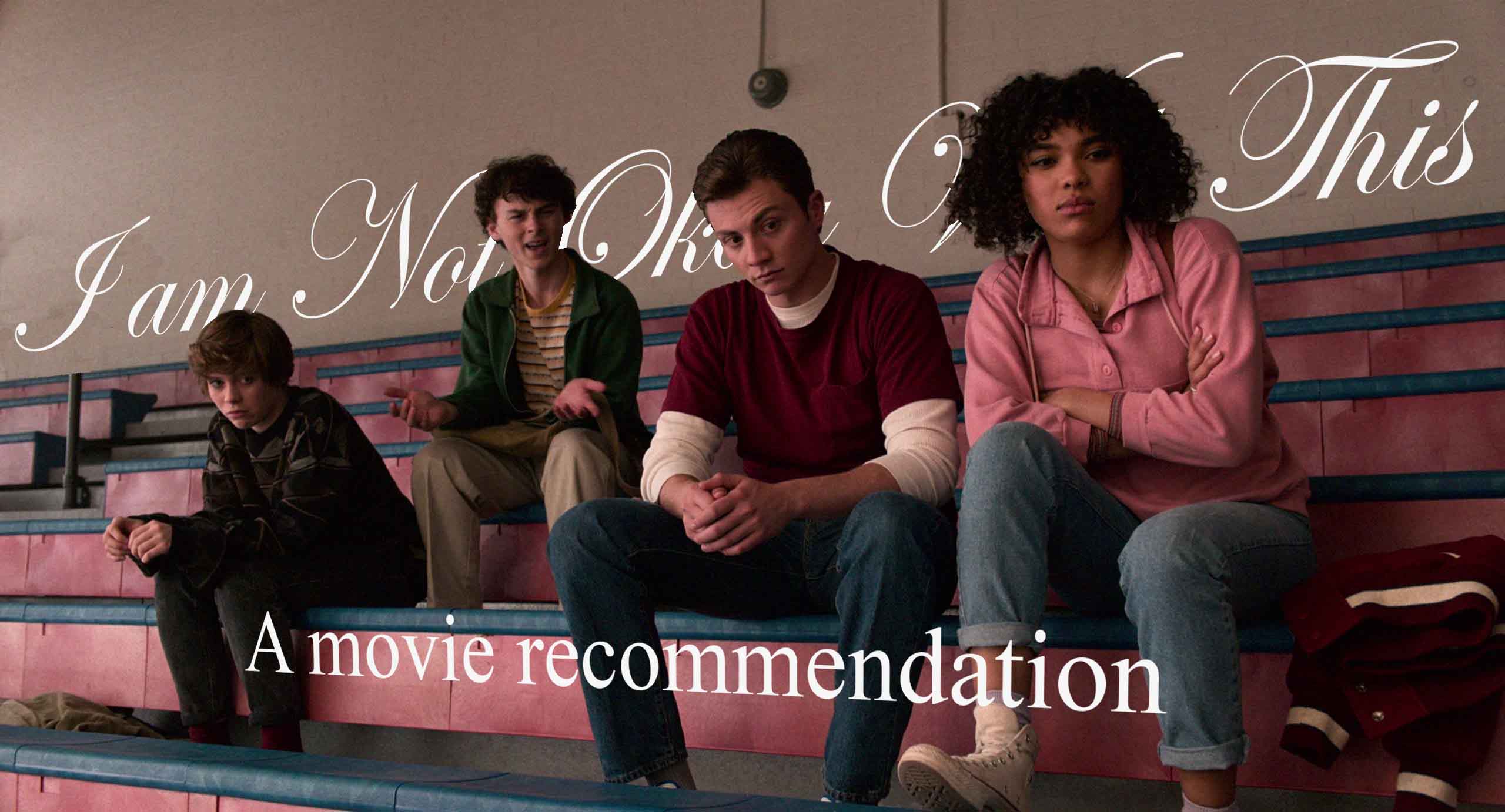 Netflix’s I Am Not Okay With This Recommendation

Taylor Holmes
cinema
March 2, 2020
Netflix's I Am Not Okay With This is what all superhero movies ought to strive to be. Heartfelt, compassionate, intimate, and filled with the angst of life that happens to anyone.
Screenplay
Acting
Direction
Action
Reader Rating0 Votes
4.3

Netflix’s I Am Not Okay With This Recommendation. Hrmm. This is going to take a little bit of an explanation. After all, I am actively, and diligently, 100% avoiding TV series shows. Like, so much so that when you guys bring me one you are instantly at a negative score even before you say anything else. Maybe a negative hundred and fifty. And then, maybe, just maybe, the show is so, so, so cool that you’ll turn the corner and barely dig your way back to zero. But when I have a metric crap-ton of films that you guys recommend to me over at https://taylorholmes.com/questions, it’s really difficult for your cool new show to get my attention. Scanning back through my email, and the questions, I see at least five series from you guys in just the last few weeks alone that I have actively ignored. And here I am recommending a Netflix series to you? This explanation better be really, really good. And trust me, it is.

Well, it was late. I had just come back from a Daddy/Daughter dinner dance. I’m wiped tired. But I can’t sleep. So I flip open Netflix, and start watching some scary show about pandemics and hyper-virulent influenza’s. But it was more about how extraordinarily unprepared we are! Visits to Vietnam, Kansas, New York, etc. – and just how inadequately ready we are. Yeah. I had to stop. (If you are interested, you can find it here.) But then I flipped open I Am Not Okay With This, got sucked in and couldn’t stop. But in my defense, I LITERALLY THOUGHT IT WAS A MOVIE!! And in my defense, it really is just a movie. (Wait, this is his excuse? Seriously?) No listen!

There are seven episodes. Right? Hardly any at all. Better yet? Each episode is only 25 minutes! IF! Deduct the credits and we are at 22 minutes. Twenty two times 7 is what? 154 minutes! That’s not even Dances With Wolves long!! What the heck! It’s two minutes shorter than Revenant! So yeah, I’m recommending that you guys watch the MOVIE “I Am Not OK With This”. And no one is going to dissuade me otherwise.

Gah, that is the longest intro ever. Here, have a trailer:

And to be clear – I’m a huge huge detractor of the current “super hero” bandwagon that Hollywood is on right now. All of the Disney owned Marvel properties could simultaneously-and-instantaneously combust and I wouldn’t bat an eyelash. I might even spontaneously giggle. But movies like this? Real characters? With real problems? Cares? Fears? Concerns? Yes. For that, I will be in every time. And that is what we have here – a character driven drama that happens to have super powers.

If I were forced to characterize this uncharacterizable film (I’m done calling it a series) I would say that this is The Breakfast Club with super powers. And if that isn’t the coolest elevator pitch for a film…I literally have nothing for you. I Am Not Okay With This is so retro, and so flashback café, that it’s actually hard to tell whether or not the film is actually set in the 80’s. The set design, the outfits, everything is swirled into an 80’s glaze, with a side of retro-pastiche. Which I espouse is a gloriously good thing. As is the return of the cliques, of the jocks, and the in-crowd parties. It’s as if movies weren’t allowed to call a spade a spade for over twenty years. Or maybe the 80’s Brat Pack of Molly Ringwald, Judd Nelson, Ally Sheedy, Anthony Michael Hall, Andrew McCarthy, etc., etc. burnt the clique stories out? No idea. But I will say that Sophia Lillis as Sydney Novak did a solid job of single-handedly making them cool again. But it was Wyat Oleff’s turn as Stanley Barber that had me falling in love with this show. His riff on the Shakespearean-ness of the bright lights of the Friday night football game was a thing of beauty. (If someone can point me to the episode that was in, I’ll happy quote it for you. But alas/alack, I am incapable of finding it. Ooooh. Nevermind, I found it, thanks for your assistance anyway. It’s in Ep2.)

At the football game, sitting far away from the bleachers, looking on:

Sydney “I’m surprised you even come to this stuff. It’s so lame.”

Stanley “It’s the opposite of lame, Syd. It’s theater, live theater. What could be more tragic? More Shakespearean? Think about it. The moment the lights come up on Hamlet, you know it’s not gonna end well. Take, uh…Mr. Bradley Lewis. His best case scenario is, what, managing some regional insurance sales company? Where he gets to, I don’t know, call the shots on Employee of the Month? I mean, these are the people that will actually attend the five, ten, 20-year reunion, because, aside from this, nothing else all that noteworthy is gonna happen. This is as good as it gets for them. And I like watching them like Hamlet, when everything goes to shit in the end and everyone dies.”

This quote literally had me both agog, and in stitches simultaneously. I once got a phone call from my High School’s reunion committee, asking if I was planning on attending my ten-year reunion. The phone conversation went something like this:

Voice on phone “Mr. Holmes, I’m calling to ask if you are planning to attend our ten-year anniversary? We are selling tickets now, and we are trying to get an idea as to numbers.”

Me “Uh, no, probably not, I’m not anywhere near there anymore. Wait, when is it?”

Voice on phone “Such and so dates, and such and so times.”

Me “Oh? Really? What a fluke. I actually am going to be in town then. So funny.”

Voice on phone “Why is that funny?”

Me “Because I’ll be in town and still won’t be going to my ten-year reunion.”

Voice on phone “Oh. OK. But wait…can I ask you a question?

Voice on phone “Who are you?”

Me “I’m Taylor Holmes…I did change my name though. Taylor is my middle name. I used to go by X back then. Is that the problem?”

Voice on phone “No. That isn’t the problem. I’ve looked through all four of our yearbooks, and there isn’t a single photo of you in them anywhere. Not in the official student photos. Not in the club photos, nothing. But it shows that you were in a ton of clubs. You are on the graduation list… everything. You were there, but you weren’t there.”

Me “Ah. hahahah. Yeah. I made a game out of avoiding all the class photographers. The formal student photos were easy. The Friday night football games were much harder.”

Me “Hahaha, yeah, I guess I did. Didn’t think anyone would notice.”

I was such a complete and utter dork. So when I say I get this movie, I literally mean, I get this movie. So check this movie out, and tell me what you think of it? And when you love it…I expect absolution from you in the comments for bringing you guys a series. OK? At least this one time?