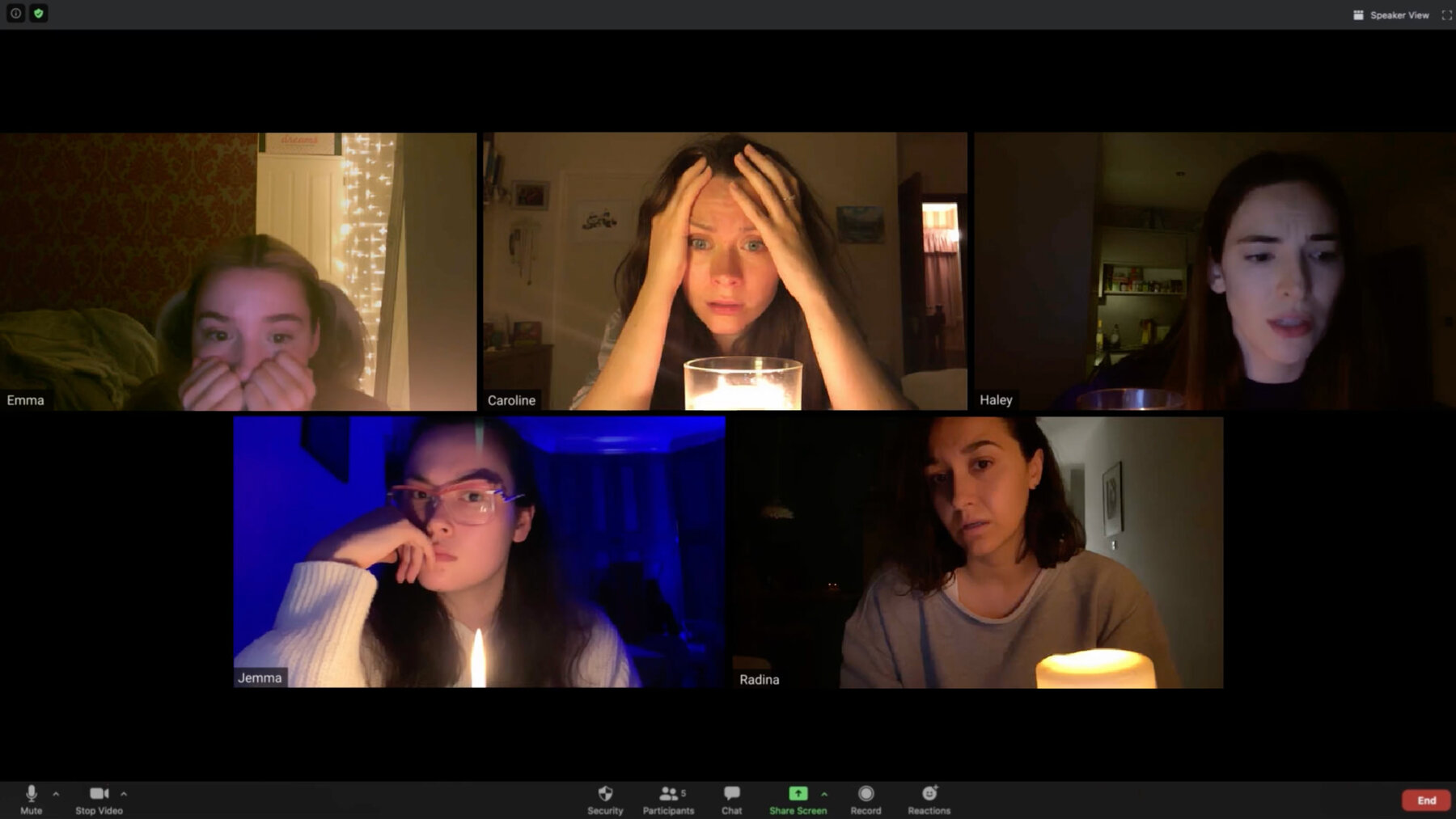 Taylor Holmes
cinema
August 6, 2020
The Host Movie is Pure Horror Concentrate - and why you should invite your friends to watch it with you, like, you know, in a zoom meeting? Get it?
Action
Acting
Screenplay
Editing
Special Effects
Reader Rating0 Votes
4.6

I’m not originally a horror movie fan. I sort of get to giggling when I think about the poor actor doused in fake blood and ephemera. I just can’t really take it seriously. But, you guys, in the past few years, have introduced me to a whole new level of horror madness that just blew my mind. Who knew that horror films didn’t need to be mindless slaughter fests? Huh? OK. There are horror movies that deal with guilt and past angst – like The Ritual. Or they can deal with traumatic family ailments and disabilities, like the movie Relic. Family cultist residual impacts and trauma, like the movie The Lodge. Maybe they even deal with the family trauma of mass murders, like the film We Have to Talk About Kevin. Heck, there are even horror movies about the madness of our suburban cul-de-sacs! (Vivarium anyone?) But today, I bring you literally, and unhyperbolically, the world’s most perfect raw horror film in the movie Host. This thing is maybe 60-minutes long wet…and just the raw number of jump scares, and horror-filled moments destroy any other movie I’ve ever seen. So let’s do this, shall we? The Host Movie is Pure Horror Concentrate.

If you haven’t heard of this movie… it’s entitled HOST (not The Host, or whatever, just Host.) And literally, this movie is a movie for our times. It was the inceived 12 weeks ago. Written. Acted remotely. Edited. And distributed in less than 12 weeks. If this fact doesn’t just shatter your brain, you know nothing about film making. And since I heard about it a month ago, I’ve been dying to see it. Here, here is the video idea that germinated into the full Host movie:

So Host has been out about 5 days, and I’ve only just watched it. “Why’d you wait so long to see it??! I thought you were fan-boying over it!” I hear you yelling from the cheap seats. Well, intrepid heckler, that’s a great question. I waited because I had the idea it would be a epic awesomeness to invite a pile of friends to watch the film together over Zoom, while quarantined. Do you get it? Oh, of course you don’t. I’m an idiot. That is ironic…and meta… because the film was a found footage film shot inside of a Zoom meeting. See now? So here’s a photo of me, in my basement, with the lights out, movie on top, my Zoom meeting on the bottom:

If you are doubting this is authentic – I promise you that you can see for yourself it’s authentic. If you zoom into the chat on right side of that screen, here is what you should be able to read:

(offscreen – for context) – “What the hell is she even saying?” (In reference to Seylan’s pronunciation of the word “Spirit.”

Jonathan – “Ahhhh spiggots [sic] now I get it.”

Tony – “Tay, next time we need a medium with a cool accent.”

I actually don’t know why I care whether or not you think this photo is authentic or not. Anyway. Anyway, it was a blast last night. So much so, that I am seriously considering doing a monthly horror movie screening with my friends over Zoom. But wouldn’t it be cool … HOLD NEW IDEA INBOUND… wouldn’t it be cool if we did a THiNC. meetup/movie watch over Zoom? We could do The Prestige, or Coherence, or some such well trod film… one we don’t really have to watch to know what’s going on. Comment below if you think that might be fun. Alright, I need to eventually start talking about this brilliant little film daaannnggggit.

Now, if you’ve never heard of the film – dude, pull your head out of the sand. You can find it over on shudder – you can sign up for a 7-day free trial that is totally worth the hassle. Mandy is out there too. They have a ton of great films worth checking out. And while I won’t be doing a walk through of Host this time…still, as always, I would still probably assume that there’ll be spoilers galore from here on out.

Host walks, no trods, no, it stomps, it’s way through the ghost/horror/genre. You know the kind of film I’m talking about. It’s probably most like the Japanese Ringu? Or even the American The Ring. Bad spirits are invited in through someone who isn’t taking it all seriously enough. And the rest of the movie is us watching as they try and close Pandora’s Box and survive the night. Right?

But where Rob Savage and his Host team take a hard right turn is that they take the found footage genre deep into the 2020’s pandemic. Now, I don’t know about you, but I spend half of my days on Zoom these days. Zoom, Facetime, Teams, and the like. So, when this movie kicks off it is 100% authentic when we watch as the friends mess with the audio that is reverbing between two devices. We watch as the attendees joke about their video backgrounds they’ve created of themselves. This is my life now… heck, I’ve created about a dozen AT-AT Star Wars blue screen backdrops for people. So all of that feels really really familiar. But when Seylan, the medium, conductor for the evening arrives…that is when we bump off the well-trodden 2020 dumpster fire path, and onto a whole new level of crazy.

As I said, I am generally not going to walk us through the film…but these movies are premised on one simple fact…and that is that the people in the film are inviting the evil in. Literally, they have invited the demons, the spirits, across their threshold. It’s a general Hollywood understanding that is well-played in all movies like this. Take for example Ripley and the crew in the Alien movies. Someone, out of corporate greed, has invited the evil into their lives willingly. Invited them across their space station threshold. And from there on in, the evil is allowed to do whatever it wants. Now, practically speaking, demons don’t need your permission. But it is an interesting bit of lore that remains true even in this modern Zoom rendition of a seance.

The other thing I wanted to mention was, and I think I said this already, but it bears repeating. Dude, this movie, it was just an idea in someone’s head a few months ago. The special effects? SUPERB! The tricks!? Sooooper cool. Like, for example, there was a moment when Zoom was supposed to have seen a spirit, and placed one of those fake clown masks on it. Scariest thing I’ve ever seen in my life. Or that moment when one of the characters gets picked up and hanged, then dropped into a swimming pool? WHAT? How? I mean, many of them were simple parlor tricks. But many were really baffling. So very good. And in just a couple months too.

This really does bode well for the indie film community when someone can go from idea to distributed finished film in just a few months. Egalitarianism within the world of film is a huge dream of mine. Drop the walls of entry, the cost of playing, and the lines queuing around the block keeping clever individuals from getting into the party. Too often Hollywood distribution warehouses are just abattoirs designed to eviscerate a decent idea, and farm it out for parts and sequels. But I promise you this, Rob Savage and his crew, if given the keys to the car, will give us new and different rides as they attempt to turn the movie going experience upside down. And I promise you this, I’d rather watch a throw away idea of Savage’s than Hollywood’s latest tent-pole.

I think it’s funny how many of my friends are too scared of this fun little movie. True, it is horror concentrate personified with just one horrific event after another. But once I figured out that this thing was going to just hit the gas, and not let up, until they were completely done with us, just made it all the more fun. The 60-minute run time felt perfect. The acting was so genuine, and the Zoom meeting details were so spot on that I regularly attempted to click on the movie to chat with the people I was watching it with! I really do think this is the movie of the year, and I know that Tenet is still coming (maybe?), I seriously have just called it. Host is the 2020 Movie of the yexdxd cx xsxdsxszzas fdfd.