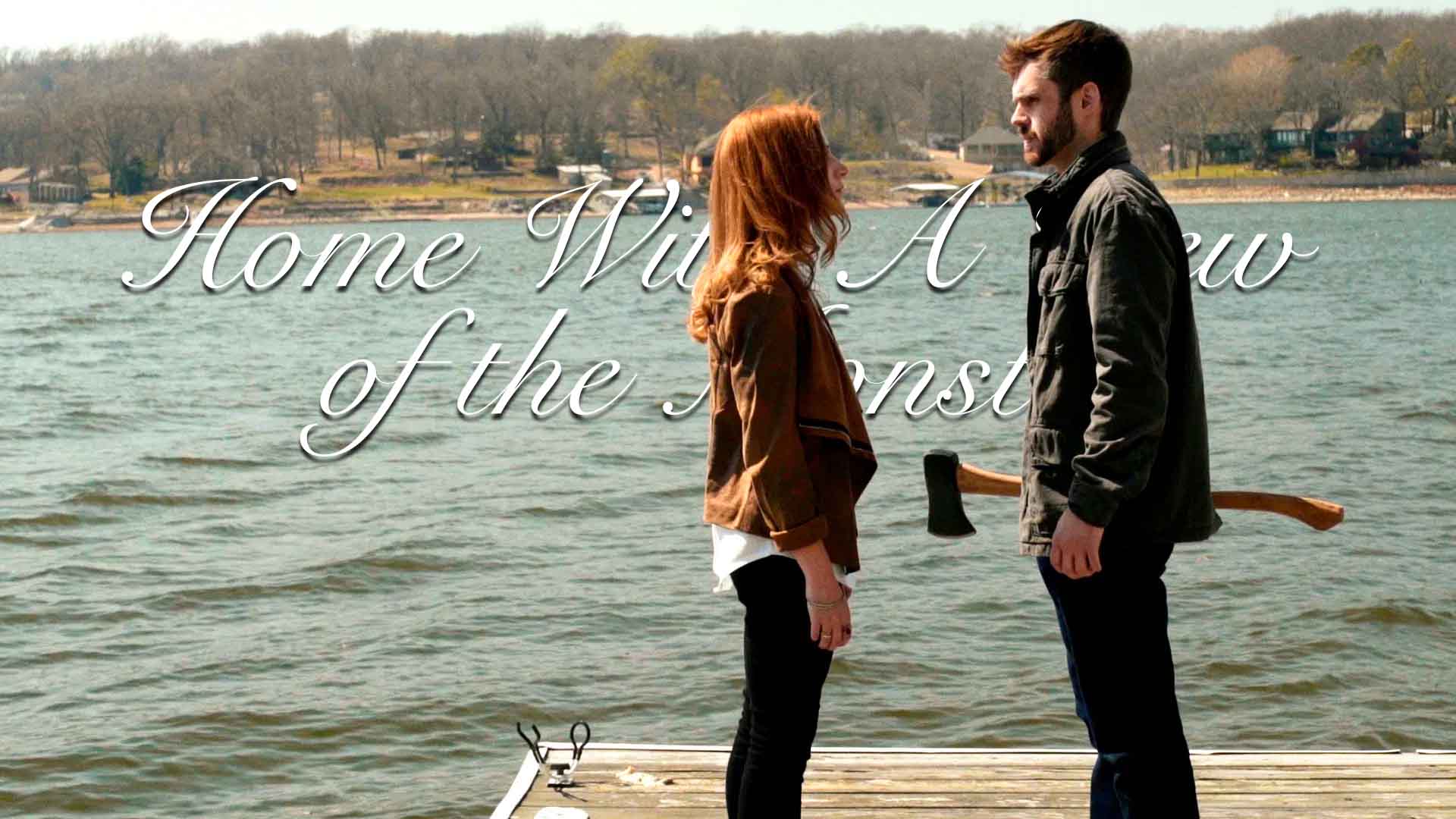 Home With A View of the Monster Explanation

Today’s movie comes from Alexis, who reached out to me with a cry for help. hahah. No, seriously she did. Basically she said, “I feel so absolutely ridiculous that for the life of me I cannot figure out what’s going on in Home with a View of the Monster.  I just can’t….” Literally, that was the entirety of her email. It was like a message in the bottle that hit me in the head, out of the blue, that said, ‘SAVE ME – STRANDED ON DESERT ISLAND – SEND TACOS!’ And I figured… what the heck. How bad could it be??!? I’ll swing by Taco Bell, snag a six pack of tacos, and be back by mid-afternoon. Yeah, cause, that’s how these things go, for sure. I was literally mid-write up on Of Body and Soul, when, RECORD SCRATCH, here comes Alexis’ distressing request for a Home With A View of the Monster Explanation. But hey, what am I here for if not to help you guys out? So, let’s go find out what this crazy movie is all about together, shall we? And maybe have a few tacos together as we go. As always, don’t proceed without watching the film first… I just do spoilers… 100% spoilers, and afterwards a deep dive to see if we can’t understand what might actually be going on here.

The ending is going to make your head explode. But it’s OK, we got this. We’ll take it nice and slow so that everyone that is confused on the ending of this movie will totally get this one. First though, you have to watch the film. And you can do that right here.

Quick House With A View of the Monster Walkthrough

Before we start on this one – the key to understanding this movie is that the story is told non-linearly. Yes, you say you “understand” that. Do you really though? Keep it in mind as we go, we start in the middle, jump backwards to the real beginning, then past the intro/middle, and back again… we see-saw back and forth all throughout the film. This detail becomes incredibly important especially at the end. Without keeping that in mind, this ending, and the entirety of the movie is completely impossible to understand. And to solve much of the chaos of the editing back and forth, I’ll walk through the movie in linear fashion… from a chronological timeline perspective.

OK, so let’s start. Our story starts with a fair prince named Chance (played by Jasper Hammer) and a princess named Kate (played by Danielle Evon Ploeger). Now, Kate and Chance have a bit of a weird relationship. They hang out a bit. Don’t really know each other well. But they’ve arranged to get together. Unbeknownst to Kate, Chance has been in contact with Kate’s grandmother. And she is fed up with Kate. So fed up, that she wants her dead. And that she’d like Chance to do it, and make that it should look like an accident. A drug overdose, of course.

The prince and princess meet up at the airport, and head out towards the hotel. But Kate has changed things up, and decided that instead of a hotel, they should crash at a VRBO rental instead. Weird change, but okay. Chance goes along with the plan. Now, unwittingly, the prince and the princess have, accidentally, rented a home that is owned by Rita (played by Ellen Humphreys) & Dennis (played by Sébastien Charmant). They purchased this glorious house, with the glorious view for peanuts. Why? Because it’s haunted. And this haunted house is destroying them mentally, and their marriage specifically. When watching the film, it’s difficult to understand what is bothering the two of them. But chronologically, we know that it’s this bargain basement house that they’ve purchased that is trashing them psychologically. They’ve even gone so far as to bring out Christian demon hunters to exorcise the house. But they flee in terror at what they’ve found.

So, as Kate and Chance head into the haunted house, they begin noticing little things here and there that are slight tip-offs that the house is haunted. But each of them attribute it to the other person’s strange ticks and weirdness. Knives on the counters. Opened cabinets. Water that starts running on its own. Weird flex Kate… knives much? Well, Chance knows that he will need to kill Kate here at the house, and has brought a syringe, and an extra vile of drugs, just in case. But that night, Chance is visited by his daughter. His daughter who is dead. Apparently, Chance and his daughter were out at their local pool together, and he was drinking. He fell asleep, and his daughter drowned in the pool. But when he was visited by his daughter, it was the haunted house messing with him. He passed out as a result and slept through til the morning.

Now remember… we are telling this story in chronological, ACTUAL EVENTS, order. Right? Come to find out, Kate had already decided that this weekend would be the perfect weekend to commit suicide. So, after Chance passed out from shock, she gets her hand bag and all the drugs she brought for this purpose, and she overdoses there on the couch. She had been planning to hang out with Chance, have a big night, and then die later that evening. But in the morning, when Chance wakes, “Kate” is there with him. (This is House-Kate, or ghost Kate. Or just “Kate.” Okay? This is not the real Kate. Kate is now dead.) Now, “Kate” has found the video of her grandmother wanting her dead and she’s decided that, like Romeo and Juliet, Chance and herself are going to go out in a blaze of glory together. And so she offers Chance wine that has been drugged with the drugs he was going to use to kill her. He realizes what she’s done, and forces himself to throw up the drugs, in the hopes of saving his life.

Eventually Chance realizes that Kate is actually dead of an overdose, and that the house, the same house that resurrected his daughter to haunt him, has also resurrected Kate… or re-envisaged Kate anyway. Chance takes Kate’s body, and puts her in the trunk. Only problem is? He can’t find his phone, and “Kate” is doing her best to keep him from finding it.

Meanwhile, Rita and Dennis have gone camping in order to get away from the house. They’ve put the house up for rent just to see what would happen. Maybe the demons would follow the renters out. Who knows, maybe the house would change somehow. But, halfway through their camping trip, the duo decide, you know what? Screw the house. We are going to start over, have kids, come what may. COME WHAT MAY! It’s a love story straight out of the Moulin Rouge. How glorious. But when they arrive at the house after asking the renters to leave, they are shocked to find that the renters are still there. There is luggage there in the front room and a Christmas tree (Quick tidbit – on the luggage tag is a real address from Syracuse New York – well, they changed the last two digits of the zip, but otherwise it’s real. Oh, and there is a real phone number there too. Maybe you should call it and tell me if a monster answers, because there is literally no way I’m calling that number?)

Eventually, a man appears at the property with an axe. There is confusion about what is going on, but one thing is for certain, he believes that “Kate” – the “woman” he is with, is unsafe. That Rita should leave the house, and shouldn’t be in there with her. That Kate may very well kill them all, that there was going to be a bloodbath. More importantly, that something in their house did this to her.

After trying to convince Rita and Dennis of the trouble they are in, Dennis punches Chance in the face and sends him on his way. BUT CHANCE STILL NEEDS HIS PHONE. You remember, the one with the video of Grandma telling Chance that she wants her granddaughter dead? So, that night, Chance comes back to the house, steals Dennis’ gun, and forces Rita to give him her phone. (And this was the bit I had the WORST time trying to figure out.) Please pay close attention here. Chance then uses Rita’s phone, to call his own phone, which rings downstairs. He finds his phone, and places Rita’s phone on the puzzle table. Chance then goes back upstairs, and duct tapes Rita and Dennis together. Got it? Chance then leaves and gets in his car in the driveway where he calls Kate’s grandmother. Of course he is planning to tell her that the job is done… but he learns that she has died. Obviously visited by Kate. .

Immediately after the phone call, he’s visited by his own daughter who is not only haunting him, but also attacks him, and leaves him dead on the lawn out front of the house. Rita and Dennis then crawl their way downstairs, still duct taped together, and Rita manages to pull her phone off the puzzle table with her foot. They then call the police. After calling the police, they crawl out to the front lawn, and await the police’s arrival at the house, and as they do, Rita tells Dennis about the idea behind her children’s book. THE END.

Now, there is one scene that is dropped into the middle of this ending section that made it extraordinarily complicated to decipher. Rita and Dennis have just returned home from camping. They haven’t found Chance yet. And they are closing up the cabinets, and locking the refrigerator door, etc. And they are talking about where they see each other in 2 years. Maybe they’ll have kids. We’ll see. But as the movie ends, and the duo are on the lawn, duct taped together, Dennis tells Rita that he thinks they should adopt, and thus concluding the arc of their conflict, and resolves the question about their having kids in this haunted house.

The story of Home With a View of the Monster is basically a clever Twilight Zone episode. It’s a haunted house that the owners are trying to figure out. And another couple, a couple with very deep, and dark pasts, stumble into. These two people wind up dead, and we are left with the owners deciding they are going to move forward regardless of the house chaos. Does that help? I’ve probably been asked 5 times by people who couldn’t untangle the mess that was this ending. So maybe I’ve finally helped a few of you to piece it all together? Or not! Hahaha. If not, just ask your questions in the comments below. If you’d like a couple other movies like this one, maybe check out, They Remain, and also The Wind.