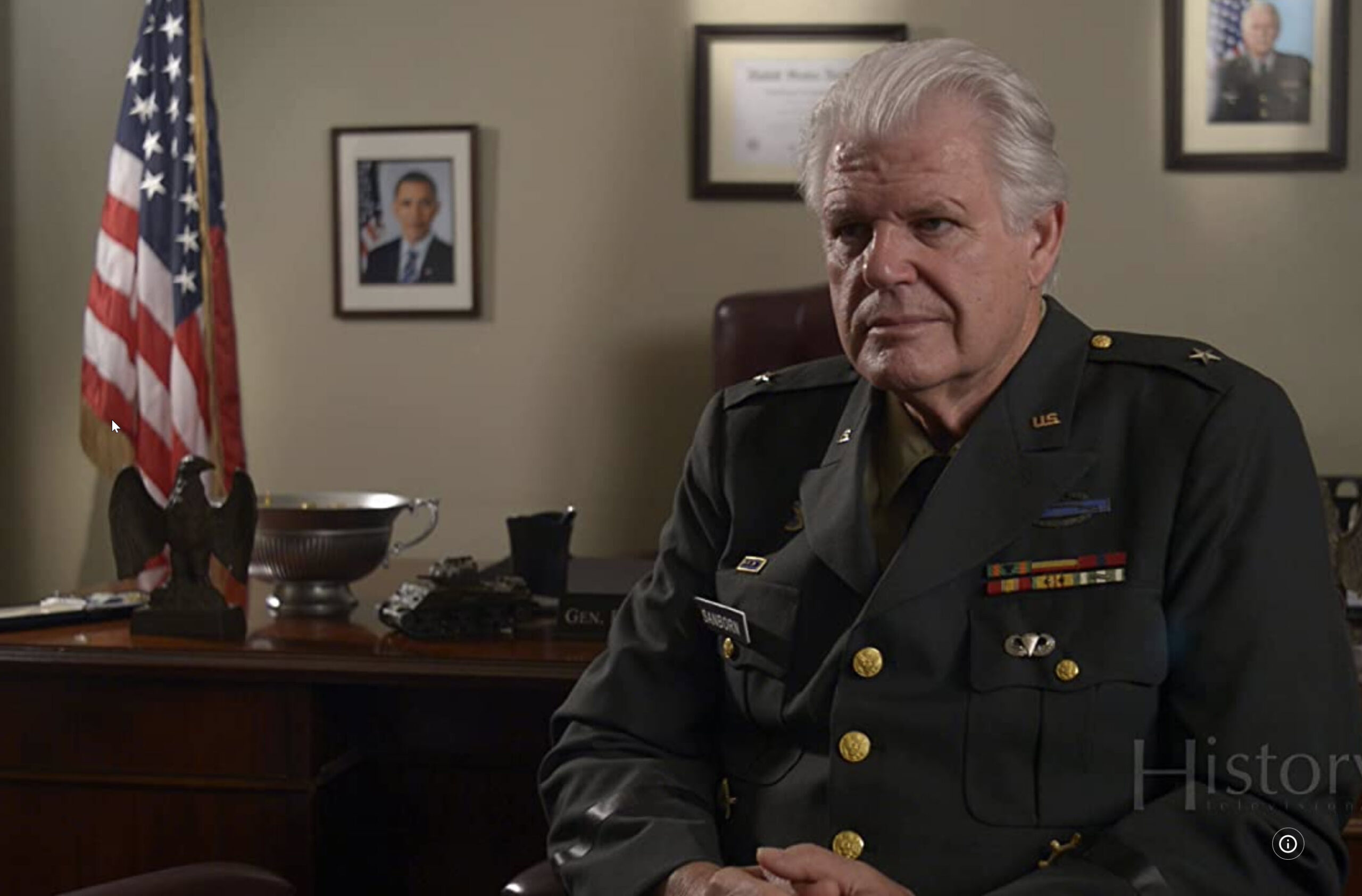 History of Time Travel Interview with Ricky Kennedy. The other day – I brought you a film called History of Time Travel and I was all like, fan-boy-ish about it because I’ve always wanted to write my own time travel movie and here is this guy that not only does it, but does it brilliantly, and on a shoestring to boot. And guess what?! If you’ve never heard of it, you can watch it right here on Prime… like for free. But here’s something I bet you didn’t know – when you go over there… and you hit play… you are directly helping with the next movie that Mr. Kennedy will be making. And when you hit play again? You are helping with the one after that… and so on. So, go over there, hit play, and then forward the link on to your friends.

The film is best described as a time traveling Operation Avalanche, which, I gotta admit, is possibly the best compliment I could give it. Regardless, check out this trailer, and then… yes, I’ve said this already, but I’m going to say it again – and no, I’m not affiliating that link, or getting any credit of any kind, I just am dying to watch Kennedy’s next film, okay? Great.

So, yeah, I was lucky enough to have Mr. Kennedy swing by the site and find our original discussion of his film – and he was kind enough to correct a mistake I made. But then, what he didn’t realize was, that I had planted that mistake, back in time, in order to catch him in the future, so I could ask him about doing an interview! I know! Brilliant. And here we go – let’s do this:

THiNC. – “How did you assemble your cast, I’m sure you were budget conscious throughout, were they all fellow students? How would you recommend to other potential movie makers to make a movie on such a shoestring budget?”

Ricky Kennedy – “While a number of roles in the film were filled by fellow film students we did bring in some actors from out of town. Elizabeth Lestina (who played Anne Page) and Fazia Rizvi (who played Dr. Cagle) were both from Austin. Everyone else was local. Daniel W. May (who plays the younger version of Edward Page) was a fellow graduate film student. His twin brother Dudley May was the assistant director for the film and has a small role as well.

“A great resource for the film was the Lamplite Theater Company located here in Nacogdoches, TX. One of the big giveaways that a film is a student production is that the entire cast is under the age of twenty-five. Reaching out to a local theater company allows you to cast actors who are age appropriate for the various roles in a film. Plus working in live theater they are excellent at memorizing their lines. A great help with a tight shooting schedule.”

THiNC. – This is a stupid question. But I was explaining the movie to my daughter, and in my explaining, I couldn’t figure out how to explain the way in which the talking heads kept retelling the morphing stories of their past without giving up the game immediately. How exactly did you first come up with that idea? It’s a brilliant format for a time travel film.

Ricky Kennedy – “At my school, Stephen F. Austin State University in Nacogdoches, the film program shoots a feature film every summer. This is so that the students can learn all the jobs of film production and have on-set experience before they graduate and look for work in the film and television industry. They will already know what will be expected of them and how to work in a professional manner. Additionally graduate students, in order to earn their Masters of Fine Art, must make a feature length film. The History of Time Travel would be my graduate thesis project.

“Having worked on several student features and numerous short films I was very aware of the problems we kept encountering over and over again while making narrative films. Actor availability, finding locations, getting the shots we needed, sticking to a schedule, having back up plans for when things fall apart, etc. I wanted to write a script that would avoid a lot of the potential problems of a traditional narrative film.

“I knew I wanted to make a movie I would like to see. It needed to be something with a great concept to hook you in. I really like high concept Hollywood films like Groundhog Day or Liar, Liar. Unfortunately, I didn’t have a Hollywood budget. I would need to make something that was high concept, but low budget. I thought about different genre’s and science fiction was something I hadn’t tackled yet.

“I’ve always loved time travel films with the Back to the Future trilogy being my favorite. One of the most enjoyable things about time travel films is discussing it afterwards and looking for plot holes and paradoxes to see if the story held up. But making a time travel film as a traditional narrative would be financially out of my reach so I would need to approach it from a different angle.

“I really enjoy fact-based documentaries that you see on the Discovery Channel and PBS but I also enjoy the pseudoscience documentaries about UFOs and Bigfoot. I thought that might be a fun way to approach the idea. Make a documentary about the invention of a time machine but as a cheesy low budget “documentary” you would see on late night TV.

“This would be doable on a shoestring budget as the bulk of the film would be talking head interviews and I could cut to a still image or a piece of stock footage. I liked the idea of doing a time travel documentary but when I really thought it out it raised a lot of questions as to how such a film could even exist and how would anybody know what the time traveler’s did.

“I immediately thought about a line in Back to the Future Part II. Doc and Marty are about to leave the dystopian alternate 1985 that Biff created and go back to 1955 to stop him. Marty tells Doc Brown that they can’t leave Jennifer, his girlfriend, or Doc Brown’s dog Einstein behind. Doc Brown assures Marty that if they are successful in repairing the damage Biff has done that the alternate 1985 will disappear and be replaced with the correct 1985 and that Jennifer and Einstein will have no memory of the alternate 1985. I thought that was an interesting concept: time travel but not from the time traveler’s point of view.

“Time travel would happen off screen but we would see the effects in the documentary we’re watching. It’s taking the idea of the photo of Marty and his siblings from BACK TO THE FUTURE (1985) and applying it to a motion picture or video tape. The documentary, like the photo, exits but what the documentary, and photo, depicts keep changing.

“The audience viewing the film would be in a bubble unaffected by the time travel so they would see all the changes but the talking heads in the documentary would be completely unaware of what was happening.”

THiNC. – “In all my years interviewing brilliant movie makers, I have never heard a more thorough or compelling answer. That is fantastic. Thanks for the insights! What movies did you look to for inspiration and ideas in the creation of History of Time Travel. It is really unique, and yet I see homages to other films potentially.”

Ricky Kennedy – “A: Back to the Future is a major influence as was the television series LOST. The Indiana Project was an homage to the DHARMA Initiative featured on LOST. The Island on LOST is said to be “Just outside Portland, Oregon.” So I decided as an Easter egg to set my secret time travel facility just outside Portland but in another state. I found a Portland, Indiana and thought that would be as good a place as any so I named it the Indiana Project. It also worked as a reference to both the Manhattan Project and Indiana Jones. Coincidentally I discovered that a polio epidemic had affected Portland, Indiana back in the late 40s and fit perfectly with my script where one of the character contracts the disease. So what was initially just a fun reference fit seamlessly in with what I had already written. It was a happy accident.”

THiNC. – “There are tons of little nuances and changes happening behind the scenes, and throughout the movie as the world is overrun by communism and the things on the wall change throughout the filming. I saw a lot of them, but are there some that some people regularly miss? Or tricky ones you want to make sure we caught?”

Ricky Kennedy – “Anytime there is a newspaper or document on screen pause the film and read it. There’s some backstory buried in the text plus more Easter eggs and inside jokes.”

THiNC. – “In just my first viewing alone I started pausing the film, screenscraping, and zooming a lot. It was pretty obvious early on there was a lot going on in this film. Do you have any new films that you are working on currently? Anything we can do to support your next film? Like fly out to your set and fetch you coffee as you direct? I’m happy to help! hahaha.”

Ricky Kennedy – “I’m nearing the end of post production on my second feature film entitled “A Year From Now.” It’s A Christmas Carol meets Groundhog Day and I came up with the initial concept while I was developing “The History of Time Travel.” It will be out in November.”

THiNC. – “Look who has an alert with your name on it now! Fantastic. Please swing back by when you release it, we would love to talk with you about it here. Can’t wait. A subsection of this site is all about looping films. Regardless, thanks so much for taking time out to chat with us here at THiNC. we loved your movie and can’t wait to see what you are doing next.

And again – just so everyone gets the point here – go watch the film History of Time Travel over on Prime – it really is fantastic, and a joy to watch. It’ll probably take a couple of viewings before you really grasp the depth of everything going on here. Trust me on this one. It’s fantastic.