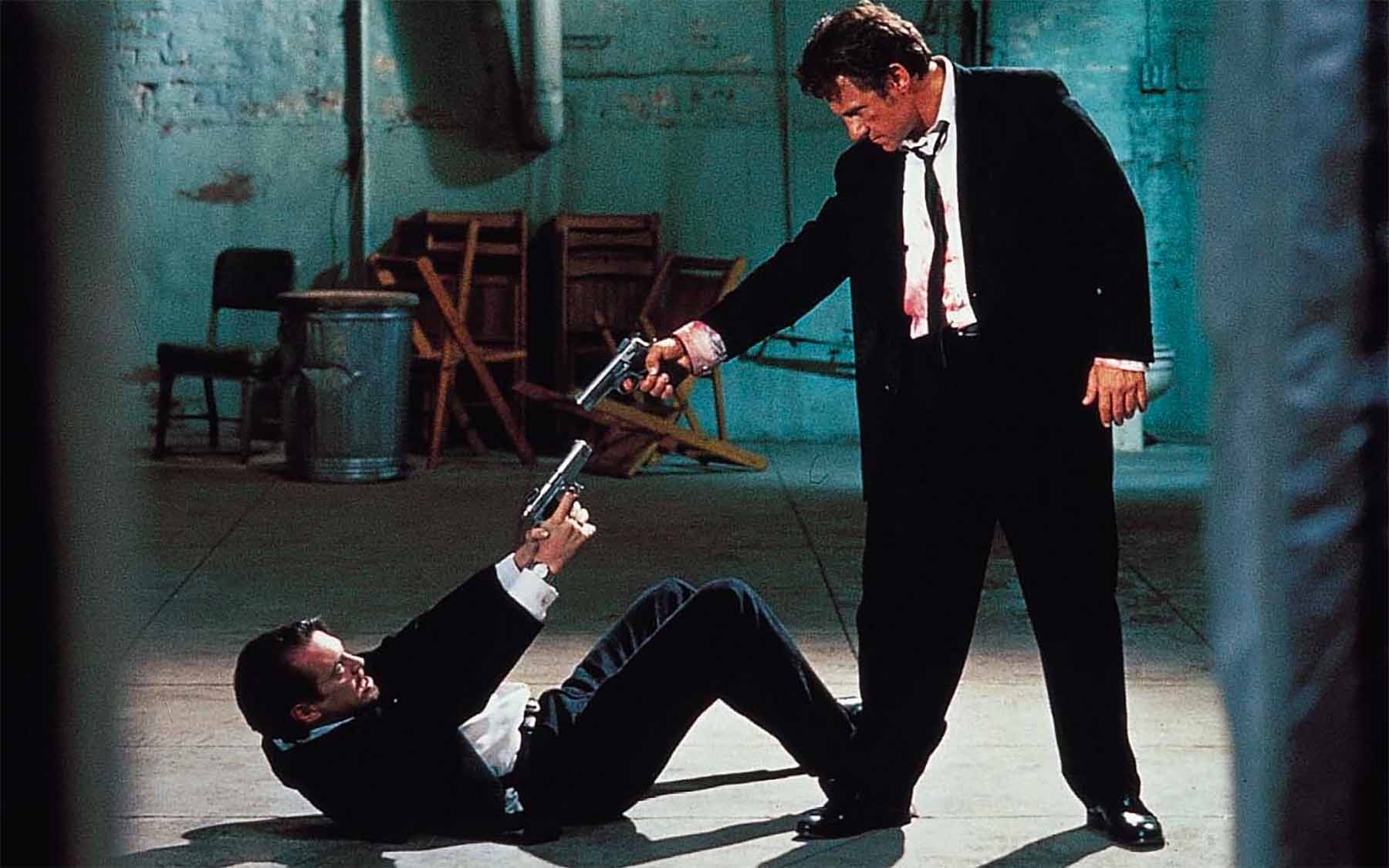 Top 100 Movies of All Time Reservoir Dogs. We are working our way through the top 100 movies of all time based on this Hollywood Reporter list. Instead of doing low budget mind job movies for a little while, I figured it would be good to move through some “important cinema,” in order to see if we can learn something about what makes them great… or different from any other film. We’ve already done Bonnie and Clyde, and Seven Samurai… and today we are marching forward with Reservoir Dogs.

Oh, now we are talking. Finally a movie that plucks at my heart strings and sings to me in melodious voice. I am all about brilliant dialogue. And as far as dialogue goes – no one scripts a screenplay conversation quite like Quentin Tarantino. Even Aaron Sorkin doesn’t script dialogue quite as brilliantly as Tarantino. (Heresy, I am aware. I’ll await the stone hurling in a genuinely beatific genuflection repose.) But what does Tarantino do that’s even better than his dialogue… no, that wasn’t a rhetorical question. Consider the question! What is it?? It’s his editing. His dialogue is brilliant, his editing is other worldly. Take the opening of this movie. It’s a low key beginning. Eight guys, eating breakfast, jawin’ about Madonna’s lyrics, and the ethics of tipping. It’s funny. It’s lighthearted. Then immediately cut to Orange (played by Tim Roth – my favorite movie of his is actually Rosencrantz and Guildenstern Are Dead, believe it or not), bleeding out in the back of the convertible as White (Harvey Keitel – Pulp Fiction, of course) drives them away as quickly as he can. Wait, WHAT? It’s the best kind of jarring imaginable.

Well, since we seem to have already started, let’s keep going, shall we? White and Orange are fleeing. They head to Joe’s warehouse, and meet up with Pink (played by Steve Buscemi), who is CERTAIN that the heist was a setup. Which is when we learn that Brown (played by Tarantino himself) is dead, Blue (Edward Bunker), and Blonde (Michael Madsen) are missing… and worse, Blonde has murdered several civilians during the heist. And the conversation turns to their outrage that Joe would hire a madman like Blonde. Pink and White argue about how to help Orange and whether they ought to get medical attention for him or not. But all that goes to the wayside when Blonde arrives with a kidnapped police officer (played by Kirk Balz) in tow.

Jumping backwards (editing… see?), we watch as Blonde meets up with Joe and family having just finished a 4-year stint in jail. And, to reward him for not ratting out Joe and copping a plea, they give Blonde a job – which then flips to Joe offering him a role in a diamond heist. Which explains how a sociopath got involved in the heist. Jumping back to “the present,” we watch as White and Pink beat up Nash in an attempt to get info out of him. When Eddie arrives, he tells them to get the diamonds, to get rid of the getaway vehicles, and he leaves Blonde in charge of the cop, and the injured Orange. Yeah, this is the really bad sort of not good. And soon, Blonde has cut off the cop’s ear, and doused him with gas, ready to light him on fire.

Now, stop… a comment on this particular scene. You guys have dropped all manner of crazy movies into my lap over the last ten plus years. Horror movies I would have never willingly watched on my own. Thrillers. Supernatural chaos. I watched Midsommar for the love of all that is good and holy. But nothing I have ever seen in technicolor has ever compared to the sheer psychic terror involved with this one particular scene. Blonde cuts his ear off. And then? Is ready to immolate him? (Sorry, fire, no thank you. Nope. Nope. Nope. I’ve told my kids to bury me out back in a hand dug hole, just don’t cremate me! I’m so unhinged by the idea of burning, even post death!) Okay, sorry. But before Blonde can turn the cop into a human torch, Orange snaps awake and shoots Blonde dead. Woah. And it’s then that Orange tells Nash that he is an undercover cop and that the cops are coming. Jumping backwards in time, again… we watch as Orange tells a glorious story about drug deliveries in order to get accepted into the group.

The brilliant thing about this scene with Orange is that it’s all made up. He has spent weeks, nigh on months, memorizing this fake scene in order to tell this elaborate story and to insinuate himself into this group, and work his way under cover. Jumping back again to the present, we meet back up as Eddie, Pink, and White come back to the warehouse, where Orange has to convince them that Blonde was going to kill them all and take the diamonds. But Eddie kills Nash, and is convinced that Orange is not telling the truth. Joe then arrives and lets them all know that Blue is dead, killed by the police. But before Joe can kill Orange, whom he suspects of being a cop, White jumps in and saves Orange. This immediately escalates into a Mexican standoff. And then all three. Joe and Eddie? Die. White and Orange are both shot.

Which leaves Pink… the only uninjured person of the group, takes the diamonds and runs. White holds Orange, who is now dying… as Orange admits to White that he’s an undercover cop. Now, this is an enormous betrayal. White just risked his life to save Orange… and it turns out? Orange is a police officer?? So White puts his gun to Orange’s head, as the police storm the building and order White to drop his weapon. But White shoots Orange and the dies in a hail of bullets.

The Impact of Reservoir Dogs

No other movie maker is more instantly recognizable than Tarantino. Take a random 30 seconds cut out from his oeuvre and I’d bet 90% of people could guess it comes from a Tarantino film. His bloody, talky, crime chaos, defined the 90’s and aughts film making. But it’s because of his highly poetic dialogue… these gloriously profane snippets of opinion on society and life, … you know, the wildly digressive thoughts on Madonna and tips… that define Tarantino. That coupled with the white hot flash of violence you know is only a turn away. Just the other day I reviewed Wrath of Man, by Guy Ritchie, who definitely comes from this same school of cinema thought.

And yet, Tarantino stole from his cinematic forefathers. The Mexican Standoff, and the under cover cop? That came whole cloth from City on Fire (1987). The crew that turns on themselves? That came from Kubrick’s The Killing (1956). Or heck! The color coded code names? That came from The Taking of Pelham 123 (1973). But it is Tarantino’s brilliant commentary on modern life that takes these re-fried ingredients and makes them all his own. I’m telling you – nothing matters more to a good movie than a screenplay. And Tarantino writes the best screenplays in the business. Yes, in the world of independent film, there have been a few that have chased his greatness (First one the comes to mind is Jonathan Perera’s Miss Sloane.) but they are all still chasing.