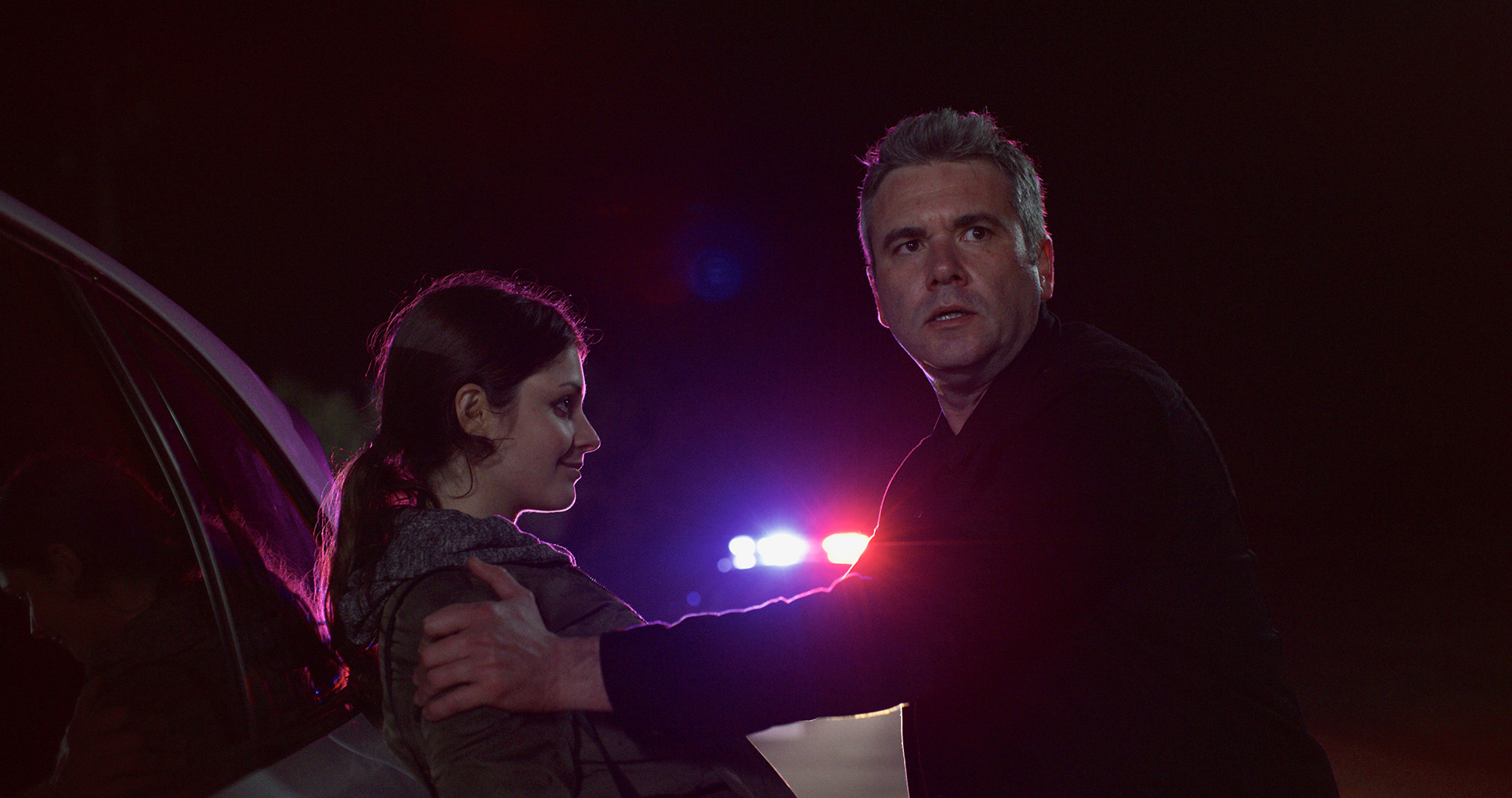 Chris. Nice job buddy. Thanks for the Night Drive movie recommendation. And now? I bring it to you – here we go – my Night Drive fun little movie recommendation post. Is it Memento? Or Primer? Or Midsommar? No. But it is a fun little movie that is worth your 90 minutes. Heck, I think it might not even be 90 minutes. 80? My only critique is that the movie could have used a little more oomf to it. Maybe one more head fake, mindjob to it. But as far as fun little indie movies go? I had a ton of fun watching Night Drive and I think you will too.

Night Drive is sort of a mini-mindjob-in-a-box-without-a-box? If you’ve already seen the film… you know what I’m talking about. The scale of it sort of reminds me of Perry Blackshear’s latest movie, When I Consume You (which I will be talking about soon enough – have an interview coming with Blackshear as well!! WOOT! Finally nabbed that unicorn.). Just a handful of actors, just a handful of sets… but most of it all driven by dialog and interesting questions not being answered. Look – if you haven’t seen Night Drive yet, go check it out over on AppleTV. There is one clever twist to this little movie, so definitely do not even watch the trailer, or read another word, without watching. Okay?

Charlotte (the funny Sophie Dalah) orders an Uber, and Russell (Al Bowen) obliges by arriving, and offering to drive her where she wants to go. He takes her to her ex’s house, and she steals a box that he had. What’s in the box? I don’t know, but I’m wondering if it has someone’s soul in it like the light that was in the briefcase in Pulp Fiction. (Right? You think it was Marcellus Wallace’s soul in that briefcase, right?) When Charlotte pays Russell to keep driving her around town, they head over to another house, when, suddenly, someone runs out in front of their car and gets hit. He’s dead, for sure. But wait. He’s not? Because he just stole the car while they were in the hardware store getting shovels to bury him? What? But when they steal a car, and head back to “dead guy’s” house, they find that he’s just fine. He’s stolen the briefcase, but Charlotte is pretty hellbent on getting her briefcase back. WHAT IS IN THAT LITTLE SUITCASE THING? So hellbent – that she shoots the previously dead, then undead, then dead again guy in the face.

Charlotte: “What difference does it make? You hit him with a car, he was dead, then he wasn’t, now he is…”

Which then means that the duo get a chance to utilize their recently purchased shovels! Yeah, them! And during their time in the desert, digging a hole, Charlotte tells Russell exactly what is in the small suitcase. It’s a key. And the key opens a room. And in that room, there is a time machine. And the time machine will allow the jumper to go back to any time during that person’s life… apparently you can’t jump further back then when you were born.

As I was watching the film, I was like, uh. OK. Fine. You can only jump back as far as you were alive. Fine. But not that I’m thinking about it – I remember a quote that Charlotte tells Russell when they first met. “How old are you?” “What year are we in again?” “2018” “Then I’m 22.” Does that mean that the jumper decreases in age as they jump backwards? So if Charlotte jumped back to 2000, she’d be 2 or something? Huh. Weird. OK. What do you guys think? I went looking for the author of the screenplay, but couldn’t find a way to contact her. (Anyone have her agent’s number, I’d consider it a personal favor if you’d hook me up.)

Regardless, Russell and Charlotte head to the room, they kill a cop (random) and then jump backwards to the moment after they killed the cop (so she can knee him in the balls again, because it’s all about the lulz). “What, you didn’t change 9/11??” “You act all high and mighty, but you ask anyone what one thing would you change? And you know what they aren’t asking for? World peace.” Which is sort of the thought exercise of this movie. If you could do a jump in your life time, in your arena, and sphere of influence, what would you do with your mulligan?

So Russell steals the watch, the key, the suitcase, and jumps backwards to when he took Charlotte to her ex’s house in order to steal it. And when she comes out with it, and she isn’t looking, he shoots her in the head. Buries her, re-walking the path that he and Charlotte were just on, but this time burying her instead of some random guy they had to kill. (What is his story anyway? Think his name is Frank, no? He seems tangentially important. Ginger Ale much?) Then Russell heads back to the bar where he and Charlotte had had a beer, and Frank joins him at the bar. And Russell tells him that he’s celebrating his IPO going live. The end. Wait what?

In the scope and scale of the movie we could see, it’s pretty simple. Charlotte and Russell move forward in time… —-> and eventually, they jump backwards like 15 minutes. <– Then Russell steals the key, and goes back <—- a couple hours. And right before the movie ends, we learn what he is about to do… that he wants to jump backwards in time several years, in order to avoid selling his stake in the start up he stupidly gave up. Right?

Now, could there be more going on here? Like for example, could Frank be another Russell that has forgotten that he had been messed around with? Yes. Could Charlotte have spent the evening with Frank driving around the city together before? Yes. He could have… because she could just go backwards in time and not do that again… and he wouldn’t know any better. We even get the sense that these are the sorts of shenanigans she has been up to her whole life when she tells Russell that she and her friends just mess around with their newfound power. That she has lost track of it all.

If this were my screenplay, I definitely would have added one more flip to the script. Let’s see if we can play it out in a way that doesn’t make such a light-hearted movie become such a downer (come on, Russell killing Charlotte, regardless of how big a psycho she was, it wasn’t cool.)

Might be too much! hahaha. But I think another layer to the movie would drive the story faster, and decrease some of the lingering cuts that seemed to be filler.

You get the idea though. If you’d like a few other good time travel movies worth your time – maybe check out The History of Time Travel, 41, or maybe a better comparison would be Palm Springs?