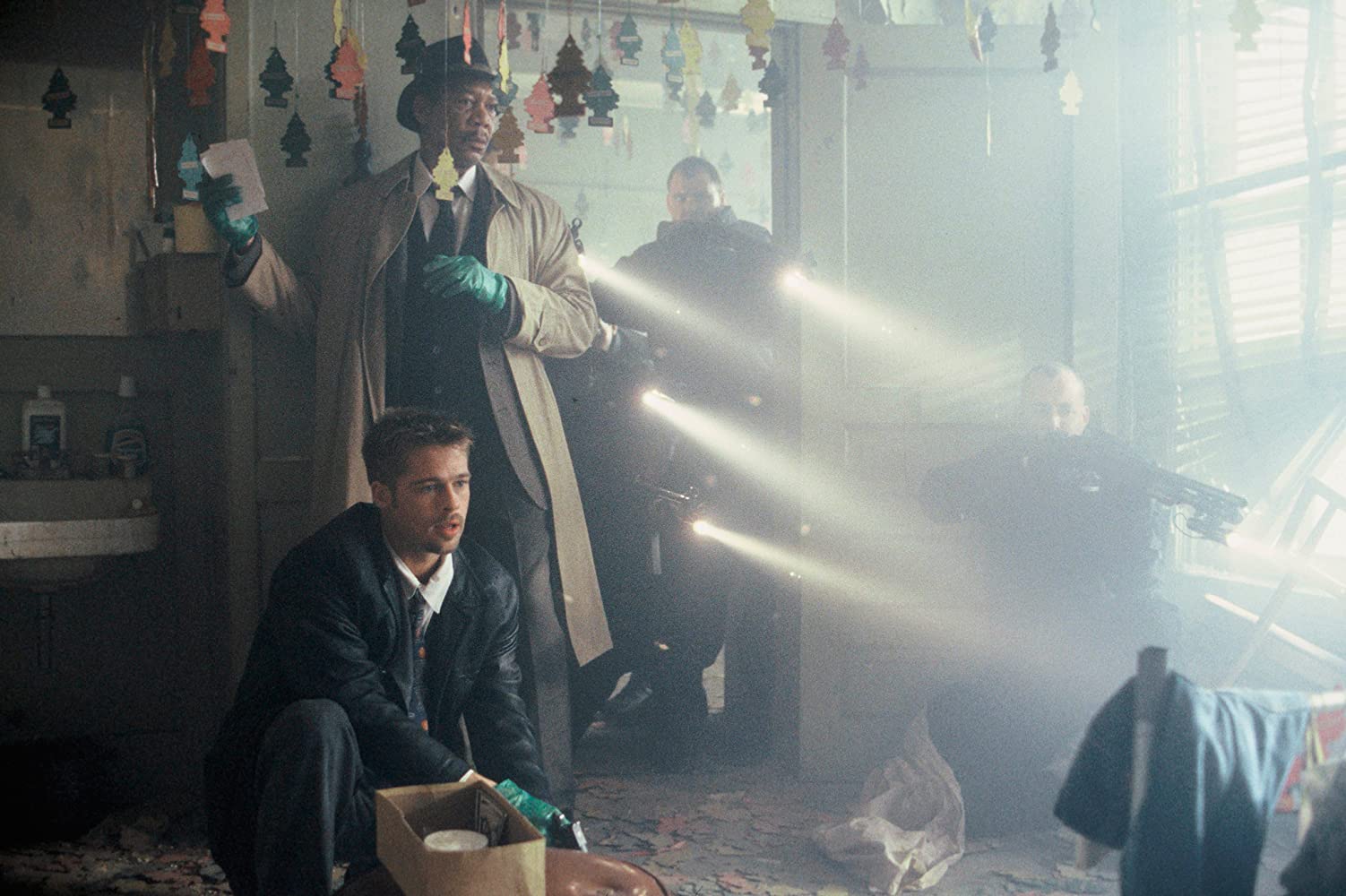 For the past few months, we have methodically going through the Hollywood Reporter’s list of the Top 100 movies of all time. Why? Solely because we love learning about movies. And why not start our education by walking through the movies that Hollywood thinks are the hundred best movies of all time? I know, right? Brilliant. And today is a special day in that we have arrived at one of the only vintage movies I’ve been dying to have cataloged here on THiNC. (The other big one is Donnie Darko – I know… I know. Please don’t start. It’s a mental hurdle… I have such high esteem for that one I just can’t start.) ANYWAY… today is the move Se7en, and it’s going to be a fun one. So, unlike my past Top 100 movie countdown discussions – I’m going to do this more like a normal THiNC. breakdown (nervous or otherwise). Detailed walkthrough, movie theories, take-aways, that sort of thing. This is a movie that is in my normal wheelhouse, let’s treat it as such, shall we?

I will say this, of all the movies that dismantled my world view completely and totally, none did a better job of it than Se7en. None. And I’ve seen a lot of crazy movies that has made me reconsider, ponder, and reevaluate my own world view. Se7en is critical in that I was deeply ensconced in the world of Post Modernism and the preeminent philosophers of this framework: Søren Kierkegaard, Hegel, Heidegger, and most predominantly, Friedrich Nietzsche. With that in mind – Se7en broke my brain. The philosophy, mental darkness, and gut-wrenchingly surprising twist of the ending? All worked to double me over once the film was over. It was, in a word… brilliant.

I am watching the Remastered BluRay version of the film – and all times are relative to this version only. And it should go without saying, that even though this is a 26-year-old film, if you read this, and haven’t watched this film already? You will have just spoiled one of the most shockingly brilliant movie endings of all time. And it’s your own dumb fault… no offense. This link will help…

Opening – Mills and Somerset meet, and the stage is set for the new world that Mills has joined. It should also be pointed out that Somerset’s name is relevant to the fact that 7 days from now, he will be retiring. Summer-set. Could it be that Mills is a reference to John Stuart Mill, the philosopher who attempted to utilize utilitarianism as a basis and system for morals? We’ll leave that as an open question for right now.

Title sequence – it has to be said that this movie has the single best opening titles scene of any movie of all time. I challenge you to find me a better one. Nine Inch Nails in the background, and the hardcore work of John Smith as he goes about his work of setting us, the viewer up, for one finale we will never forget.

Murder #1 – GLUTTONY – an obese man is found, hands and legs tied, face in a plate of spaghetti, and dead after being force fed over the course of 12 hours. He eventually passed out, and then was kicked in the stomach, causing his internal organs to rupture, and death. “If you want somebody dead, you drive by and shoot him… unless the act itself has meaning……”

Murder #2 – GREED – Eli Gould was bled to death in his law firm office, but it appears that Eli was forced to cut a pound of flesh from himself. Which is representative of the sin of greed.

Research – At the same time, Somerset learns that Gluttony was force fed chips from the kitchen floor, and he found a note behind the fridge. “Long is the way, and hard, that out of hell leads up to light.” Somerset realizes that there will be five more murders are coming.

And Somerset goes to the local library, after hours to research the seven deadly sins. It’s a master class in creating tone and mood… why not go during the day, when it’s bright out? Mood… darkness. Why aren’t the library lights on other than just the lamps? Mood, darkness. Brilliant.

Somerset is invited to dinner by Mills’ wife – and the viewer is introduced to Mills’ wife properly. Which, is critical to the ending. After dinner, the duo begin researching the murders, and Mills makes his first actual contributions to the case. “He was preaching.” “Punishing”…. In Dante’s Inferno Pride comes first. Mills and Somerset bring Gould’s wife to the office to see what she was supposed to see and they discover prints on the wall:

Murder #3 – SLOTH – The prints in Gould’s office lead them to the third murder found. The police scramble, heading to what they think is the murderer’s location, but only realize that it is another victim. He happens to still be alive when they get there. 1 year ago, the murderer chained him to the bed.

The Hunt – Somerset pays someone to do a search against a hidden FBI library checkout database in order to try and triangulate on him and come up with a “John Doe’s” address. When they get there, Doe instantly starts shooting at them, and a chase happens, ending with Mills having Doe put a gun to his head, and then not shooting him. Afterwards, they sack his apartment, find his stash of money, his notebooks, but ultimately Doe calls his own house, and tells them he will now have to speed up his schedule.

Murder #4 – LUST – after discovering a photo of a woman at Doe’s apartment, it leads them to her murder. Basically, a man was forced to wear a strap-on blade, and he ended up killing her while Doe pointed a gun at his head. And when Mills and Somerset find him, he is hysterical, completely out of his mind.

Murder #5 – PRIDE – The following day, they attend the scene of a fifth victim, a model whose face has been mutilated by Doe; she was given the option to call for help and live disfigured or commit suicide by taking pills, and chose the latter option, representing pride.

Murder #6 & #7 – Here’s where things start to get tricky. As Mills and Somerset head back to the station, Doe turns himself in, completely covered in the blood of an as yet unidentified victim. Doe promises to show them where he buried the two victims that represented ENVY and WRATH. But if they refused, he’d cop a plea to insanity and that’d be that. On the way there, Doe tells the two men that all of his victims deserved to die… that he was a martyr, chosen by God to shock the world out of its apathy.

They all head out to the middle of nowhere and while they are there, waiting, a delivery van approaches and Somerset intercepts the van and the package. Somerset opens the package, and flips out… telling Mills to stay back. And as this chaos unfolded, Doe admits that he represents the sin of ENVY. That he envied Mills, and his wife… that she begged for her life and the life of her unborn child. Which Doe then learns that Mills didn’t know she was pregnant. Then Mills looks into the box, sees that it is his wife’s head. As a result, Doe wins by inducing Mills to fulfill the role of WRATH by killing John Doe. As the movie ends, we learn that Somerset will be around and won’t be retiring. “Ernest Hemingway once wrote ‘The world is a fine place and worth fighting for.’ I agree with the second part.”

The movie is a Mobius strip that ultimately eats itself in this sort of self revelation, denial and revelation on going, unending cycle.

But if we look at Mills and Somerset, we see two possible extreme responses that are possible. Mills? He is destroyed by the murderer. Both physically, metaphorically, maybe even spiritually. Doe envied Mills, and took his wife’s life. Mills was crushed by this heartrending realization – and acted just like Doe wanted him to, by killing the murderer. And in that one action, Doe won. His seventh murder was completed. Conversely, Somerset transcends the murderer’s plan by extracting himself from the intended response. He could have, after all, murdered Doe as well himself. Also, we see that he has chosen not to leave the force, and not give in to the hopelessness of it all.

That is the trick of these modern times… do we allow the crush of the chaos of this world pull us under? Or do we choose to stand against the tide like Somerset? Yes, as Hobbes said, life really is ‘nasty, brutish, and short’… but do we allow that truth to define our short time here on planet earth? Or do we try to do good with what little influence and time that we have?

Interestingly, Mills labels Doe as an insane freak, completely discounting the message Doe is trying to communicate. Which, is, almost exclusively an Old Testament reading of the world. A vengeful and hateful reading and response to the world at large. That sin is to be judged. That you either live an upright and “moral” life, or judgement is meted out against you. Which, actually does make sense. If we live a sinful life, it separates us from the God of the universe, and barring the New Testament, the only way to survive the chaos is to live a sinless life. (Which Doe admits he isn’t – sinless that is – by architecting himself as one of his own victims. Right?) But then came the atonement for all our sins… Christ’s birth (celebration of Christmas!), his Death and also his Resurrection (Easter!). So, yeah, Doe is actually not insane… not in the least. Barring Christ’s work, we all deserve this sort of horrific justice he was doling out. No? Am I missing something here?

Doe to Mills, “It’s more comfortable for you to label me insane”…

This movie definitely held up over the past, whatever 30 or so years it’s been since it first came out. I loved the direction, the editing, the art direction, the sets, the screenplay. Kevin Spacey as Doe was an inspired choice. Morgan Freeman was glorious as Somerset. And, oh, by the way, Brad Pitt as Mills… he was a little much. But even so, he did fine. This movie was awesome, it’s still a mindjob to watch even all these years later. Super dark even today. I really enjoyed this walk back through memory lane!! This was a great addition to the top 100 list.