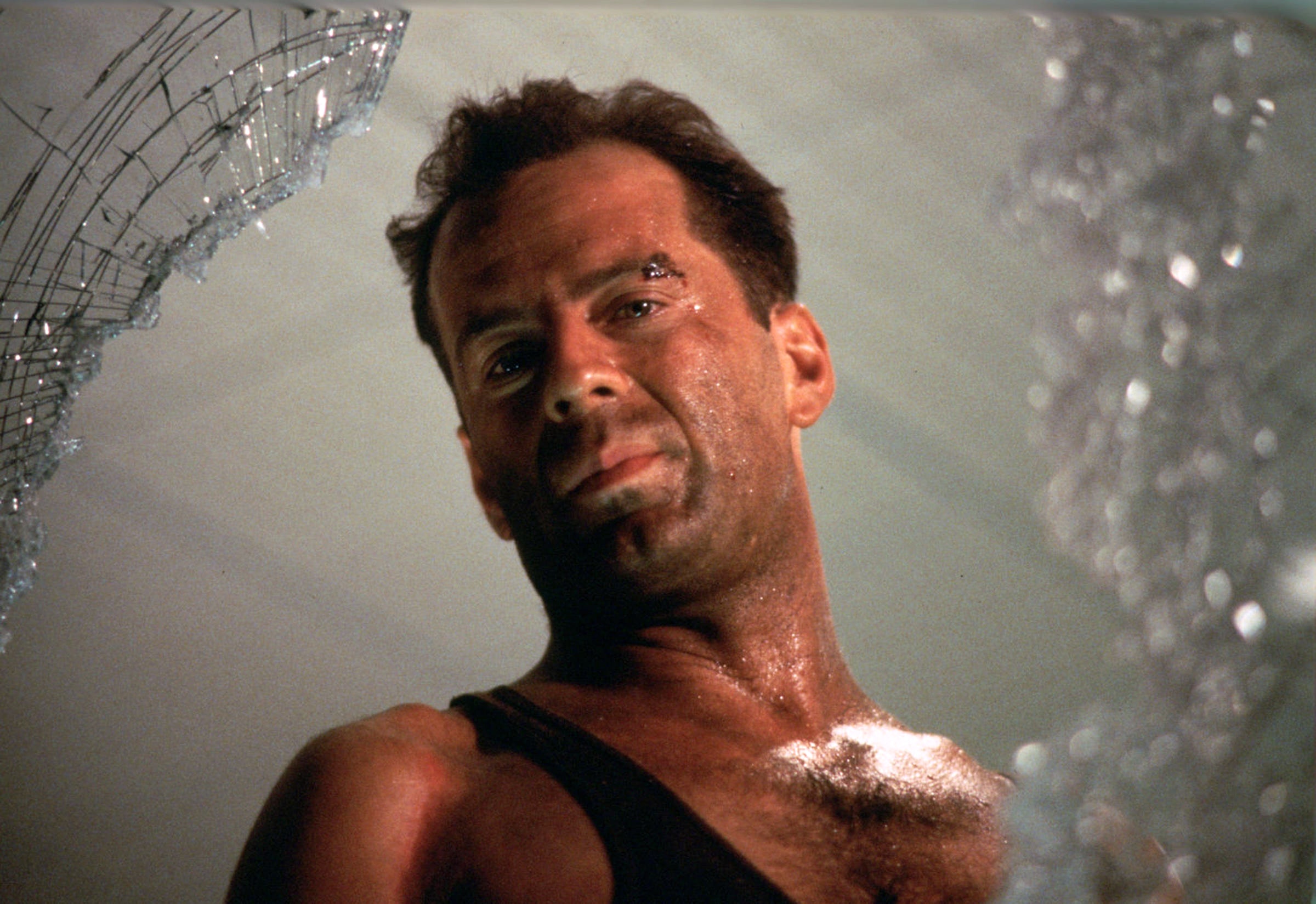 #83 of the Top 100 Movies of All Time Die Hard. A couple months ago I started this overt effort to learn from the cinema greats by systematically going through the Top 100 Movies of All Time. I just arbitrarily picked a half decent list to help us learn about the “the best movies of all time.” I thought that the effort of going through a list like this one might teach me, ostensibly you, a thing or two about films. But today is Die Hard?!? hahaha.

Stop for a second. I am probably the biggest Die Hard fan on the planet. I quote Die Hard almost as much as I quote Monty Python quotes. “Look! Strange women, lying around in ponds, distributing swords, is no basis for a system of government! If I went round, saying I was King, just because some moistened bink lobbed a scimitar at me? They’d put me away!” “WELCOME TO THE PARTY PAL!” “What? Behind the rabbit?!?” “YIPPY KAIYAH [email protected]#$#@$!” hahaha. Literally, I am constantly quoting from Die Hard…

First, a fact, Die Hard is the single best Christmas movie of all time. This isn’t a question. This isn’t something that needs to be certified. This is truth. And all of the haters that are on their high horse saying that “A Christmas Story” is the best Christmas movie – I’m sorry to tell you this, but you have been brainwashed, tortured, as a child. This is truth. You need to be reprogrammed. If you’d like to come to me for an intervention, I’ll be happy to help. But get ready to watch a LOT of Die Hard.

Alright, our glorious movie kicks off on Christmas Eve, as John McClane, a NY City cop, arrives in Los Angeles. Why is he flying to L.A.? Well, he assumed that his successful wife would fail in her big corporate play here in L.A. – you know, with the Nakatomi Corporation? (I’ve been applying with Nakatomi for years and man, are they a tough company to get into… so kudos to her!) Regardless, McClane is coming in order to try and reconcile with his wife and mea culpa. Or something. (Let’s all admit it, Die Hard isn’t about backstory and character development, but what backstory we do get is really pretty good.)

Argyle, the limo driver takes McClane to the Nakatomi plaza, and tells him he’ll hangout and wait to find out if McClane bombs with his wife or not. While McClane is changing out of his traveling clothes, and freshening up, the building is seized by terrorists – question mark. (Why do kids say punctuation these days? Why am I now doing it too? Did it come from hashtag unimpressed? Anyway.) The point here is that John McClane, the ex-cop, is not taken hostage, while everyone else is.

<PAUSE> – now, I have to say, that the innovative formula and precedent set here is that this is an action movie set in a closed box environment. Up until this point, our action movies were all, freewheeling, sprawling affairs. But Die Hard sort of managed to contain it, confine it, and give us a clever twist or two as well along the way. It was pretty innovative really in its emphasis on a single building. </PAUSE>

Hans Gruber – has setup his attack on the building as sort of a cover in order to steal the $640 million in bearer bonds that will be totally untraceable… that is, once he gets them out of the building’s vault. While they are starting that work, the group realizes that they have a rogue player moving about the building that they need to shut down. Gruber sends Theo, and McClane kills Theo, takes his gun and his radio. McClane uses the radio to contact the police, but they are not buying what McClane is selling. Al Powell! One of my favorite characters in the movie comes and investigates, but doesn’t see anything untoward occurring. Meanwhile, more “terrorists” die at McClane’s hands, and as Powell is backing out of the building, McClane tosses a terrorist’s body out a window and it lands on Powell’s car. “WELCOME TO THE PARTY PAL!” The L.A. police department quickly dispatch SWAT to try and storm the building, but the terrorist rebuff their attempts with a couple of rockets into the top of their armored vehicle. McClane, in response, tosses some C4 down the elevator shaft, exploding most of the building’s lower window.

(Another really versatile Die Hard quote right there – “No, but it’s gonna need a paint job and a [email protected]#$load of screen doors.)

After Takagi’s earlier murder, Harry Ellis, Holly’s co-worker, attempts to negotiate with the terrorists, but only ends up getting himself killed. Gruber is discovered by McClane when he was on the roof, double checking the explosives… but covers it with a thick Texan accent and tons of fake tears. McClane gives Gruber a gun, but it is unloaded… and Gruber is saved at the last second by other members on his squad. The FBI arrive, and begin running the standard FBI handbook for terrorist situations like these… a playbook that Gruber anticipated… indeed, needed to happen in order to get into the vault. And it is their intervention that allows them to finally get the final lock released, and access to the bonds.

The FBI tells Gruber that he will get his helicopter, but the FBI is basically just planning to use the excuse to use it as a breach location. Meanwhile, Gruber is planning to put all the hostages on the roof, and blow the roof when the helicopters land. You know, in order to fake his own team’s death… it was apparently a suicide mission all along, kind of thing. But instead, they’d use the chaos to sneak away with all the cash. (“On behalf of the Asian Dawn…” “the who?” shrug.) Meanwhile, Hans Gruber – the greatest villain name of all time – sees a news report that connects Holly Gennaro to John McClane, which in turn puts McClane at risk. Holly is kept with Gruber, while all the rest of the hostages get taken to the roof. But PHEW! McClane forces the hostages to leave the roof right before the helicopters land, averting the deaths of hundreds. The explosion does destroy the helicopters and the FBI agents inside (conveniently eliminating one complicating thread).

McClane surrenders to Gruber in order to save Holly… and he is about to be shot, but snags a weapon taped to his back, and injures Gruber and kills another of the robbers. Gruber slams through a window, but grabs on to Holly to keep from falling, or to bring her with him… either way. And pulls his gun up to shoot them but McClane unclasps her watch, and with that he falls to his death. At the last second, Karl, one of Gruber’s henchmen, ambushes McClane, but is killed by Powell.

Die Hard is probably my favorite action movie of all time. Cranking through my brain to think of all the possibilities… the only contender might be Alien? Or maybe the more en par play would be Aliens. Dunno. But yeah, Die Hard in my mind, is next level good. Why? Because it is tightly focused. It basically is Aliens for action hero movies. It’s in a single building. There are bad guys. There are hostages to be saved. And there are different factions that all have to be balanced and navigated. McClane needs to consider the NY Police, Powell a beat cop who was busted down from detective after an accident involving a kid. There is the FBI and their focus on standard operating procedures. And then there is McClane, the NYC cop who is in the wrong place at the wrong time. It’s an indictment of law enforcement as an unthinking and plodding law enforcement solution in comparison to our trust for the individual cop who makes decisions on the fly to save the day.

Die Hard also gave bud guys more credit. Hans Gruber was a bank robber playing it like he was a terrorist. He assumed the American response as a terrorist would guarantee him and his team immunity as a bank robber, and that law enforcement would be too slow moving to figure out what was happening in time. It is a response to America becoming so big business and so formal that it stops caring about individual people. And here comes McClane, the super hero that we need to help save us from the unthinking and mindless trend of our bureaucratic automatons. Or something. McClane is the cop America needs.

I love showing my kids my favorite old school movies. Why? Because it really makes me rethink what 20 years has really done to our brains collectively. You’d be surprised at how the editing styles of modern movies effect how a movie feels, and how we think about it. Color correction… titles… all of these details communicate. And my son hated Die Hard. He thought it was cheesy and unrealistic. Which, is a fair comment. But his favorite action movie is Live, Die, Repeat, and that is realistic? No, but the fast cuts, amazing CGI, and the ULTRA-COMPLICATED plot just lit his cortex on fire. He loved everything about it. Which, is really interesting to me.

So maybe my attachment to Die Hard is emotional? And yet, I still watch it every few months. I like to put it on in the background while I work. It is just the perfect action movie in my mind. It’s not stupid. And yet, it’s fun. It does enough character development to care about McClane and his wife. (She is the smart one in the relationship, but she still a damsel in distress?? OK, so that is lame.) But you’ll be hard pressed to convince me there is a better action movie out there than Die Hard. Maybe I should do best THiNC. Action Movies list…. I’m sure Live, Die, Repeat (Edge of Tomorrow) will end up at the top of the list.

There you have it! Die Hard. Pretty great title to make it to the Top 100 Movies of All Time. Want to see the other movies I’ve already covered in the top 100 list… check them out right here.