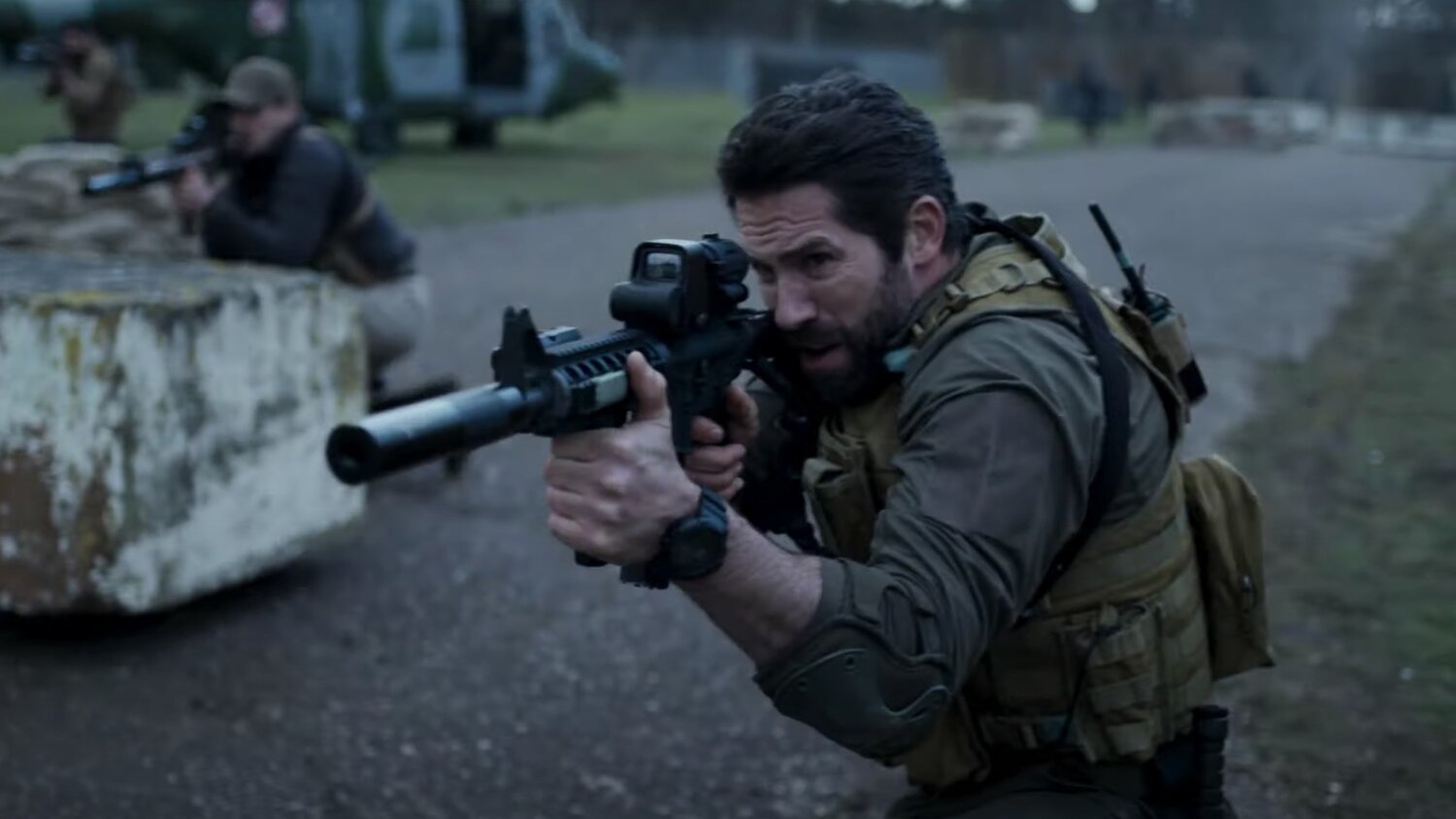 One Shot Movie Takes One Shot Movies to the Next Level. Yes, THiNC. does love introspective and thought-provoking movies. It also likes to investigate mindjobs and crazy films that right hook you when you don’t see them coming. Documentaries that make you reevaluate your life choices. Dramas that force you to consider new ideas and complicated twists. You get the idea. One Shot is NOT one of those movies. And I refuse to take any crap for it. What One Shot does that other movies cannot, is provide an action movie in one continuous and fluidly “single take.” “One Shot” is in the same ballpark with movies like Birdman, 1917 and others that hide their cuts in clever look-aways. IE… Follow, follow, follow, look at wall, cut, look at wall, follow follow… you get the idea.

But it doesn’t even have to be an entire movie that flips me out… even Haunting of Hill House’s you know…17-minute-long single take was mind blowing. Or that MIND BLOWING single take episode of Mr. Robot! (Think it was Season 3, episode 5). Or Silent House, another 87-minute-long looking take. (I recently watched that movie thinking it was The Night House. Come on… Silent House, The Night House… basically the same. (One released a month ago, the other released 10 years ago… but whatever. Silent House was actually all shot in a single house, and made it all feel even tripper. Probably should write Silent House up because it was a fun little ride that you might really enjoy. But Silent House, and other’s like it really don’t even hold a candle the level on single shotness going on here, and the special effects and orchestration necessary to do this level of action. Pretty amazing.

As a side note, personally, pretty stoked. My daughter recently purchased these led lights for her bedroom and her bathroom that got me to thinking. Wonder if they would work well in my entertainment center for passive light while watching movies? Insert the standard family arguments about having this lamp on, or that hall light on, etc., etc. Well, all that crap went away when I purchased the best LED RGB strip lights ever. Colors, brightness, etc. Personally I like the soft whites. But check them out over on Lepro. Might revolutionize your entertainment room like they did mine.

Where was I? Oh right, the walk through of One Shot.

Yeah, there really isn’t a lot to say here. An envoy and group of Navy Seals come to get a detainee at a detention center island. Why? They suspect that a bomb attack is coming and this particular detainee has material information as to the details of the threat. Simultaneously, a (nearly infinite number) group of jihadists attack the facility. Why? Well, to get that one particular detainee that might know something. Huh. Okay. Why? Dunno. That is the point of the movie, A) to keep the detainee alive and B) to find out how to thwart the attack.

So yeah, this isn’t a Nolan screenplay here. I’d even argue that some of the 24, Jack Bower screenplays were better, and more well scripted than this one. This is a movie I so wouldn’t have given two minutes to… minus the gimmick of the single shot. Why? Mainly because of the storyline payoff…

Where were we? Attacks in D.C. – dirty bombs to disable all three branches of government simultaneously. (Seems like they had plenty of time to evacuate, I mean how long did it take them to fly down here, and get the guy? Oh, and spend all day fighting for their lives? They had plenty of time to get the Justices, the Representatives, the Senators and the President out. But let’s not think about that.) And we have one detainee with information about the location of the bomb. (How long has he been detained here? Is it in one of his shipping containers? How would he still know? Why would they rely on his setup? His work? If he were detained at an INTERROGATION CENTER?) Regardless, our analyst, Zoe Anderson (played by Ashley Greene, you know, from Twilight.) is so certain of this she gives her life for this intel. As she is dying, she passes on a key bit of data about the key detainee. He lost a son in one of our drone strikes, but his wife is pregnant. With another son! It can be like the other son never existed! And our hero Jake Harris (played by Scott Adkins) now has that one key bit of intel that will save the day. Sure enough, as the bullets slow, and the last two people standing are our detainee, Amin Mansur (played by Waleed Elgadi – who was glorious in the movie Mosul, which is basically this movie but with real context, real characters, and real purpose) and our hero, Jake is able to let Mansur know that he is a father again. And with that, Mansur decides to put down his gun and willingly help America out, to do the “right thing.”

Thoughts on One Shot

So yeah, the writing is trash. But, One Shot definitely attempted all the standard Guantanamo references to water boarding, the immoral ethics of it all, etc., etc. and for that I am truly grateful. One Shot is a clever one-trick action pony. If you are half as intrigued as I am to watch a movie like this, to see if you can find a cut technically, you might have some fun with it. It might be worth your time. You definitely shouldn’t be staying with it for the writing payoff, or the finding of the bomb. That’ll all be in Two Shot! hahaha. As our hero and our detainee head off in a helicopter, we wistfully watch the sky and wonder, nay, hope, that our glorious republic are in safe hands! Cough. Cough-cough.

Again, I was sucked in by the technical achievement of it all. And come on! Watching this movie is like watching a finely tuned ballet. An intricately detailed play that is allowed to leave the confines of its stage. Personally? I think I only saw two cuts? I really didn’t see a lot. Maybe there were 10. I literally can’t find information about the movie because the movie title is the technical name for a movie with only one cut. And all those references point back to 1917, which is the biggest one shot movie of the last decade.

Other One Shot Movies Worth Your Time

My personal favorite, ACTUAL one shot movie, is the film Victoria. I even got a chance to chat with the cinematographer of that film in a fantastic little interview about how they pulled it all off. You can read that interview right here. A two hour (longer?) movie that happens to have a bank heist in the film… and real characters worth caring about. A real story worth going on the ride for. I really loved Victoria. You can find Victoria and your streaming options here:

Silent House as I mentioned above, is another film worth your time. You can watch Silent House at one of these streaming services below:

Okay, look. This film was more gimmick than actual brilliance. BUT, if you want a movie more like the action, and the feel of this one, not the technical One-Shot-ness of it anyway… then you probably would like the movie The Outpost. It’s literally the same movie, but real. Actually based on real history, etc. Or, maybe you should definitely should check out Mosul, which I mentioned in the write up. Loved Mosul… such a great film. You can watch Mosul at these streaming locations: