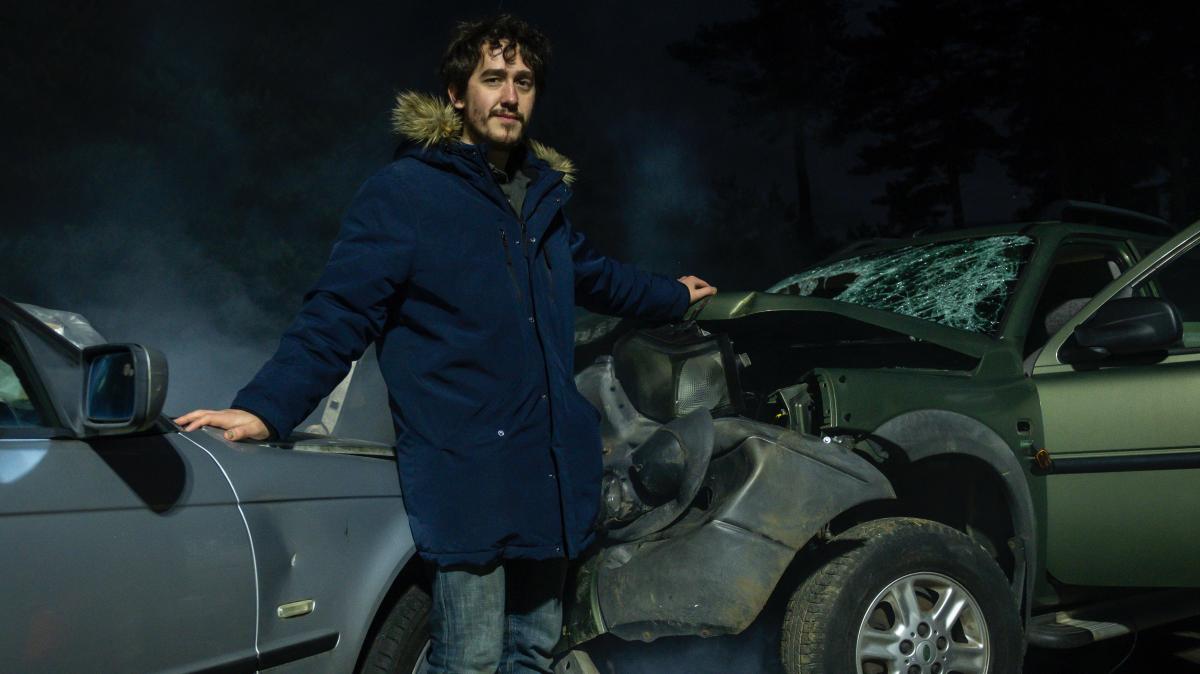 Dashcam is The Height of Indie Camp-Greatness

Dashcam is The Height of Indie Campy Greatness. Back in the middle of the Covid lock down – we were treated with a brilliant idea for a movie. A group of friends have a seance of sorts, over zoom, and … chaos. Right? I actually watched it with my friends OVER ZOOM. It was hilariously fantastic. One of my favorite memories from the lock down. (It’s funny, my family successfully navigated the lock down, and avoided getting Covid, until this week. Seriously. My wife, my youngest daughter, and today, on my birthday of all days!, my son tested positive! gah! But they’ve all gotten the vaccine and are boosted, so they are, or will be, pulling through just fine, I hope. I still have yet to get it… so, fingers crossed.)

But today! Rob Savage, the wunderkind behind The Host, is bringing us another run in with the paranormal. I gotta say, first of all, this movie will not be for most people. It is WIDELY hated for the lead character’s annoyingness, and the structural chaos of the film. Also, it is hated for its handheld cinematography. Oh, and its hardcore violence will probably scare most away as well. And to the final few standing here still? The abysmal ratings over on Rottentomatoes will send you packing – as of this writing, an audience score of 33%! What?!? in heaven’s name, is THiNC., a purveyor of only the finest, and most reputable Hollywood backed films, in Dashcam’s corner for? (Said with the thickest infused sarcasm imaginable). Well, I’ll tell you what… you watch this crazy film, and you tell me that you didn’t enjoy the wild ride, and then we can talk afterwards.

I will unabashedly say I loved this film. I love indie film makers that take their iphone out into the rain, purchase a trashed car or two, and just make mayhem happen on screen. So, kudos to Mr. Savage for swinging for the fence. Keep swinging sir, keep swinging!

There really isn’t much to walk through with this one. But there is sanity to be searched for. So maybe as I spell out the basic framework of the movie, we can see if we can piece together what is going on here. Fair enough?

Annie (Annie Hardy) is a really horrible vlogger. Let’s just be honest and open about this fact. Annie is just randomly videoing herself as she works for uber eats or something. (Is that what she’s doing? There is little to no exposition to confirm. But it feels like that is what she was doing anyway.) She sings random rap/made-up lyrics on the fly for her watchers and she goes and visits a friend (Stretch, played by Amer Chadha-Patel) and his wife, who, most obviously hates her. Anyway, it’s probably the world’s worst ever show. (And probably 90% of the reason most people hate this movie – but it’s lameness actually adds credibility to the movie in my mind… but whatever.) Eventually she heads to a restaurant to pick up a food order, the lights are out, and there definitely isn’t an order to be picked up. So Annie just has some fun with it, she helps herself to some food and continues laughing with her viewers. But when the owner comes out and offers her cash to deliver a sick woman, Angela (played by Angela Enahoro – I love how super low budget indie movies can’t even be bothered to change the character’s names from real life! hahaha. Or maybe it lends a more realistic vibe to it? Like this actually happened to Annie?) to a specific address Annie eventually agrees to the new task rabbit task.

Things go all kinds of collectively pear-shaped when the woman gets sick in the back of Annie’s car (I refuse to go into details here) and Annie takes the woman into a store bathroom to try and clean her up. But when someone comes looking for Annie and the woman (I think?) we begin to get the first indications that this old, sick, and frail woman, is more than she appears to be. The man chases Annie, and Annie leaves the woman behind… and eventually she is able to knock the guy out and make a run for it. Annie’s friend Stretch shows up to help Annie, after having been watching her stream and seeing the attack. The woman, randomly appears again in the back seat of Stretch’s car, and Annie works to get Stretch up to speed on the chaos that’s (just started) happening.

From here on out – it’s just craziness piled on top of craziness. But I loved this old African American woman who was driving all the action. Was she benevolent? Was she Chaotic Neutral? Was she friendly to Annie, for her help, and no one else? Did she want to kill Annie? That was the nuance that really kept me in this horribly campy, low-tech, horror show.

They get chased into the woods – Angela is found up in a tree… and then… hovers her way back down to the ground. There are tons of crazy, fantastic, scary bits littered throughout this film. Angela’s powers sort of come out, bit by bit, as we learn just how scary, and just how powerful she really is. What is wrong with this woman? What is happening? Eventually, Stretch and Annie find Angela’s mother… and apparently, Angela is sixteen? This is confirmed by the Arianna Grande tattoo that she has that just didn’t add up for an old woman.

Eventually Stretch and Annie have a bad car accident with a couple that had just been married. (This is where the movie veers back and forth into the world of camp fire horror story craziness.) Woods, running, hiding, craziness, and Annie comes to a huge house. There in the house Annie stumbles into some sort of occult, or zombie, or who knows, thing, where she witnesses a ton of people slit their throats in unison. (What was that all about?) Stretch is killed somewhere along the way. To be honest, there is so much running, and craziness, I lost track. But eventually, Annie kills Angela. YAY! We win! But then, out of Angela’s mouth, climbs out a sort of octopus kind of alien. Which, chases Angela back to the cars, where she eventually bludgeons it to death with her electronic keyboard. Which, I just found funny if extraordinarily illogical. I mean, this alien creature could levitate for heaven’s sake. It could explode things with its mind! But maybe it was in a weakened state outside of a host!? hahaha. Who knows. Who cares!?

Thoughts on the Film Dashcam

What happened in the movie Dashcam? I don’t know. An Alien infested the earth and chased Annie around until Annie was eventually able to kill it? Maybe? Are there good aliens and bad aliens warring? Or were they always coming for Annie? No idea. And, you know what, that’s what I love about limited perspective movies (Cloverfield comes to mind here) because they just strike me as way more authentic. But maybe it just annoys you. Dunno. But I also enjoy movies where things are left unexplained or vague. That just works for me. But if you want answers, and you’d like a narrator to show up at the end of each of your movies and tell you what to think about conclusion of the movie… Dashcam is not going to be a movie you like. Right? Yeah. Sorry about that! hahaha.

I had a blast with this movie though. Why? Because Annie was an idiot MAGA spouter. She is intentionally annoying. Her streaming show is terrible. And yet, in the middle of it, all this craziness happens. Some woman, with crazy powers, chases her, and almost kills her. That’s the extent of the plot. Stay alive. Okay. And if you throw enough ‘what the heck’ at me along the way (which this movie definitely did) then I’ll remain intrigued. So kudos to Rob Savage (the writer and director of Host) and Annie Hardy for this little gem of a fright film. I loved it.